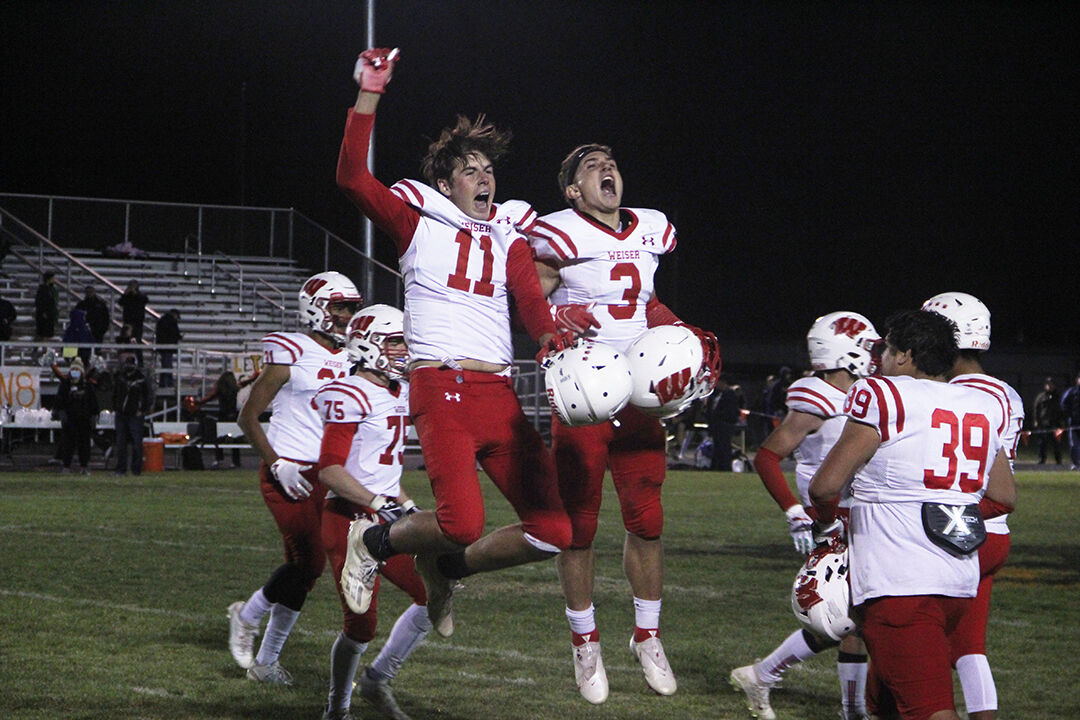 Weiser's Ray Calley (11) and Jack Burke (3) celebrate the Wolverines' win over the Grizzlies on Friday. 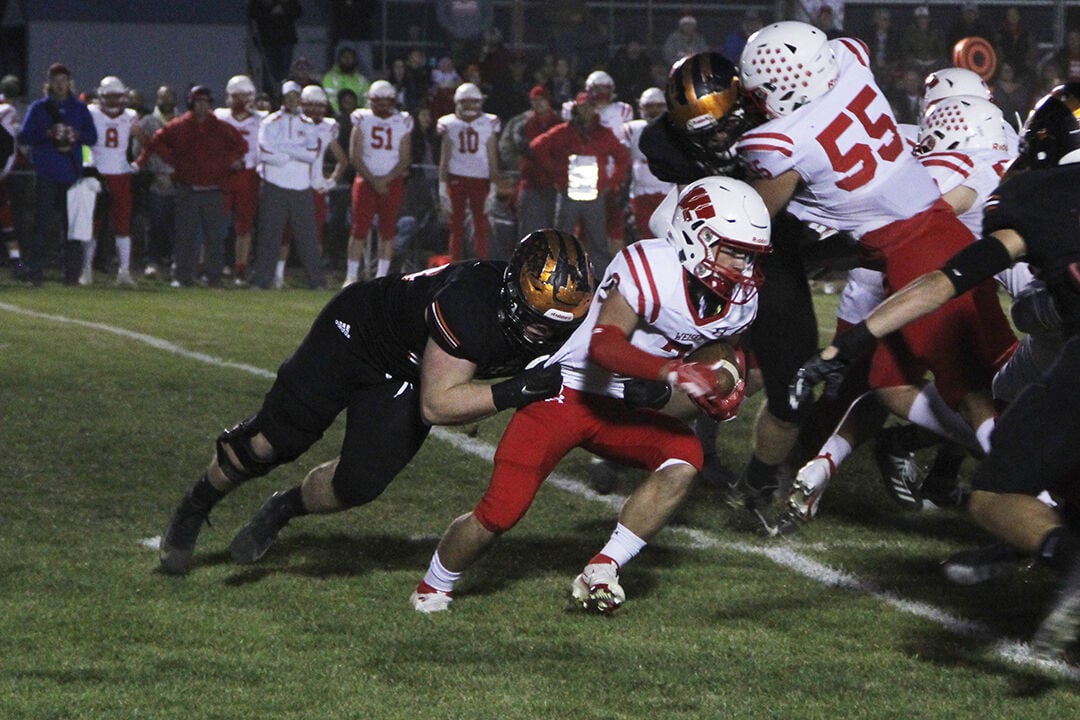 Weiser's Jack Burke, right, carries the ball while Fruitland's Weston Jeffries tries to tackle him for a loss. 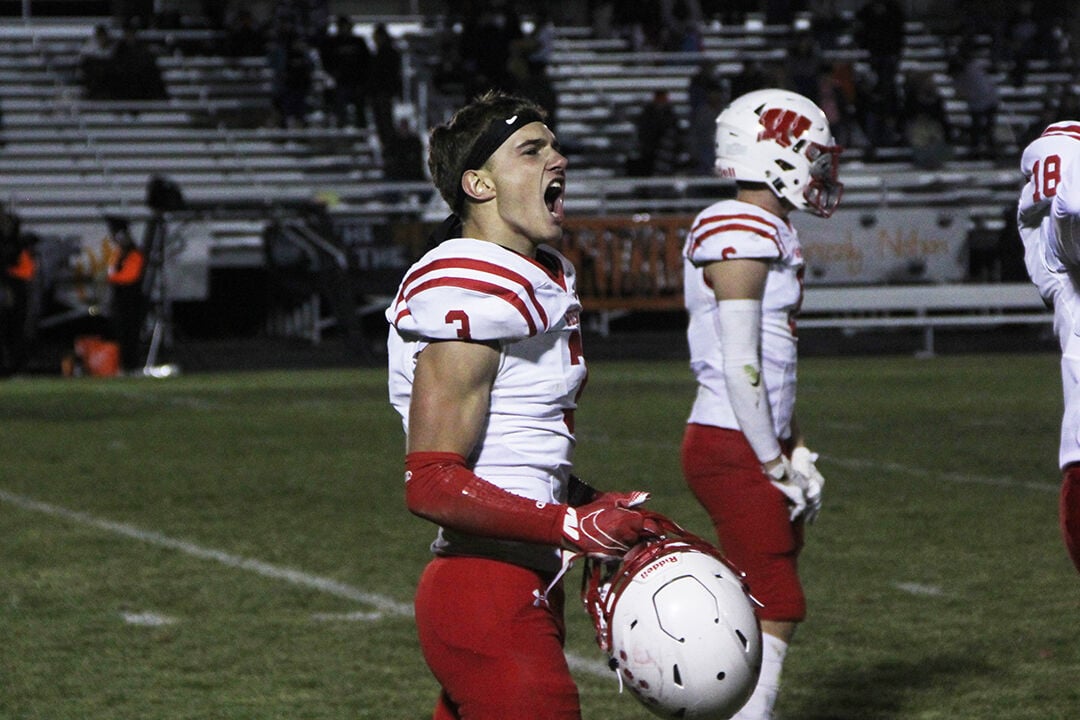 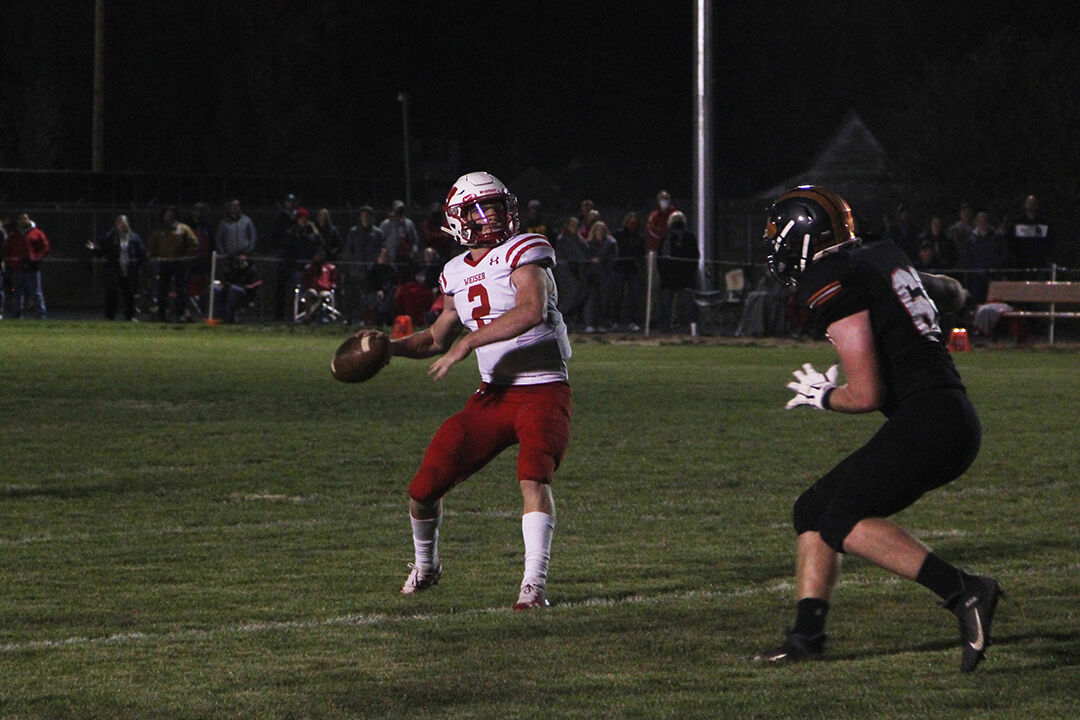 Weiser's Brett Spencer (2) prepares to throw the ball while being pressured by Fruitland's Greg Gissel.

Weiser's Ray Calley (11) and Jack Burke (3) celebrate the Wolverines' win over the Grizzlies on Friday.

Weiser's Jack Burke, right, carries the ball while Fruitland's Weston Jeffries tries to tackle him for a loss.

Weiser's Brett Spencer (2) prepares to throw the ball while being pressured by Fruitland's Greg Gissel.

On Sept. 25, the Fruitland football team celebrated a hard-fought win over their Snake River Valley conference rival Weiser. The loss dropped the Wolverines to 1-3 and capped off a three-game losing streak that could have sent Weiser into a free fall.

But since that loss to Fruitland, the Wolverines are on a 4-1 streak with the sole loss coming by three points to Homedale (one of the top teams in the state). And on Friday, the Wolverines got their revenge in a big way, taking advantage of good field position for a decisive 42-0 win over the Grizzlies in a state play-in game.

But how did the Wolverines go from dropping a tight contest with Fruitland to a drubbing victory in just a month? Third-year head coach Tom Harrison said the Wolverines have started to play a physical brand of football that leads to that success.

“We understood that we had to be more physical,” Harrison said. “And we’ve been doing that. We entered the game healthy. And we’re really starting to find ourselves as a team. Finding out who we are. We are a team that’s going to play physical football and use the weapons that we have at hand.”

Senior Kooper von Brethorst said the Wolverines were humbled early in the season and have been all business down the stretch.

“We have our heads down right now and we’re just digging in,” von Brethorst said.

Senior lineman Beau Shields added that the Wolverines have fully committed to the game plan.

“We’re all buying in right now,” Shields said. “And now we’re the type of team that’s going to run it down your throats. We just have to keep buying in.”

One of the big issues for Weiser in the Sept. 25 matchup was the line play, which meant the Wolverines could not get the running game going. Shields said the line has been focusing on explosiveness, which paid dividends on Friday.

“We’ve been practicing a lot of our downfield blocking and just getting off the line faster,” Shields said.

Von Brethorst really made his presence known on Friday night. On offense, the slot receiver had one reception for 16 yards and a touchdown. But as a defensive back, von Brethorst was a nightmare for Fruitland’s offense, pulling in two interceptions.

It was unknown if von Brethorst would be available for the Wolverines this year, as he suffered a leg injury during the preseason. During the Sept. 25 game against Fruitland, von Brethorst said he was maybe at 55%, but now says he’s feeling great.

Brett Spencer completed four of five passes for 88 yards and three touchdowns. He also carried the ball seven times for 55 yards and a touchdown. Spencer did not finish out Friday’s game, exiting in the third quarter after being sacked. Sam Kerner replaced Spencer under center for the final quarter.

For the whole game, Weiser started drives an average of 41.3 yards away from the end zone.

The win means the Wolverines (5-4) will be in the state tournament, which will be seeded when the play-in round is over. The Grizzlies’ season ends with a 6-2 record.

With the Wolverines looking strong down the stretch, Harrison said the team has to maintain its focus heading into the state tournament.

“To come into their place and put up 42 and shut them out, that speaks volumes,” Harrison said. “This is a good win for the program. This Fruitland line is as good as I’ve seen. And we were able to beat them at their game tonight.”

The Wolverines held Fruitland to 137 total yards, and shut the Grizzlies out for the first time since the two teams met in 2019 (a 35-0 Weiser win).

With momentum on their since, von Brethorst and Shields agreed that there’s no reason why the Wolverines shouldn’t be in the hunt for a state championship.

“Once we get hot, there’s no looking back,” Shields said. “We’re not the same team we were in week four.”