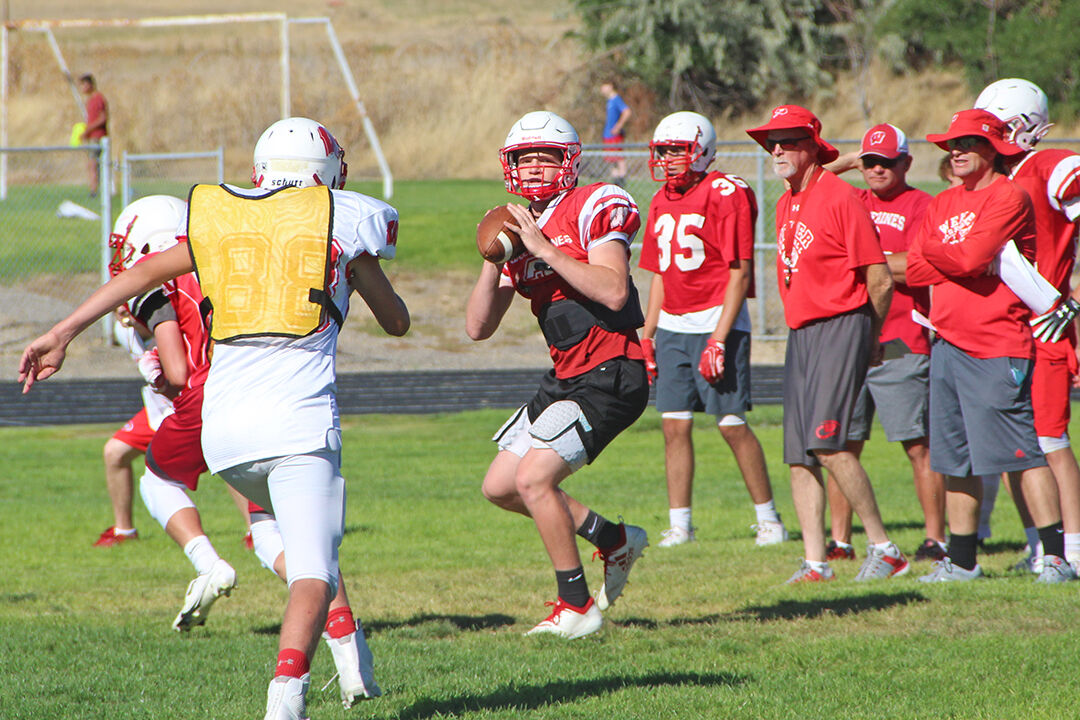 Weiser quarterback Brett Spencer drops back to pass during a play in practice on Tuesday. A junior, Spencer will be entering his second year as the Wolverines' starting quarterback. 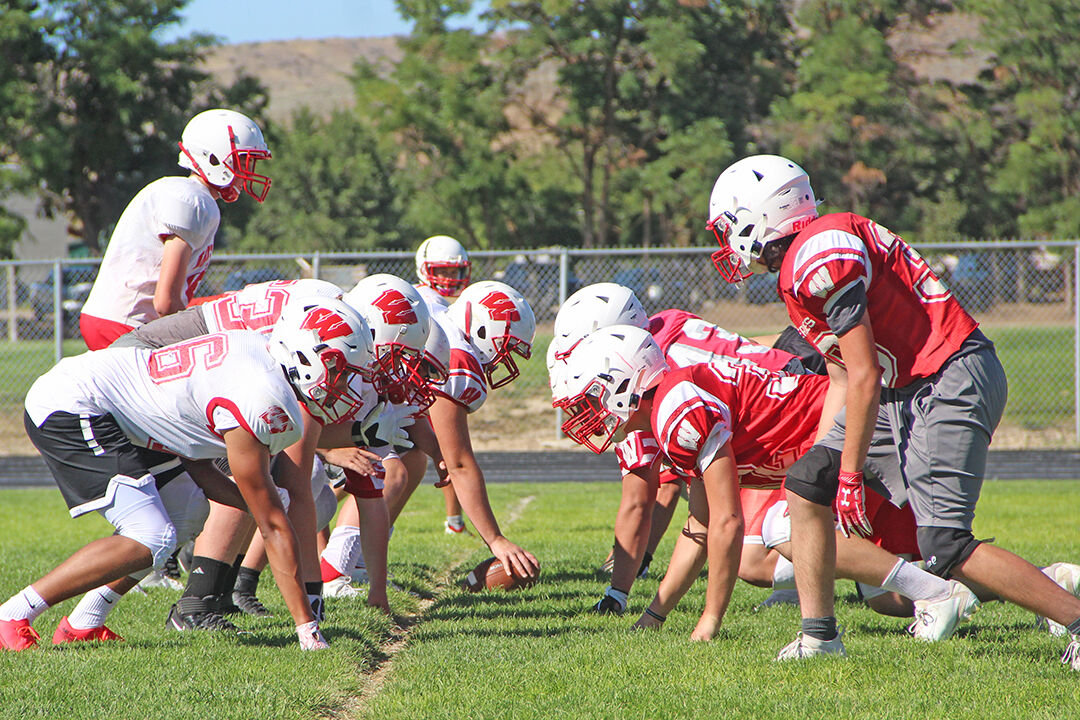 Member of the Weiser football team line up before a play during practice on Tuesday. 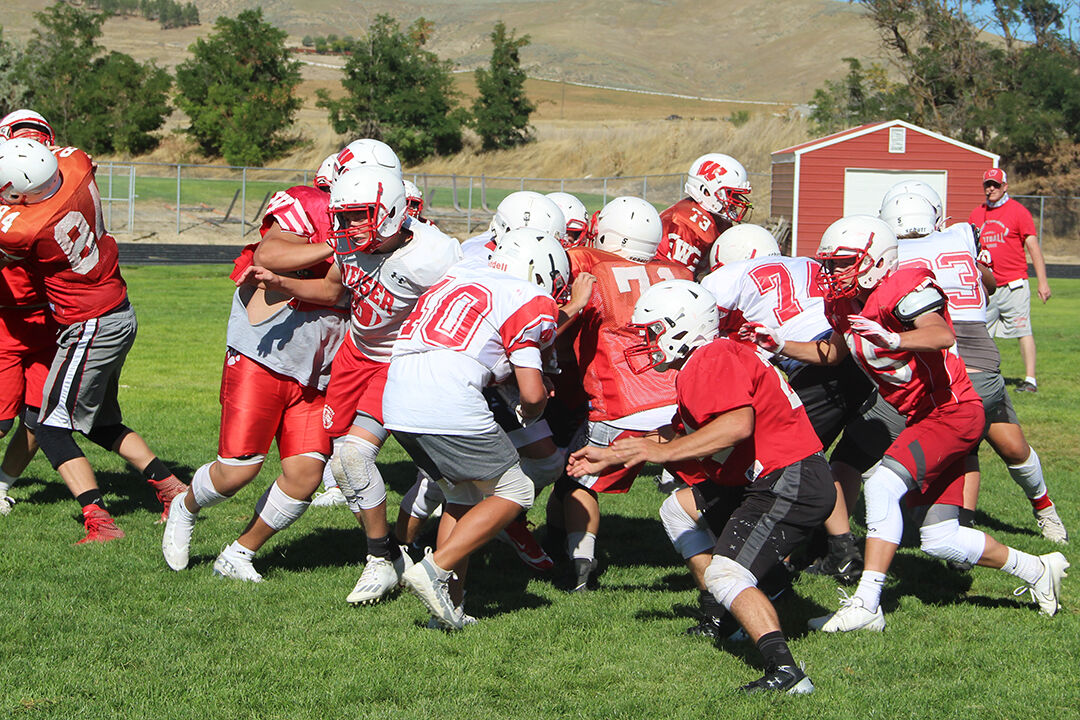 Members of the Weiser football team run through plays during practice on Tuesday. 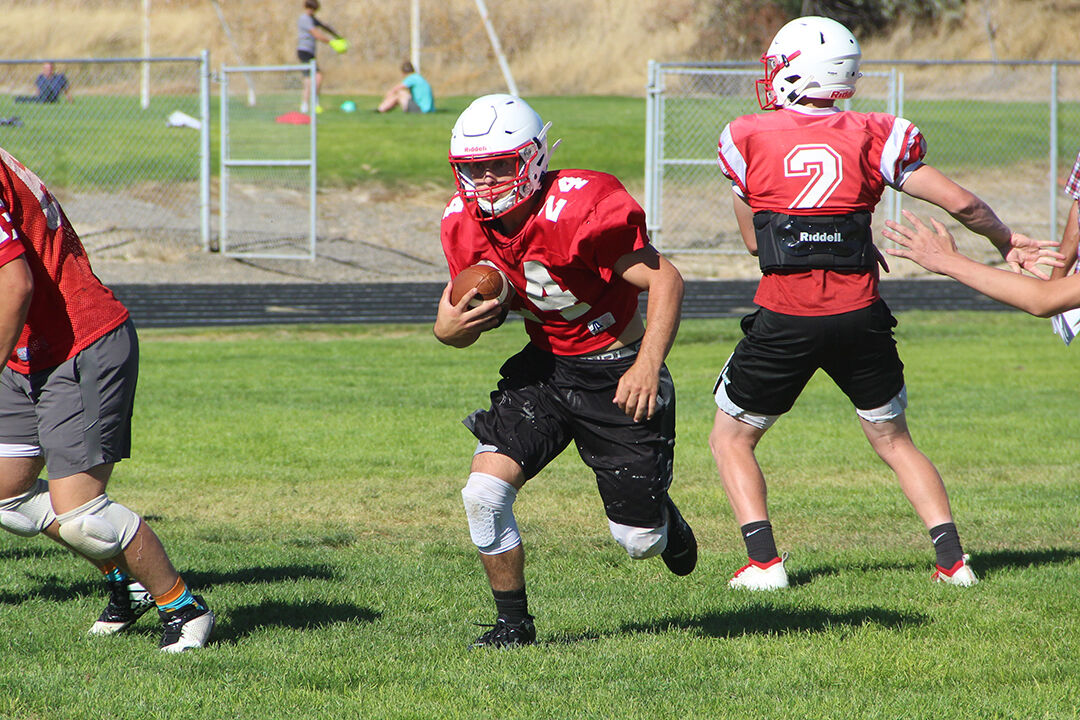 Weiser running back Willy Shirts carries the ball during practice on Tuesday.

Weiser quarterback Brett Spencer drops back to pass during a play in practice on Tuesday. A junior, Spencer will be entering his second year as the Wolverines' starting quarterback.

Member of the Weiser football team line up before a play during practice on Tuesday.

Members of the Weiser football team run through plays during practice on Tuesday.

Weiser running back Willy Shirts carries the ball during practice on Tuesday.

Hot on the heels of one of the program’s best seasons in 10 years, the Weiser football program is looking to continue the upward trajectory its been on since Tom Harrison took over as coach two years ago.

In getting ready for his third season at the helm, Harrison said he still wants to work on getting the defense stronger (which was the No. 1 point of emphasis for the 2019 season). The Wolverines allowed a season-high 42 points to Timberlake in the state quarterfinals, which cost Weiser a second chance at playing eventual state runner-up Homedale.

“We felt like we could have won that and gone to the semifinals,” Harrison said. “It felt like we really shot ourselves in the foot in that game.” We wanted to give ourselves another shot at Homedale and Homedale’s a really good team.”

Earlier in the season, Homedale beat Weiser 34-14, but Harrison said that game could have been a lot different if it weren’t for Weiser mental errors.

“We want to build on last year, where you make it to the quarterfinal game, but then you don’t make it to the semis. So this year, we expect to do a little bit better,” Harrison said. “The tools are here. The guys are here. They’ve been working really hard and we’ve done a lot of stuff this summer.”

With a matchup with Fruitland on Sept. 25 and Homedale on Oct. 16, Harrison said the key for the Wolverines this season is staying healthy down the stretch.

Veteran at the helm

Coming into his second year as the Weiser starting quarterback, Brett Spencer (a first team all-Snake River Valley selection as quarterback and defensive back last fall) is looking to grow after a strong sophomore campaign.

Spencer said he’s been working on pretty much every aspect of his game this summer, especially in his decision making.

“I’ve been trying to work on my mental part of it. Trying to know when to throw it out of bounds and when to run it. Because last year, I was kind of throw-happy in situations where I should have just run it. Just try to keep the ball and not turn it over and make the right decisions.”

In the season opener against Buhl on Friday, Spencer completed seven of 11 passes for 126 yards, three touchdowns and one interception. He also carried the ball eight times for 48 yards and one touchdown.

Coming into the season, one question mark was who would be the Wolverines’ receivers. Caleb Harris, a tall deep-threat, was one of Spencer’s favorite targets last year while Tim Reed, a reliable tight end, was also always there to pick up yards. The Wolverines are also going to be without senior slot receiver Kooper von Brethorst for a while as he suffered a leg injury.

But Harrison said the Wolverines didn’t have to wait for long to see who would step up as a receiver this year, and its someone who Spencer knows very well.

A freshman, Brock Spencer had two catches for 37 yards and one touchdown against Buhl.

“Brock Spencer showed up and made some really nice plays against Buhl,” Harrison said.

Brett Spencer said he’s feeling confident that the two brothers will be a strong duo for the next couple of years.

“He’s probably caught a couple thousand balls of mine. Just from training,” Spencer said. “He’s my guy for those situations.”

Bryce Crimin was also a reliable target for the junior wquarterback, racking up three catches for 62 yards and two touchdowns.

Harrison said he is also hoping to get more production out of Ray Calley at receiver.

When it comes to running the ball, the Wolverines have a crew of players that they will be looking to. Juniors Willy Shirts and Jack Burke are both back to help with the load of carrying the ball.

In Friday’s game against Buhl, Shirts had 12 carries for 56 yards while Burke had 45 yards on four carries. Also picking up yards on offense was Michael Youngberg, who had six carries for 50 yards.

“We’ve got a lot of dudes that can handle the ball,” Spencer said. “We’ve got guys like Jack Burke and Willy [Shirts] and Eric [Torres] and Brock [Spencer] and all those guys can handle the ball really well. We’re just trying to spread the ball out and get it to our ballers. That’s what will help us the most.”