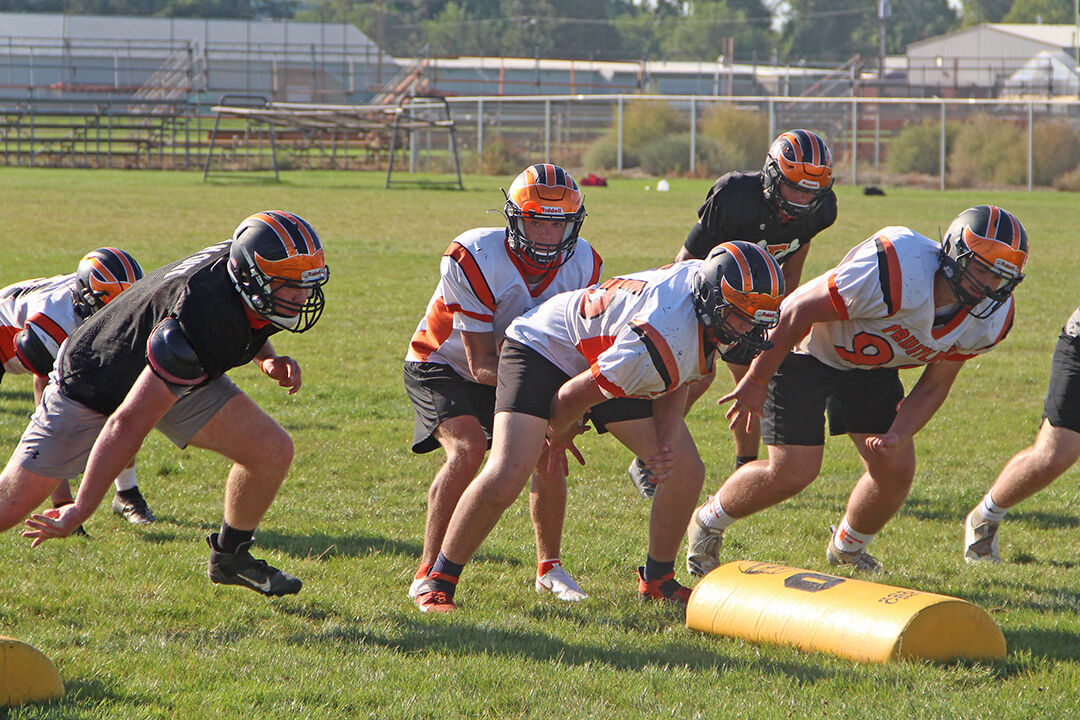 Fruitland quarterback Luke Barinaga, middle, awaits the snap during a walkthrough at practice on Wednesday afternoon. 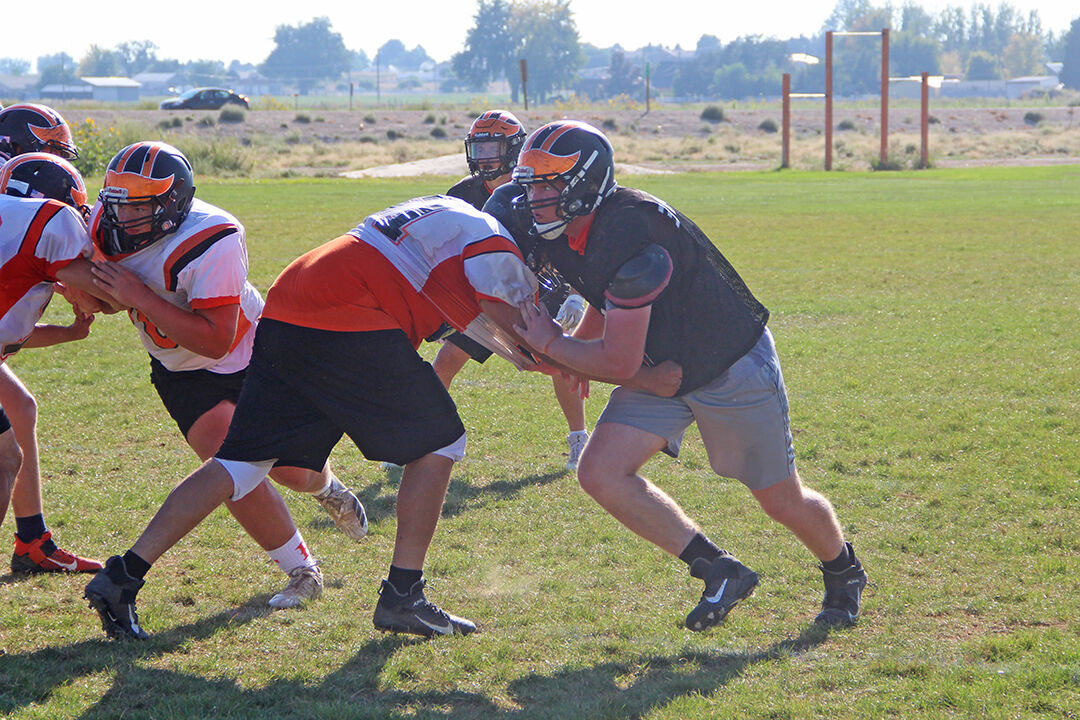 Fruitland senior Greg Gissel attempts to get around a teammate during practice on Wednesday. Gissel will be one of the senior linemen leading the Grizzlies this fall. 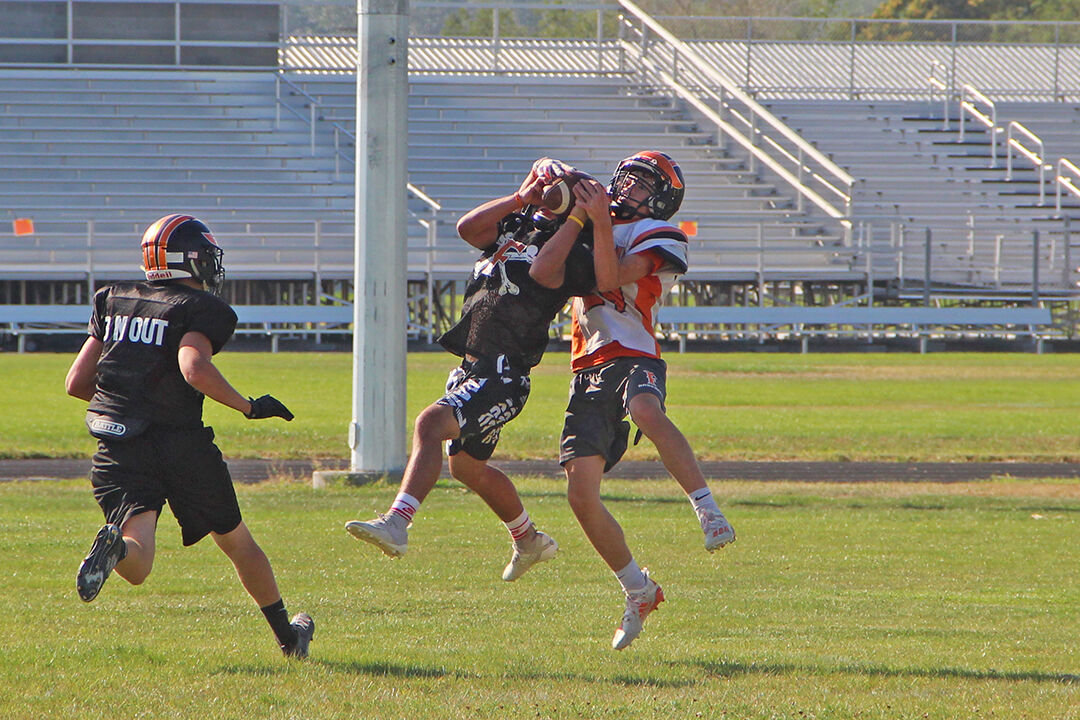 Two Fruitland players jump for a pass during practice on Wednesday. 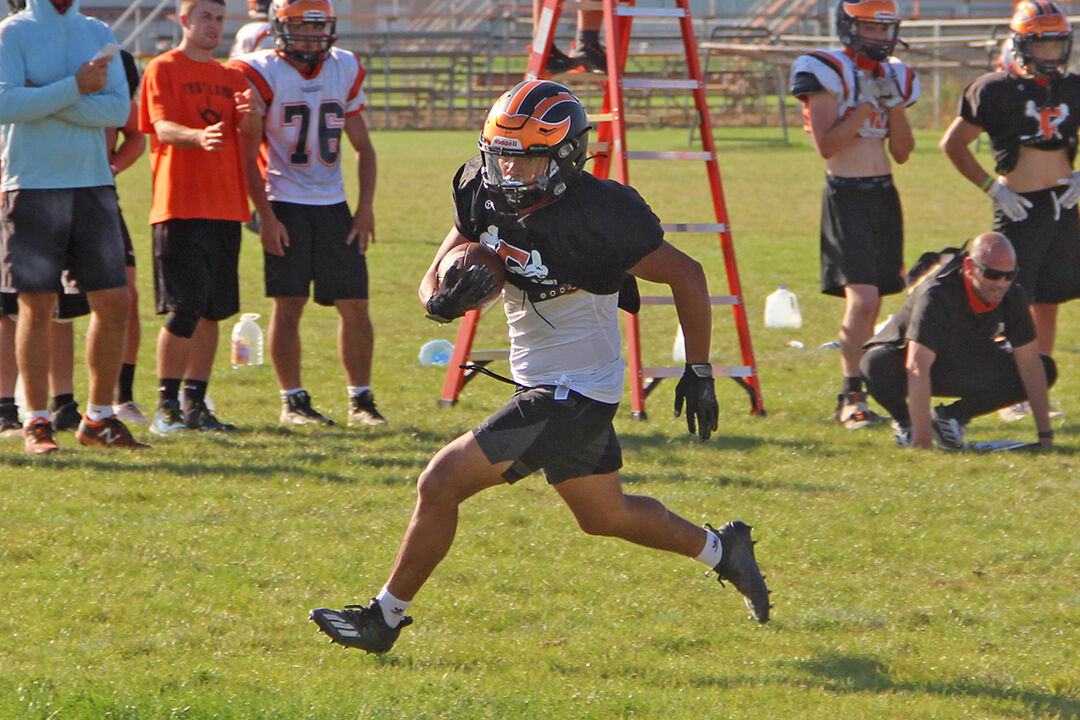 Fruitland running back David Juarez carries the ball during practice on Wednesday.

Fruitland quarterback Luke Barinaga, middle, awaits the snap during a walkthrough at practice on Wednesday afternoon.

Fruitland senior Greg Gissel attempts to get around a teammate during practice on Wednesday. Gissel will be one of the senior linemen leading the Grizzlies this fall.

Two Fruitland players jump for a pass during practice on Wednesday.

Fruitland running back David Juarez carries the ball during practice on Wednesday.

One game into the 2020 season, the Fruitland football team came home with a big win over Melba. The Grizzlies picked up a grinding 373 yards on the ground, with three players getting double-digit carries, numbers that make veteran Fruitland fans smile.

In 2020, the Grizzlies will be again relying on a veteran offensive line that coach Ryan Tracy is excited to have leading the march.

“That’s our strength,” Tracy said. “We’re really trying to focus in on that and use them as the backbone of our team. You know, when we’re really good, those guys are really good. So we’re just focused in on that.”

The Grizzlies will be led on the line by seniors Weston Jeffries (all-SRV selection on both sides as a junior) and Greg Gissel. Jeffries said he is feeling back to 100% after suffering a knee injury as a junior that kept him out of wrestling.

“The biggest thing that’s helped us mature is just understanding our assignments,” Jeffries said. “The physicality hasn’t really changed. We’re a little bit bigger since last season. A little bit stronger. But for the most part, I think this year the difference in our line is knowing what we’re doing on the field.”

And Tracy has good reason to be focused on the play of his linemen. Veteran play on the line was crucial in the Grizzlies’ back-to-back state championship wins in the 2016 and 2017 seasons. And Tracy said he sees a lot of similarities between those linemen and the 2020 crew.

“I’ll be honest, I think our line could be as good as we’ve had,” Tracy said. “Obviously, we’re not there yet. But those lines weren’t there at the beginning of the year. They just had to get better each week. So the potential is there. You look at size and speed, and years of experience with that offensive line, they’re just as good as those other groups. It’s just, how much will they develop through the year and are kids going to stay healthy?”

And another place where the Grizzlies have a lot of veteran talent is at running back.

Leading the pack are seniors Jacob Walker and Dylan Stelling, both having varsity experience from last season.

“Our running backs were solid,” Tracy said. “All week, Jake Walker ran really strong. Then Dylan showed a lot of speed around the edge. Our fullbacks are Aden [Simmons] and Hunter [Forbes] and both those kids ran really hard.”

“All those guys, we’re excited about them,” Tracy said. “People don’t really know so much about them, per say, as running backs because they haven’t had the big numbers in the past few years. But I really think those guys can be big contributors down the stretch and produce big numbers for our team.”

One new face on the field for Fruitland will be Luke Barinaga, who is taking over as the Grizzlies’ starting quarterback.

A sophomore, Tracy said Barinaga is a really strong dual-threat option for the Grizzlies.

“He’s a 4.0 student and you just have to tell him once on things,” Tracy said. “He throws a really good ball and he’s a really athletic kid.”

In Friday’s game, Barinaga completed two of seven passes for 54 yards and one touchdown.

He also carried the ball four times for 40 yards.

Tracy said he believes that Barinaga could be the fastest quarterback in the Snake River Valley conference this year, which would add an extra dimension to the Grizzlies’ classic wing-T offense.

Working on defenseThe Grizzlies opened the season with a 36-32 win over Melba, which saw Fruitland fight off a big comeback from the Mustangs after taking a 28-14 lead into halftime.

The Mustangs outscored Fruitland 18-8 in the second half, with Melba missing a point after kick and failing two two-point conversions (if Melba is successful on those three attempts, the Mustangs would have won the game).

Tracy said the biggest thing that the Grizzlies had to take away from the game against Melba is working on the defensive secondary. Melba completed 13 of 21 passes for 181 yards, two touchdowns and one interception.

The Grizzlies are on the road at Nampa Christian and at New Plymouth for the next two games. On Sept. 25, Fruitland will host Weiser to open the SRV schedule.

The Grizzlies’ regular season finale will be at Homedale on Oct. 23, and Jeffries said Fruitland has every reason to feel confident going into those big matchups.

“As long as we’re taking every day and getting a little better at practice, by the time we see the teams like Weiser and Homedale, I think that we’re in that matchup,” Jeffries said. “I don’t think there’s any reason why we should count ourselves out of that matchup.”