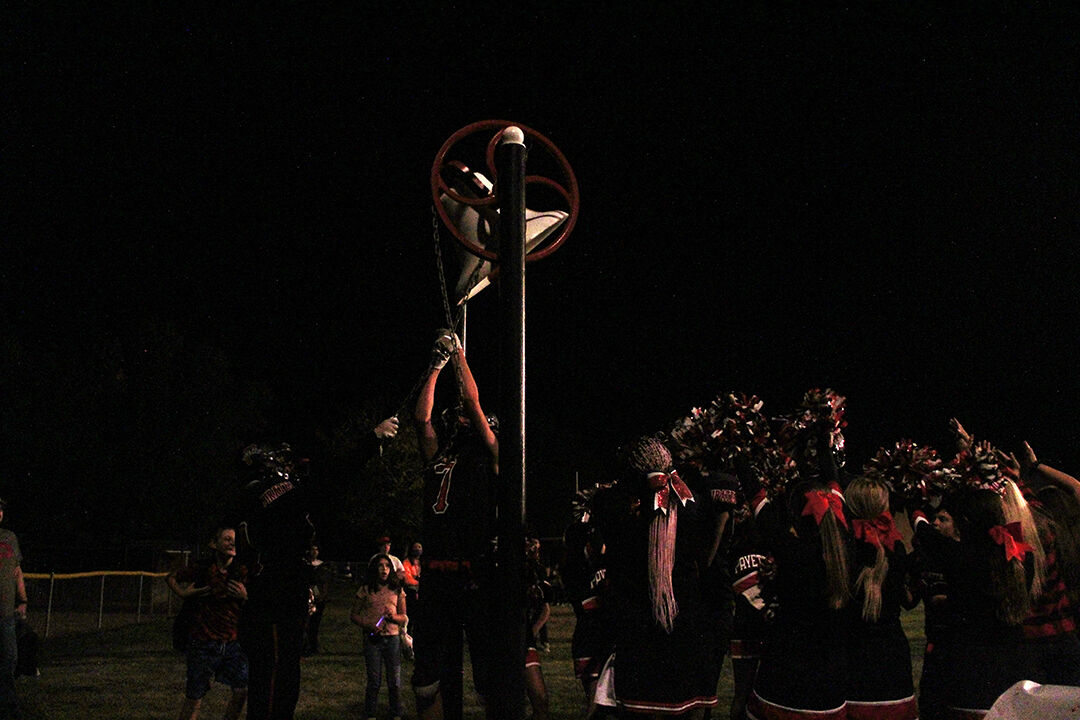 Members of the Payette football team ring the victory bell after winning Friday's game against Marsing. 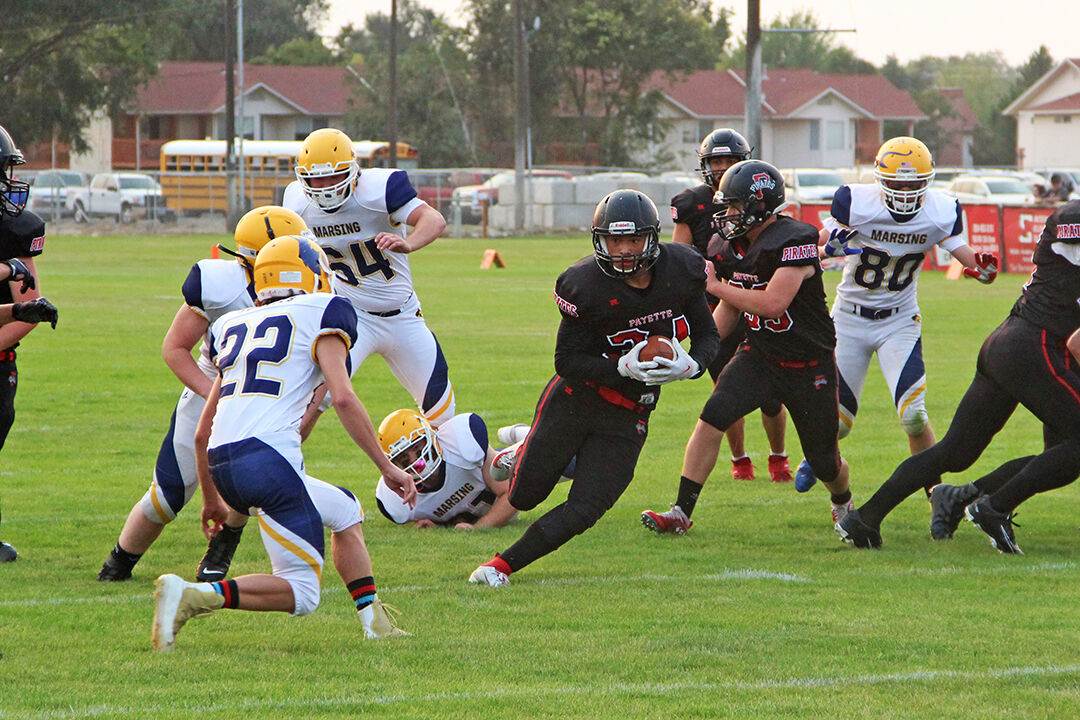 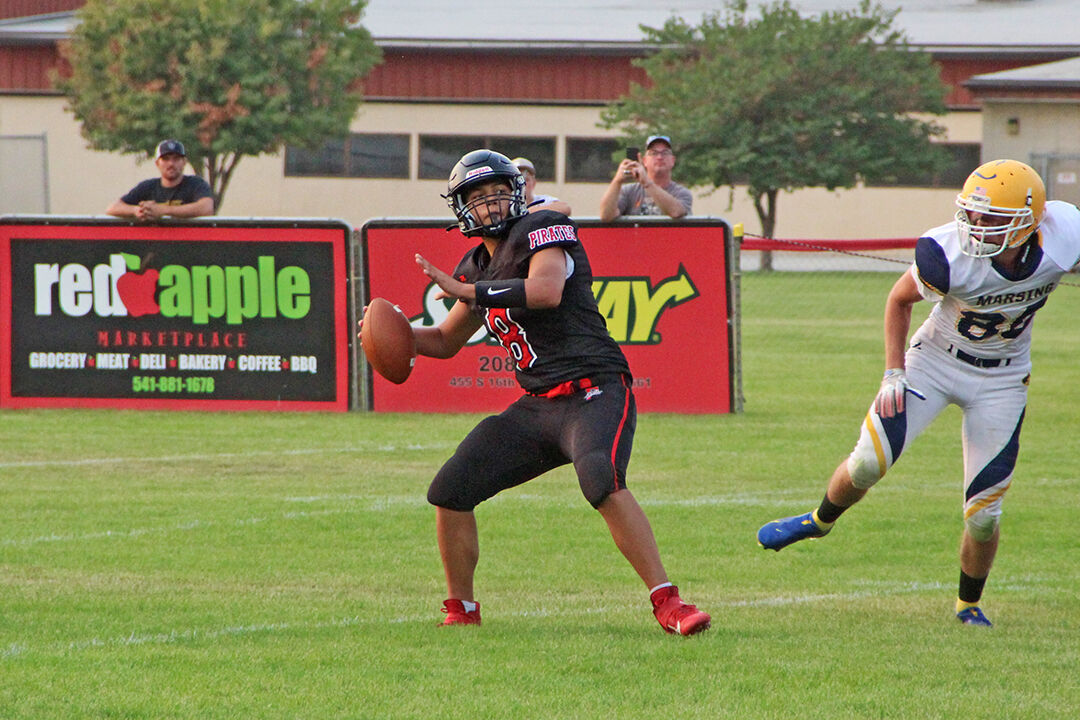 Payette quarterback Abe Rodriguez (8) winds up for a throw. 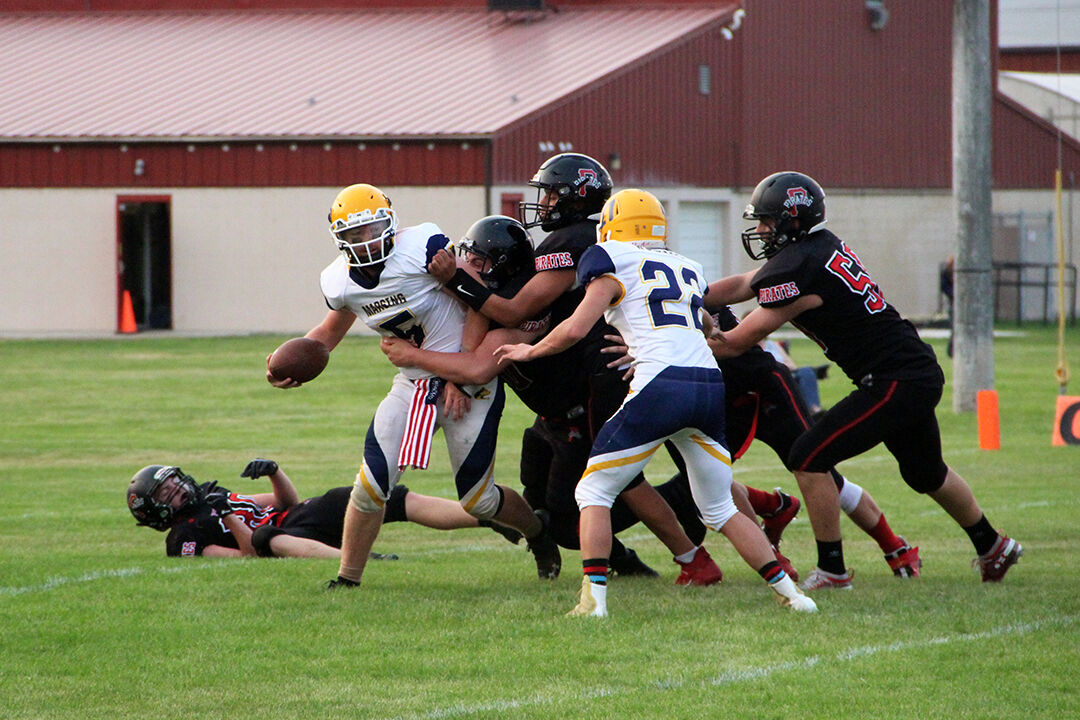 Members of the Payette football team gang up on Marsing quarterback Kolton Scott for a sack.

Members of the Payette football team ring the victory bell after winning Friday's game against Marsing.

Payette quarterback Abe Rodriguez (8) winds up for a throw.

Members of the Payette football team gang up on Marsing quarterback Kolton Scott for a sack.

People in Payette who went to bed early were likely woken up to the sound of the victory bell coming from Payette High School, as the Pirates picked up a dominant 34-16 win over Marsing on Friday night.

“You don’t know how happy we are for you guys,” Payette coach Kip Crofts said to the team after the game. “Go smile. Go enjoy this.”

The win was Payette’s first in almost a full calendar year, as the Pirates’ last win came against the Huskies, on Sept. 13, 2019.

Just two weeks prior, the Pirates were at home and missing the opening week of the season (a game against Cole Valley Christian on Aug. 28) as the team was quarantined after players had potentially been exposed to people with COVID-19.

After getting a win two weeks into the season, Crofts said it was good to see the players come together after starting the year behind the rest of the state.

“I’m completely elated,” Crofts said. “I’m just excited for the kids. As coaches, we see the turmoil they go through. We see the struggles. And it makes you feel really good inside for them when you see how happy they are.”

Gabe Ramos was the workhorse for the Pirates on Friday. The sophomore running back had 20 carries for 114 yards and three touchdowns against the Huskies.

“It feels great,” Ramos said on the win. “We just compete. We got to practice and we worked harder and harder each day and it showed.”

Following the Pirates’ season-opening loss to New Plymouth, Ramos said the team has been working hard at practice, and that was the different in Friday’s game.

“Even if we’re having a bad day, we always just go one hundred percent,” Ramos said.

Crofts said he saw a lot of improvements in the offense from last week’s loss at New Plymouth, where a couple of errors on offense kept the game from being a little closer.

“I believe we get better and better every day,” Crofts said.

While the score indicates a one-sided contest, the Pirates struggled to contain Marsing’s offense in the second quarter. The Pirates stuffed the Huskies’ I-formation running attack in the first quarter, leading Marsing to move to more looks out of the shotgun formation while opening up the field.

With the change, Marsing quarterback Kolton Scott was able to complete a few passes and the Huskies were able to find more success in their rushing attack.

But Payette tightened up the defense at halftime. In the second half of Friday’s game, Marsing ran 21 plays on offense, gaining a total of 12 yards, while Scott completed just one of 13 passes for -1 yard.

The Pirates will host Wendell on Friday, who Marsing beat 38-11 on Sept. 4. If the Pirates beat the Trojans, they will have two wins on the season for the first tine since 2014.

“I’m so excited for that game,” Ramos said. “We can compete harder and we can win that game.”