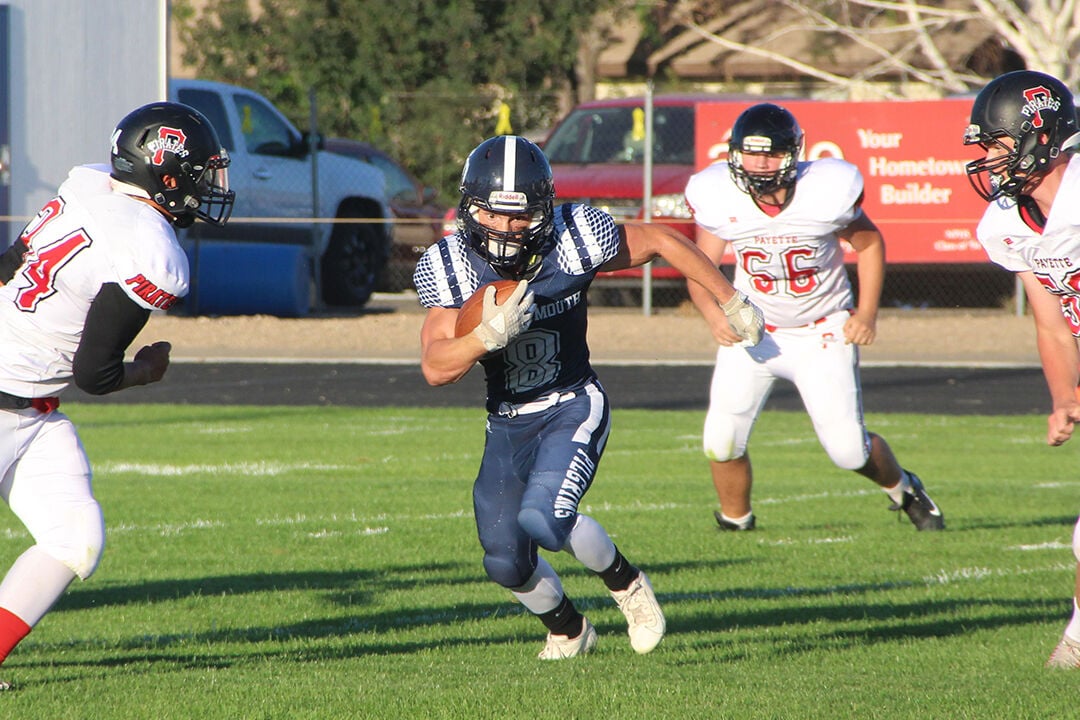 New Plymouth's Erin Vian carries the ball during the Pilgrims' win over Payette on Friday. 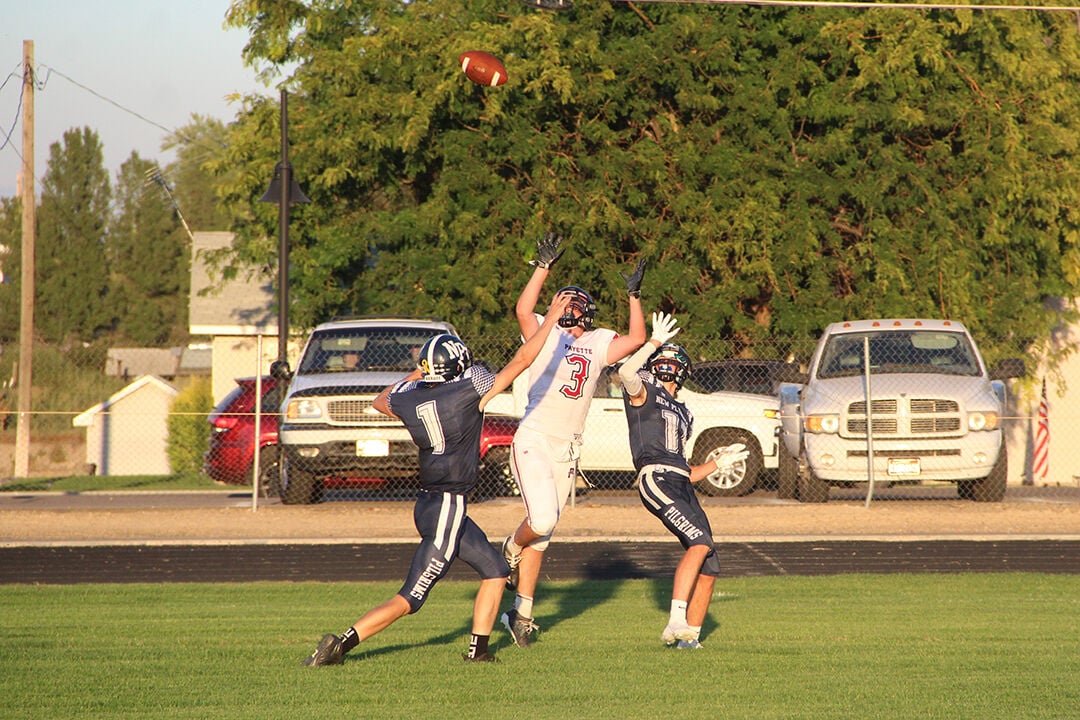 Payette's Zander Allen (3) jumps to grab a pass while being double covered by New Plymouth defenders. Allen would make the catch for a touchdown. 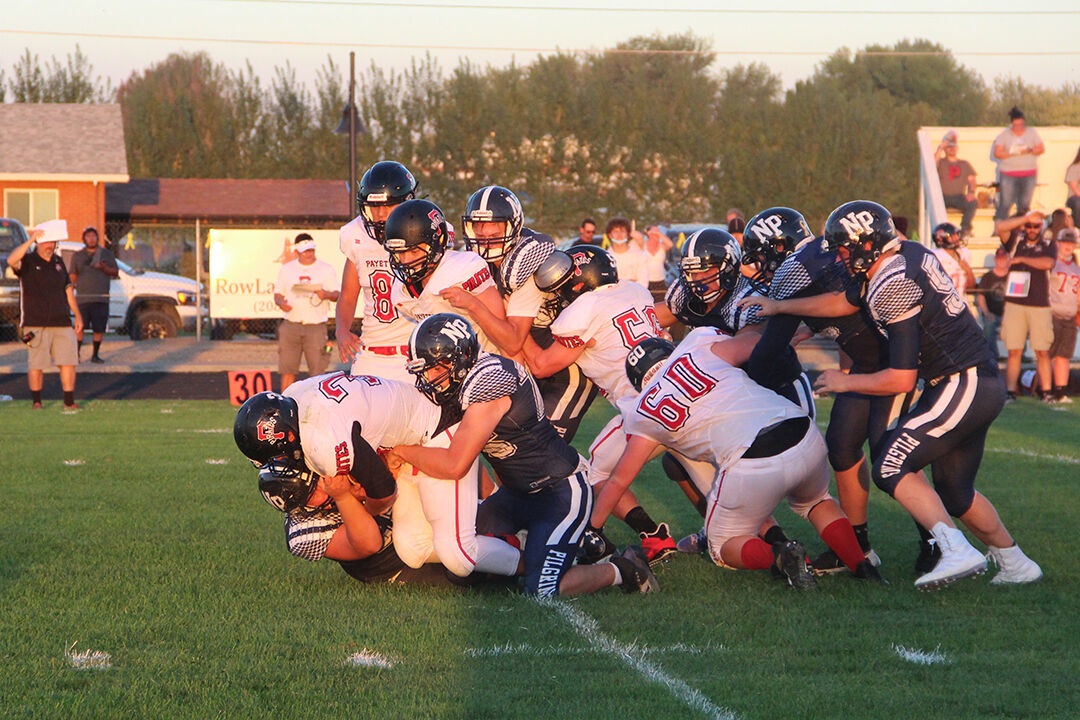 New Plymouth's Erin Vian carries the ball during the Pilgrims' win over Payette on Friday.

Payette's Zander Allen (3) jumps to grab a pass while being double covered by New Plymouth defenders. Allen would make the catch for a touchdown.

With a pounding rushing attack, the New Plymouth football team once again came out on top in the annual battle for Payette County supremacy with Payette. This time, the Pilgrims came out on top 48-7 for their seventh-straight win over the Pirates.

Following the opening week win against Parma, New Plymouth coach Dallan Rupp said the offense was sometimes out of sorts in its new double wing scheme.

But on Friday, the Pilgrims were an offensive machine, putting together 504 yards of offense and averaging 10.5 yards per play.

“It looked like we were clicking,” Rupp said. “Whatever we did this last week, the guys understood it. The offense looked more smooth.”

Happy with the way the offense is progressing, Rupp said the Pilgrims need to switch gears to the defensing side of the ball. The Pilgrims allowed 235 yards of offense and struggled at defending the pass at times.

“The offense was a lot better because we focused so much on the offense,” Rupp said. “They didn’t allow too many points, but the defense allowed the ball to get moved on them a lot. We need to focus more on defense.”

For the Pirates, Friday’s game their unintentional season opener. Payette had to cancel its game against Cole Valley on Aug. 28 as the team was quarantined as players could have been exposed to COVID-19 earlier in the season.

So the Pirates were playing their season opener against a New Plymouth team that was in its second week. So when the Pirates gathered at the end of the game, coach Kip Crofts came with words of encouragement.

“I’m proud of you,” Crofts told the team as they huddled up in the south end zone. “You guys did awesome. Completely awesome. You got backed into this situation and you did not back down.”

And while the Pirates were on the losing end of a lopsided contest, Crofts said the team showed a lot of attitude that should go far this season.

“They’re not going to use that disadvantage as an excuse,” Crofts said. “They’re going to fight.”

Offensively, the Pirates made it known that they can air out the ball on Friday night. Sophomore quarterback Abe Rodriguez completed 13 of 35 passes for 152 yards and a touchdown. The lion’s share of those completions were to junior receiver Zander Allen, who had eight receptions for 115 yards and a touchdown.

“There were some really good things that happened tonight,” Crofts said, adding that if there were fewer dropped passes then the Pirates would have been in a closer game.

Allen also had the game’s only turnover, nabbing an interception on defense.

Sophomore running back Gabe Ramos had 17 carries for 47 rushing yards.

“It hurt to leave points off the board,” Crofts said. “Because we had no answer to their offense. But beware, because we are young and if they start gaining confidence. They’re good.”

Payette will be hosting Marsing on Sept. 11. The Pilgrims were originally scheduled to play McCall on the same day, but McCall canceled that game. New Plymouth will be playing at Soda Springs on Sept. 12 instead.

In getting ready for their game against the Huskies, Crofts said the Pilgrims need to work on a lot of basics that they haven’t gotten to because of their quarantined time off.

“We haven’t gotten to spend time on technique and skills yet,” Crofts said. “All we got to do was getting the plays down and getting guys in their right position. We need to get back and work more on tackling and blocking.”