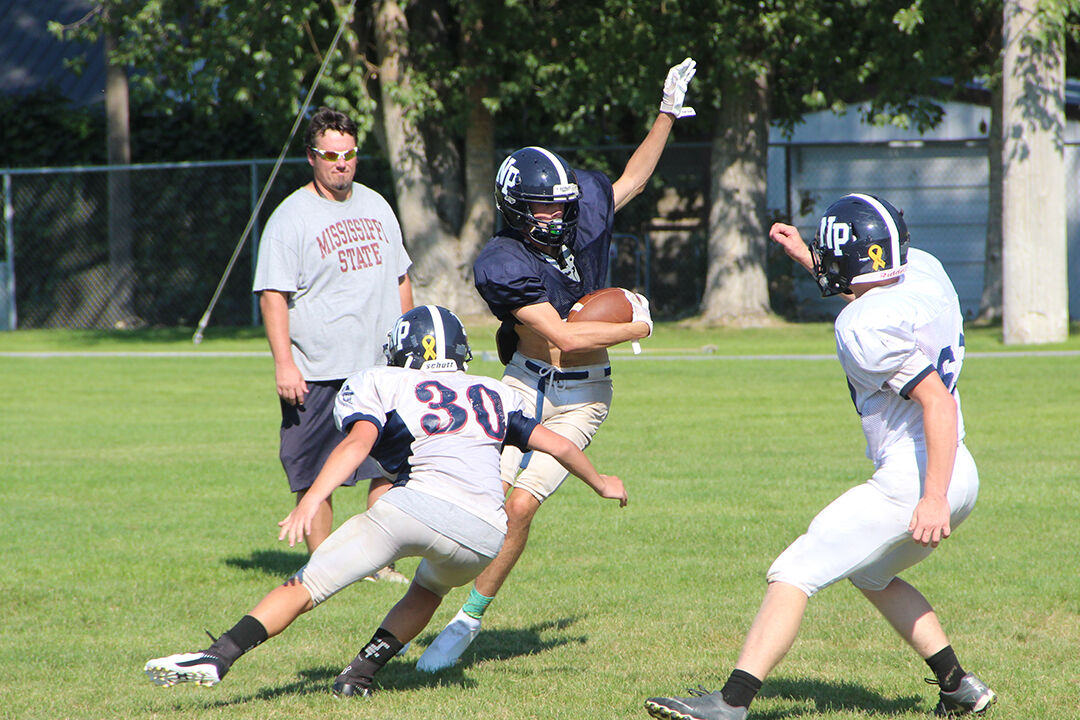 Members of the New Plymouth football team run through a punt return drill. 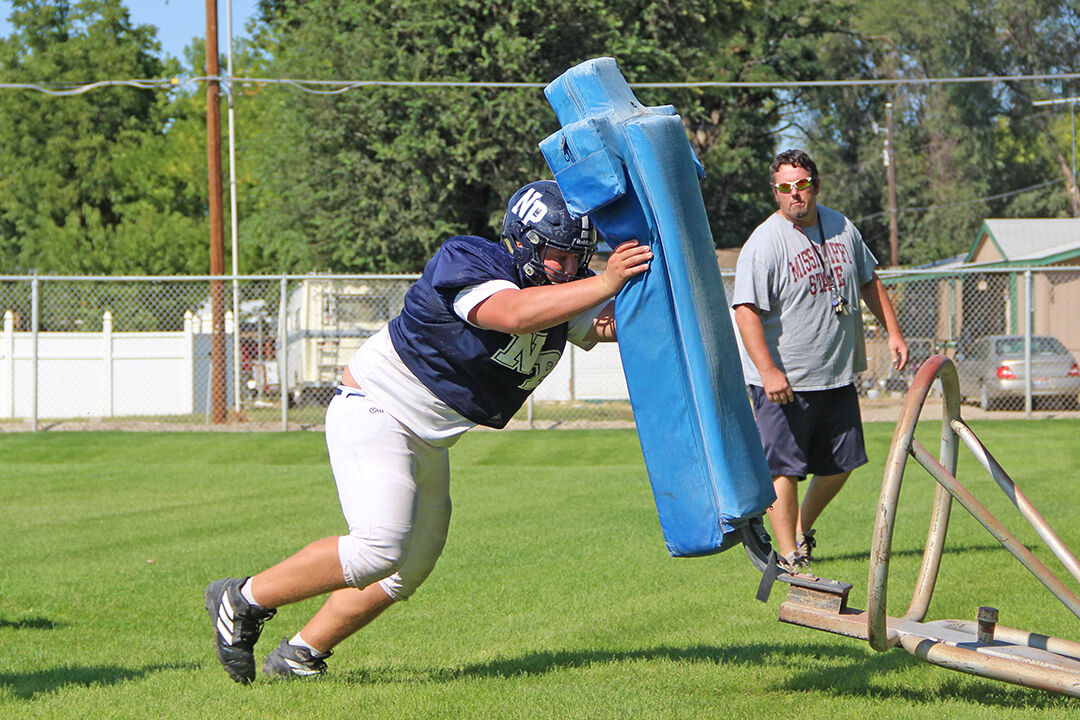 The Pilgrim line will be led by four returners from the 2019 varsity team. 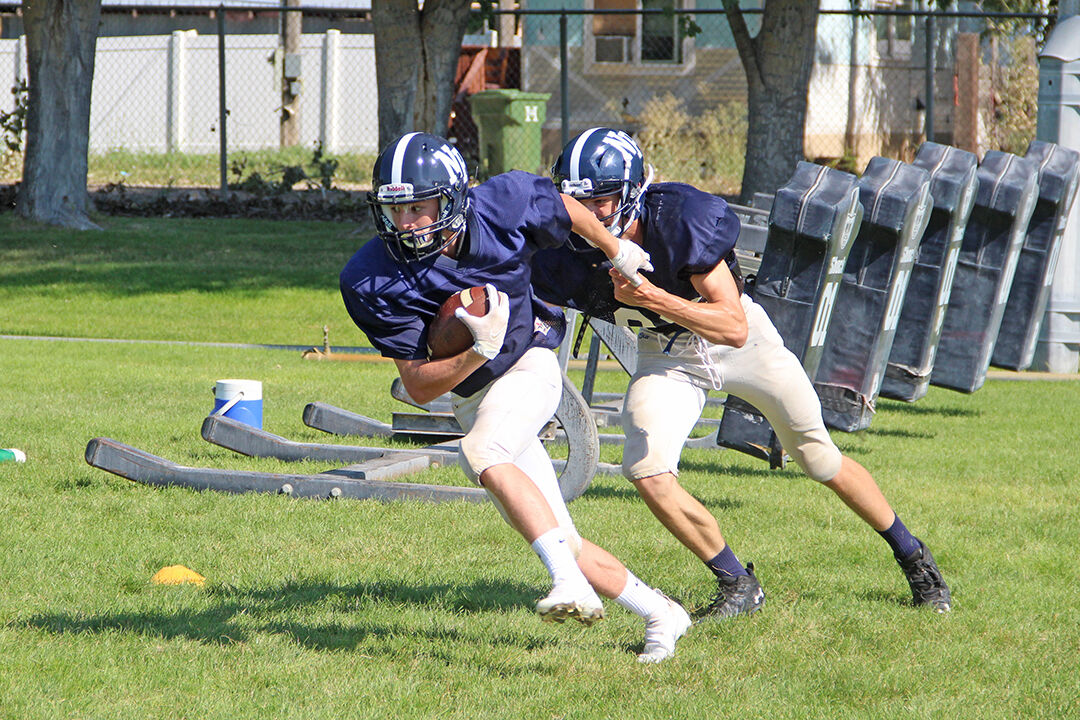 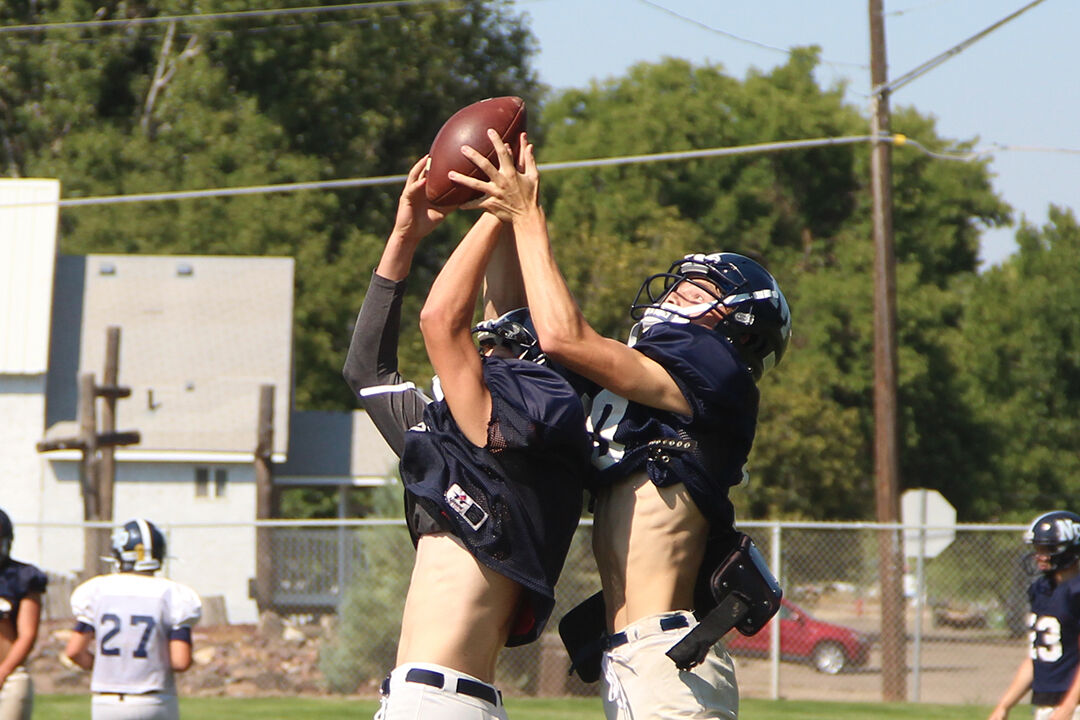 Members of the New Plymouth football team run through a punt return drill.

The Pilgrim line will be led by four returners from the 2019 varsity team.

The New Plymouth football team opened the season on Aug. 28 with a grinding 14-8 win over Parma. The Pilgrims were enjoying a 14-0 lead until the Panthers scored a touchdown (with a successful two-point conversion) in the final minute of the game.

After the game, coach Dallan Rupp knew the Pilgrims needed to double down on something that plagued them the entire game against the Panthers: mistakes.

But Rupp said he was bracing for mistakes in Friday’s game, as the Pilgrims are working on a completely new double wing offensive scheme.

“We have a new offense this year,” Rupp said. “There were quite a few mistakes. The players just didn’t write understand it yet.”

With the double wing, the Pilgrims’ base offense will see all 11 players in the crowded at the line, with one running back, two tight ends and a wing back behind each tight end. The idea with the double wing offense is to create confusion for the defense with misdirection while having multiple players who can carry the ball.

As a result, the Pilgrims will be very run-heavy in 2020. Against Parma, the Pilgrims had 42 offensive plays with 37 of them being rushing attempts.

Erin Vian carried the ball eight times for 51 yards. Javon Lindeman had eight carries for 35 yards and Connor Hawker had five carries for 27 yards. In all, the Pilgrims picked up 146 yards on the ground.

“Right now the plan is to rotate the running backs out quite a bit,” Rupp said. “Right now we don’t have one dude that’s just a lot better than anyone else. So we rotate them and keep them fresh. We’ll be playing to outlast a lot of other teams and just pound the ball.”

Vets in the trenches

And the Pilgrims will be ready for the run-heavy offense with a veteran line that includes four returning starters from last season. The line will be anchored by Joel Campbell, Caiden Cutberth, Hunter Williams and Brock Winward.

“That’s the real strength of the team right there,” Rupp said of his linemen.

Rupp said he’s expecting more production out of the line, especially on offense in future games, as they were not always on the same page in the game against Parma.

“They just didn’t really execute well against Parma,” he said. “We blocked well. It just wasn’t always the right assignments. We’re going to get that fixed and we’ll be able to roll.”

The Pilgrims have senior Casey Arritola playing quarterback this year. And Rupp said he’s got a lot of confidence in Arritola’s ability to be the manager of the offense (as the run-heavy Pilgrims will not be throwing the ball too much).

“He’s good,” Rupp said. “He’ll be in control of the offense. He’s not going to go and make a lot of mistakes and that’s all we want from him. His number one responsibility is to be a communicator.”

While the Pilgrims want to keep the ball on the ground, they did call Arritola’s number a few times. The senior completed four of five passes for 20 yards and a touchdown. The one incomplete pass was a drop, according to Rupp.

“When we needed him, he was there,” Rupp said. “He can deliver it.”