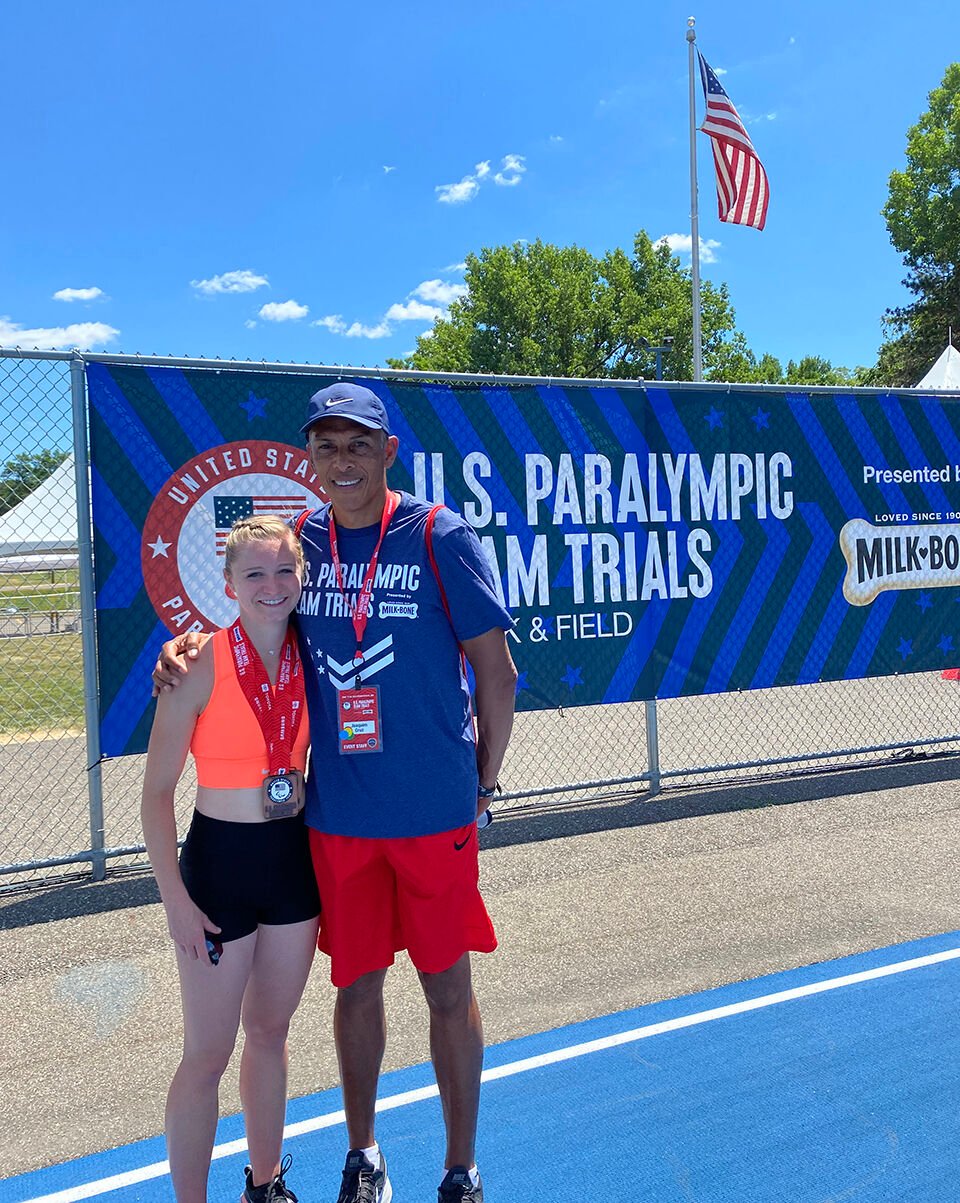 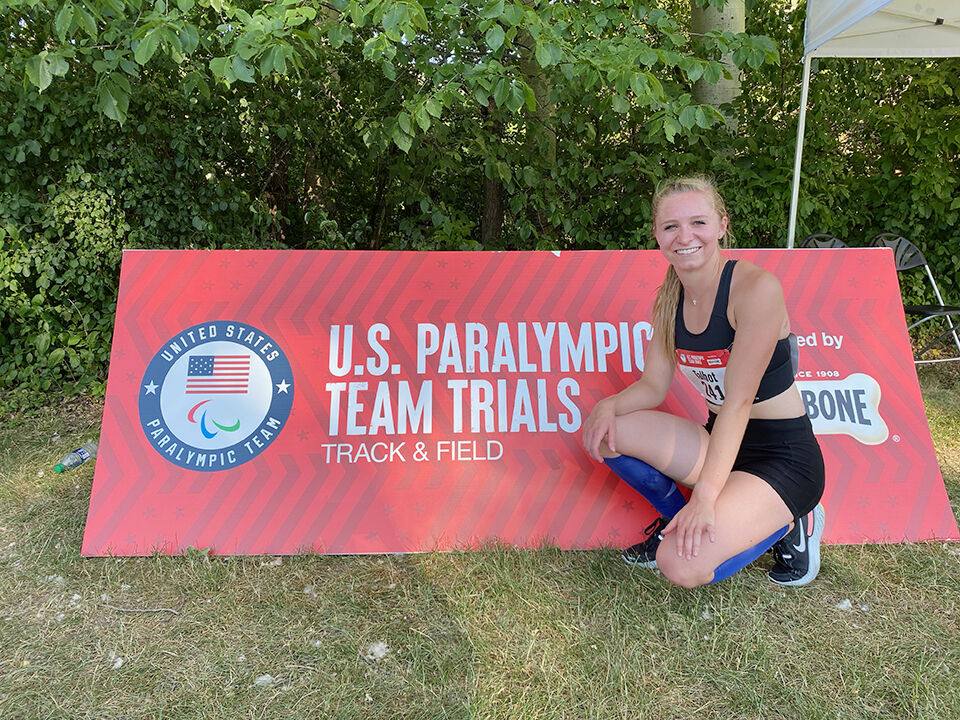 Paralympic athlete Taylor Talbot as she poses next to the Paralympic Trials sign after finishing her 100 meter, and running her fastest time of the season. 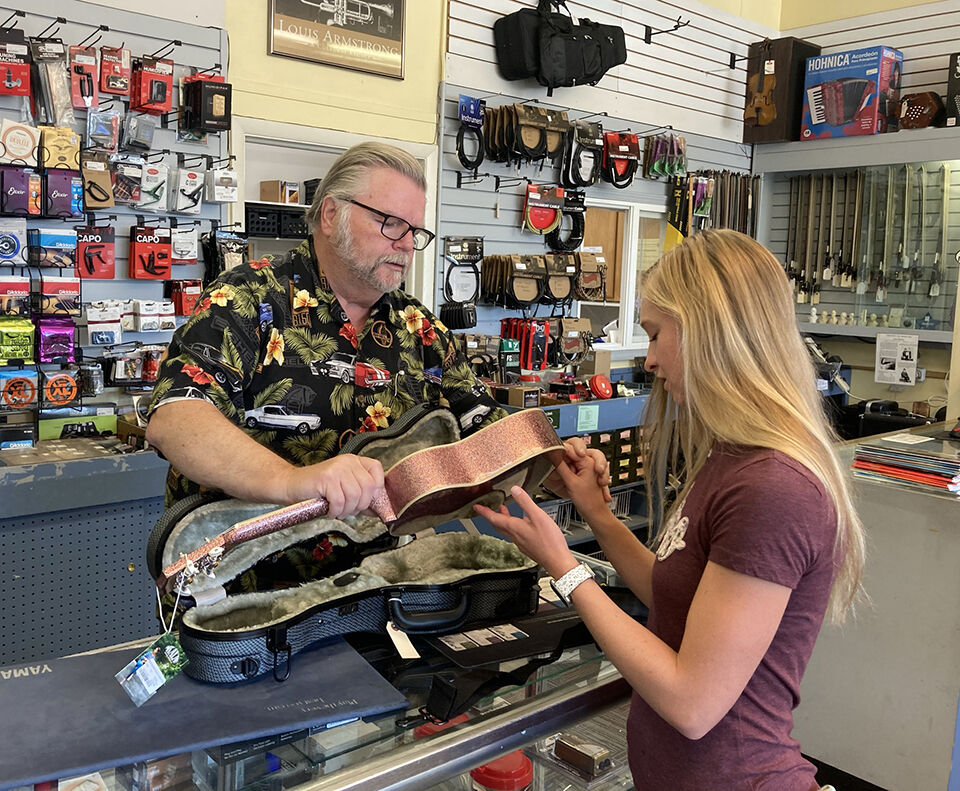 Taylor Talbot visiting Dorsey Music to buy herself a concert ukulele to take on her journey with her to Tokyo.

Paralympic athlete Taylor Talbot as she poses next to the Paralympic Trials sign after finishing her 100 meter, and running her fastest time of the season.

Taylor Talbot visiting Dorsey Music to buy herself a concert ukulele to take on her journey with her to Tokyo.

ONTARIO — During the month of June, Nyssa alumna, 2019 graduate, Taylor Talbot competed in the 2021 Paralympic Trials for track and field. The trials began on June 17-19, taking place at Breck School in Golden Valley, Minnesota. Talbot competed in the women’s T13 category, running in the 100 and 400 meter races. Talbot has a retinal degenerative disease called retinitis pigmentosa. She currently has 5% sight in her left eye, and less than five percent sight in her right eye. She had mentioned that she can only see a little flicker of light in her right eye. She managed to qualify for both of her races, and will be representing the United States in the 2021 Tokyo Paralympics. Talbot managed to leave the Paralympic Trials with two bronze medals for her events.

Originally, she was told she had qualified before receiving a call that told her she would not be competing in the Paralympics. That was followed by a second call that informed Talbot that she was being presented a direct invitation to the games.

Talbot currently resides in Ontario as she studies at Brigham Young University-Idaho, while majoring in interdisciplinary studies, a concentration on exercise science, a minor in music, and a cluster in child development. She grew up running track in the local area. She participated in the local Hershey’s track meets growing up. She had stated that track and field has always been a big part of her life.

She expressed her love for music, as well. She mentioned that music has helped her get through some tough times in her life, including the situation with the trials. She mentioned that she spends a lot of time at Dorsey Music, because the staff and store owner have helped her deal with the pressure and stress of being an athlete.

She stated that all of the instruments that she’s purchased from them has brought her “so much joy, especially during the hard times.”

Talbot had stated that she didn’t hear about the Paralympics till her Freshman year in high school. It later became a dream that she would strive to achieve, and she began to start her training her Sophomore year. Following graduation, Talbot competed at Junior Worlds in Switzerland where, she had mentioned, one of her favorite sports memories was made when she stood on the podium. She had mentioned that her favorite experience from her athletic career is getting the chance to meet so many new friends.

Although her 400 meter was not a personal record, she did manage to beat her personal best every track meet of the season, prior to the trials. Allowing her performance at the trials to solidify her spot on Team USA.

“It was such an amazing experience. It was my first [Paralympic] Trials ever, and I was feeling so ready for it.”

Although she appreciated the experience, Talbot had stated that there were some things that she felt like could’ve changed.

“The venue was horrible.”

Talbot stated that she disliked the location of the venue, being located at a college preparatory school in Golden Valley, Minnesota. Talbot followed that by mentioning that spectators were not allowed at the competition, in addition to the trials not being televised. She stated that the Olympians were at Hayward Field at the University of Oregon, with spectators, and the trials were televised.

“Us, as Paralympians, we didn’t get that ... I believe that we should be at Hayward Field with the Olympians.”

Talbot believes that Paralympians are elite athletes and are just as elite of an athlete as the Olympians. So she believes that they deserve to be on the same stage as one another.

Initially, Talbot was informed that she had qualified for the Tokyo Paralympics. She continued through the process by attending the team zoom call regarding the information about the Paralympics, the athletes’ involvement, and to inform them that they’ll be shipping they’re Tokyo kits with their uniforms.

Following the process, Talbot received a call from Sherrice Fox, Director of the Para Sport Operations for U.S. Paralympic Track and Field, and received the news that they had miscalculated the results.

Due to the miscalculation, they informed Talbot that she would not be competing in the 2021 Tokyo Paralympics, and told her that she would be listed as the first alternate. She had expressed that she was emotionally distraught after receiving the phone call, but that she wouldn’t stop her from training for the Paris 2024 Olympics.

Later in the week, Talbot had mentioned that she was relaxing on her bed, eating trail mix, and thinking about the entire situation when she started to receive another call. The call came from Sherrice Fox, and she told Talbot that the International Paralympic Committee wanted to give her a direct invitation to the Tokyo Paralympics. Therefore there would be another slot for the team, so Fox stated that Talbot would fill that position, and be attending the Tokyo Paralympics. Talbot stated that she was ecstatic, and even asked Fox if the position was set in stone; which was confirmed by Fox.

All things considered, Talbot will attend the Paralympic games in August.

The U.S. team plans to meet in the beginning of August in order to partake in the pre-games camp, planning to leave for Tokyo in mid-August. The Paralympic games will take place from Aug. 24 to Sept. 5, with the track and field portion being held from Aug. 27 to Sept. 5. Talbot will compete in her 100 meter preliminary race on the morning of Aug. 31, and if she manages to qualify, she will run in the finals during the night of Aug. 31.

She will run her 400 meter preliminary race during the night of Sept. 2, and if she manages to qualify, she will compete in the finals on the morning of September 4.

Following the games, Talbot intends to take a one-month vacation to recover before she begins her training for the 2022 World Championships.