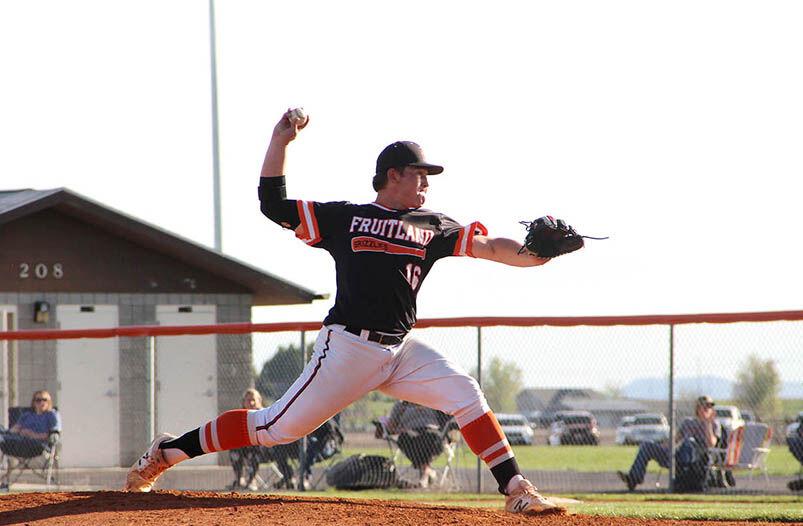 Fruitland Grizzlies senior pitcher Kade Bidwell bringing the heat with the two-seam after a great extension of the mound during a game in Weiser on Friday. 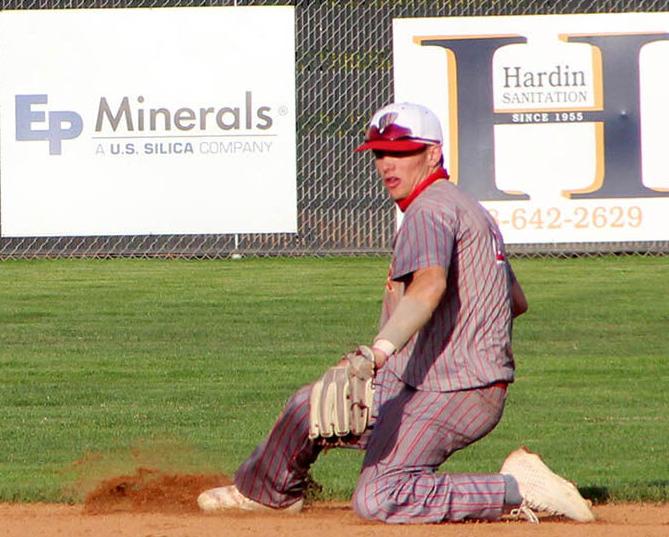 Weiser’s senior shortstop Kooper Von Brethorst making an outstanding move for the backhand ground ball; followed by a great stretch at first for the final out of the fifth inning.

Fruitland Grizzlies senior pitcher Kade Bidwell bringing the heat with the two-seam after a great extension of the mound during a game in Weiser on Friday.

Weiser’s senior shortstop Kooper Von Brethorst making an outstanding move for the backhand ground ball; followed by a great stretch at first for the final out of the fifth inning.

On Friday, Weiser traveled over to Fruitland for an important conference baseball game. The first time these two teams met, Fruitland (11) defeated Weiser (5), in Weiser. Therefore, if Fruitland were to win this game, they would secure the No. 1 seed for the district. However, if Weiser were to win, they would tie the seed conference by splitting wins (1-1). The Grizzlies inched past the Wolverines for a final score of 6-5.

Fruitland started the game in the field, where they were able to hold Weiser to none in the first. The Grizzlies were led on the bump by senior Kade Bidwell (16), who threw six strikeouts on 72 pitches on the night. He was then relieved by sophomore, Zane Bidwell (7), who racked up five strikeouts in two innings for the Grizzlies. Fruitland took over the bats, and progressed to scoring one run before the third out. End of the first inning: Fruitland 1, Weiser, 0.

In the second, Fruitland continued to play solid in the field, holding Weiser scoreless for another inning. This allowed the Grizzlies to go into the dugout with momentum on their side. In the bottom of the inning, Fruitland managed to get a couple batters on base due to some walks. In that moment the grizzlies’ senior, Dawson McGraw (1) stepped up to the plate, and managed to get the Grizzlies fired up after hitting a dinger to the field, getting two RBI’s; the only two runs scored in the inning. End of the second: Fruitland 3, Weiser 0.

During the third, the Wolverines continued to struggle with getting the bats on the ball. Although they weren’t having the ideal innings they wanted to start the game, players kept their heads up and mentalities locked-in through the entirety of the game. After turning the bats back over to Fruitland, the Grizzlies were able to advance two more runners home; through the efforts of Keith Adams (2), K. Bidwell (16), and Landen Mendive (8) for getting three RBI’s, combined, through the first three innings. End of the third: Fruitland 5,Weiser 0.

The fourth inning took a curve: The wolverines had a ‘no-quit’ attitude, and started to get a little more wood in their fire. They managed to step into the box and advance a runner through home to get on the board. After that, they turned it back over to Fruitland. The Grizzlies were still feeling comfortable, going into the dugout with some energy. At the bats, the Grizzlies still managed to get some hits, but it didn’t faze the wolverines. They were able to shut down the grizzlies for the first inning of the night, and enter the top of the fifth with confidence. End of fourth: Fruitland 5, Weiser 1’

In the top of the fifth, the Wolverine coaches put emphasis that the team needs to get the bats moving. Weiser ended up tallying up two more runs to bring the gap a little closer. Junior Willy Shirts (9) and senior Kooper von Brethorst (4) led the wolverines in the box. Shirts went two for three with two RBI’s. Brethorst was the other top hitter, with two for four hits and two RBI’s. After turning the bats over to Fruitland and the bottom of the fifth; Weiser was ready to make it a game. They maintained the great defense displayed in the previous inning, which was ended by an outstanding back-hand dig on a grounder by senior Brethorst (4); who continued the great play by making the throw to first base, caught by senior Beau Shields, for the final out of the inning. End of the fifth, Fruitland 5, Weiser 3.

During the start of the sixth inning, the intensity of the game kept rising as these top teams of the district clashed for the No. one seed. Fruitland knew that they had to go get things done in order to secure the win; while Weiser started to gain confidence and momentum, nearing the end game. The Grizzlies managed to play good defense, but were not able to hold the Wolverines from scoring. Weiser was able to advance two more runs in; bringing it to a tied game before Fruitland got its final out. Weiser went into the field needing a great defensive inning, but it ended up in a rough situation. Fruitland had a runner on second and only one out, and the situation was going well for the team. Until pitcher Willy Shirts (9) struck out back to back batters to end the inning and send it to the 7th and final inning. Shirts had pitched 104 pitches and got 6 strikeouts.

The final inning was one for the books, Weiser came up to bat and wasn’t able to make much happen. They were only able to get one player on base before the Grizzlies got their third out. Weiser then took the field, aiming to shut the Grizzlies down. During the seventh inning, Weiser made the decision to swap pitchers. Following that, the Grizzlies started to get things moving. They got one on base and another player followed shortly after. Then Mendive came up to the plate and hit a walk-off game winner to the gap between center and right field.

It’s worth noting that Mendive hit the game-winning hit on his 18th birthday. When asked what his thoughts were when he approached the plate, he had the following to say.

“I just got to do my job and get it to the next guy; don’t try to do too much, and whatever happens will happen,” he said. After hitting the walk off, and watching his teammates rushing in the winning run, he said it “felt good to secure the win and the number one seed for districts.” A little later, Mendive was asked if it felt good to hit a walk off on a birthday.

He replied with an enthusiastic, “Oh yeah, no doubt about it!”


Mikhail Lebow is a sports and education writer at The Argus Observer. He can be reached at (541) 823-4806 or by emailing mikhail@argusobserver.com. To comment on this story, go to www.argusobserver.com.