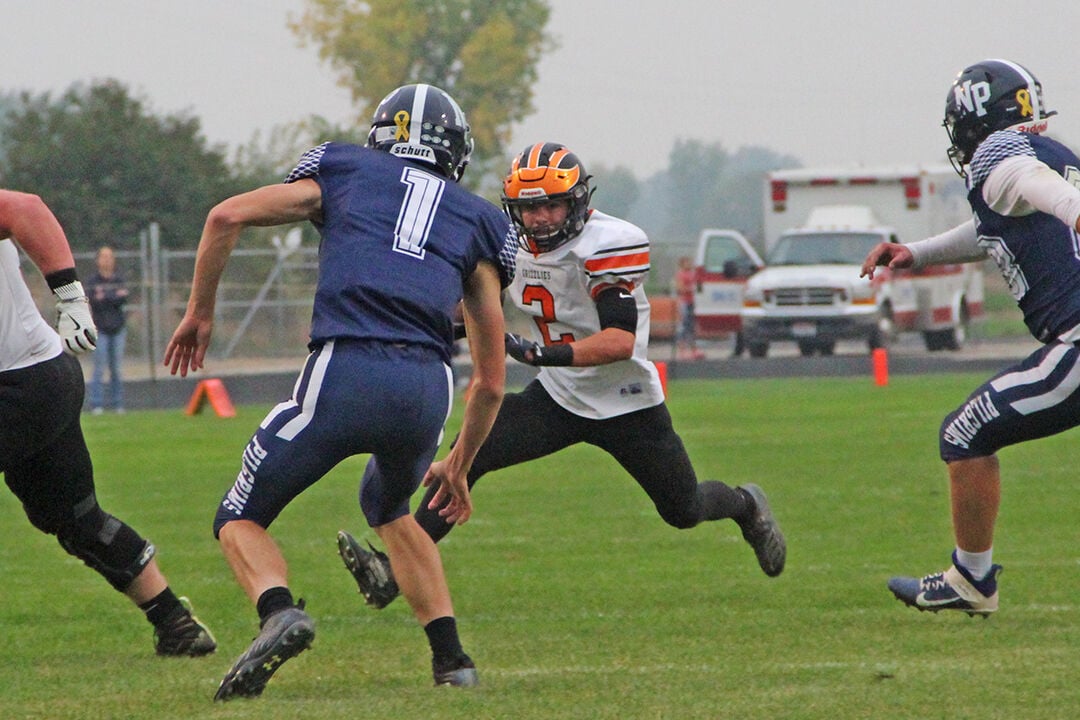 Fruitland's Jacob Walker carries the ball on a run play as New Plymouth's Casey Arritola prepares for a tackle. 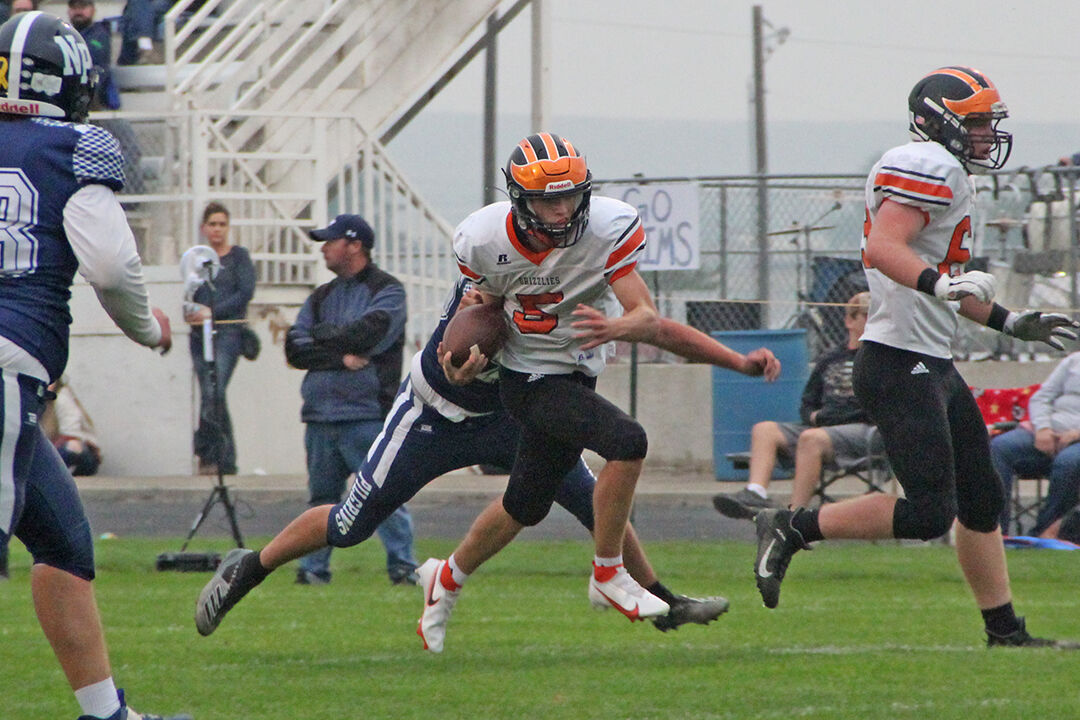 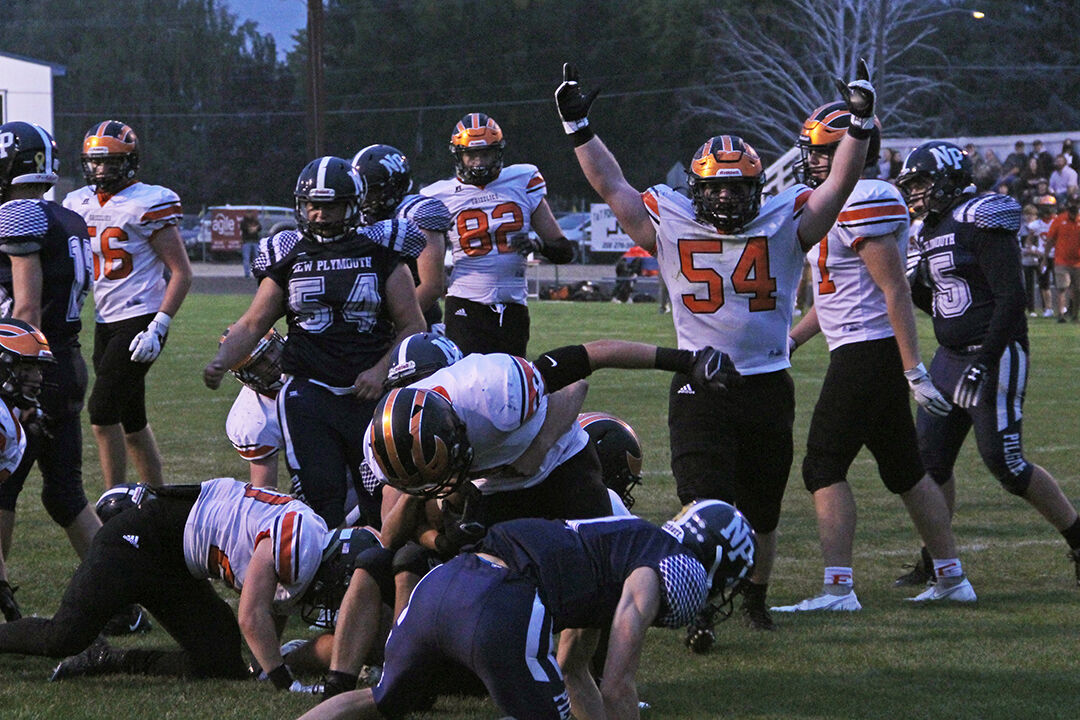 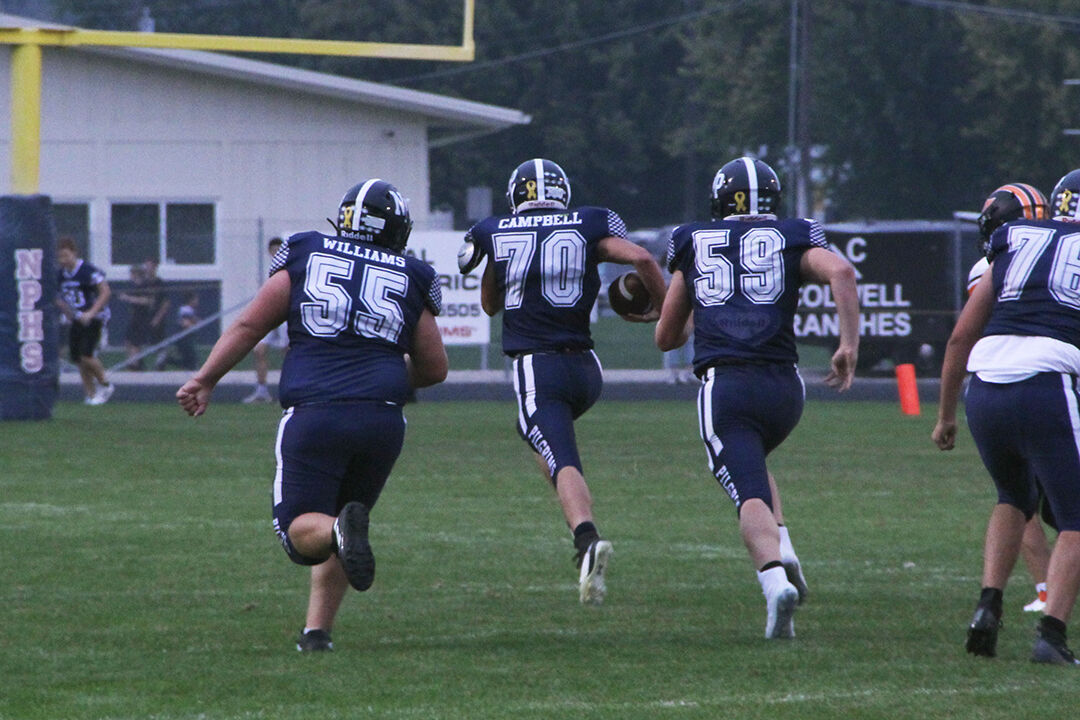 New Plymouth's Joel Campbell (70) carries the ball after picking up a Fruitland fumble.

Fruitland's Jacob Walker carries the ball on a run play as New Plymouth's Casey Arritola prepares for a tackle.

New Plymouth's Joel Campbell (70) carries the ball after picking up a Fruitland fumble.

For the first time in 15 years, fans of Payette County football got to watch a classic rivalry, as Fruitland took home a big 35-6 win at New Plymouth.

Despite being just seven miles apart, the two Payette County teams haven’t locked horns since 2005. For reference, any high school seniors were likely born in 2002 or 2003.

After the game Fruitland Athletic Director and defensive coordinator Russ Wright said he enjoyed getting to play against the Grizzlies’ classic rival New Plymouth and said it’s a game he’d like to see more of in the future.

New Plymouth coach Dallan Rupp said the reason why New Plymouth hasn’t scheduled Fruitland for some time has a lot to do with Fruitland’s success over the years. Between 2004 and 2017, the Fruitland football team had played in 11 of 12 3A state championship games and made a habit out of playing teams in bigger classifications in the preseason.

“They’ve done a lot in that time,” Rupp said.

But since the Pilgrims don’t have any Payette County opponents in the 2A West Idaho Conference, Rupp said he enjoyed getting to have this competition.

“It is really nice to have that rivalry game, too,” Rupp said. “I hope we can keep competing. We can play them, but can we compete with them at their level?”

Rupp said he thinks the Pilgrims did just that on Friday.

“If there’s a positive of the game, it’s that we did compete,” he said.

While the final score would suggest a blowout, the two teams played a close first half, with the Grizzlies taking just a 7-6 lead going into the locker room.

In the first half, the Fruitland offense was able to find success in moving the ball but struggled to finish drives. This was exacerbated by untimely penalties. In the Grizzlies’ first drive of the game, they brought the ball at the New Plymouth five yard line. On the ensuring plays, the Grizzlies fumbled the ball and had two holding penalties keep them from scoring.

But in the second half, the Grizzlies’ offense kicked into a higher gear, starting with a 44-yard touchdown run by senior Jacob Walker.

Walker said the biggest change in the second half for the Grizzlies was playing a smarter brand of football.

“We cleaned things up as far as the team goes,” Walker said. “We just cleaned our act up. And we had energy and were just having fun.”

In total, the Grizzlies finished with 331 yards of rushing offense.

Luke Barinaga, Fruitland’s sophomore quarterback, finished the game with four carries for 30 yards and a touchdown. He also completed one of two passes for 18 yards. Barinaga didn’t throw a single pass in the second half of Friday’s game.

With many returning skill players and linemen, Barinaga is one of the newest pieces of Fruitland’s wing-T offense. Walker said he’s seeing a lot of improvement in the sophomore already this season.

Fruitland’s defense put up a strong showing on Friday as well. The Grizzlies held New Plymouth to 152 total yards (105 rushing and 47 passing).

New Plymouth’s lone touchdown came in the second quarter on a 15-yard pass from Casey Arritola to Connor Hawker. That play was set up by a Fruitland fumble, which was recovered by Joel Campbell at the 15 yard line.

While the defense gave up a lot of yards on Friday, Rupp said he was happy with the way the defense was able to keep Fruitland from running up the score and holding strong in the red zone.

“We’ve had a ‘bend but don’t break’ defense this year. Sometimes we’re just like that,” Rupp said. “They were able to wear us down with their numbers.”

With the Pilgrims looking to keep the game closer in the second half, Rupp said there were too many mental errors.

“We gave them too many things,” Rupp said. “It doesn’t matter who you’re playing if you’re doing that.”

While Friday’s game was a non-league game, the Pilgrims were also able to use the game as a good indicator of where they are in the season. Rupp said the Grizzlies play a similar style of offense to Melba, who is in the WIC with New Plymouth, and Friday’s game was good for the defense in that capacity.

“It’s good that we can play with good teams,” he said.

Fruitland football coach Ryan Tracy was not in attendance for Friday’s game. Fruitland Principal Marci Haro and Wright were not able to provide comment on why Tracy was not at the game.

A call to Tracy was not returned by press time.