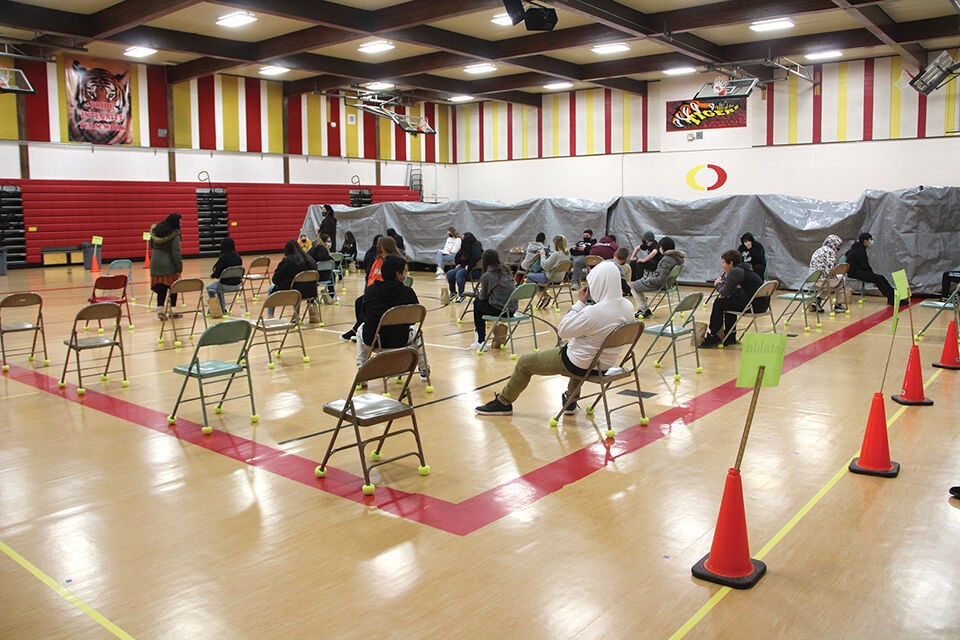 The state of Oregon says 3 feet of space in schools can now be allowed under certain conditions. However, schools must maintain 6 feet — such as when students from different classrooms are passing in hallways between periods, or when students are eating, as pictured here at the Ontario Middle School on Feb. 18. 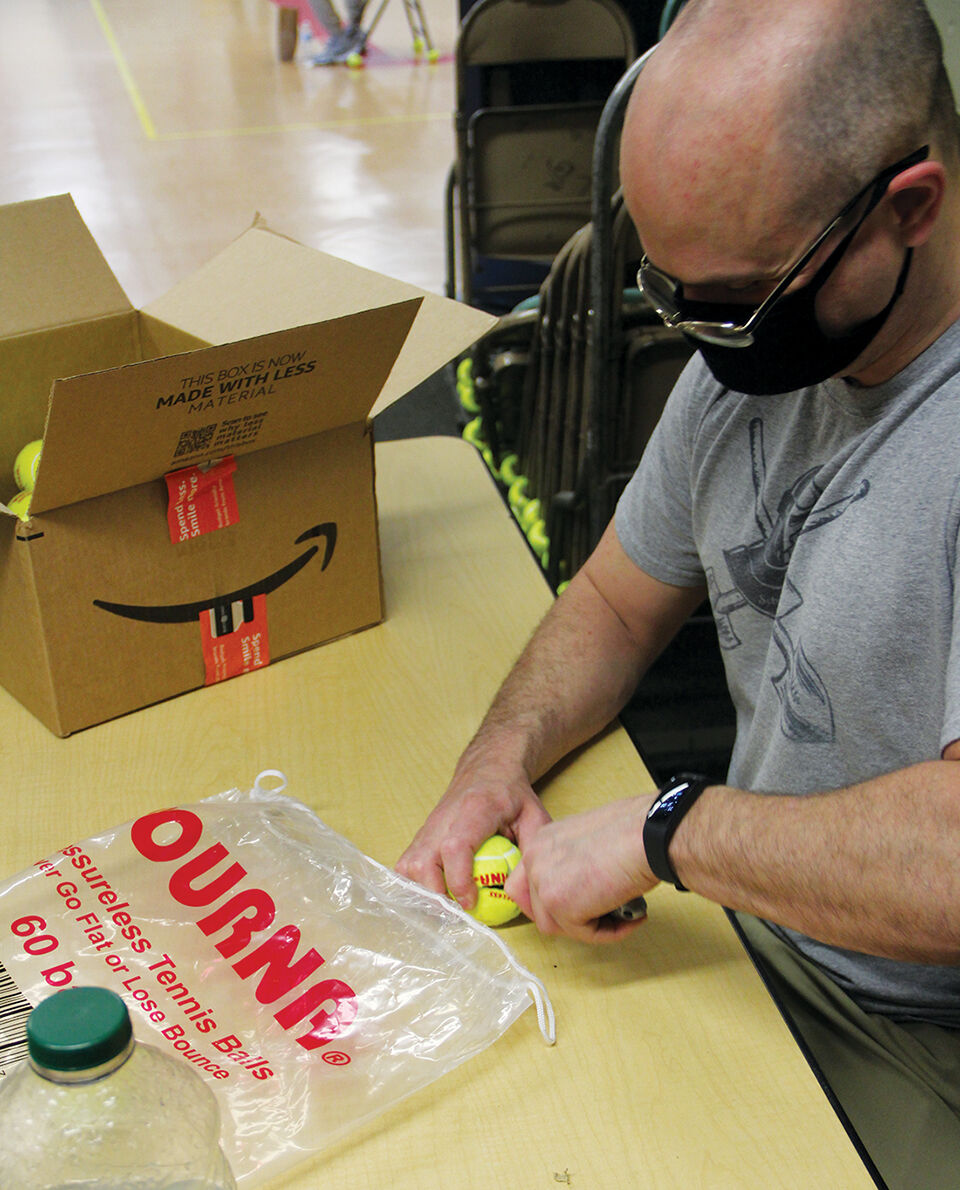 Ontario Middle School teacher David Scheidegger cuts X's into one of 1,300 tennis balls, so they can be put onto the legs of folding chairs before being put onto gym floors for meals. 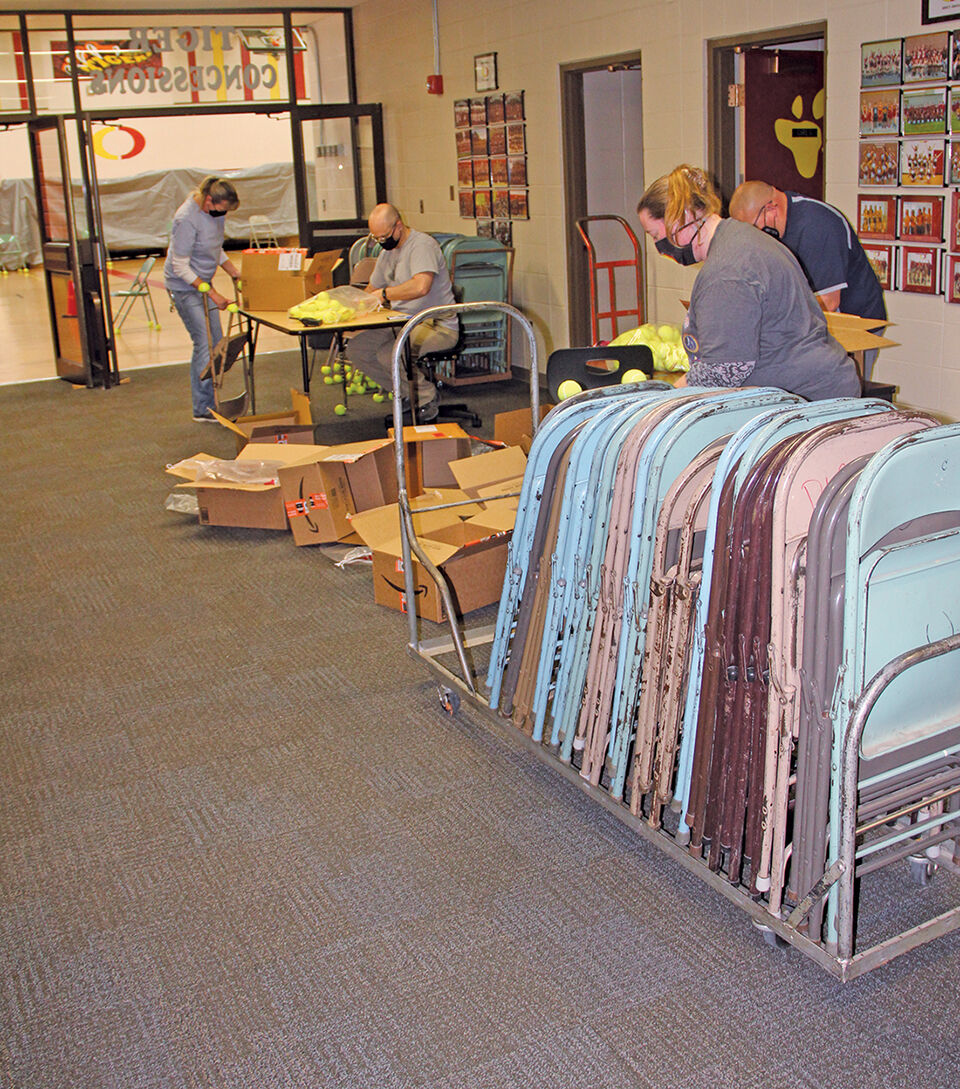 About an hour before lunch started for students at Ontario Middle School on Wednesday, teachers and admin helped the janitorial staff in affixing the tennis balls to folding chairs and setting them in their respective spaces in the gyms and cafeteria.

The state of Oregon says 3 feet of space in schools can now be allowed under certain conditions. However, schools must maintain 6 feet — such as when students from different classrooms are passing in hallways between periods, or when students are eating, as pictured here at the Ontario Middle School on Feb. 18.

Ontario Middle School teacher David Scheidegger cuts X's into one of 1,300 tennis balls, so they can be put onto the legs of folding chairs before being put onto gym floors for meals.

About an hour before lunch started for students at Ontario Middle School on Wednesday, teachers and admin helped the janitorial staff in affixing the tennis balls to folding chairs and setting them in their respective spaces in the gyms and cafeteria.

The primary focus of reopening Ontario Middle School for full-time in-person learning to the 235 students that returned to school on Feb. 10 was, and still is, keeping students and staff safe from the spread of COVID-19. With that in mind, school lunch for students for the first two days took place on the floor, where student cohorts were socially distanced with sack lunches that included assorted finger foods.

The school was unable to use its normal lunch tables. Due to social distancing rules, they could only seat three students per table, according to Ontario Middle School Principal Lisa Longoria. That meant needing to find individual seats for every student so there would be equal treatment for all of them, she said. In order to do this, the school had to borrow those chairs from every nook and corner that could be found within the district’s many buildings.

However, getting enough chairs for students didn’t mean they could just be set up and used right away, as they would scratch the gym floors. It’s noteworthy that floors in the school’s Tiger and Cub gymnasiums have recently been replaced.

This resulted in officials ordering 1,300 tennis balls — and they may need more as students still participating in distance learning return to in-person classes. Those supplies did not arrive until late Tuesday night. Wednesday morning was spent slicing x’s into the tennis balls, then affixing them one at a time to each of the four legs on the chairs. From there, chairs were set on their respective blue dots measured out for social distancing in one of three places: two areas of the Tiger Gym, the Cub Gym and the cafeteria.

As a result of students eating on the floor for the first several days back at school, Longoria said two parents contacted her saying that while their students hadn’t complained, they themselves had a personal problem with it. At least one parent, who asked that her name be withheld, called the newspaper and said she had pulled her student out of school over it.

As with Longoria’s complainants, she told the Argus that her child wasn’t bothered by eating on the floor, but when she found out, it caused her to pause.

She said it felt “disrespectful to have students on the floors” while teachers could sit at their respective desks to eat. However, she added, that if things changed and students were not eating on the floor she would send her child back.

Also cited as a concern was whether eating on the floor might increase a student’s risk for contracting COVID-19.

Longoria said while students were eating on the floor, crews were disinfecting the floors before and after all meals.

Additionally, Malheur County Health Department Sarah Poe said that risk of contracting the virus would not likely come from eating while sitting on the floor.

“Eating on the floor versus a table has zero impact on the spread of COVID-19,” she said, as the virus spreads through respiratory droplets from the nose or mouth.

“It’s about close, prolonged exposure,” Poe said, adding that it wouldn’t be a concern to the extent of the “extremely controlled environment” the schools are creating with cleaning and social distancing mandates.

“I wouldn’t trade jobs with a teacher right now. They are doing an incredible job that’s so hard,” she said. “For us to say schools can reopen, that comes with a ton of work for them to follow the blueprints they [state officials] wrote.”

Why not purchase tables or eat in class?

When asked by parents why not purchase more tables, Longoria explained that principals typically stagger purchases of lunch tables, every five years or so, as the cost is so high. She said the last time the school purchased one, the cost was about $2,500 to $4,000.

Not having lunches in classrooms came down to sanitation needs and the number of people available to do it.

Currently there are many adults, including three custodians, who are preparing and cleaning areas before and after breakfast and lunch, as well as all other areas of the school after everyone leaves.

While some may think three custodians is a lot, Longoria explained that it is not because those people used to work separate shifts and now must work during the same shifts multiple times a day. Additionally, she reminded, they all have families at home they are taking care of and not everyone is able to work overtime.

Eating in classrooms would be even more problematic, Longoria explained, because it would mean students removing their masks in order to eat in a confined space.

As such, this would mean that after students ate, the entire room would need to be sanitized while students waited somewhere else, which in turn would also have to be sanitized.

Additionally, staggering lunches would have been unrealistic, Longoria said, because of the sanitizing required before and after and the amount of people available to do the task at the same time due to intensive scheduling which also includes shifting in-person classrooms and being available for students in distance learning.

Ready or not, here we come

While the students hadn’t complained, only the parents, Longoria said having kids on the floor bothered school officials too, but they weren’t given enough time.

“This has been a huge undertaking,” Longoria said of getting the Ontario Middle School ready for in-person return.

From working out the bigger details (splitting the students into four cohorts), to the smaller details, such as how kids use the restroom.

“There is a ton of guidance we have to follow and we’re well-rehearsed in it,” the principal said. “When the guidance changes the next day, we’ll do the best we can.”

“From the beginning, her mission has been to keep students and staff safe,” she said.

When Longoria was initially asked as a principal what date they might be ready to start, she said Feb. 17.

However, the board decided the middle school would start at the same time as the elementary schools.

“There was no discussion, we were told to come back on Feb. 10 along with five elementary schools,” she said. “That put a strain on all of our departments, including custodians, transportation, nutrition and other resources.”

Longoria was surprised that the board did not even follow Oregon Department of Education’s recommendation to stagger the return of in-person classes among schools. As a result, officials had to “figure it out little by little,” making adjustments after the school was already open.

Longoria believes staggering the opening of schools would have been a better option for Ontario students as a whole. Additionally, she says this would be more achievable if there were grade-level schools, such as the middle school where only two grades are grouped together. Instead, there are five schools with each housing kindergarten through sixth grade classes.

“Years ago we asked the board for grade-level schools and, once again, we weren’t listened to,” said Longoria, who has been the principal at OMS since 2013. She began as the vice principal in 2012.

In notes she was preparing for the Ontario School District Board of Directors for its upcoming meeting on Monday, Longoria says the board’s decision not to give the middle school more time or stagger the opening of schools has caused a “burden on our maintenance crew that has been overwhelming.” She goes on to tell the board that adding the middle school to the first round of reentry “only serves to further burden our staff and their resources.”

‘Doing the best we can in the timeline’

During the interview at the school this week, Longoria was hopeful people could grasp the work that has been done to reopen schools while still teaching.

“The thing is people don’t understand we didn’t [have time] to stop and plan. We were still doing what we were doing: teaching distance learning and limited in-person instruction” while simultaneously preparing for return to full-time in-person schooling.

Longoria mentioned that in a recent board meeting someone commented that school officials have had since last March to figure this out.

“If only we did,” she said. “People just don’t understand. We are in this business because we care.”

It is noteworthy that since schools were first shuttered in March of 2020 due to the pandemic, guidelines have been changed many times over by state agencies, including Oregon Department of Education and Oregon Health Authority along with Gov. Kate Brown.

“Allow us the patience and give us the grace,” Longoria said, adding that they want the kids back. “We are doing the best we can in the timeline we were told to get ready.”