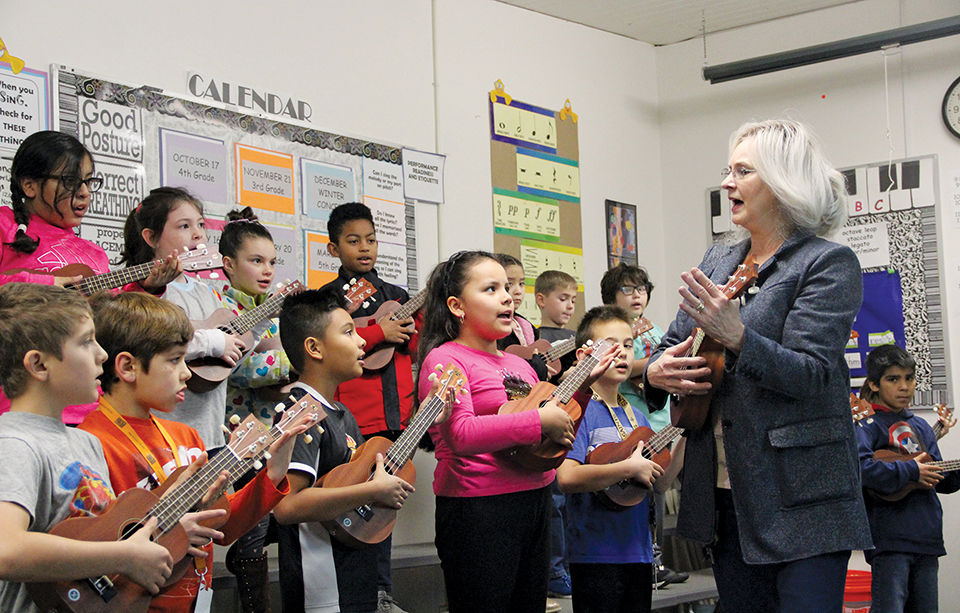 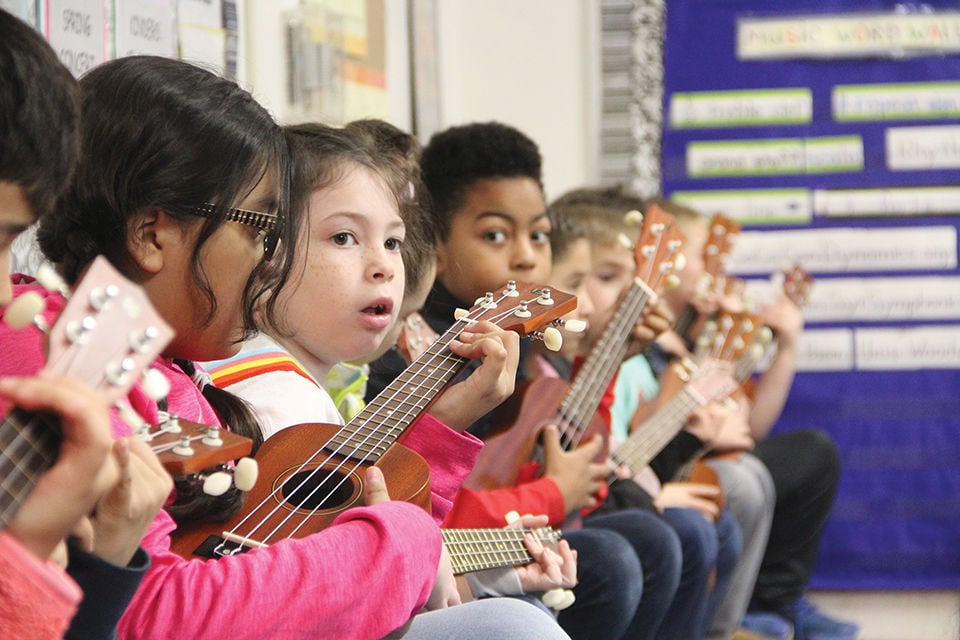 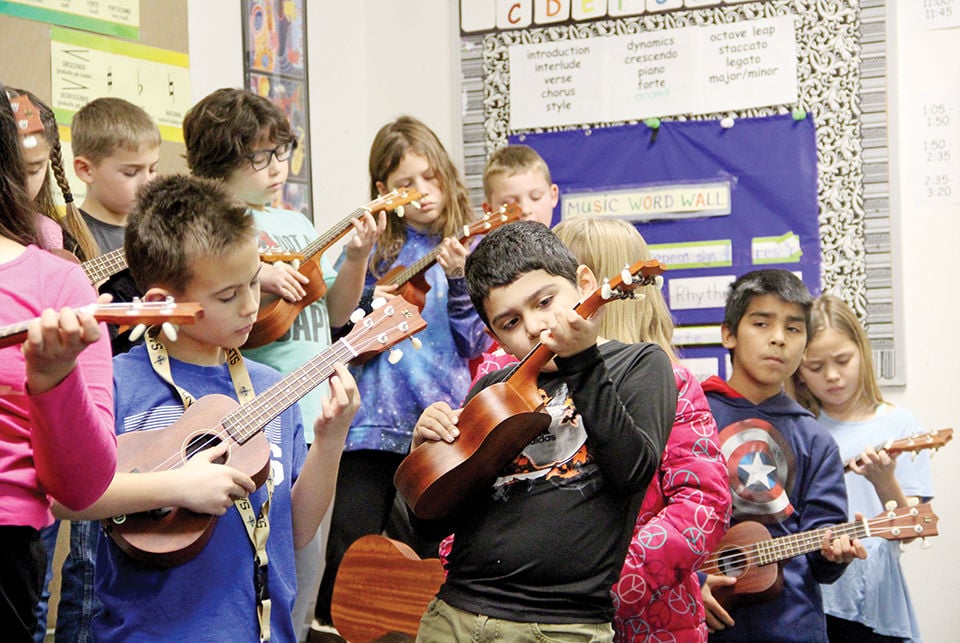 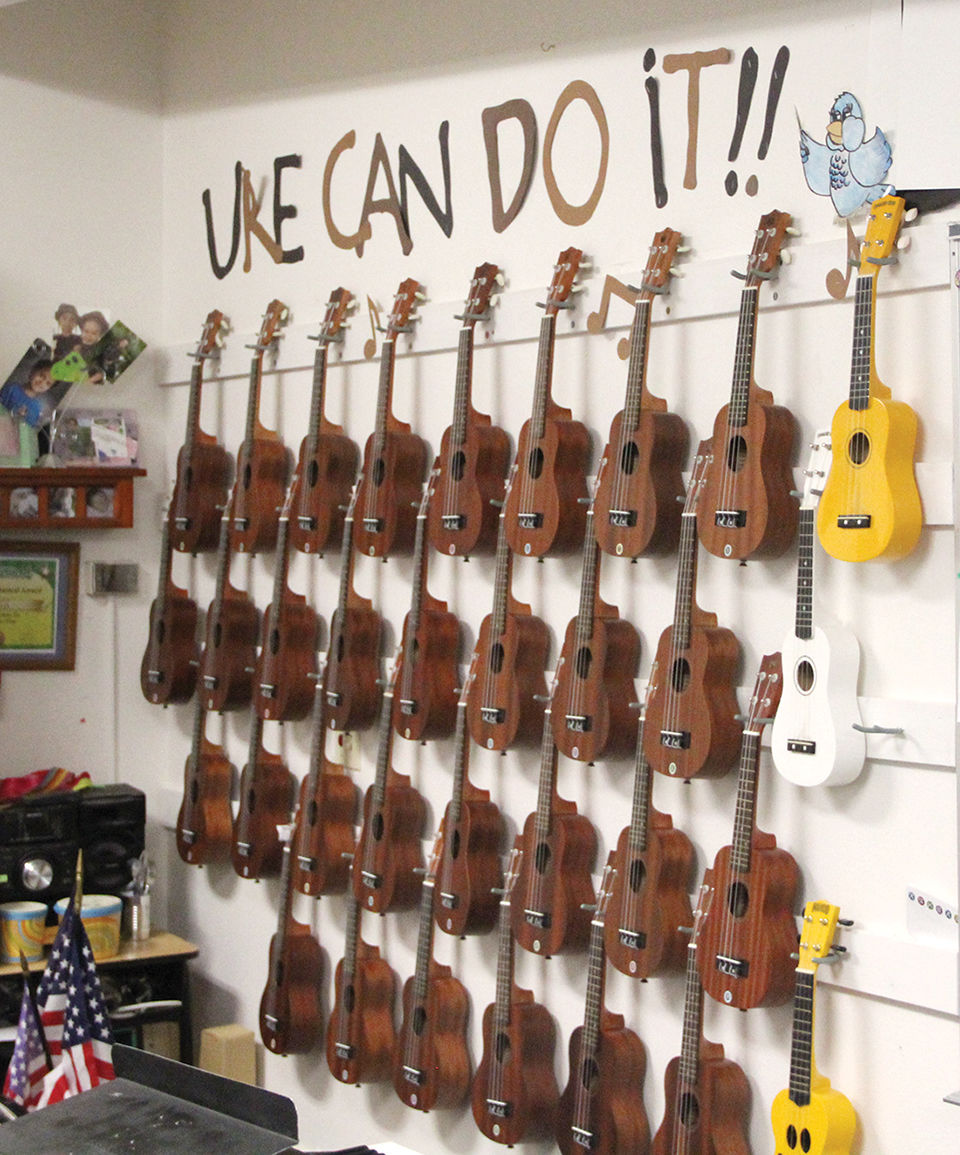 This wall of ukuleles carries and an inspiring message.

This wall of ukuleles carries and an inspiring message.

ONTARIO — People passing by Susie Lott’s music class on Friday morning could a mixture of music ranging from Nigerian children’s song “Funga Alafia” to traditional Japanese folk song “Sakura Sakura.” But instead of just singing, the students of Aiken Elementary School were playing along with the brand new ukuleles that Ontario School District has received for both Aiken and Cairo Elementary Schools.

According to Lott, the ukuleles at Aiken Elementary were purchased with a combination of funds starting with a Donors Choose campaign, which allows teachers to collect donations for class projects and items. Lott said the school covered the remainder of the costs for the ukuleles.

At Cairo, the ukuleles were purchased entirely by the Parent-Teacher Organization.

On top of helping the students learn about a new culture, Lott said the ukulele allows the students to learn more about instruments in general.

While Lott said the ukulele’s chords and strumming all require a little bit more one-on-one attention with the younger kids, she said it’s been a good thing to see the students immediately making music with the simple four-stringed instrument.

“From the first time they held the ukuleles, they felt like they were making music instantly,” Lott said. “It’s great to see them learn and just creating something worth listening to.”

While the small instrument fits perfectly in the hands of the elementary schoolers, Lott said there is added layers when it comes to the younger students using the ukulele, like how to hold it and how to hold the chords.

“I’m really surprised to see what we’ve been able to do with just open strings,” Lott said.

Lott also had to have wall mounts set up so that all the instruments could fit in the classrooms without taking up floor space.

By the end of the school year, Lott said she’s hoping that even the kindergarteners will be able to play some songs just like their older classmates.

Before getting the ukuleles, Lott’s music class looked a little different. At Aiken Elementary, the music classroom shares a wall with another class, so Lott said they have to be mindful of the noise.

So while Lott’s classes are fond of singing, she said she shies away from one elementary school staple: the recorder. With the ukulele, Lott said a student can play a wrong note and it will just sound like they’re strumming, but with a recorder the wrong note might send out a screech that will wake up the whole school.

“I can’t stand the idea of another class sitting through the noise of the recorder,” Lott said.

She said she has tried a wide range of other instruments, as well. These include a lot of percussion instruments, such as miniature xylophones, rain sticks, tambourines and Boomwhackers (a plastic tube that are tuned to a pitch when hit).

Ukuleles a chance for Ontario students to embrace a new culture