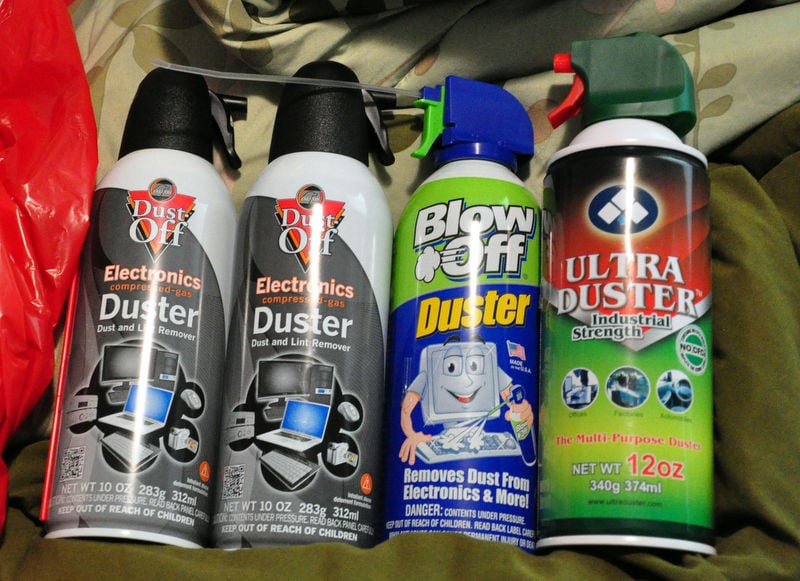 An assortment of dust cleaners that can easily be found in stores. 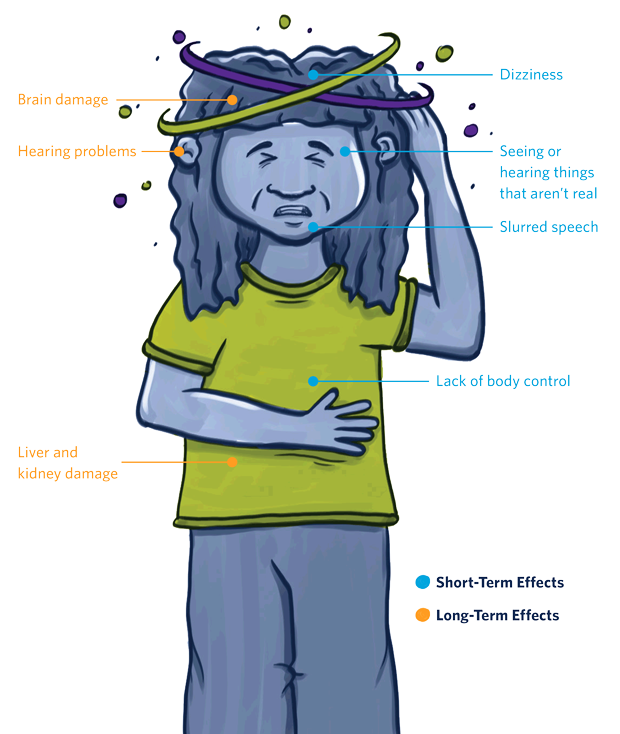 This graphic from an educational publication called Mind Matters: The Body’s Response to Inhalants, shows how they affect the brain and body.

WESTERN TREASURE VALLEY — Nation-wide, inhalants are the fourth-most abused substance after alcohol, tobacco and marijuana. And while people of all ages misuse the chemical products, according to a 2016 report compiled by the Substance Abuse and Mental Health Services Administration, on the Alliance for Consumer Education, youth ages 12 to 17 abuse inhalants the most, with those age 18 to 25 in the next highest category.

The national problem is also a local one, and in Payette County, Coroner Keith Schuller points to dust cleaner as a go-to for those looking for a cheap, brief high.

Commonly known by the brand name Dust-Off, this is the compressed air in a can which is used for blowing dust out of small spaces, typically in electronics. But inside the can is not just air — there is a propellant that helps it whoosh out of the can, which is a toxic and sometimes deadly chemical: 1, 1-diflouroethane.

In June, a Fruitland woman drowned in the Snake River and toxicology results from the autopsy which were recently revealed show that her organs were filled with the chemical, and it is believed she was using it before she fell into the river.

Schuller says there have been six deaths in recent years as well as several car crashes “due to inhaling or ‘huffing’ of canned air or Dust-Off.”

Schuller says the clear, colorless propellant can cause extensive bodily damage and even death.

He cited a local incident of what is known by medical experts as Sudden Sniffing Death. In that case, a Payette County resident went into a local store, purchasing a can of duster for less than $5 and they were found dead less than an hour later.

Other serious consequences include damage to vital organs, as well as permanent personality changes, memory impairment, hallucinations and learning disabilities.

Despite the appeal of the immediate rush of euphoria usually reported by those who use inhalants, the high that dissipates quickly often has lasting health consequences.

Schuller cites economics as a primary driver of people turning to huffing. He says many people who are addicted to other substances such as alcohol or methamphetamine eventually turn to duster because it is cheaper.

Across the nation, retailers handle selling dust cleaners differently with some locking it up and some requiring purchasers to be age 18. That’s no different locally.

At Red Apple Marketplace, it is kept under lock and key, and purchases have to be made at the customer service counter.

A spokeswoman at the Ontario store said that she believes they started putting it behind the counter three years ago to counter theft of the product. There is also no age restriction to purchase it there.

However, across town at Staples, the product is not locked up, but purchasers must present an ID to prove they are 18 or older.

Prevention methods at home can come in the form of limiting aerosol products by swapping them for pump sprays.

“Deaths from huffing in Payette County have occurred in all age categories from early teenagers to adults,” Schuller says. “It can be especially disturbing when cluster deaths occur in pre-teens and teenagers.”

For this reason, he urges parents to be extra aware of the dangers posed by common household products and to be vigilant in educating and informing youth.

“The most important way to combat this drug abuse is to educate parents about it and to inform children and young adults that the inhalants can kill them on the first try,” Schuller says.

In the United Kingdom, which tracks deaths associated with huffing aerosols, 39% of the deaths occurred during the victim’s first time.

Schuller urges parents who suspect inhalant abuse to take their child to get a drug assessment from qualified medical personnel. Schuller suggest local recovery services and group support programs which are available.

While information about inhalants isn’t really tracked by law enforcement in Malheur County, Undersheriff Travis Johnson remembers one major accident that was the result of inhalants: the crash into bleachers at the Global Village event in Lions Park in Ontario in 2012.

In that incident, the driver, who witnesses say was smiling or laughing while driving into the crowd, was suspected to be under the influence of inhalants, as several spray paint cans were found inside the vehicle. That crash resulted in 31 people being treated for injuries, and a 10-year prison sentence for the driver, Everado Jaime, who was 19 when the accident happened.

Calling it “super dangerous stuff,” Johnson said he has seen people in the Malheur County Jail over the years who have huffed.

“The amount of brain damage it causes is unbelievable,” he said. “It sets them back years and years.”

In fact, one time he had interviewed someone later finding out they had irreversible brain damage and that the adult was developmentally disabled because of huffing.

“It’s a hard one to track,” he said. “It’s a quick high for a short amount of time — other than the lasting brain damage.”

“His organ’s were starting to liquify — they were turning to mush.”

Unfortunately, warning signs of huffing are not always easily detected, however, following are signs which may indicate abuse.

• Disappearance of the product at a rapid rate;

• Going thru more of these products than seem necessary;

• The presence of dust cleaner in easy-to-reach locations;

• An overall change in social circle;

• Withdrawal from family and friends;

• Falling down and a staggering gait;

• Getting involved in potentially hazardous situations;

• Empty cans or containers of chemicals in trash cans;

• Large stashes of a chemical product in the child’s room;

• Strange smells on or around a child;

• Residue on hands, clothes, and face;

• Complaints of numbness of the tongue, vocal chords or throat; or

It cannot be emphasized enough that this stuff is NOT AIR, if you have to spray an extended period while cleaning your electronics it actually FROSTS OVER ON THE CAN...because it's a REFRIGERANT!!! Those of us who actually use it to clean up dirty circuit boards and assemblies in our audio and video repairs will gladly put up with anything that keeps it away from stupid thrill seekers at least temporarily, but it's the same mindset that follows any substance use and abuse. Get you 'kicks' playing "Kicks"! Music and gear are a lot more rewarding.