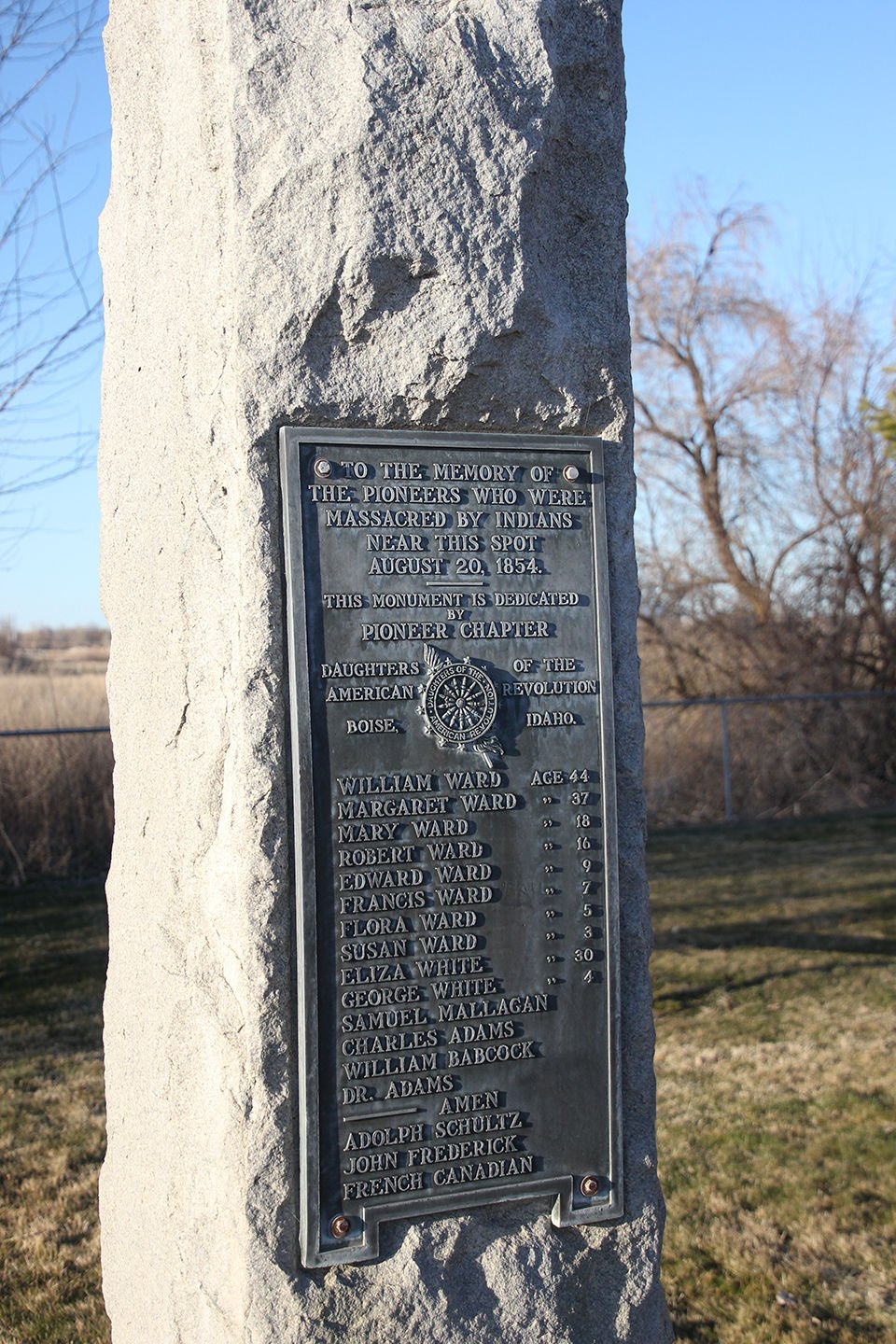 This photo shows the Ward Massacre monument, in Middleton 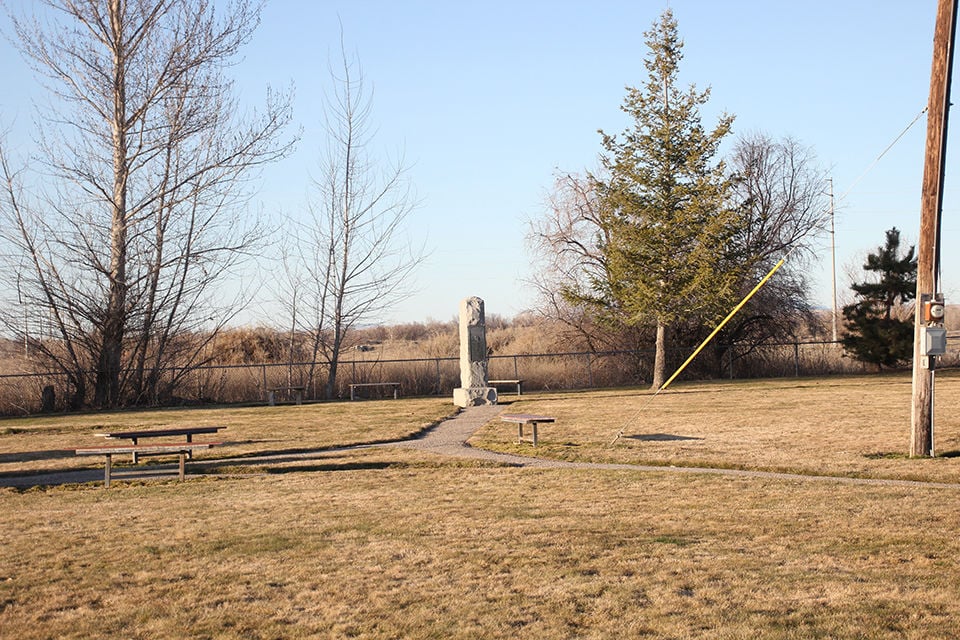 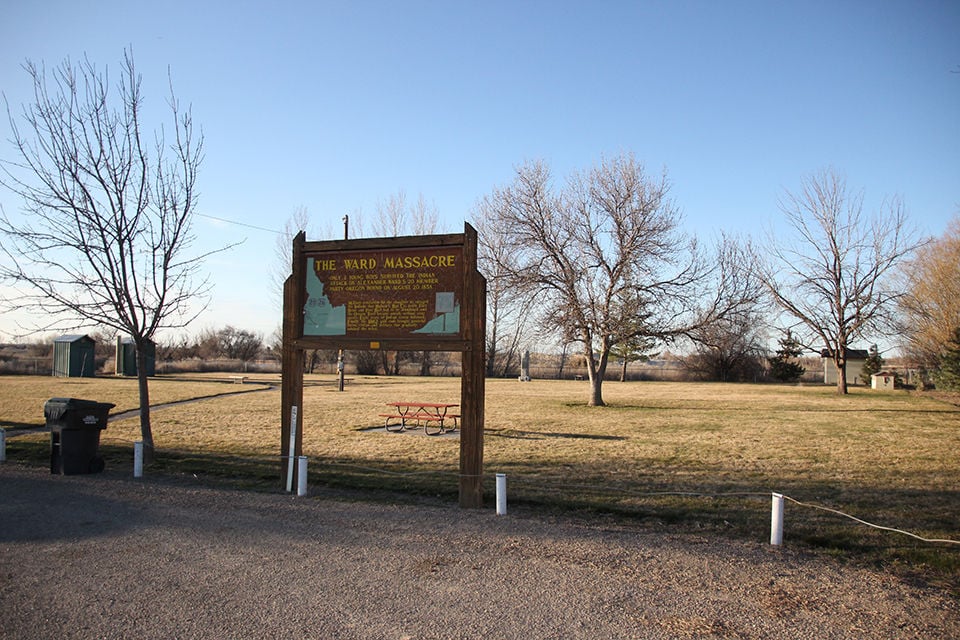 This photo shows the Ward Massacre monument, in Middleton

Four sites of tragedy along the Oregon Trail in southwest Idaho and eastern Oregon have been memorialized including one in Malheur County, along the Owyhee River and one between the county line and Huntington.

A fourth one has ties to a family in Ontario.

Three events, which occurred in 1860, were the “Utter Massacre,” southeast of Murphy in northern Owyhee County; “Starvation Camp,” along the Owyhee River north of Adrian; and the “Van Ornum Massacre,” in a meteor crater between Farewell Bend and Huntington.

In 1982 the late Louise Hill, of Adrian, a member of the Malheur Country Historical Society, began working to have a monument placed along the Owyhee River. Hill was inspired to initiate the project after being given a letter from a descendent of Emeline Trimble, a survivor of “Starvation Camp.”

Trimble later wrote a book on the horrific experience.

In the letter Hill was given, one of Trimble’s relatives inquired if a monument had ever been placed at the site. Although Hill’s first efforts were not successful, the proposal to establish monuments and/or reader boards at or near the sites was renewed under sponsorship of the Historical Society and the Idaho chapter of the Oregon Trail Association.

According to a history of the incidents published by Don Shannon, in September 1860, a wagon train led by Elijah P. Utter was attacked on the alternate route of the Oregon Trail, which stayed south of the Snake River, in contrast to the main route which crossed at Three Island near Glenns Ferry.

The wagon train comprised 44 people, including four families with a total of 21 children, plus five ex-dragoons and one Army deserter, who had joined up with the group. During the two-day attack, 11 emigrants were killed, including all but two members of the Utter family. An estimated 25 to 30 American Indians also were killed.

Around Sept. 18, 1860, 26 survivors of the Utter Massacre arrived at a crossing on the Owyhee River, some 75 miles from the site of the first attack.

The group had no food, was exhausted and included settlers who had been wounded during the initial attack. They decided to make camp along the Owyhee River and wait for help.

After two weeks, American Indians found them and traded salmon for clothes and firearms.

After getting the food, the Van Ornum family, a young man named Gleason, and the two surviving Utter boys traveled on down the Oregon Trail. They were followed by the Shoshones, and the three Van Ornum girls and their brother were taken captive.

Bodies of the other six members in the party were later found in the meteor crater south of Huntington.

Back at the Owyhee River camp, one adult and four children died of starvation and those who remained alive resolved to eat the bodies of the dead, hoping to save their own lives until help should come. The survivors were rescued Oct. 24, 1860, by an Army relief expedition led by Capt. Frederick T. Dent. The survivors included the Joseph Myers family of seven, Elizabeth Chase and daughter, Mary, and Emeline Trimble.

While there are some off-site historical displays on the incidents, members of the historical groups agreed they would like to see monuments put up at or near the sites, with reader boards available at or near them to explain the history. Their first order of business, they said, is to determine where the markers should be and the best locations for the displays and contact the appropriate agencies and/or individuals about putting them up.

In a presentation to the Malheur Country Historical Society, Jim Ward, who had ancestors related those involved in the Ward Massacre, said that incident occured in 1854 near Fort Boise. The party was led by William Alexander Ward, and included several members of his family.

The party, which was on its way to western Oregon, stopped along the way and never reached Fort Boise, he said. The horses pulling the wagons were being watered when some Indians came along and tried to buy some of the horses. When they were denied, the Indians went away and came back and stole a horse, he recounted, at which time the travelers gathered their things and attempted to move on.

However that could happen, the wagon train was attacked by about 200 Indians and the ensuing battle wen on for about two hours.

Killed first were the men who were attempting to fight off the Indians, he said, then the Indians went after the women and children, some of who were burned alive. Also killed were some men who refused to fight although they were armed, and hid in their wagons.

Two teens by the name of Ward survived the attack, although they were severely wounded. Newton Ward was found and rescued by members of another wagon train, despite the objections of some of the travelers.

William Ward was able to crawl to Fort Boise, arriving there three days after the attack, with an arrow still in his body. Nursed back to health he joined Newton at a relatives, who had settled in the Willamette Valley sometime earlier, and both continued to live in the Northwest for the rest of their lives. That James Ward already living in the Willamette Valley is an ancestor to Kent Ward and son, Jim, who gave the presentation.