Fruitland will be without football coach Ryan Tracy for one more week, as on Wednesday afternoon, the long-time Grizzly coach announced that he was penalized by the District III Board of Control for taking pictures of plays from the Weiser playbook and distributing them to a member of Emmett’s staff.

In a letter given to The Argus Observer on Wednesday afternoon, Tracy apologized for the incident.

According to Tracy, the Board of Control issued a two-game suspension, a $1,000 fine to the school and placed him on probation for one year. Tracy said the Fruitland School District Board of Trustees also met with him (they met in a special meeting on Monday) and issued him an additional suspension. Tracy would not disclose what that additional suspension was.

Tracy said it is “common practice” for coaches to share materials with each other, but that sharing the photos with another coach was crossing the line.

“I made a serious lapse of judgement and I am embarrassed by my decision,” he wrote.

Fruitland High School Principal Marci Haro said she has contacted Weiser and spoke with Principal David Davies and said they had a constructive discussion on the matter.

“He’s a colleague and we want to have a good relationship with them,” Haro said. “We’re all in education together. We’re all here for the kids.”

Haro said she stands by Tracy.

“I support my coach two-hundred percent,” Haro said. “I’m proud to be on his team. I support all of my coaches and staff.”

Fruitland Athletic Director Russ Wright, who is also the defensive coordinator on the football team, said he hopes that people will not base their opinion of Tracy on this situation.

“He’s been here nineteen years, that’s longer than I have. And he’s done a wonderful job,” Wright said. “We don’t want to be judged on our worst decision we’ve made. Because we’ve all made them.”

The Wolverines and the Grizzlies are scheduled to play at Fruitland on Friday night. 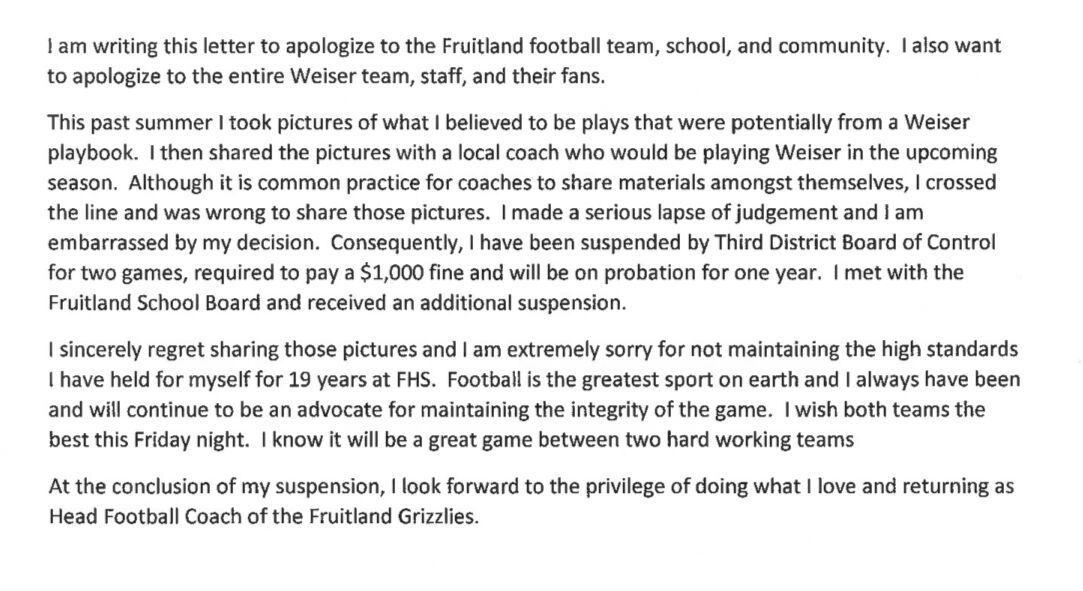 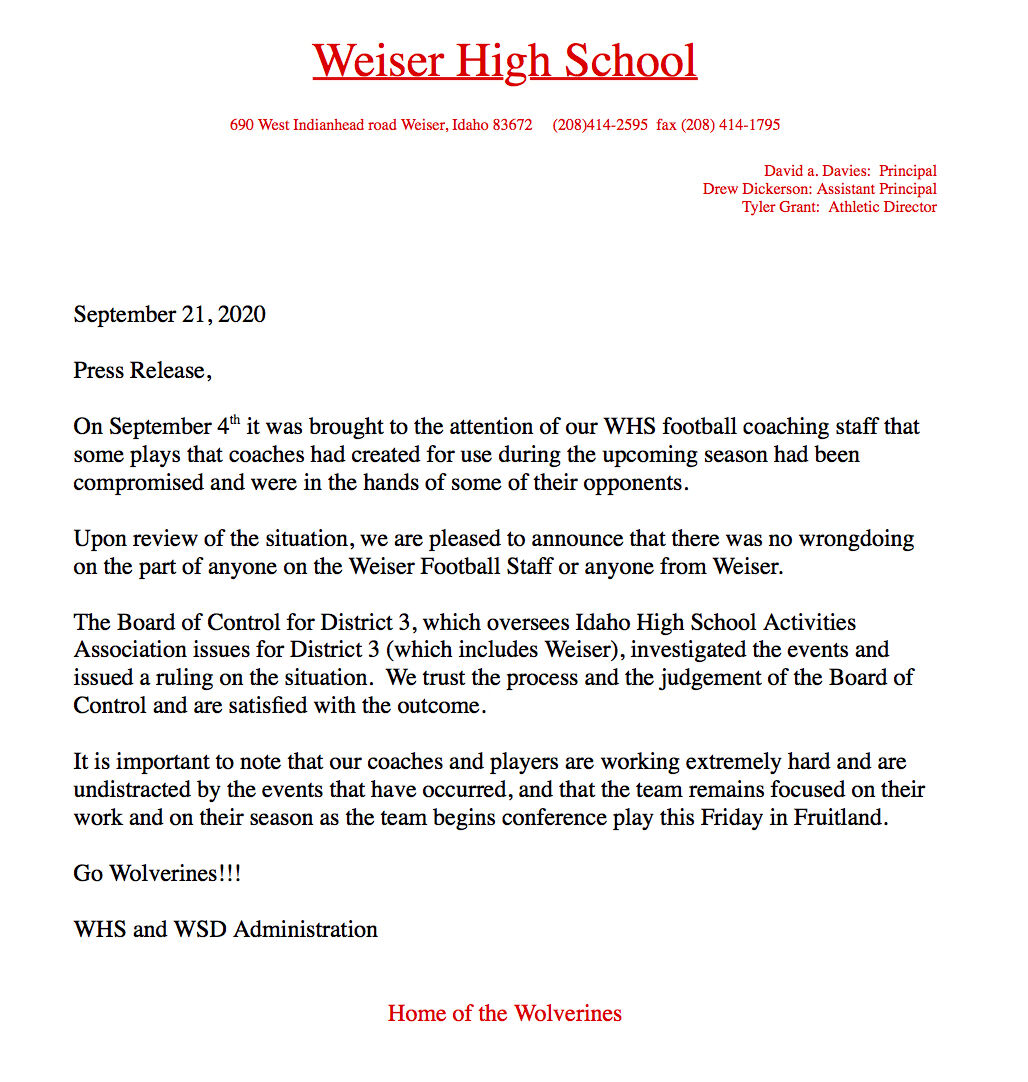 Tracy said he hopes that Friday’s game will not be affected by the situation, and hopes to see a good game between two of the Snake River Valley district’s fiercest rivals.

The game against Weiser will be the second game of Tracy’s suspension. The Grizzlies played at New Plymouth on Sept. 18 without Tracy.

The news of the incident was first officially discussed by Weiser High School, who sent out a news release on the matter on Tuesday morning.

In the release that was signed by members of school administration, including Principal David Davies, Assistant Principal Drew Dickerson and Athletic Director Tyler Grant, it was officially announced that the District III Board of Control had investigated the matter that took place early in September.

According to the release, the Weiser football staff said that some of their plays “had been compromised and were in the hands of some of [our] opponents” on Sept. 4. On that day, the Wolverines lost to Emmett 42-14.

“Upon review of the situation, we are pleased to announce that there was no wrongdoing on the part of anyone on the Weiser Football Staff or anyone from Weiser,” the release states. “… We trust the process and the judgement of the Board of Control and are satisfied with the outcome.”

Later that day, Emmett School District Public Information Officer Vickie Holbrook sent out a news release explaining the school’s side of the situation, including some of the penalties that the school is facing from the Board of Control. The release did not specify if Rich Hargitt himself was disciplined by the Board of Control, which would qualify as a personnel issue with the school.

In the release, Emmett High School Principal Wade Carter announced that the school had to pay a $750 fine and head football coach Hargitt issued an apology for not reporting to Weiser that “hand-drawn plays were texted to him in July.”

“We’ve also sent a letter of apology, accepting full responsibility for the error in judgement made by our head football coach and members of our football staff,” Carter said in the release.

According to Holbrook, the Weiser plays were discovered on the back of the Emmett scout book, which was found on the practice field at Emmett High School on Sept. 4, before the game against Weiser.

“We accept full responsibility and accept the punishment handed down from the District 3 Board of Control. After conducting an internal investigation and meeting with our head coach, it was clear he was remorseful and realized the gravity of the error. We feel confident nothing like this will ever happen again,” the letter from Carter, which was sent to Weiser High School on Tuesday, reads.

When members of Emmett High School administration, Carter and Athletic Director Gavin Watson, discovered the situation, the school conducted an internal investigation and self-reported it to the District III Board of Control.

The releases from Weiser and Emmett did not name Fruitland in any way.

We don’t want to be judged on our worst decision we’ve made. Because we’ve all made them.

Grizzlies grind out win over Weiser

I’m sorry, that coach needs to be suspended for the remainder of the season and renewal of his next contract, tentative.