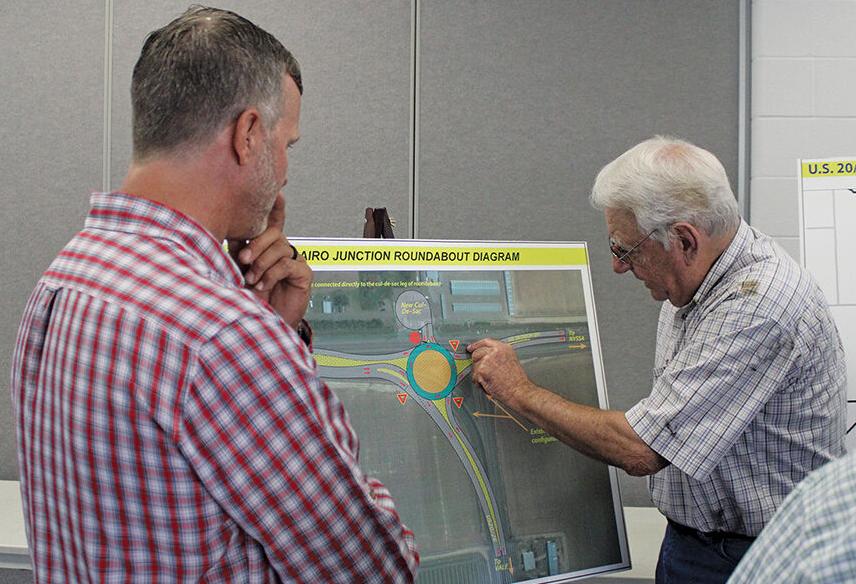 Dirk DeBoer, right, discusses a chart showing the proposed roundabout at Cairo Junction with Sean Maloney, with Oregon Department of Transportation, prior to an open house about the project at the Four Rivers Cultural Center on Thursday evening. 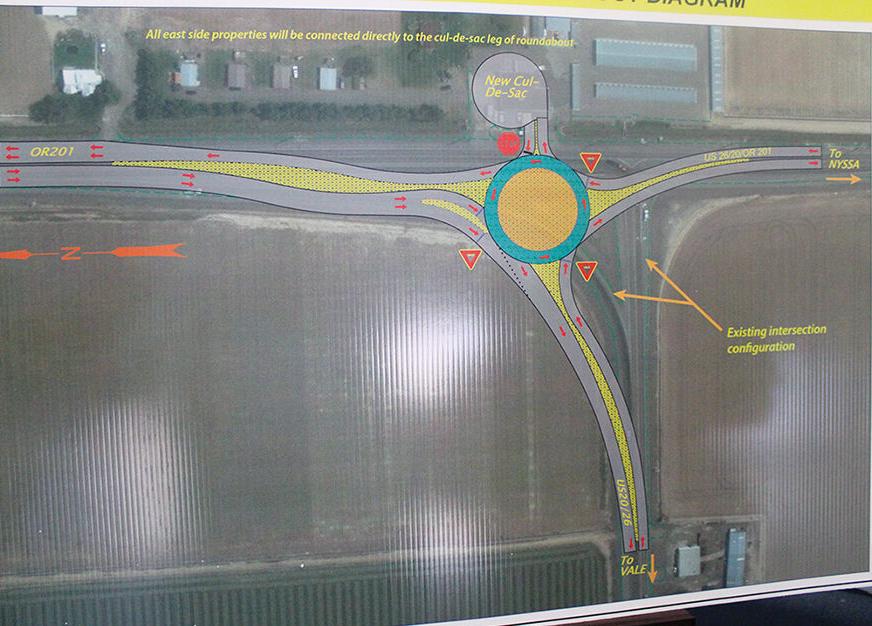 This is the latest drawing of the proposed roundabout which was shown during the open house Thursday at Four Rivers Cultural Center.

Dirk DeBoer, right, discusses a chart showing the proposed roundabout at Cairo Junction with Sean Maloney, with Oregon Department of Transportation, prior to an open house about the project at the Four Rivers Cultural Center on Thursday evening.

This is the latest drawing of the proposed roundabout which was shown during the open house Thursday at Four Rivers Cultural Center.

Their main argument is that there will be fewer, less-damaging accidents with a roundabout than with signal lights, one of the common suggested alternatives.

Preliminary designs show that traffic moves through the roundabout in a counter-clockwise direction, with dedicated right turns lanes for traffic coming from the north (Ontario) turning toward Vale, and traffic from the west (Vale), turning south toward Nyssa.

Access to properties adjacent to the roundabout will be provided safe entrances and there will be a special lane dedicated for super-sized loads, which will be gated and available for use in the few occasions the loads come through. Also, the whole roundabout would be shut down to accommodate the super loads, which would move during the night.

Current plans call for construction to begin in 2023.

Kevin Haas, ODOT’s main spokesperson for roundabouts, said the sole purpose of the structures is to address safety issues. However, other benefits of roundabouts include a reduction in delays, reduction in emissions, and fuel savings as vehicles are not waiting at a stoplight.

Estimated construction cost for the Cairo roundabout, based on costs of building other roundabouts was $3 million to $4.5 million. The estimated cost of a fully-signalized intersection is $2.5 million.

Vicki Winegar, and her husband Ray, own property immediately on the north side of the intersection and U.S. Highway 20-26 and Oregon Highway 201, to the east.

“I’m really upset,” Vicki Winegar said, noting some of their property was taken when an earlier widening at the junction was done and now the new project will be taking more.

She said that the design of the proposed roundabout will make it more difficult for farmers to get through traffic to get into those fields.

Ontario resident Bruce Hunter said ODOT planners need to be more amenable to the needs of property owners, sharing that one of his fields was split with the construction of the Yturri Beltline, creating extra travel to farm just a few separated acres.

Sean Maloney, with ODOT, said the project would take no more than 2.5 additional acres.

Lt. Rich Harriman, Malheur County Emergency Services director, said ODOT officials needed to be sure of their data they used to support construction of a roundabout.

“I was against it,” Malheur County Commissioner Don Hodge said, about when the roundabout was brought up in earlier discussions.

However, on Thursday, after hearing the presentation, Hodge indicated he would support it.

The roundabout is part of an ODOT project to improve U.S. Highway 20 as a freight route and restricted to some trucks because of the curves in the Malheur River canyon, between Harper Junction and Juntura, Maloney said. The freight route project also will include a parking area along the Yturri beltway for trucks pulling off the freeway when it is shut down.