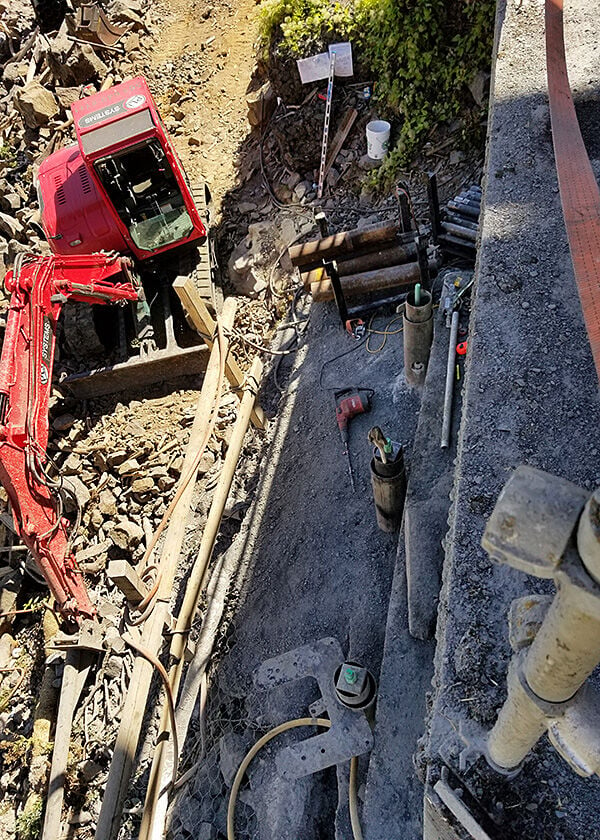 Several micropiles have been installed and grouted into place. These micropiles will secure this section of fishway which will stabilize movements at this joint. 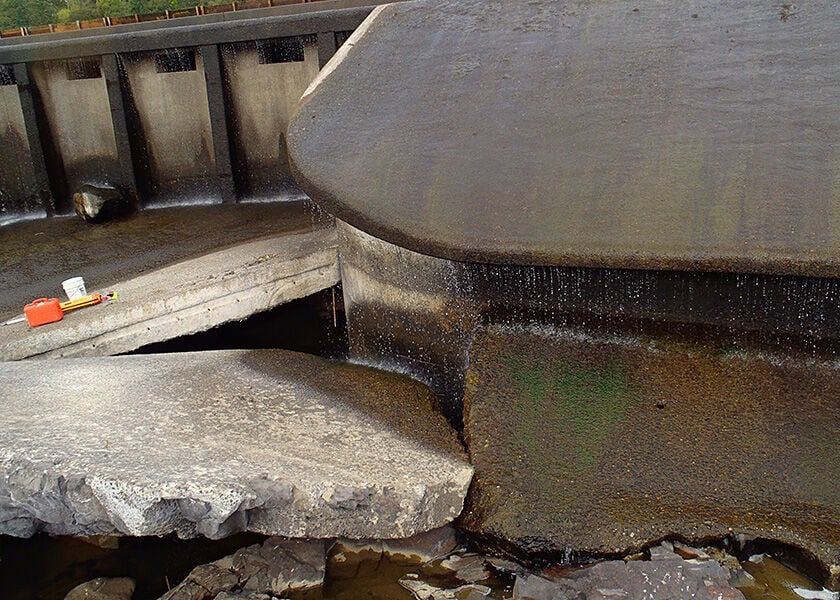 The spill apron at the base of the fishway is dislodged and the gravel under the slabs has scoured away. Without this protection in place, the fishway is at risk for damage.

Several micropiles have been installed and grouted into place. These micropiles will secure this section of fishway which will stabilize movements at this joint.

The spill apron at the base of the fishway is dislodged and the gravel under the slabs has scoured away. Without this protection in place, the fishway is at risk for damage.

Work is underway to repair the fishway system at Willamette Falls. Anglers and other users of the river may be seeing barge traffic as construction materials are transported from down river to the channel leading up to the cul-de-sac and notice fish counts are not being updated.

The fishway has several areas that need attention due to ongoing issues with stability: one of the concrete aprons at fishway leg 2 has become dislodged, a structural joint on the transport channel needs to be reworked to allow for movement, and a tensioning system needs to be added at fishway leg 1. These need to be repaired to protect the structure from future scour at fishway leg 2 and to stop separation of the structure at leg 1, which could lead to failure of the fishway in the near future if left unfixed. This work is being funded through a grant from the Fish Restoration and Enhancement Board, which is funded by recreational and commercial fishing license fees.

Work on the project requires the shutdown of all the fish ladders in the fishway system. Any fish using the system will be delayed in their migration until after work on the fishway is completed, which is expected to be mid-October at the latest.

There is an in-water work period for this section of the Willamette River from July 1-Oct. 31. (In-water work periods are times outlined by fish biologists, when work in waterbodies is allowed because impacts to fish, wildlife and habitat will be minimized.) Based on this, river conditions, and other factors, ODFW chose this time period to do the work to have a minimal impact on sensitive populations of anadromous fish—particularly species considered Threatened under the federal Endangered Species Act (upper Willamette winter steelhead and spring Chinook).

Coho salmon, which are not listed as threatened, are the primary fish species using the ladder in the fall. The coho that normally start to pass through the ladder around this time of year will stay downstream of the falls until the ladder reopens. Based on the 10-year average run timing, about half of the coho salmon run does not migrate over the falls until after Oct. 1. Peak spawning of coho in upper Willamette tributaries typically occurs from mid-November through mid-December, meaning coho will still have time to reach their spawning grounds when the fish ladder reopens by mid-October. The impact of the closed fishway on coho populations is expected to be minimal.

Doing the work during this period avoids the time of year when Threatened species upper Willamette steelhead and spring Chinook use the fishway. Nearly 95 percent of hatchery summer steelhead will have also migrated upstream of the falls by late August. (The fishway was closed on Aug. 27.)

“Our biggest concern is a catastrophic failure of the fish ladder that would keep any fish from using the ladder, particularly threatened upper Willamette winter steelhead and spring Chinook,” said Ryan McCormick, ODFW Chief Engineer. “This would keep fish from migrating upstream for years and would significantly threaten these already fragile populations, so it’s critical we take steps now to fix the fish ladder.”

Anglers and others using the river around the falls are reminded to observe restricted areas and are asked to exercise caution as equipment will be moved to and from the site by barge.