Burger fans back up traffic for blocks to bid adieu, get one last bite from current owners 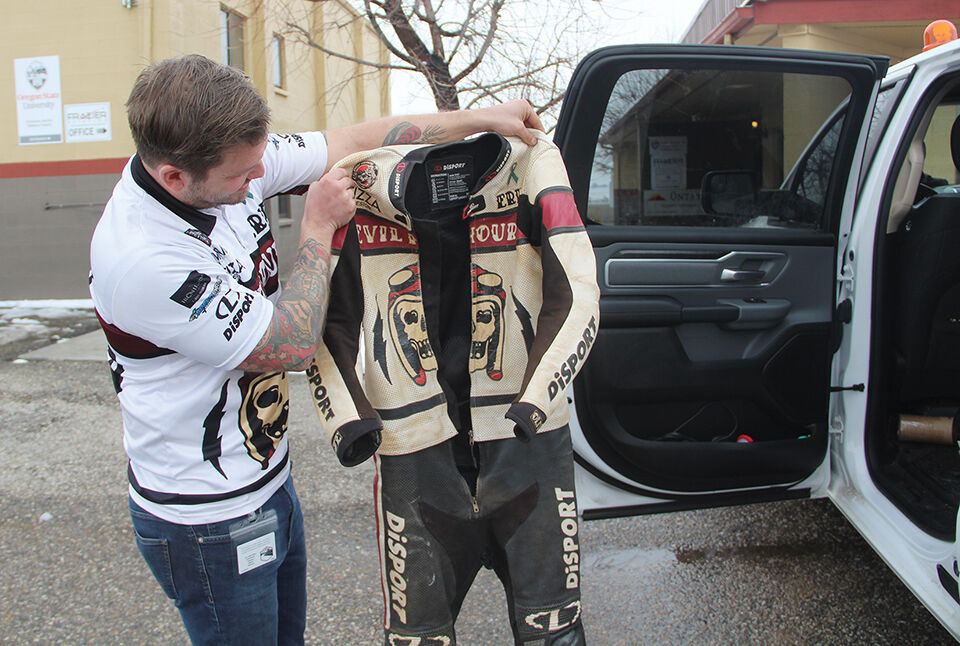 Erik Hartley, manager of the Ontario Municipal Airport, holds up a racing suit on Friday at the airport. He wears the suit for racing activities associated with Evil Hours Racing, a nonprofit Hartley launched to make a difference for those experiencing post-traumatic stress disorder. 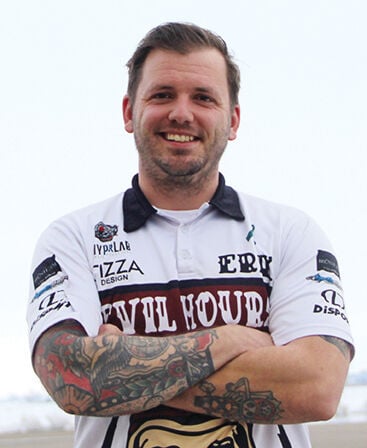 When he’s not managing Ontario Municipal Airport, Erik Hartley who was recently hired to run the operation is running a nonprofit, too.

As the executive director of Evil Hours Racing, Hartley, an Afghanistan War veteran is literally — and asking others to join him — to make a difference for those experiencing post-traumatic stress disorder.

According to the website, the nonprofit engages in flat track motorcycle racing with a twist.

“ … to use our platform to connect, inspire, and support veterans and victims of post-traumatic stress,” reads the website.

In a phone interview on Thursday afternoon, Hartley explained more about the nonprofit organization and how flat track motorcycle racing is making a difference in the lives of veterans with PTSD.

He said that for veterans experiencing PTSD, there are a lot of feelings associated with the condition including being afraid to upset others, feeling shame or weak and wanting to keep the struggle a secret.

Hartley, who is a veteran of the United States Air Force, himself had struggled with this condition which was made up of “a lot of stuff” including how he thought of his role as “just a mechanic.” It wasn’t until much later that he realized the importance of his contributions.

“I didn’t give myself enough credit for the things I did,” said Hartley.

Shaking off the stigma

In dealing with his own PTSD, Hartley said that he learned more about the condition and learned to “stop feeling guilty” about how he was feeling, including feeling “lost and alone” for years while he traveling from one part of the world to the next.

“I didn’t know it bothered me as much as it did,” he explained.

Hartley said that he tried his best to explain away his symptoms by saying that random outbursts were “hereditary.”

It wasn’t until his son began “emulating his outbursts” that he knew he needed to seek out treatment.

A sense of belonging

Hartley described his first exposure to an outlet that made a difference in his life — flat track motorcycle racing. He said how when he visited one of these events for the first time, he saw how the participants formed a community and he “felt like he belonged.”

“It just rocked me,” said Hartley.

He said that after the experience, he got his own motorbike and “just took off from there.” Hartley detailed how, what he noticed, is that veterans suffering from PTSD “organically click” with flat track racing and he saw this opportunity to help others and started “Evil Hours Racing.”

Hartley said the name “Evil Hours Racing,” comes from his time deployed to Afghanistan during the conflict with the Taliban.

He detailed how kite flying was a national pastime in Afghanistan prior to the Taliban outlawing it and other sports.

Hartley said that over time he started to see kite-flying make a comeback in the country, but along with it came serious threats as well. He said how there would be Taliban troops waiting “in the hills” above where he and other service members were stationed. Hartley described the situation in which Taliban members would dress in women’s clothing, including a hijab, the traditional head covering for women of the Muslim faith, and blend in with women and children and fly kites of their own as a signal to the troops waiting in the hills.

“A kite would go up and mortar would follow,” he said, adding that it was “like clockwork.”

Hartley said that when he and the other troops would see kites going into the air, they knew what would come next and dubbed those hours of waiting as “the evil hours.”

Hartley told of how Evil Hours Racing, since its inception, has made a difference in the lives of veterans living with PTSD, highlighting a time in which he was contacted at 3 a.m. in the morning by someone in need of help how they reached out to him after seeing the organization’s website.

“We want to help those that need it,” he continued, saying how members all “stay in touch” with each other because “this nonprofit is a family.”

Evil Hours Racing’s mission was explained by Hartley prior to the interview when he wrote in an email, “We use our racing platform to engage and breakdown stigmas associated with seeking help. Our main objective is to send vets to learn how to race motorcycles, as well as send them to work in the pits on race day for the pros!”

Hartley used a racing metaphor to illustrate what this experience is like saying, “The hardest mile to come home is the last one.”

Hartley said that he wanted to create a brand with Evil Hours Racing, including art that would “make us look cool” and be recognizable and draw attention to the organization.

He said that Ontario is “a new home base” and wants to “establish roots” in the community.

For people living with PTSD, Hartley said, “The spectrum is all over the place, if you have it, don’t think like you don’t belong.”

He noted that Evil Hours Racing may be a “small nonprofit, but we’re connected.”

Hartley said the organization is made up of volunteers and always welcomes donations.

“We want to give somebody hope,” he said.

On Friday, Hartley was heading to a race in Tacoma.

Check out the organization Hartley rides for online at www.evilhoursracing.com.

“Post-traumatic stress disorder (PTSD) is a disorder that develops in some people who have experienced a shocking, scary, or dangerous event.

It is natural to feel afraid during and after a traumatic situation. Fear triggers many split-second changes in the body to help defend against danger or to avoid it. This “fight-or-flight” response is a typical reaction meant to protect a person from harm.”

Thank you for sharing this story!