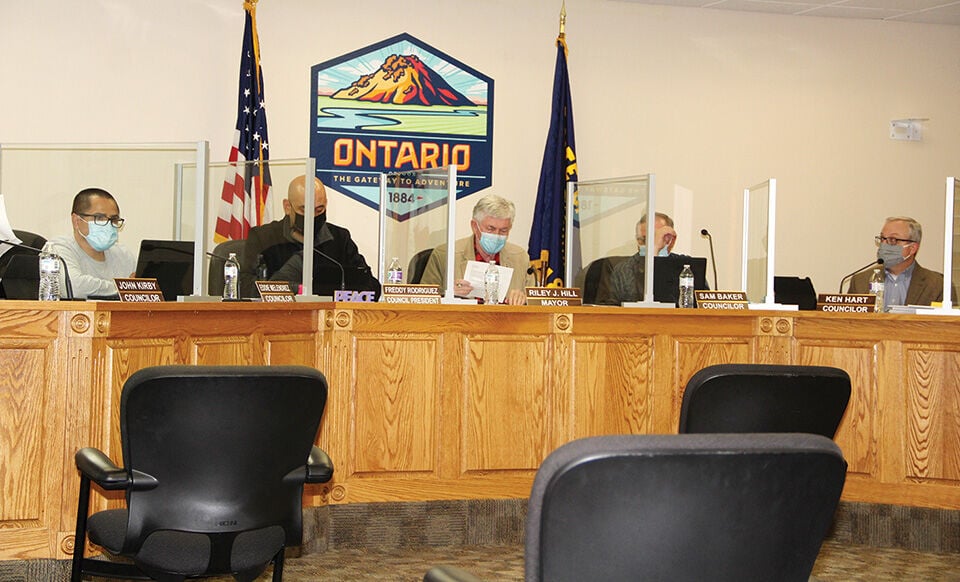 Members of the Ontario City Council are pictured during a regular meeting on Feb. 23, 2021. 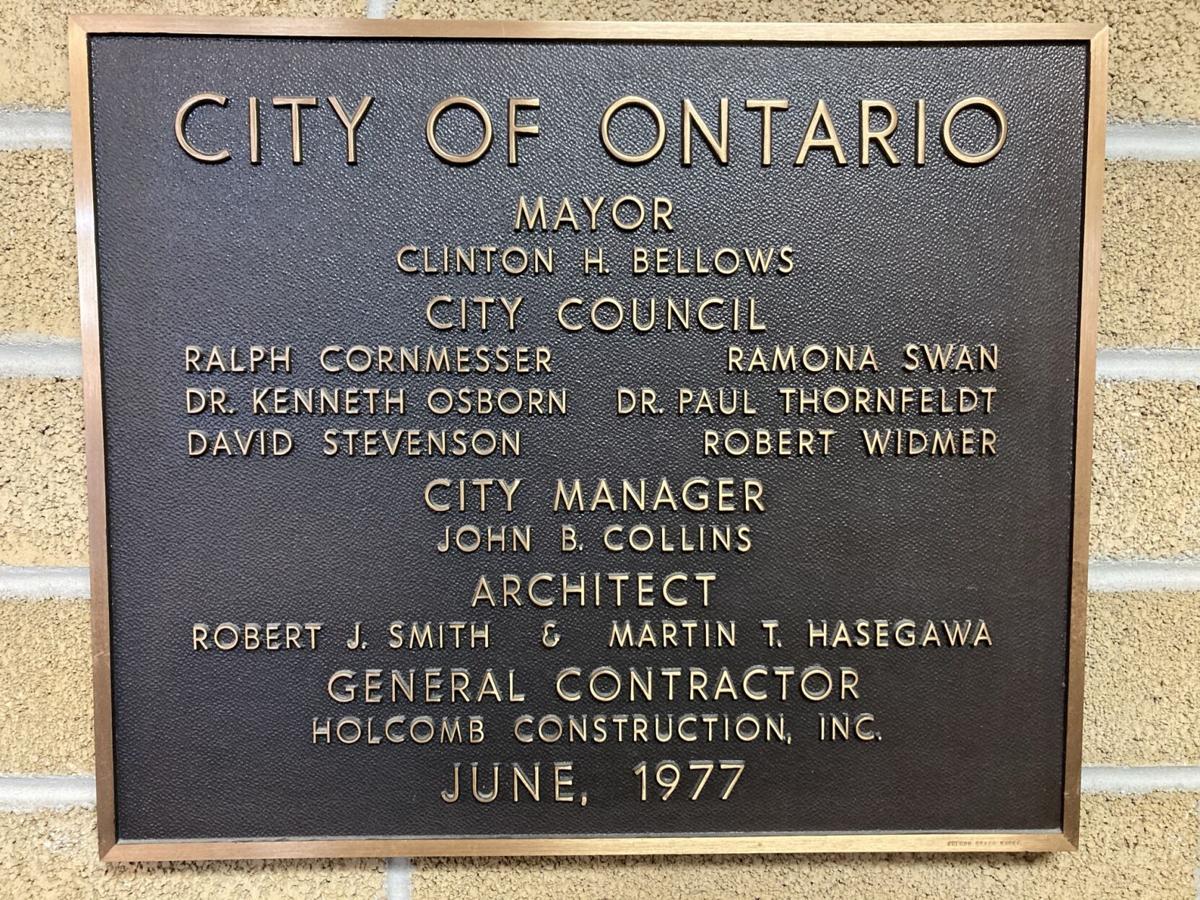 This plaque names the city officials which were in office or on the payroll at the time Ontario City Hall was constructed in 1977. 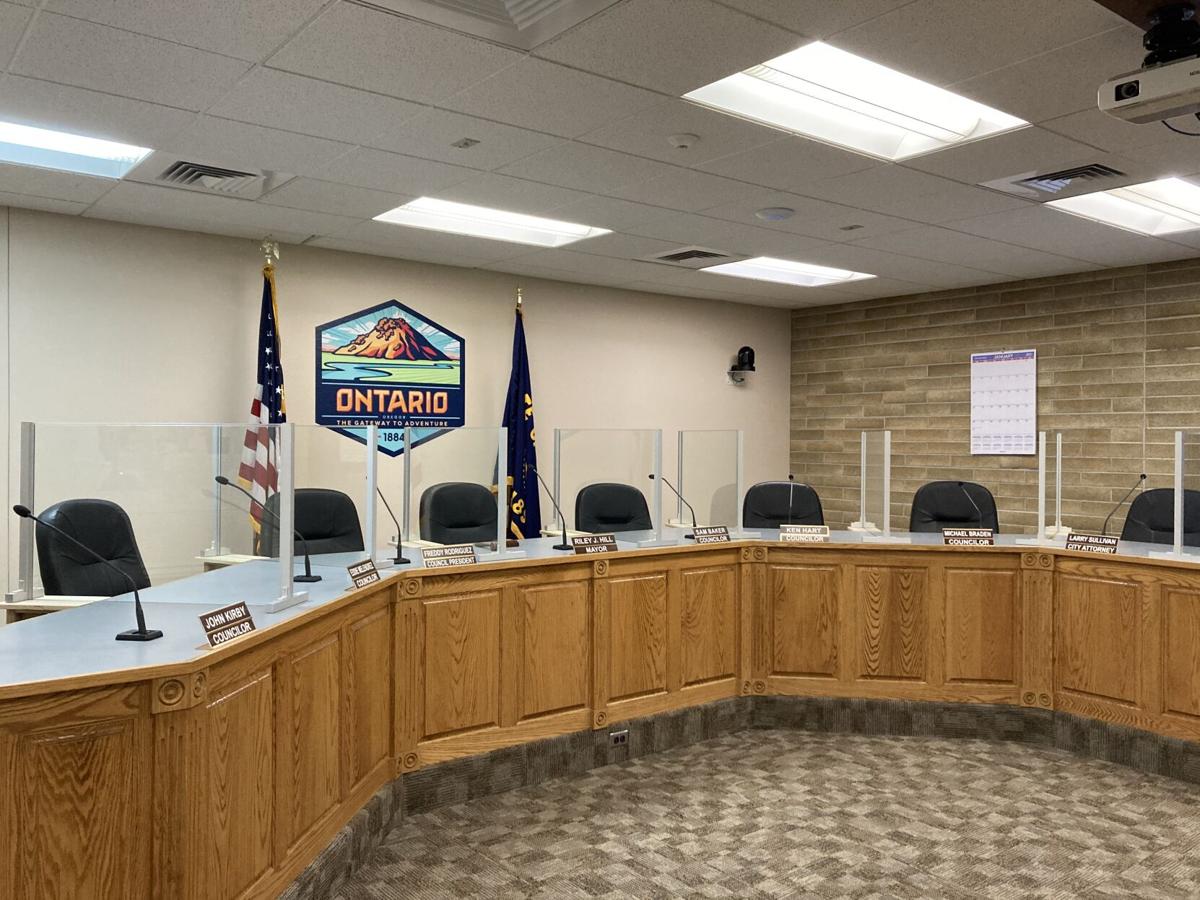 This is a glimpse of the Ontario City Council chambers after the plexiglass partitions were added in early 2021.

Members of the Ontario City Council are pictured during a regular meeting on Feb. 23, 2021.

This plaque names the city officials which were in office or on the payroll at the time Ontario City Hall was constructed in 1977.

This is a glimpse of the Ontario City Council chambers after the plexiglass partitions were added in early 2021.

ONTARIO — When the COVID-19 pandemic gripped the world, officials with the city of Ontario had to make necessary changes to the way things are done, in particular, how the day-to-day operations at City Hall were conducted.

Closures and an outbreak

Officials and staff who routinely used City Hall for work had to make adjustments, as the building closed to the public on March 23. However, the building did reopen during the second phase of Reopening Oregon, which happened on June 8.

The reopening was short-lived as City Hall had to be closed down for a second time on July 1. The announcement was made on the city of Ontario’s Facebook page with the words “until further notice” following.

The second closure was in response to an outbreak of COVID that occurred in early July.

The building was subsequently cleaned with an electrostatic sprayer following the closure.

The closure of City Hall meant the retooling of meetings and how they were conducted, including Ontario City Council meetings.

The use of virtual meeting platforms and conference calls became standard operating procedure with the closure of City Hall. Technology to stay connected is one way city officials adapted to change in the face of adversity.

Assistant City Manager Peter Hall provided more information about how changes throughout the pandemic impacted the city in an email about the city’s response.

“What instantly comes to mind is the discussion our leadership team had very early on about how we continue to deliver services to our community with the obstacles that were now in place. For a lot of municipalities, that meant looking at our digital reach. We were fortunate to have previously implemented online bill pay for customers paying their utility bills and we made a big push to ensure that citizens knew this was available,” wrote Hall.

In addition to what has already been done, he also noted that the council made the decision to “move forward with additional online services that we will be launching soon.” All of these services will include permits and licensing.

Hall described how city officials are making access to City Hall significantly easier with its online presence that it is creating.

However, he did say that staff and officials are aware that there are some people who do not have access to or are not comfortable with technology, and he explained how the city actively addresses this.

“To ensure no one is missed, we have posted signage in front of city hall regarding alternative ways of doing business with the City. That can be anything from directing people telephonically or scheduling appointments where we can arrange a safe and compliant atmosphere to conduct business.

Reaching out a hand

Hall said that another issue officials addressed and is continuing to address is offering assistance to “individuals and businesses who are struggling.”

He said that city officials, in a move to provide assistance to those in the community who need it, temporarily ceased utility shut-offs for late and missed payments.

The city “worked with restaurants this winter” to experiment with outdoor dining by providing large tents or canopies, along with outdoor heaters and an initial supply of propane to get started off with.

How did it go?

In closing, Hall summed up how the past year has been in light of the myriad changes that had to be made.

“I won’t say that everything has gone smoothly. I think we can all relate that the past year has thrown everyone plenty of curveballs. What I can say is that our community has been patient during these times and has provided great feedback on how we can work together. We will continue to adapt to change, but our focus will always remain on serving our citizens.”