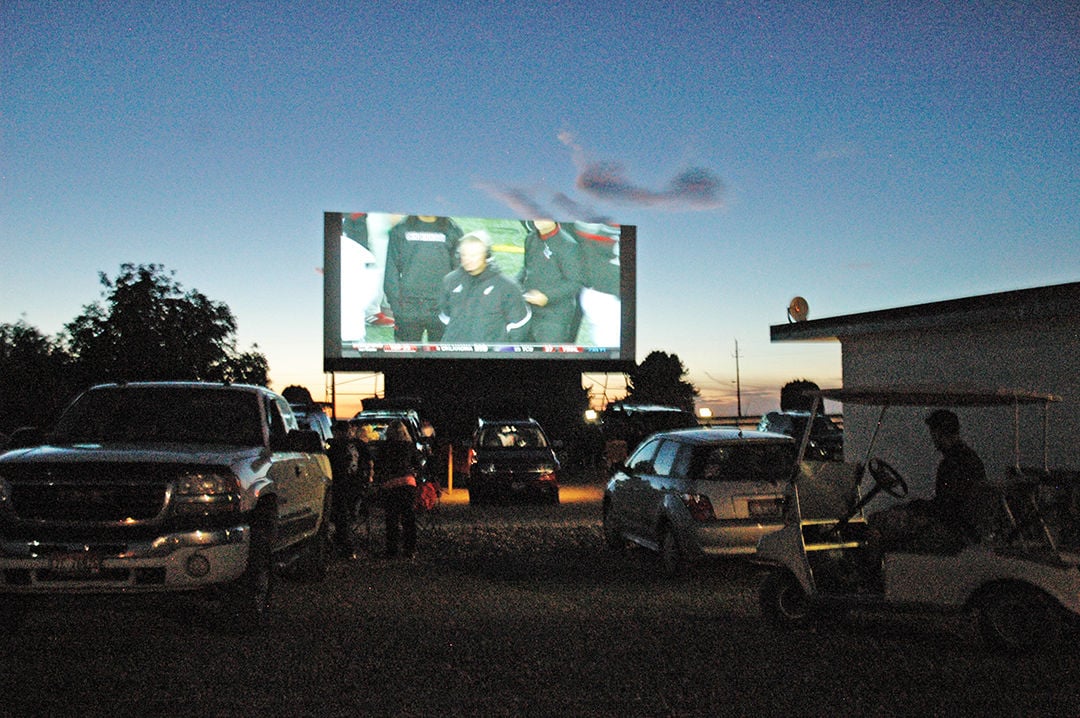 A crowd gathers at Parma Motor-Vu on Oct. 2014, when the drive-in theater hosted a tailgate and projected a Boise State football game. The Motor-Vu opened for the season later than expected due to the COVID-19 pandemic. 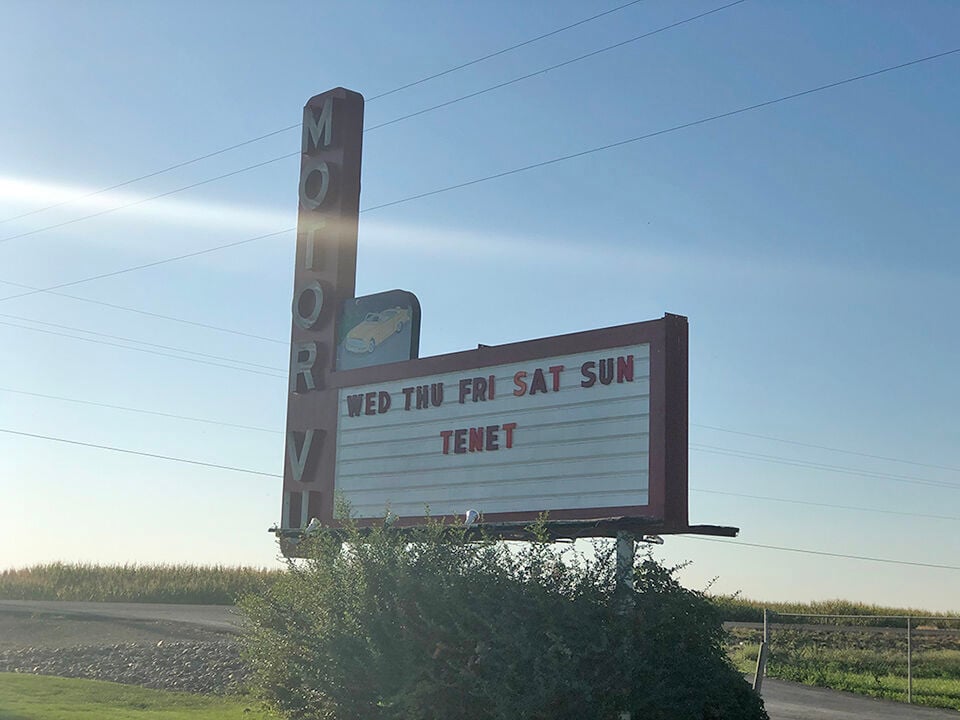 The marquee for Parma Motor-Vu announces "Tenet" was the film being screened for that week last summer, it was one of the first big budget studio films to be released to theaters since the onset of the COVID-19 pandemic. 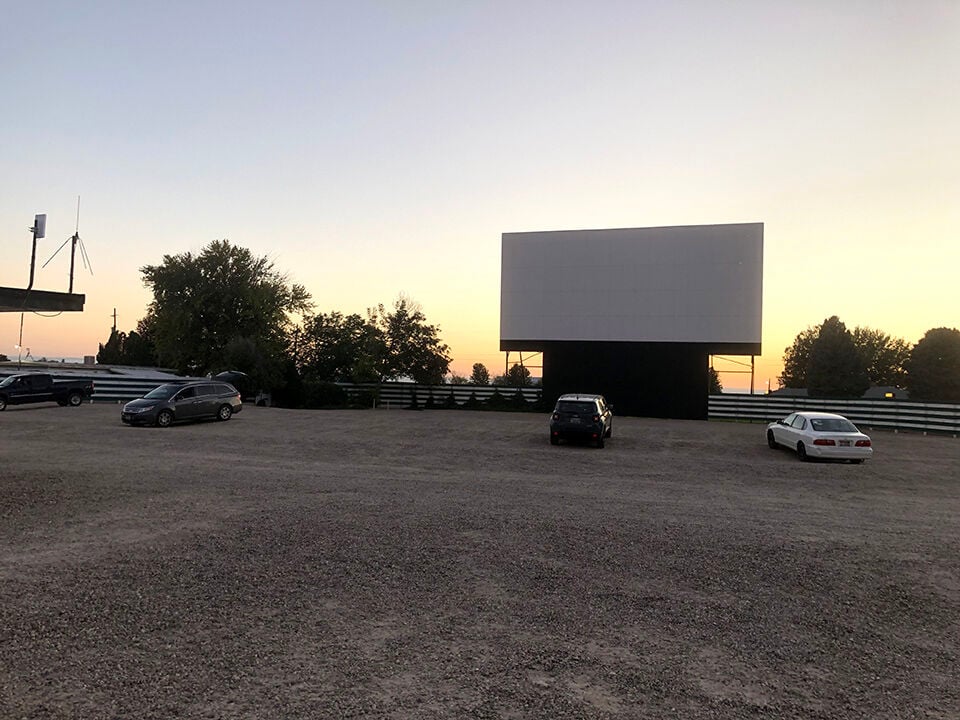 Early arrivals seeking to see some sci-fi action at Parma Motor-Vu find their spots during sunset prior to the first showing of the film "Tenet."

A crowd gathers at Parma Motor-Vu on Oct. 2014, when the drive-in theater hosted a tailgate and projected a Boise State football game. The Motor-Vu opened for the season later than expected due to the COVID-19 pandemic.

The marquee for Parma Motor-Vu announces "Tenet" was the film being screened for that week last summer, it was one of the first big budget studio films to be released to theaters since the onset of the COVID-19 pandemic.

Early arrivals seeking to see some sci-fi action at Parma Motor-Vu find their spots during sunset prior to the first showing of the film "Tenet."

Don’t start the engines. Douse the lights, too.

But do turn on the radio, movies are a lot better when they have sound.

Since 1953, the Parma Motor-Vu has entertained local audiences with films ranging from all genres.

The release of first-run movies is something that Parma Motor-Vu is known for, often showing a double feature.

The vehicle capacity for the outdoor theater site is approximately 200 - 250 motor vehicles, which can potentially represent a lot of viewers.

As one of Idaho’s only drive-in movie theaters, Parma Motor-Vu, serves up a lot more than just movies, it has a full-service snack counter, which includes popcorn popped in a vintage machine that has been serving local moviegoers for decades.

Since the onset of the COVID-19 pandemic, businesses shuttered in response to the statewide public health mandates that were implemented to limit social gatherings.

In 2020, the Parma Motor-Vu, which was slated to open for the season much sooner than it did, the opening was postponed due to a statewide “stay at home” order from Idaho Gov. Brad Little issued as a preventative measure against COVID-19, due to contact being made with customers at the box office. The business had to remain closed until an OK was given, which did not happen until nearly a month later.

Procedures for ordering from the snack bar had to be altered for the opening as additional precautions were taken, including all orders dispensed out the door.

The first features to play for the theater’s season-opener in late April were “Onward” and “Call of the Wild.”

In the months that followed, it was unknown whether movie studios would be willing to release their films to theaters considering how many indoor theaters were closed due to statewide orders shuttering those businesses.

As it turned out, only a handful of new movies made it to theaters, drive-in or indoor. Some of the titles included sci-epic “Tenet,” X-Men spinoff “The New Mutants” and “Bill and Ted Face the Music,” the most recent entry into the “Excellent Adventure” franchise, among them.

As recent as the early 1990s, movie theaters used the term “held over” in print newspaper advertisements to denote a movie that was popular enough to stay at that theater location for at least one more week.

The theater did the same for itself in staying open into October and giving the community an outlet for a movie or two under the stars. In doing so, the Motor-Vu showed John Carpenter’s original 1978 “Halloween.”

Movies are not the only events that bring people to the Motor-Vu, sometimes it’s a prerecorded concert offered as a special engagement. Two of the concerts that were offered at there included Garth Brooks and Metallica.

In addition, the theater has shown some movies that have become more like events. Susan Haaheim, the current owner and operator of the theater, highlighted two such movies, “Grease” and “Footloose,” saying these movies are “two classics that people love to sing along to!”

Both of these movies were shown at the theater, incidentally, the version of “Footloose” that Haaheim was referring to is the 1984 original starring Kevin Bacon, not the 2011 remake starring Kenny Wormald.

Haaheim said that over course of that season, the theater was the site for multiple non-movie events happen as well.

“We actually had quite a few memorable moments last season. Multiple High School graduations, cars were decorated for the graduates, one school even brought a flatbed trailer to make a stage,” she wrote in an email recounting the events.

Haaheim also said that she noticed an uptick in business.

“I would say there was an increase in demand for two reasons: Indoor theaters were closed for a while and folks didn't have many options for entertainment. The drive-in was a safe place to be entertained, yet distanced.”

She went on to say that she thought that the public health crisis “increased the interest in drive-in movies.”

As far as deciding what films to show, Haaheim said the process was not a difficult one.

“Each studio had their own repertoire of available films. There was really no negotiating, they had their terms set. I am blessed with reps that are wonderful to work with,” she wrote.

“Release dates are continuously changing, but I'm hopeful. I also anticipate having to play some of the classics, we will assess week by week. As always, the community can expect a great outing under the stars, with a beautiful picture on the screen and the best popcorn in the valley!”