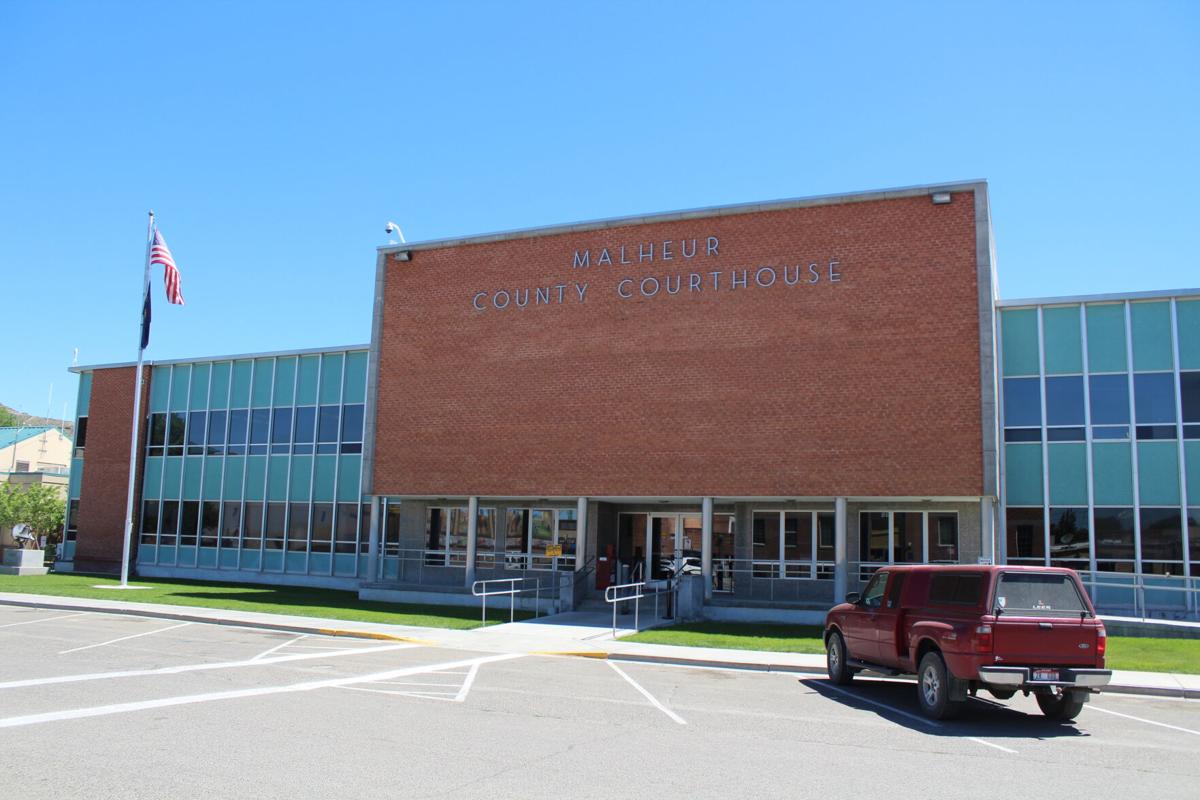 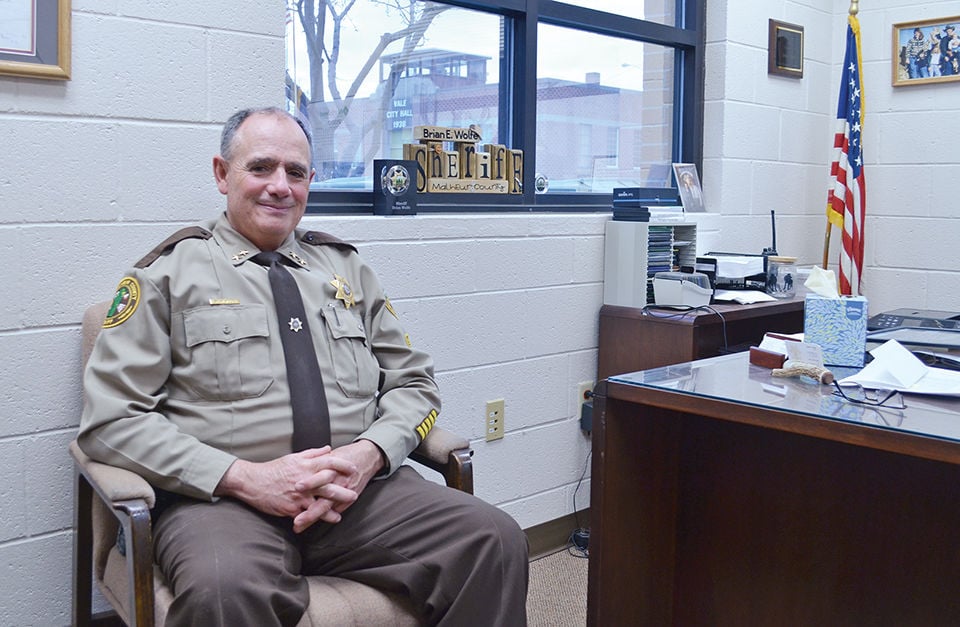 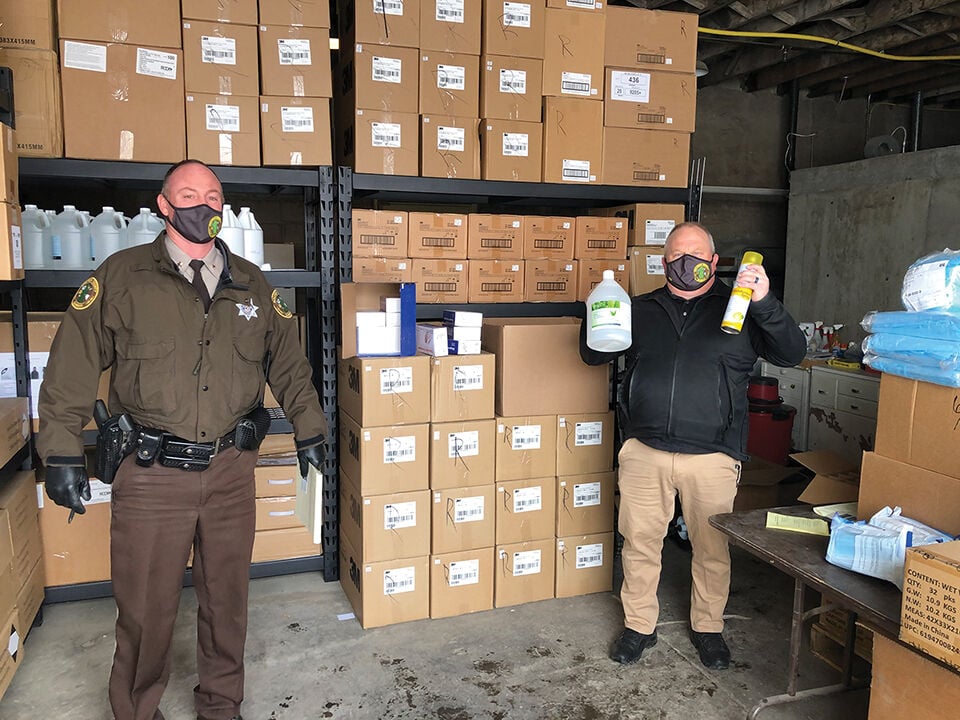 Malheur County Undersheriff Travis Johnson, left, and Lt. Richard Harriman, who oversees emergency management for the county, pass out COVID-19 supplies for small businesses with fewer than 100 employees on Monday.

Malheur County Undersheriff Travis Johnson, left, and Lt. Richard Harriman, who oversees emergency management for the county, pass out COVID-19 supplies for small businesses with fewer than 100 employees on Monday.

MALHEUR COUNTY — Election night was a little different this past November with the Malheur County Court House locked down because of the COVID-19 pandemic, but because of the changing nature of posting voting results online, there has not been any reason to keep the doors open past the normal closing time of 8 p.m., for several elections.

However, precautions were taken for the counting boards and county staff to handle the counting of the ballots, according to County Clerk Gayle Trotter. Masks were worn, social distancing was in play and there was plenty of hand sanitizer to go around.

Because of the nature of their close work in some of the handling ballots and ballot envelopes, the social distancing was 4 feet instead of the recommended normal 6 feet, Trotter said.

Counting board members were not required to work and could opt out if they felt uncomfortable in participating. There were a few who chose not to participate, however, there were enough who did, so Trotter did not have to bring in extra people.

One issue was anyone who was there officially, from either party, to watch to the vote count, Trotter said, and making sure everyone was safe. Also if a ballot had to be recast because the machine kicked it out without counting it, it would take two people to go through the process.

Malheur County Court members issued their own Declaration of Emergency for the county March, 18, 2020.

“The Emergency Declaration and the Emergency Operations Office Center will help support county staff, first responders and health-care partners so we can quickly respond and utilize all available resource to best protest the health of our community,” said Malheur County Emergency Manager Rich Harriman.

With the front and side doors being locked, the public has had to make appointments with the department they want to do business with, otherwise business is being done by phone, email, fax or video.

Video meetings have included those of the County Court and Planning Commission.

“We rarely have foot traffic,” DuBois said, said referring to her end of the building.

To make things easier for the public, county officials installed a payment box off of C-Street West next to Bryant Street, behind the Court, not to be confused the Ballot Box in the front of the Courthouse.

The payment drop box is to be used for tax payments, the Juvenile Department, the Planning Department, Environmental Health, the Assessor’s Office and the Clerk’s office. People need to clearly mark or indicate which department a payment or paperwork is to supposed to go to.

While most entries are locked to the public, the south entry door is open to access the state courts and the district attorney’s office on the second floor, via the stairs on the east side or the elevator.

One of the most impacted department is the Malheur County Sheriff’s office which has the most direct involvement with the public through its law enforcement responsibilities and in particular the operation of the jail, which has been restricted.

Because of social distancing requirements, the number of inmates in the jail at any one time has had to be reduced, Sheriff Brian Wolfe said.

“It’s has hampered the efforts of law enforcement,” he said. His staff is responsible for the welfare of inmates and staff have had to takes steps to keep them safe. At full or near-full capacity, social distancing is not an option given the limited space in the jail cells.

Valley Family Health provides medical coverage at the jail under contract and Wolfe said and has helped getting things back to normal.

“There is no visiting,” he said.

Outside the jail, instead of making arrests, deputies are writing a lot of citations for people to appear in court but there have been mandatory arrests.