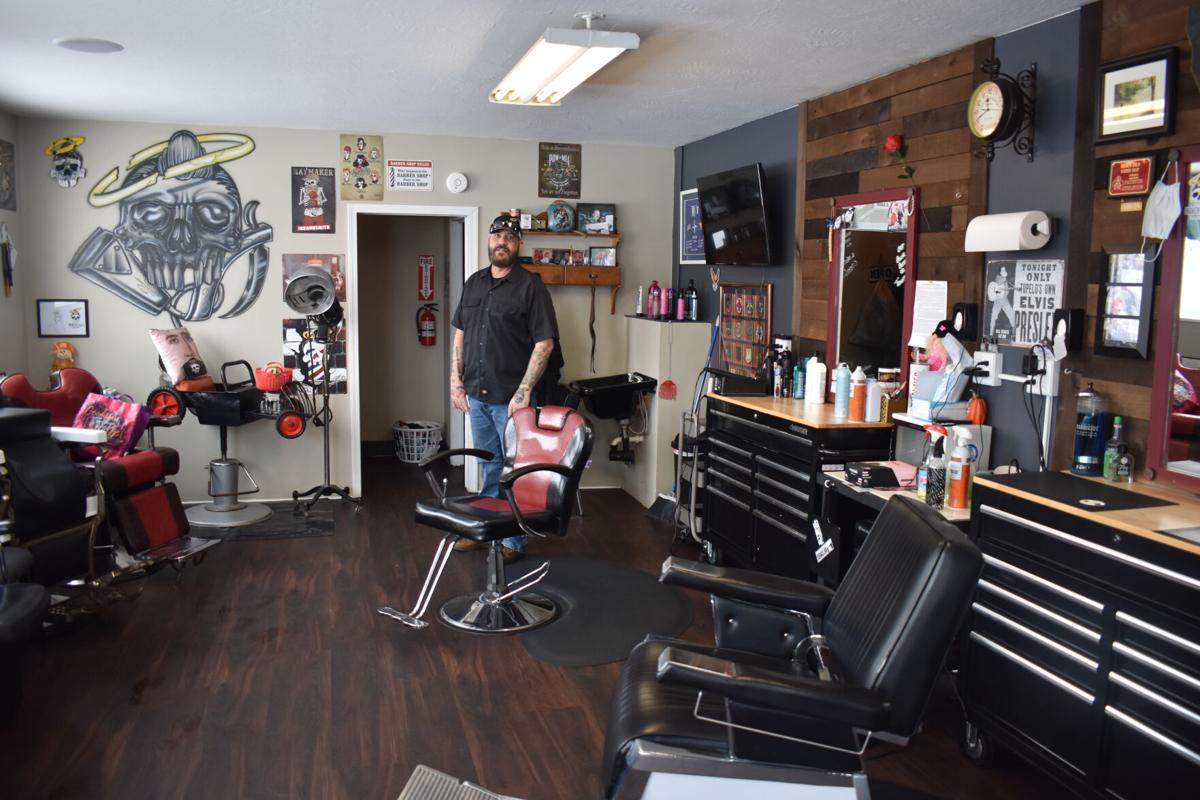 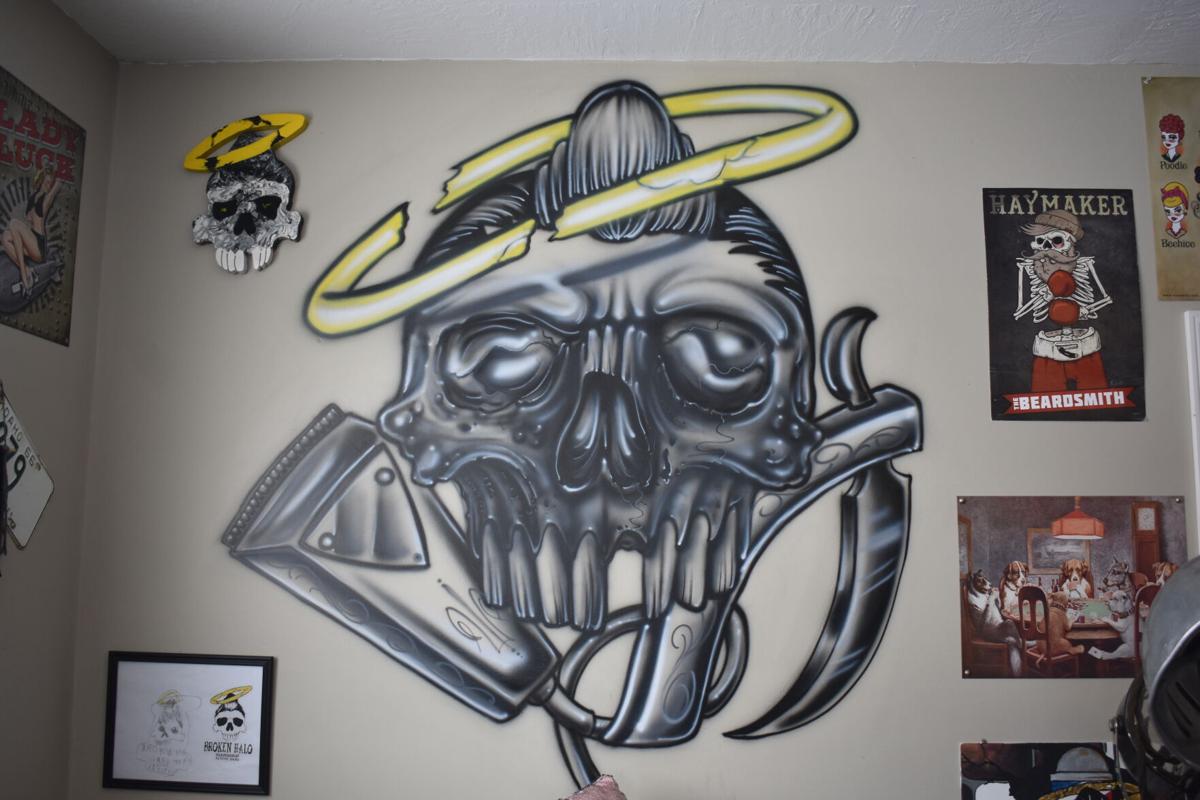 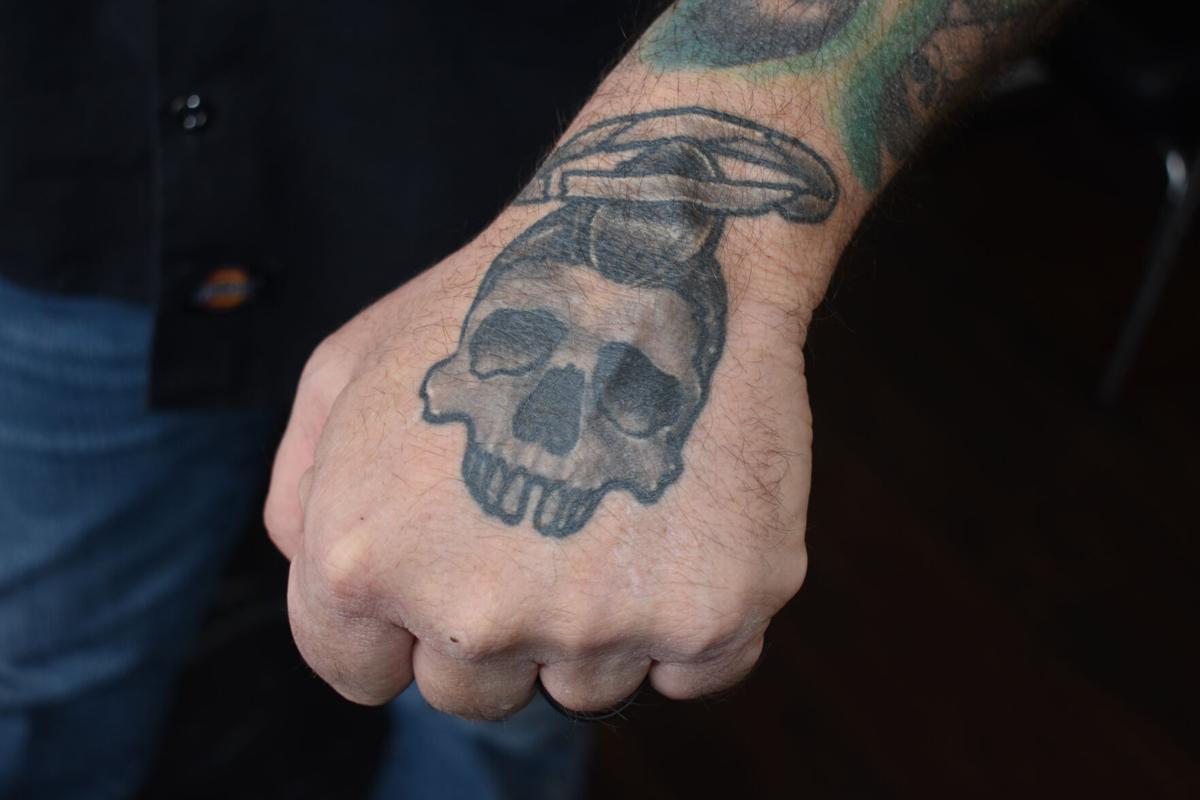 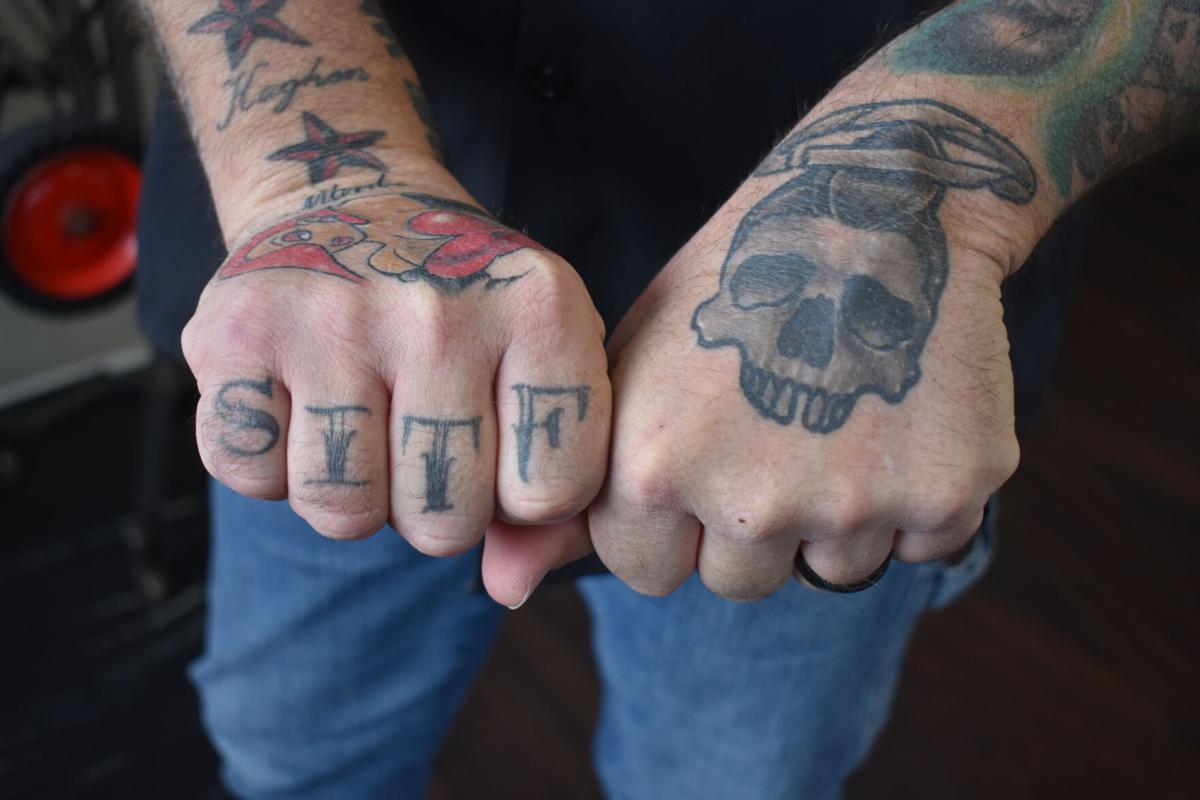 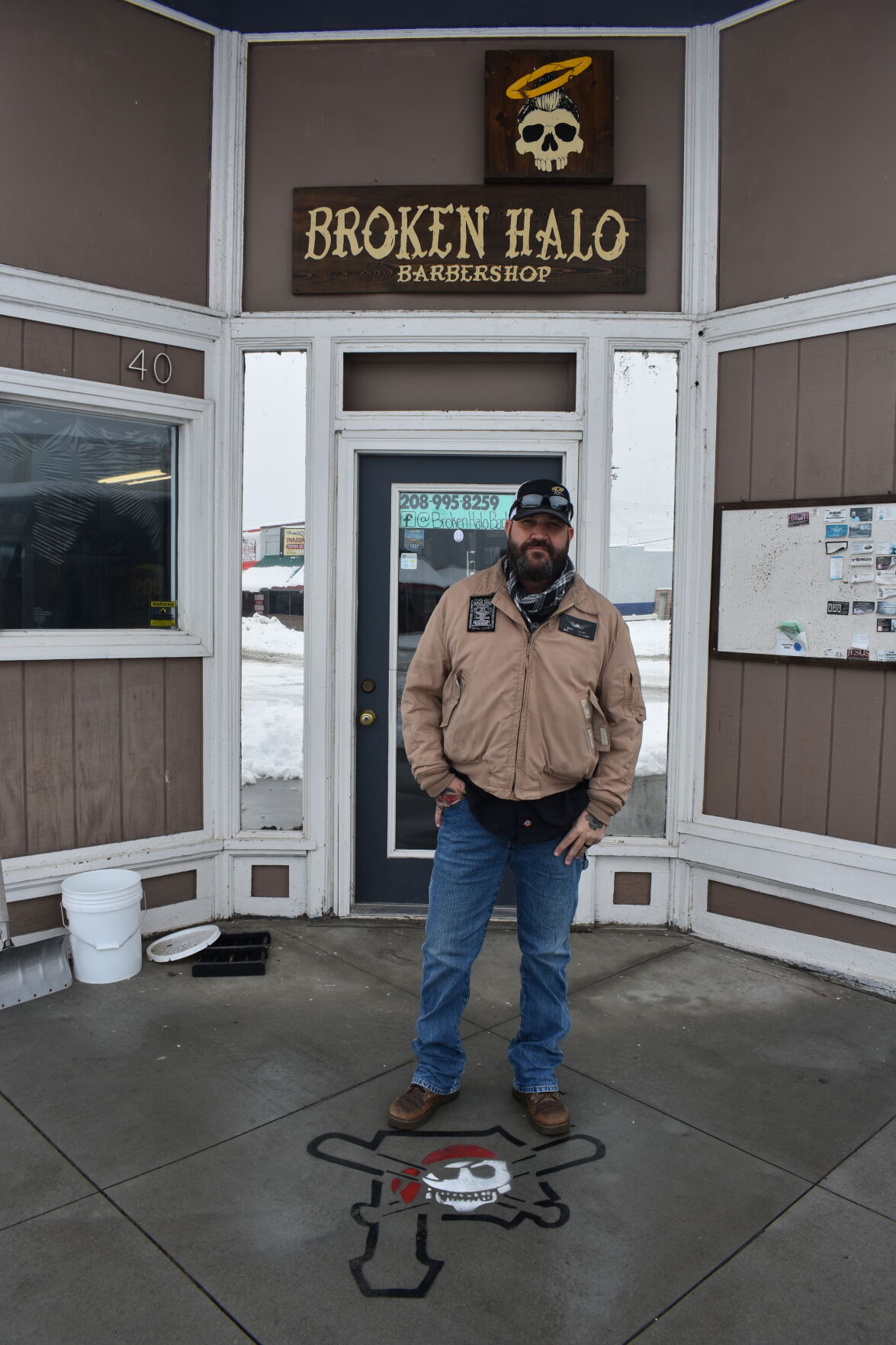 Kent Burns stands outside the Broken Halo Barber Shop in Payette. Burns explains that the name stems from his personal struggles and echoes his message to customers as they push through to the end of the COVID-19 pandemic. 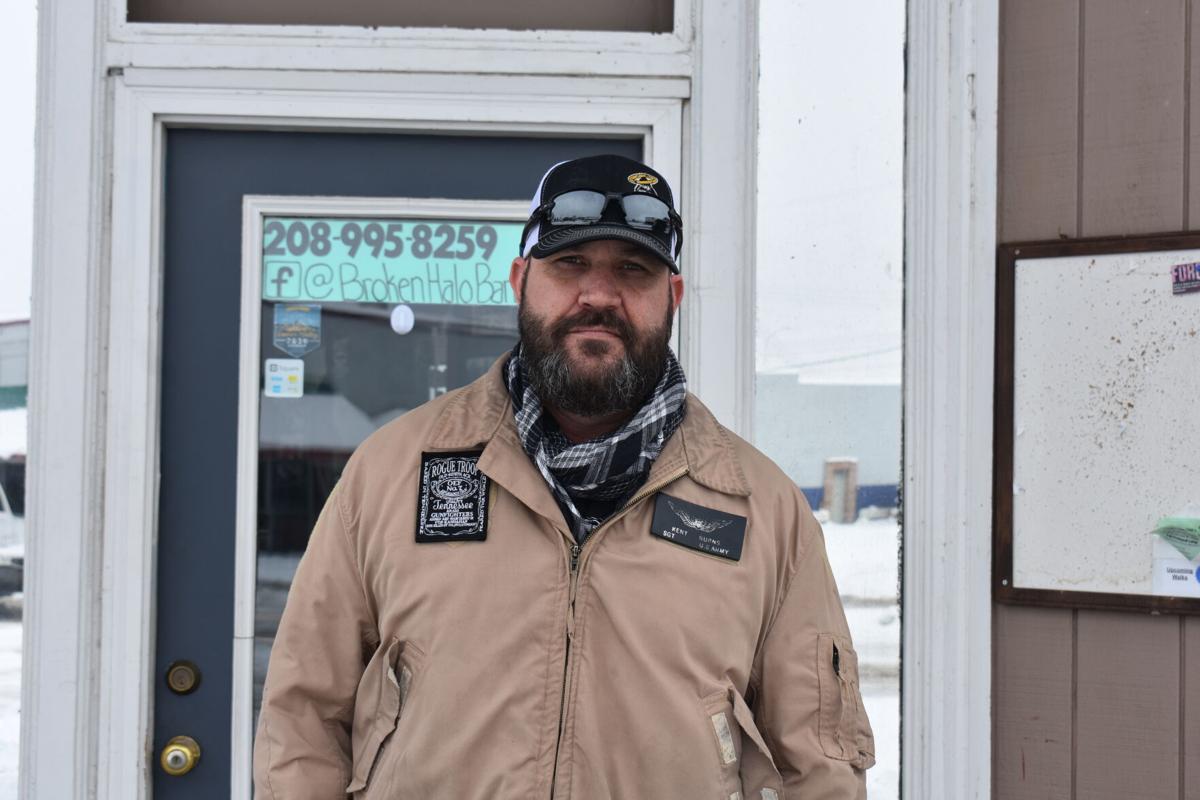 Kent Burns stands outside the Broken Halo Barber Shop in Payette. Burns explains that the name stems from his personal struggles and echoes his message to customers as they push through to the end of the COVID-19 pandemic.

PAYETTE - Just because your past or present isn’t the greatest to think about does not necessarily mean things will always be that way. That’s a lesson Kent Burns, owner of the Broken Halo Barber Shop in Payette, has spent his life learning and sharing with others.

In an interview on Feb. 15, Burns explained the meaning of the “Broken Halo” name.

“I was overseas a lot [during 21 years of service in the United States Army]; There are two of my children from a previous marriage that don’t really know me very well,” said Burns. “That’s all part of ‘broken halo,’ that’s about coming back. It’s about knowing that you have good intentions but sometimes bad things happen in life … It’s not about the fall, it’s about getting back up. That’s perseverance.”

Burns said perseverance has been his life’s theme, which he shares with others not only in conversation but through his tattoos.

Burns said he experienced depression and suicidal tendencies after retiring from the Army, which led him to hiding away from others for a year.

“It was bad! I basically locked myself into my room for a year and didn’t talk to anybody and didn’t do anything. But I scrolled … ’stay in the fight’ on my mirror at my placed and I looked at it every day.”

“It’s been tough; At the time COVID started and we went into quarantine, the business was going great,” said Burns. “We were on a really good trajectory, going straight up and then the government-mandated shutdown happened. It was supposed to be two weeks, it turned into two months.”

Despite being shutdown, Burns said he did not accept any unemployment benefits or assistance through the Small Business Administration’s Paycheck Protection Program.

“We just rode it out and by the grace of God my wife [Cassidy] works at home anyway. And I live just right [above] the barber shop.”

But Burns said he had made one mistake which almost derailed his reopening, specifically getting his license renewed on time as he had tried to temporarily defer a fee payment because of the stay home order.

“I had made a mistake and [the Idaho Department of Professional Licensing] came after during the pandemic and I didn’t want to play along very much and they took my license.”

He said that led to a conversation with several state senators and other government officials to plead his case before the department to get his license back after six weeks without it.

“I’m just here to work, I’m not here to mess with anybody, I just want to be able to pay my bills and pay my child support and everybody’s extremism is not very productive. I did 21 years in the United States Army, I’m not quiet, I never have been. I’m here to be heard when it comes to my family and my community. That’s pretty much how I persevere, I fight it.”

Burns added that he also served in the Idaho National Guard.

Burns noted that throughout the pandemic, he has kept in touch with customers through Facebook.

“People pretty much know my business all the time and that’s just the way I’ve ran this business,” he said. “I’ve been very public, very social media-oriented.”

Since being allowed to reopen under the “Stay Healthy” order which followed in May, Burns said business at the Broken halo has largely picked back up.

“It’s been fantastic, everybody has responded very well. My clients are just the best and I enjoy what I do.”

Burns said he considers his shop a “sanctuary” from his previous life.

“I think people understand that it’s got a vibe; It’s a happening place, it’s just a fun, cool place. I built that for me specifically, so I can have some place to work for the rest of my life. I just dig this place.”

Burns said his clients respond similarly to his shop’s vibe.

“Everybody’s my guest here [at the] Broken Halo … I will say that I’m not for everybody, though; I’m kind of outspoken and sometimes people don’t agree with what I have to say. I don’t try to bring politics into my daily life, but it sometimes happens,” he admitted. “I have a very big social media following and sometimes I say things on Facebook that … some people don’t like.”

However, he said that the overwhelming majority of his followers do agree with his views most of the time.

Burns said what he likes the most about living and working in Payette is its communal feel.

“I love this town. This is a fantastic town, I love this Main Street. This is kind of a lifestyle for me, I love it here and [so does] my wife … We just love it.”

While Burns doubts every aspect of life will return to pre-COVID-19 normal, he said he believes we can make what comes our way post-pandemic feel normal in our own way.

“For my customers that are struggling and my guests that are struggling, you’ve just gotta fight it out. You’ve gotta fight it out, you’ve gotta persevere. You’ve got to understand that things are different and you’ve got to adapt. That’s the military way of life right there is, things get difficult and you’ve got to adapt to that difficult situation… That’s what we've been doing for the last year as a community, as a nation, as a globe, that’s what we’re doing. We’re adjusting, we’re trying to adapt.”

Still, Burns notes that the world’s landscape is sure to look different after the pandemic passes.

“There’s a divide in this country right now … I just can’t explain it. We’re here to try and get through it. Stay living. Stay in the fight.”