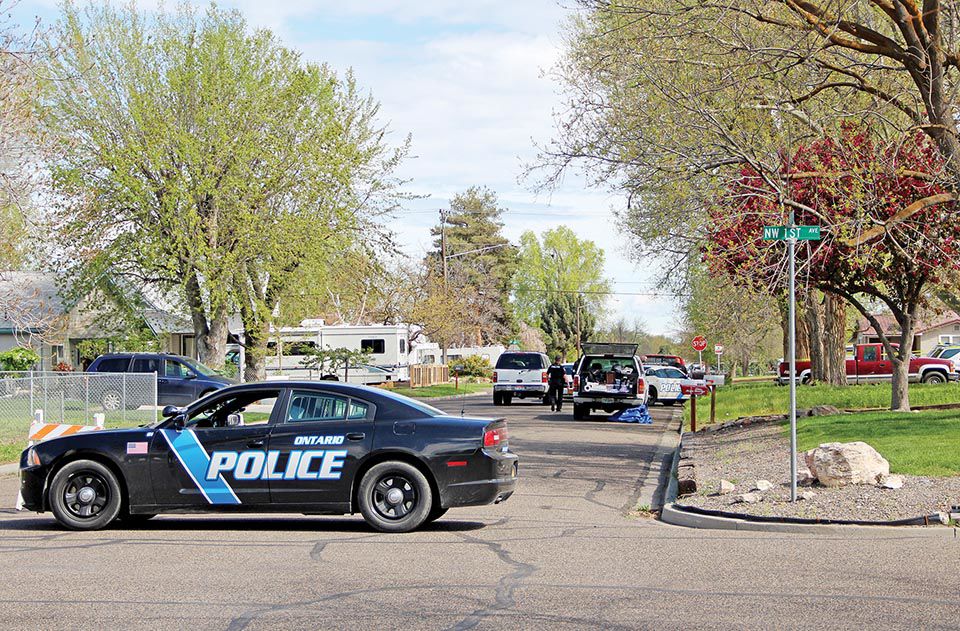 The block of Northwest Sixth Street between Second and Third Avenue was blocked off Tuesday morning as multiple law enforcement agencies investigated a fatal shooting.

Nicholas Tucker, 20, formerly of Fruitland, and Starr Bales, formerly of Vale, are currently being held without bail in the Malheur County Jail. Both face charges of murder and criminal conspiracy.

Arraignment for Tucker and Bales is slated for 1 p.m. today.

There is no bail because both face “Measure 11 charges for which a Judge must set the bail,” reads information received from the jail about their booking charges.

In Oregon, Measure 11 crimes are certain crimes against persons that carry mandatory minimum prison sentences, due to a citizens’ initiative passed in 1994.

The shooting was reported early Tuesday morning when a caller reported shots fired at 12:49 a.m. in the 100 block of Northwest Sixth Street in Ontario, according to a news release from Malheur County District Attorney Dave Goldthorpe.

When officers arrived, they confirmed a fatal shooting, said Ontario Police Lt. Jason Cooper, who is acting as the interim police chief.

The victim, Raymond Kelly, 21, of Ontario, was found inside the residence.

“The caller thought the wound may have been self-inflicted, but could not locate a weapon near the victim,” according to the release.

Both Ontario Police and EMTs arrived within minutes of the call.

Initial observations at the scene showed evidence that the shot came from outside the bedroom window, and a homicide investigation proceeded from that point, states the release.

Witnesses and neighbors were interviewed and search warrants were obtained in order for the Ontario State Police Crime Lab to process evidence.

During the course of the investigation, which is still active, police “developed some leads” that led them to the potential suspects, Cooper said.

Tucker and Bales are set to be arraigned today in Malheur County Circuit Court.

Cooper called the cooperation among agencies “great working partnerships,” adding that the agencies rely heavily on each other to work together on problems.

“They are hardworking, dedicated professionals,” he said. “We appreciate the working relationship we have with them.”

The interim police chief pointed out that law enforcement officials, in a little more than 12 hours, went from getting a report of shots fired to getting two in custody.

The fact that he was shot dead isn't alleged, only the suspects are alleged to have committed the crime.

yesterday I had a hunch and looked for Starr on Facebook. There she was with blonde hair. One of our McDonalds needs a new crew member...and as I've learned from many old black and white movies a guy should never listen to an angry chick who wants him to kill somebody over it...think about it, kids and don't waste your lives over garbage. And drugs/gangs make you stupid as well. Leadership starts with you, being a flunkie is failure. Regardless of of what our victim Mr. Kelly was into dying was not worth it nor was killing him. I guess that if you are doing illegal stuff though...telling the cops isn't a 'good' idea? STUPID STUPID DUMB.

I'm going to guess, the female was the plotter and had some kind of problem/grudge with the victim. It's possible that she worked in a local fast food restaurant as well.

And you should know better than to listen to the crazy thought of a wronged/angry woman...it's only the plot of so many black and white movies.

In case you are wondering, I took the news report, looked at Facebook and Google and found news reports from KBOI 2 and KVAL 13 in Eugene and I found one match to a girl of about that age...it was not too hard.

Starr? Is this a girl? So does equality now mean that you need to include a chick to commit gang violence? Hmmmm.... [batman]

Okay, so now we get to speculate the reasoning as to why...for about a day. Youth can be so stupid.