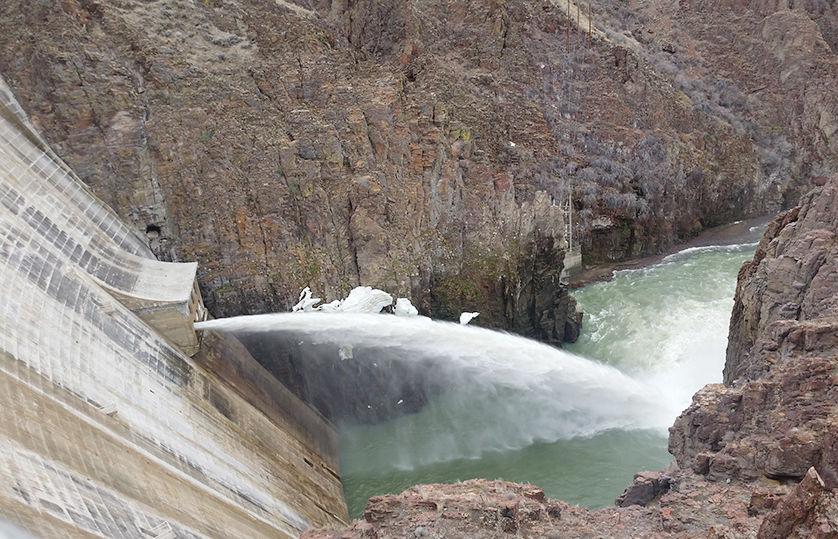 Water shoots out the front of Owyhee Dam into the river below in this photo taken in March 2017 during a flyover of the Owyhee Basin. 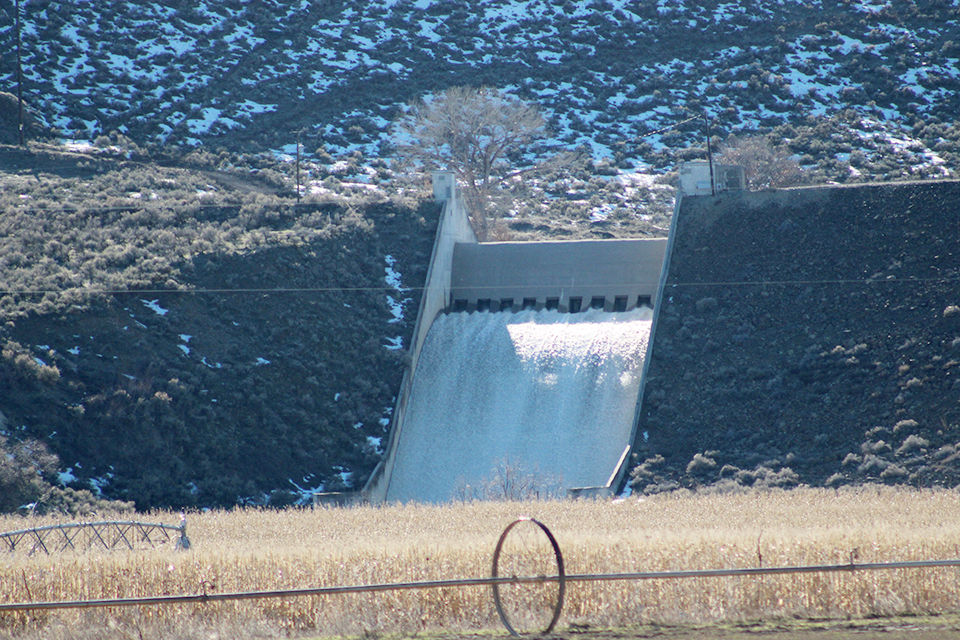 Water shoots out the front of Owyhee Dam into the river below in this photo taken in March 2017 during a flyover of the Owyhee Basin.

Irrigation changed the Malheur valley and areas of Idaho. Without it, most agriculture development would have remained close to the rivers.

Many of the irrigation storage reservoirs were developed by the Bureau of Reclamation, at one time called the Reclamation Service.

According to a history of the Owyhee Project, prepared by the Bureau, surveys of possible irrigable lands under the project and reservoir locations were performed in 1903 and 1905. In the 1925, a report was issued that recommended the Owyhee Project be developed, and was approved by the interior secretary and president in 1926.

Construction of Owyhee Dam, which started in 1928 and completed in 1932, was a prototype for Hoover Dam.

The basin, according to the Bureau, includes 11,160 square miles of area in Oregon, Idaho and Nevada, and is larger than the Weiser, Payette and Boise river basins combined.

Water for irrigation is either drawn from Owyhee Reservoir from where is it is stored, or pumped from the Snake River. From the reservoir, irrigation water travels through a 3.5 mile-long tunnel to Tunnel Canyon. There, the water is split between North Main and South Main canals.

The North canal carries water to irrigate land from the Mitchell Butte area, west to the Vale area, and north to the Oregon Slope, ending at the Snake River, for a distance of about 61.5 miles, and the Owyhee Project has 350 miles of distribution.

Prior to the completion of the Owyhee Dam and Reservoir, the Owyhee Ditch Company was formed by people living on the lower Owyhee in 1880s, according to information printed by the Malheur Country Historical Society. They built a 4-foot-high diversion dam made of rocks, willow branches and sage brush. In the 1890s, the ditch was extended to the Arcadia area, north of Nyssa and then onto the Ontario area.

According to a history posted by the Bureau of Reclamation land now part of the Vale Project was irrigated from about 1881 by settlers in the area, who diverted water from the Malheur River into distribution systems by small ditch companies.

The Warm Springs Dam came first. It was built with private funds by the Warmsprings Irrigation District, and completed in about 1918 and 1919, providing irrigation water to land along the lower Malheur River toward the Snake River.

However, problems developed as drainage for fields were not adequate, causing a rise in the water table and reducing the amount of land that could be farmed.

The bureau was asked to study the possibility of a irrigation project in the area in 1925, and it was authorized in 1926 to help solve the situation.

In return for help solve the drainage problem, the Warm Springs district needed to be included in the larger Vale Project. The Bureau of Reclamation bought one half of the storage in Warm Springs Reservoir for irrigators in the Vale Oregon Irrigation District, which was approved for funding for digging of canals and building a diversion dam to take water from the Malheur River, according to a History of Malheur County, published by the Malheur Country Historical Society. It also was able to buy one-half of Warm Springs Reservoir storage.

Beulah Reservoir was added to the system in 1935, and Bully Creek Reservoir, came on line in 1961. This system covers Harper, Vale, Willowcreek and Jamieson areas, according the district website.

• The dam rises 417 feet from its foundation in the river and 530 feet above the low point of the excavated zone.

• Total capacity of the reservoir is 1.12 million acre feet.

Construction of Owyhee Dam, which started in 1928 and completed in 1932, was a prototype for Hoover Dam.