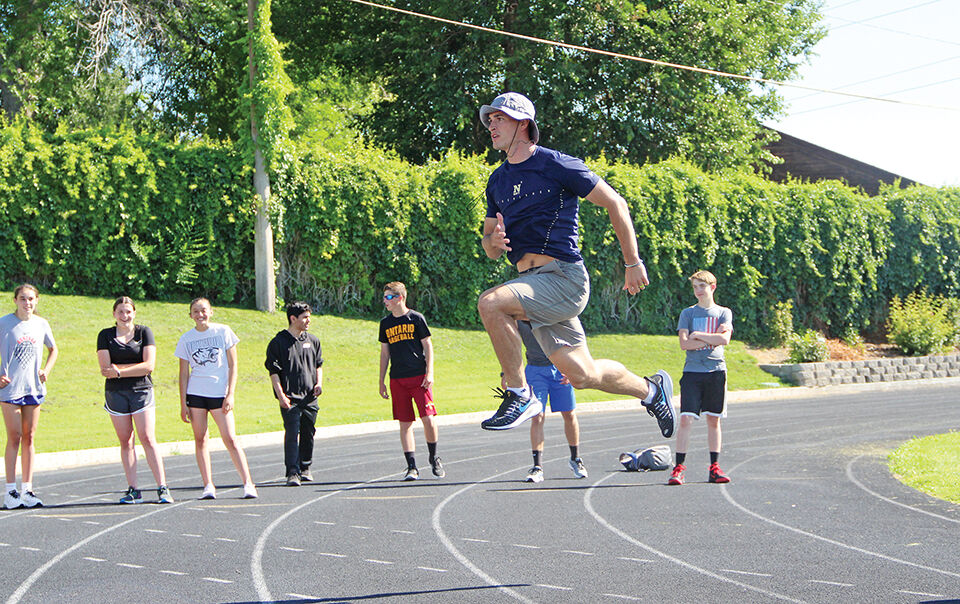 Ontario High School alumnus Joe Delgado displays his jumping ability for some of the athletes in attendance at a speed clinic in Ontario on Thursday morning. 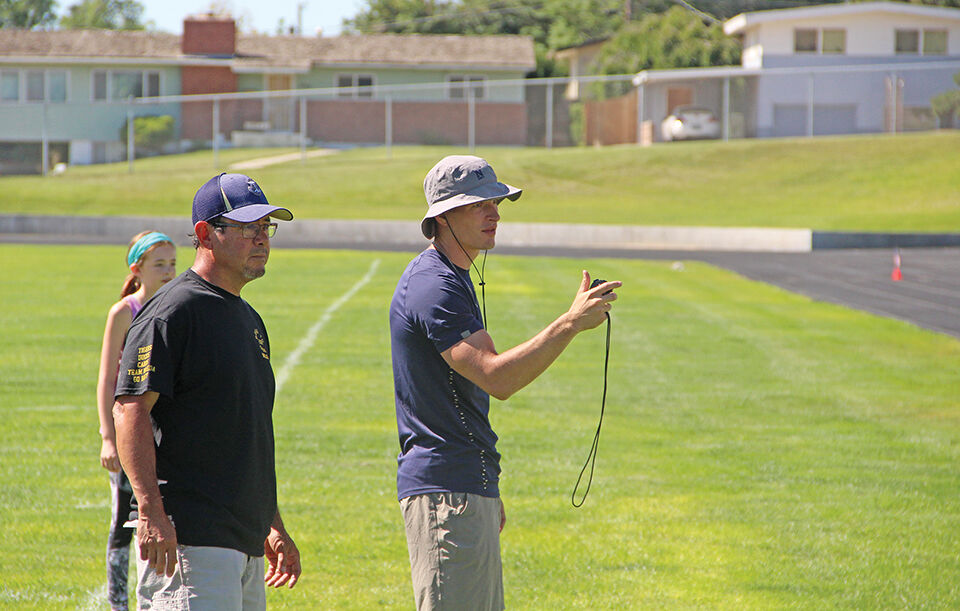 Delgado times athletes’ sprints while standing next to his father, Jose. 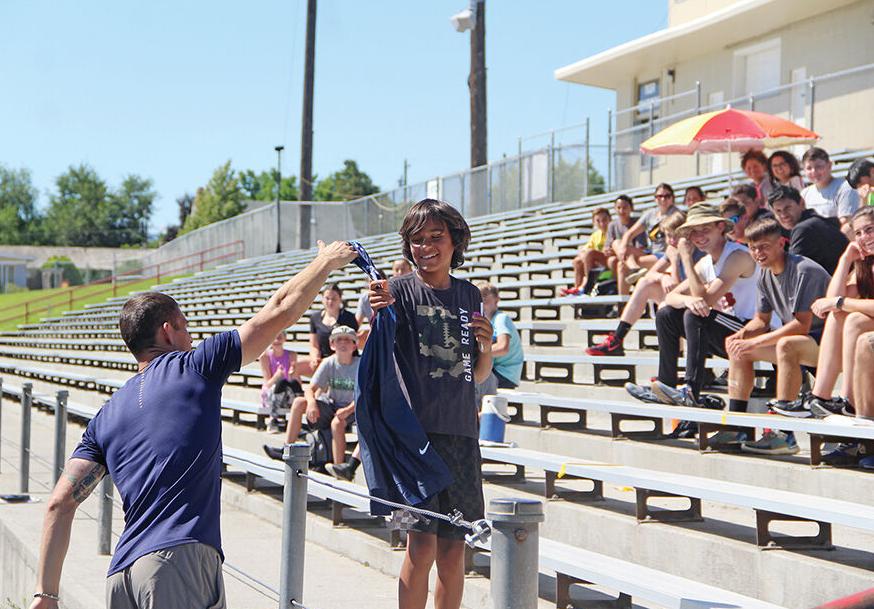 Delgado hands an athlete a spandex outfit that, according to Lee Webb, was once worn by current NFL running back Todd Gurley. 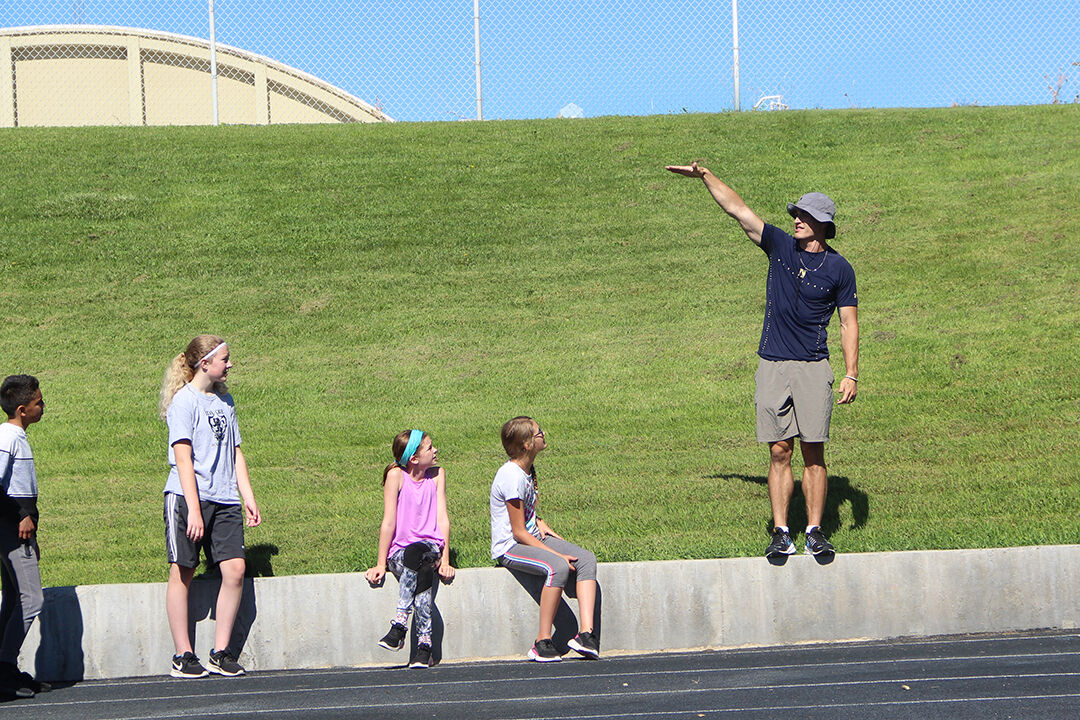 Delgado, right, shows athletes at his speed clinic a simple explosiveness drill, which included jumping off of an elevated serface. 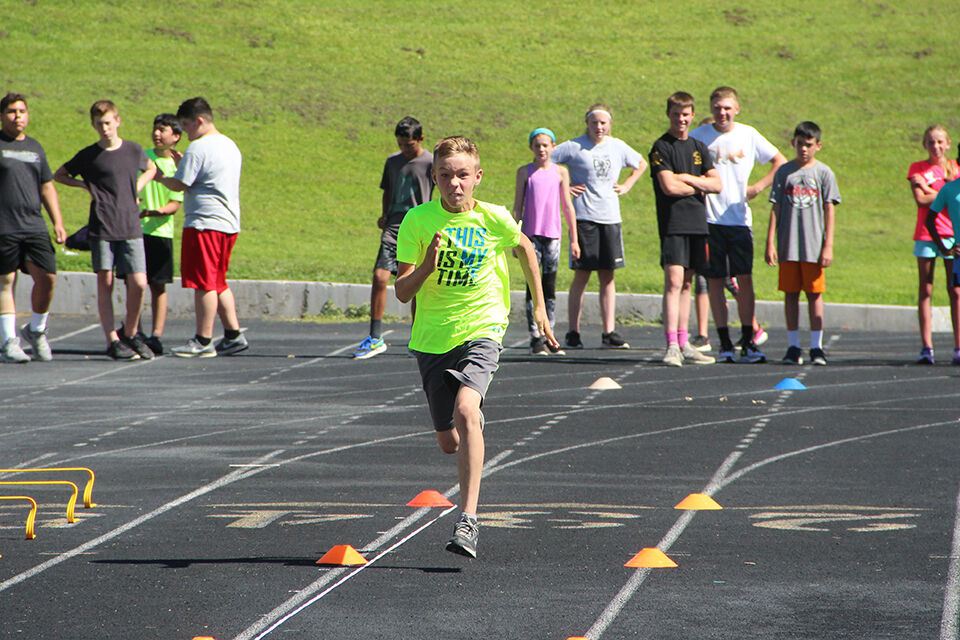 At the end of the speed clinic, Delgado timed every athlete’s sprint time.

Ontario High School alumnus Joe Delgado displays his jumping ability for some of the athletes in attendance at a speed clinic in Ontario on Thursday morning.

Delgado times athletes’ sprints while standing next to his father, Jose.

Delgado hands an athlete a spandex outfit that, according to Lee Webb, was once worn by current NFL running back Todd Gurley.

Delgado, right, shows athletes at his speed clinic a simple explosiveness drill, which included jumping off of an elevated serface.

At the end of the speed clinic, Delgado timed every athlete’s sprint time.

ONTARIO — Some of Ontario’s future track stars got some help from one of Ontario’s greatest athletes, as Joe Delgado was in town on Thursday morning to host a speed clinic at Ontario High School.

The event was hosted through the Ontario Recreation Department with Delgado working with local children up to eighth grade. Due to NCAA rules, Delgado (who is an assistant coach at the U.S. Naval Academy) was unable to work directly with the high school students. The high school athletes worked out with long-time California coach Lee Webb.

Delgado graduated from Ontario High School in 2013 and attended the University of Oregon for four years. His junior year, Delgado took second at the Pac-12 Multi-Event Championships and 12th at the NCAA Tournament. For his senior year, Delgado transferred to the University of Louisville and took third at the ACC Tournament and finished fourth at the NCAA Tournament (setting the school record for outdoor points in the decathlon) to qualify as an All-American.

In September 2018, Delgado was hired as an assistant track and field coach at the United States Naval Academy in Annapolis, Maryland. He was planning on competing in the U.S. Olympic Trials in 2020, which would have been on June 20 and 21 (before being suspended due to the pandemic caused by the spread of the novel coronavirus COVID-19).

While Delgado has been back in town from time to time, this was just the second free speed clinic he’s hosted in Ontario. But he’s hoping to make this an annual event.

“I get a lot of support from Ontario. Tiger pride runs deep,” Delgado said. “And I feel like anytime I come back and I want to offer something to give back to the community, they’re always willing to have kids sign up. The more kids the better, because the more kids that I can get exposed to sports and being active and being fast then Ontario sports can dominate. That’s the biggest thing. I just want Ontario sports to be on top, every year.”

And while it’s fun to be able to coach the kids of Ontario, Delgado said it’s especially sweet for him to be able to do it with his former coach, Paul Bentz, and his father, Jose, who coached Delgado from when he was just getting started in Ontario athletics as a youth.

Delgado won a state championship in the hurdles under Bentz.

“To be in the position where I am now at the Naval Academy, and coming back here and working alongside the guys that coached me, it was just awesome,” Delgado said. “Being able to see all these faces that were my mentors, my coaches growing up and now I get to work alongside them. It’s great. It’s awesome.”

With the Olympic Trials now postponed to 2021, Delgado said he is taking the summer to just focus on his speed.

“Working on some things that I need to improve on coming into the trials for next year,” Delgado said. “I’m hoping to go in and turn some heads and be the underdog and get on that top-three podium and make the team.”

And in training for the upcoming Trials, Delgado has one of the best training partners in the country. While at the Naval Academy, Delgado is working for Jaime Cook, who was Delgado’s coach at Oregon. And just recently, former Oregon hurdler and football player Devon Allen has started working out at the Naval Academy.

Allen was a multiple time All-American at Oregon, and two-time national champion. He competed in the 110-meter hurdles in the 2016 Rio de Janeiro Olympics, finishing fifth.

Delgado said him and Allen are able to work on their speed together.

“Me and Devon, we’ll train and we’ll spring on certain days together,” Delgado said. “It’s great having that Olympic-caliber athlete at the Academy.”

One thing that Delgado had been dealing with in his college career, especially during his time at Louisville, was soreness in his arm. Right after the NCAA Championships his redshirt senior year, 2018, Delgado underwent Tommy John surgery. When looking back on the surgery, Delgado beamed.

“My arm, now, is one hundred percent better,” Delgado said. “I haven’t tested it fully to the max yet, but I know that if I where to wham it, I could definitely hammer a good one. A javelin. I’m ready to go. I’m the strongest I’ve ever been, right now and I know that if I competed I’d definitely hit that A standard.”