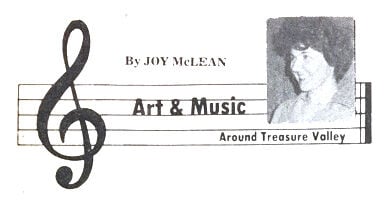 A logo from a weekly column titled Art & Music, which ran in the 1970s, featured a photo of Joyce “Joy” McLean from that era. This photo came from the newspapers November 1978 archive. 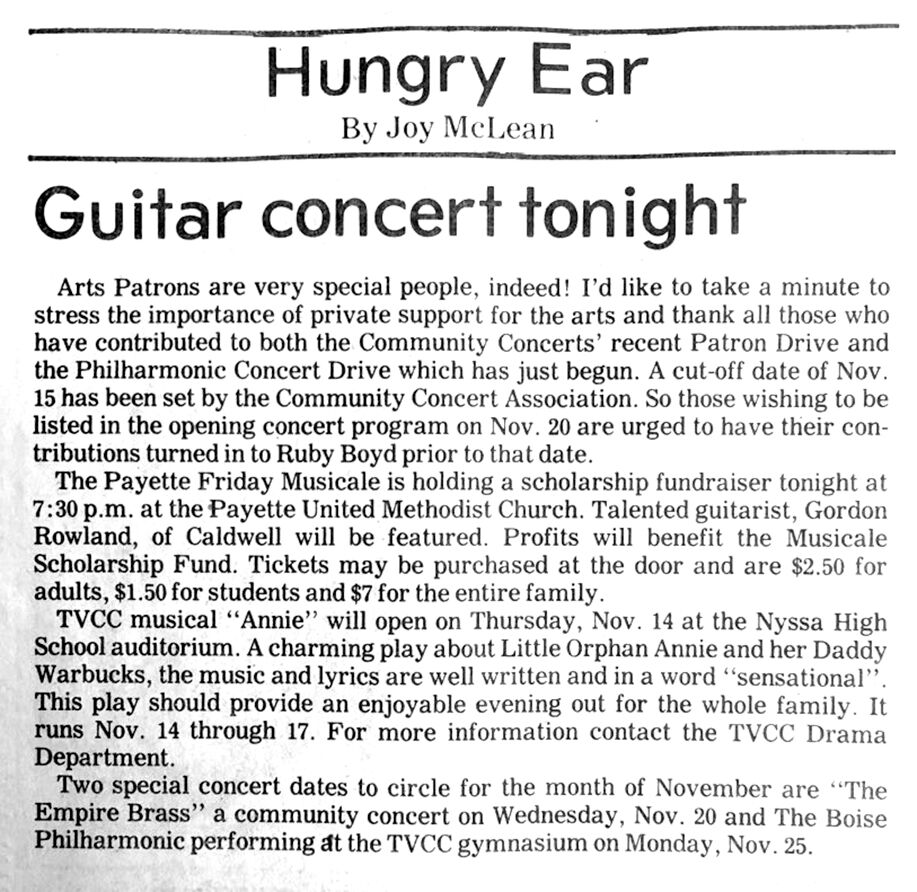 This photo from November 1985 archives shows "The Hungry Ear" column, which was a regular feature by Joy McLean, who would talk about upcoming music events and review ones that she had attended. 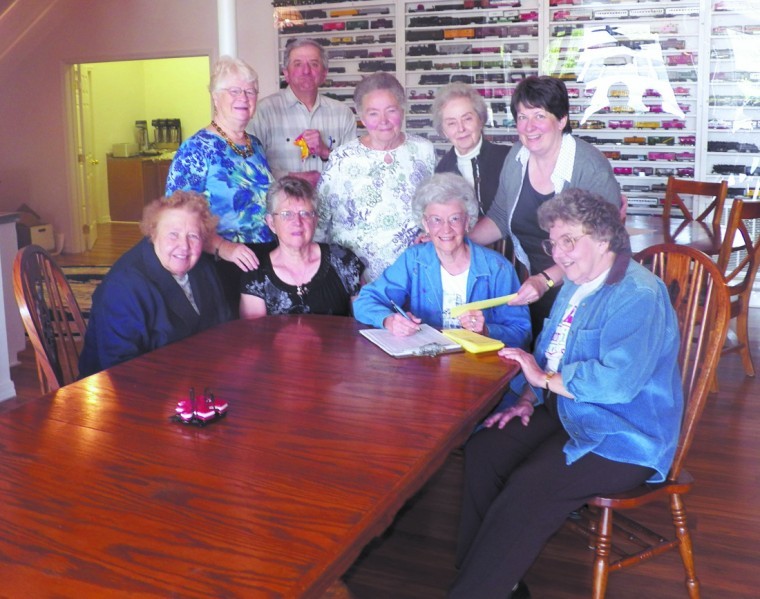 A logo from a weekly column titled Art & Music, which ran in the 1970s, featured a photo of Joyce “Joy” McLean from that era. This photo came from the newspapers November 1978 archive.

This photo from November 1985 archives shows "The Hungry Ear" column, which was a regular feature by Joy McLean, who would talk about upcoming music events and review ones that she had attended.

The Western Treasure Valley is mourning the loss of a local woman who was an ardent musician and lover of music, who used to write columns regarding music for years in the Argus Observer.

Joyce McLean, who was known by many as “Joy,” died at the age of 85 on Jan. 31, but her imprint on the music scene in the Western Treasure Valley will carry on.

McLean arrived in the area from Ohio in 1968 with her husband, Fran, who had moved his family after accepting a job to be publisher of the newspaper — a job he held until health reasons forced him to retire in 1997. During the course of his nearly three-decade career, Joy McLean’s writings began to appear in the Argus. In the 1970s, she was writing a weekly column titled Art & Music, which gave a rundown of all events related to those topics that were happening around the valley. Sometime in the 1980s, that column morphed into “The Hungry Ear,” in which she would talk about upcoming events, as well as review music.

Just a few years after arriving to Ontario, the McLeans started Help Them To Hope, a local holiday charity drive, which eventually included an annual fundraising concert, too.

Wanda Lehmkuhl, a local musician, who worked on those concerts behind the scenes and often performed in them, too, says Joy, was involved in a lot of local music groups, including Payette Friday Musicale. For this group, Joy was a historian and put together scrapbooks for all the different meetings since she had been appointed to the position about 15 to 18 years ago, according to Lehmkuhl.

When recalling the things she remembered about Joy, Lehmkuhl focused on her name.

“The things I remember center around her name, because everywhere she went she seemed to be a joy — she was always smiling, always graceful and always reached out to others.”

Additionally Lehmkuhl recalled reading “The Hungry Ear” column in the Argus for “many, many years,” in which Joy would write about all kinds of music, she said.

“She went to every kind of concert there was — school or whatever — and then she would write about the music she heard and how it affected her and how others were enjoying it, too,” Lehmkuhl said, recalling that the music reviews by Joy continued until well after Fran had retired.

According to an obituary scheduled to run in Sunday’s Argus Observer, Joy graduated in 1957 with a degree in music education from Bowling Green University in Ohio, where she participated in marching band, something she had also done in high school. Her instruments of choice were French horn and piano.

Some of the concerts that Joy reviewed included those put on by the Community Concerts of Treasure Valley organization, according to an emailed comment from John and Sue Grief.

“Joy was a willing worker in the Community Concerts organization. She loved music, and performed as a singer, pianist, and French horn player. She was a faithful worker for Community Concerts holding several positions in the organization,” reads and email from the Griefs. “Her cheerful countenance and enthusiasm will be missed.”

Joy McLean review from Dec. 6, 2012: Great turnout for Help Them to Hope concert

{child_flags:featured}Joy McLean review from Dec. 6, 2012: Great turnout for Help Them to Ho…

The things I remember center around her name, because everywhere she went she seemed to be a joy.