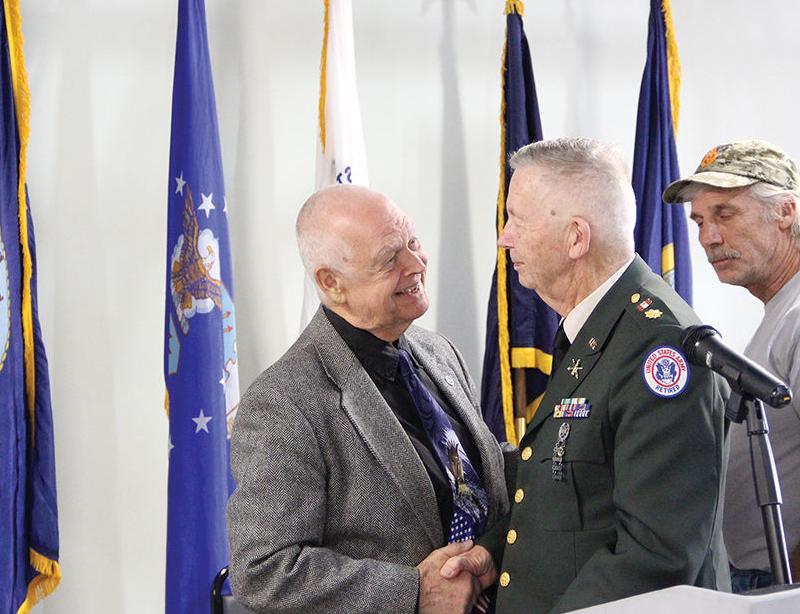 ONTARIO — “I am so grateful that God can use me in this way.”

Those were the last words spoken by Gerald “Jerry” Haines at Wednesday afternoon’s award ceremony as upwards of 100 people met at the Veterans Advocates of Ore-Ida building to honor the local veteran, who was receiving the National Hospice and Palliative Care Organization Volunteer of the Year award for his volunteer work with Heart ’n Home Hospice.

And as multiple members of Heart ’n Home Hospice pointed out, those words from Haines reflect the type of man that he is. Todd Stice, co-owner of Heart ’n Home, said Haines has done hundreds of pinning ceremonies over the past five years and his commitment to serving others, following a 25-year career in the U.S. Army National Guard, can be a lesson for everyone.

“Being around Jerry is a great opportunity for all of us,” Stice said. “We can all take lessons that Jerry has had in his life and learn from that.”

Stice said that Haines always comes in uniform to the pinning ceremonies and “with the intention to make a deep connection with a dying veteran.”

“The patients are moved by his words,” Stice said. “Jerry has a way of connecting with the patients and their families. Sometimes he’ll sit with a patient when they have nobody else. He sets the standards high for other volunteers.”

Care navigator Sharla Phelps said Haines’ ability to connect with others is one of the most valuable assets to Heart ’n Home Hospice.

“He is ready for the mission we are taking on that day,” Phelps said. “He is aware of the magnitude that pinning will mean for a veteran. That connection is vital for care with veterans.”

And while a big part of Haines’ work has been in his ability to conduct the pinning ceremonies, volunteer coordinator Gwen Bennion said Haines’ reliability is just as important.

When it was Haines’ time to speak, he reiterated that he is not doing anything extraordinary.

“The first, and most important thing, I feel I am accepting these awards for all of the volunteers out there,” Haines said. “I did two radio interviews. And on both calls, they asked me, ‘Why do you volunteer?’ Well, I got involved. It’s simple. We all do things one step at a time. One day at a time. I believe God is a moderator of every good thing that happens. He gave me a nudge. I was volunteering here at the Veteran Advocates. Well, one day someone from Heart ’n Home Hospice came in and asked if there were any pinning volunteers. It was all very simple. I’m a simple guy. And I can do simple things.”

On top of being given the Volunteer of the Year distinction, Haines was also given honors from other entities on Wednesday. Idaho National Guard Major General Michael Garshak awarded Haines with a Certificate of Appreciation.

Also in attendance was an official member of the office of Idaho Sen. Mike Crapo, R-Idaho Falls, who gave Haines the 2019 Spirit of Freedom: Idaho Veterans Service Award. The Spirit of Freedom Award was started in 2002 by Crapo as a way to recognize and acknowledge the contributions of Idaho’s veterans as well as volunteers who support these veterans.

Haines was given both the certificate and a flag that has been flown over the U.S. Capitol building.

He is one of 28 Idahoan veterans to receive the Spirit of Freedom Award.

Haines was nominated for the prestigious award by Veteran Advocates of Ore-Ida President Ron Verini.

“Jerry is one of those special people,” he said.