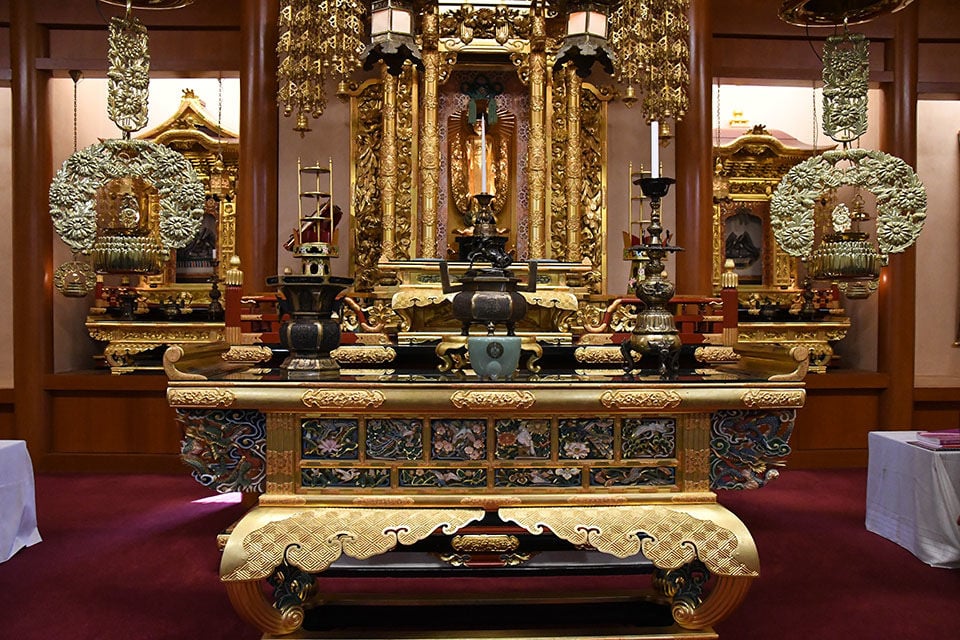 The ornateness of the shrine at the Idaho-Oregon Buddhist Temple follows the tradition seen in Japan, but differs from that of many Buddhist temples in the United States. 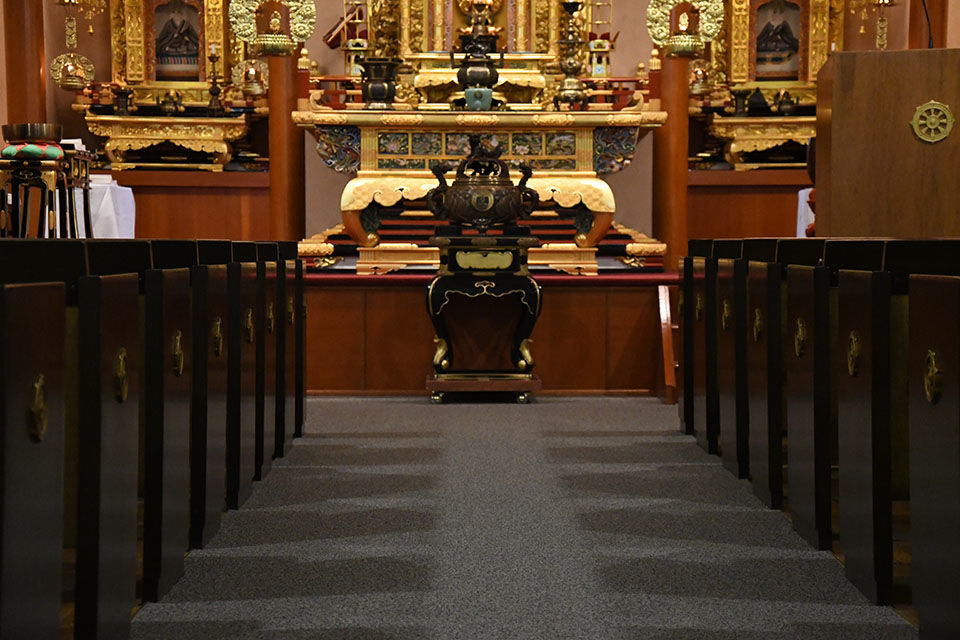 Pews are an element taken from Christian churches; traditional Buddhist temples typically only have the floor.

The ornateness of the shrine at the Idaho-Oregon Buddhist Temple follows the tradition seen in Japan, but differs from that of many Buddhist temples in the United States.

Pews are an element taken from Christian churches; traditional Buddhist temples typically only have the floor.

Before local Buddhists helped build a temporary building for temple services and dedicated the space on April 13, 1947, the Buddhism religion had already been going strong in the Western Treasure Valley.

This is because of an influx of Japanese-Americans that came to the area during World War II, who came to work on farmland while laborers part of Treasure Valley farm families had gone into military service or performing war-related jobs.

This was about the time Japanese-Americans, in May of 1942, who resided on the Pacific Coast, from Washington down to California, were sent by way of railcar to regional detention camps during World War II.

Eventually, many of these families would end up in Ontario and surrounding communities. Called the “Issei,” or first generation Japanese-Americans, many put down roots in the area, including that of their Buddhist roots, until, at the time, Ontario became a center of Japanese culture.

The Issei would eventually construct a community hall in the late 1930s in the area, according to the webpage of the Idaho-Oregon Buddhist Temple, not only so that young people could have a place to participate in athletics and social activities, but also to provide a space for Buddhist congregation.

Membership within the Idaho-Oregon Buddhist Temple would eventually grow until temple leadership felt the need to expand the space beyond the current offerings at the time.

“There wouldn’t have been enough people to form a temple otherwise,” said Mike Iseri, current co-president of the temple.

The decision was made to move the temple closer to the downtown core of Ontario, on the east side, where a majority of Japanese businesses and homes had been located. Groundbreaking ceremonies would be held in January of 1952 for the new building, at its current location, with dedication taking place in February of 1959.

It should be noted that the Idaho-Oregon Buddhist Temple had already been added to the list of the Association of Buddhist Churches of America, which it is still a member of today, Iseri confirmed.

The association serves as the U.S. branch of the Nishi Honganji subsect of Jōdo Shinshū Buddhism, which the Idaho-Oregon Buddhist Temple follows.

What is interesting of note, however, is the the fact that while there was a strong current of Buddhism in Ontario and the surrounding area in the 1940s, the Community United Methodist Church, mainly for Japanese-Christians was founded around the same time, Iseri said.

Many of these Japanese-Christians would have converted to Christianity, typically because of a spouse who was Christian, Iseri said, or simply “through assimilation to American culture,” he added.

Despite the Methodist Church and Buddhist Temple being located within the same city, Iseri said it wasn’t a problem for the local Buddhists.

“The Buddhist practice would be supportive of people’s decisions of faith,” Iseri said. “They don’t judge.”

However, inspirations from Christianity did make their way into the operation of the Idaho-Oregon Buddhist Temple. First was installation of pews into the main worship center. According to Akiko Rucker, who grew up in Japan as a Buddhist, before eventually moving to Vale in 1979 and Ontario in 2002, traditional Japanese Buddhist temples would have no benches, as worshippers would be required to sit on the floor.

“This is America, though,” she said.

Other differences not seen in Japan’s Buddhist temples include a weekly Sunday service, according to Rucker, and even during the Sunday service, songs in addition to the typical sutra chanting.

In Japan, Buddhist temples do not offer Sunday services, but do host special events several times per year.

However, of note is the ornateness of the actual shrine at the Idaho-Oregon Buddhist Temple; it’s a style that is seen in Japan, Rucker said, but not many American Buddhist temples follow that tradition.

The Nishi (Western) Honganji subsect of Jōdo Shinshū Buddhism, which the Idaho-Oregon Buddhist Temple follows, is considered largest of the Jōdo Shinshū branches, and when compared to its Eastern cousin, Higashi (East) Honganji, has had more institutional stability.

It should be noted that Rucker, who grew up in the southwestern part of Japan on the main island of Honshū, grew up with Higashi (East) Honganji instead of the Nishi (West) Honganji followed by the Idaho-Oregon Buddhist Temple.

Still, Rucker believes there isn’t much of a difference between the two.

Japanese Buddhist temples tend to be run and operated through families, Rucker said, and passed down as such.

In the United States, Buddhist Temples members of the Buddhist Churches of America are assigned a minister. Rev. Dennis Fujimoto was the resident minister until he left in August 2016. Now, the Idaho-Oregon Buddhist Temple has a supervising minister, Jerry Hirano, along with three minister assistants. Hirano is usually present only for special services, weddings and funerals, and travels to Ontario once a month, Iseri said.

• Buddhism is the fourth-largest religion in the world with 360 million followers.

• With an emphasis on meditation and mindfulness, Buddhism is often considered to be a form of psychology rather than a religion.

• Buddha was mainly portrayed as chubby because it was symbolic of happiness in the east. In reality, he practiced moderation in all things, fasted regularly, and spent most of his time walking hundreds of miles spreading the philosophy of enlightenment.

• Those who practice Buddhism view Buddha as a teacher, and not a god or avatar.