On the south side of the Masonic Lodge is “Patriots on Parade,” The mural, painted by Colleen Mitchell-Veyna depicts a Fourth of July Parade on Main Street in the early 1900s. 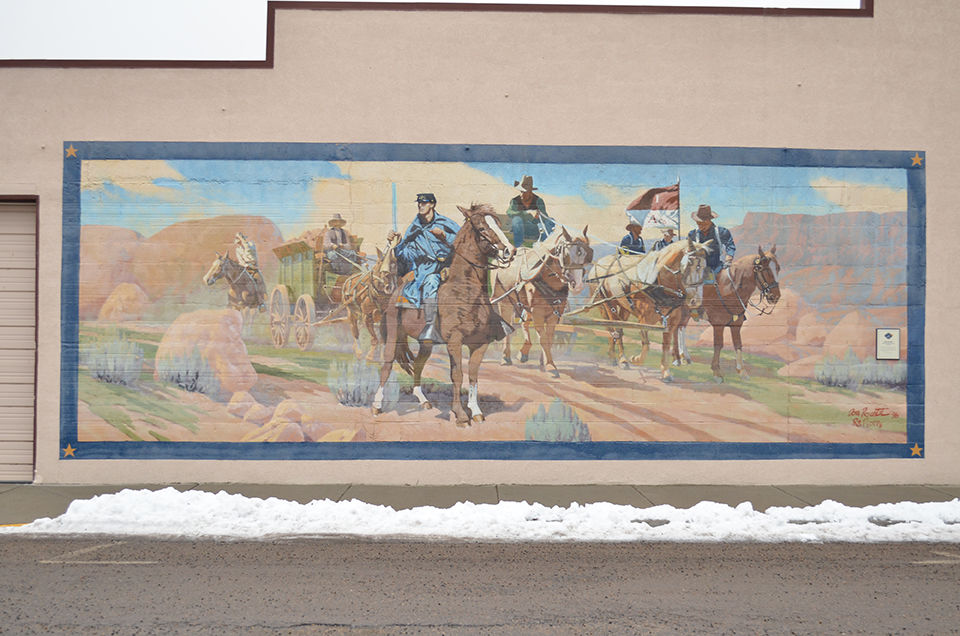 This mural is on a building across the street from the Vale Post Office. 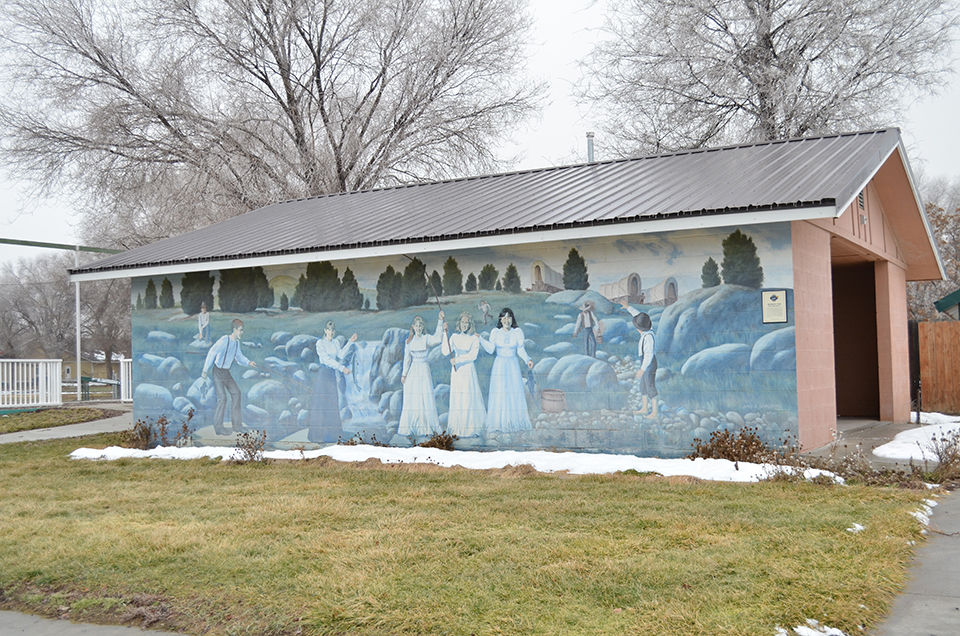 Another mural in Vale. 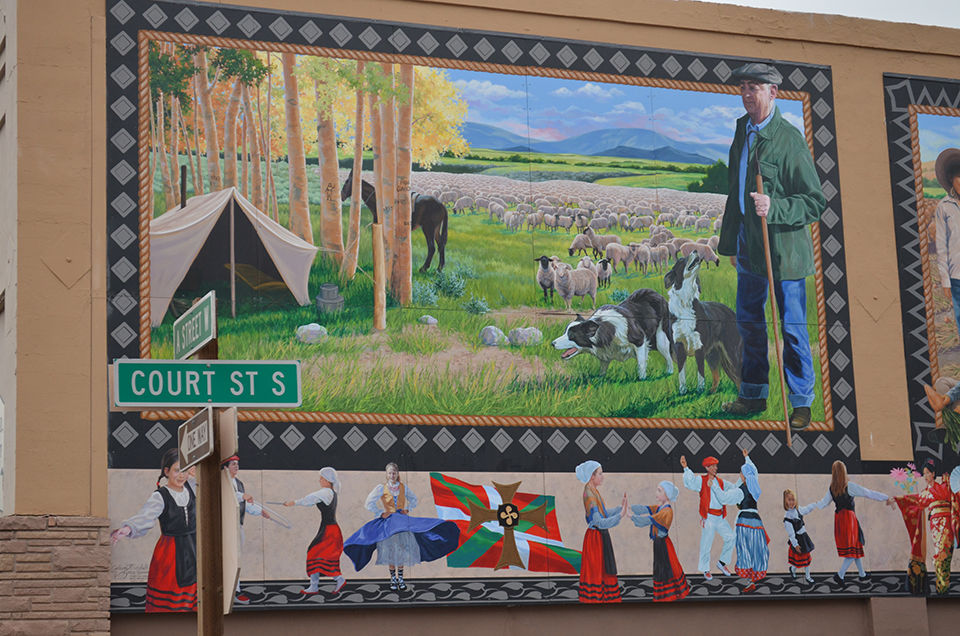 This mural depicts sheepherding by the local Basque. 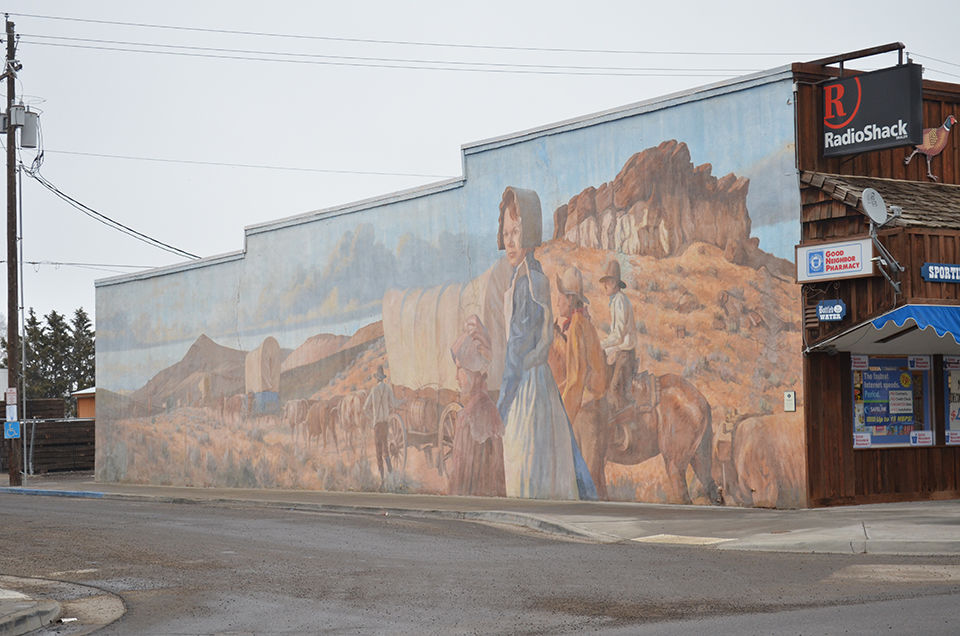 This mural, in Vale, depicts life on the Oregon Trail. 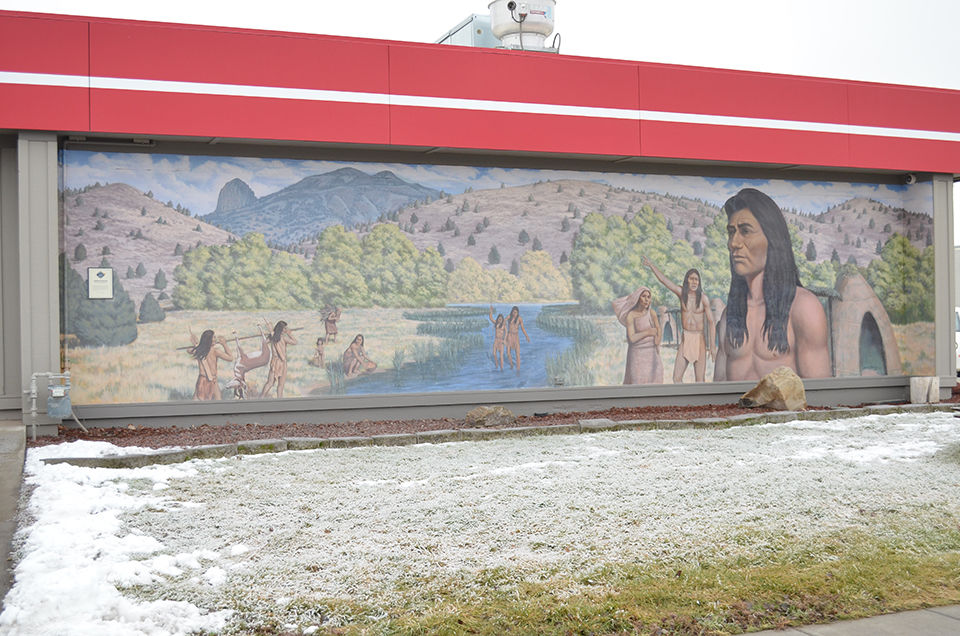 This mural depicts American Indians on the north side of the Senex gas station. 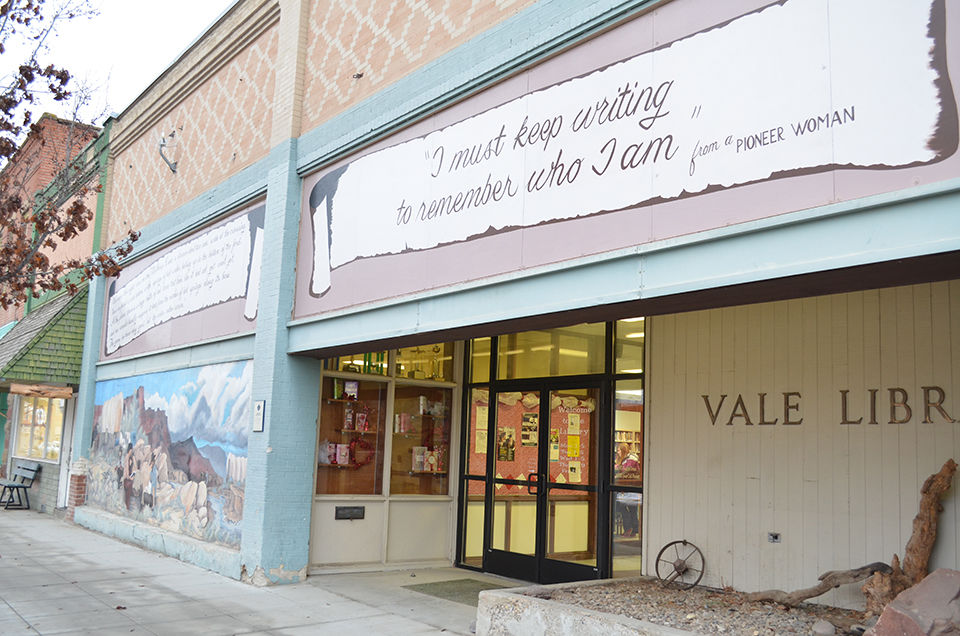 This mural depicts life on the Oregon Trail, shown next to the entrance of the Emma Humphrey Memorial Library. 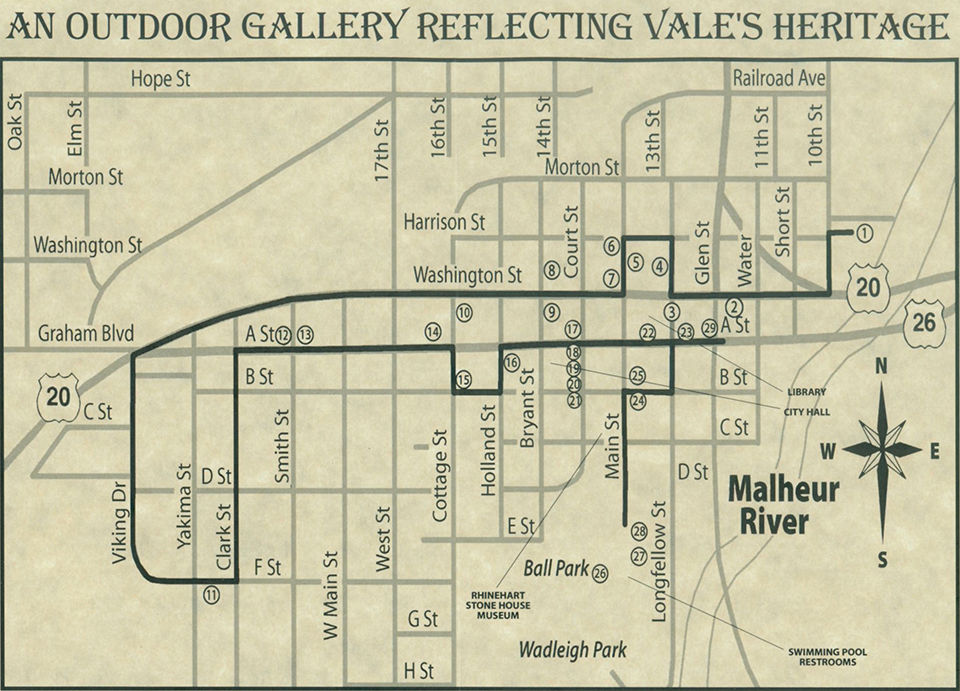 This outdoor gallery map is pictured on the mural brochure.

On the south side of the Masonic Lodge is “Patriots on Parade,” The mural, painted by Colleen Mitchell-Veyna depicts a Fourth of July Parade on Main Street in the early 1900s.

This mural is on a building across the street from the Vale Post Office.

Another mural in Vale.

This mural depicts sheepherding by the local Basque.

This mural, in Vale, depicts life on the Oregon Trail.

This mural depicts American Indians on the north side of the Senex gas station.

This mural depicts life on the Oregon Trail, shown next to the entrance of the Emma Humphrey Memorial Library.

This outdoor gallery map is pictured on the mural brochure.

No matter which way you drive through Vale, there are several unmissable sights that are hard not to notice: the murals adorning the buildings.

In total, there are 29 murals and four sculptures in Vale, each a snapshot of early life in the Western Treasure Valley.

The murals in Vale were started by the Vale Heritage Reflections Mural Society, which was formed in the fall of 1992. The group’s start lined up with the 150th anniversary of the Oregon Trail a year later.

The society was an economic development initiative, and started the murals to help increase tourism. They applied for a 501(c) status as a public nonprofit entity.

The idea for murals was born in 1992, when Gary and Rita McGraw visited Chemainus, British Columbia, where they saw a collection of murals.

The McGraws were the owners of Malheur Drug at the time, and used their building as the first site of the murals.

The first of the murals was “The New Arrivals,” which sits on the western wall of Malheur Drug. “The New Arrivals” was painted by Don Gray, an artist and Oregon Trail scholar out of Union. It shows pioneers leaving Keeney Pass and heading for Vale.

In 1994, “The Crossing” was added, showing immigrants crossing the Snake River near Old Fort Boise with wagons. “The Shortcut” was added that same year. It depicts

Stephen Meek leading a wagon train in their attempt to find a shortcut to the Willamette Valley.

The following year was a busy one for the Vale Mural Society. In 1995, the group added “The Trappers,” which shows men camped on the Malheur River trading furs with natives; “The Diggin’s,” depicting miners in the Mormon Basin; “Death on the Trail,” a painting of a family mourning the loss of a daughter northwest of Vale; “The Hot Springs,” in which people are enjoying a bath in a hot spring on the Malheur River; and “Journaling,” in which a mother reads to a child as a man writes in his journal.

In 1996 three more murals were added around town. “Vision Fulfilled” was painted by James Spurlock, whose mural illustrates what life was like for the early native inhabitants of the area. In “The Hunters,” two men return to their wagon after a hunt. “The Escort” was also added in 1996, depicting a silver shipment traveling a military road.

In 1997, “First Set of Shoes” was added, showing a blacksmith in the livery stable.

The next addition was in 1998. “Castor Oil, the Cure All” shows a woman giving medicine to her children.

“Born and Raised on the Oregon Trail” was also added in 1998, on 10th and Harrison streets, and is a collage of people who are represented in other murals.

In 1999, three more murals were painted into the collection. “Men, Mules and Merchandise” details a mule train moving supplies from Burns to Vale; “September Morning” shows the building of the first Vale school in 1887; and “Beginners Luck” depicts a man teaching women how to fish.

“Waiting for Sagebrush Annie,” which was added in 2000, shows a steam engine arriving at the Vale train depot. Added that same year was “The Branding” which depicts branding in the willow corral.

Unfortunately, “Sunday Go to Meetin’” is one of the cautionary tales of the Vale murals. Mitchell-Veyna painted it on the medium-density overlay board, which tends to disintegrate. After years of outdoor exposure, the painting is too far beyond repair and the Mural Society will have to commission Mitchell-Veyna to redo the mural.

There are also more current murals, such as “Japanese American Contributions” by Mitchell-Veyna. Added in 2005, this mural is a snapshot of the internment of Japanese-Americans during World War II.

Also added in 2005 was a painting of a Basque man with his dogs, “Basque Sheepherder” by Mitchell-Veyna.

“Added Horsepower in Vale” was the latest mural installment. Designed by Art Mortimer, the outdoor artwork was finished in September 2010 and is on the side of Sinclair Gas Station on Smith Street North.

Mortimer, a California resident with almost 100 murals done nationally, used the help of more than two dozen volunteers to show the convergence of multiple historical modes of transportation in Vale. There is a Buick Roadster, a young man on a bicycle and a horse and buggy.

According to a 2013 story in the Bend Bulletin, if starting from the northwest of Vale, a walking tour of the Vale murals will be a 3-mile journey.

The building that Malheur Drug is located in used to be the Malheur Forwarding Company. It is one of two buildings on A Street West that have survived two fires, the T.T. Nelson Building (located just east of Malheur Drug) being the other.

In 2015, Bend tried to adopt a similar mural project to Vale’s. They were stymied by the Oregon Constitution, which doesn’t distinguish between displays of personal expression and commercial advertisements and the city didn’t want to allow businesses to start making large displays on their walls as advertisements.