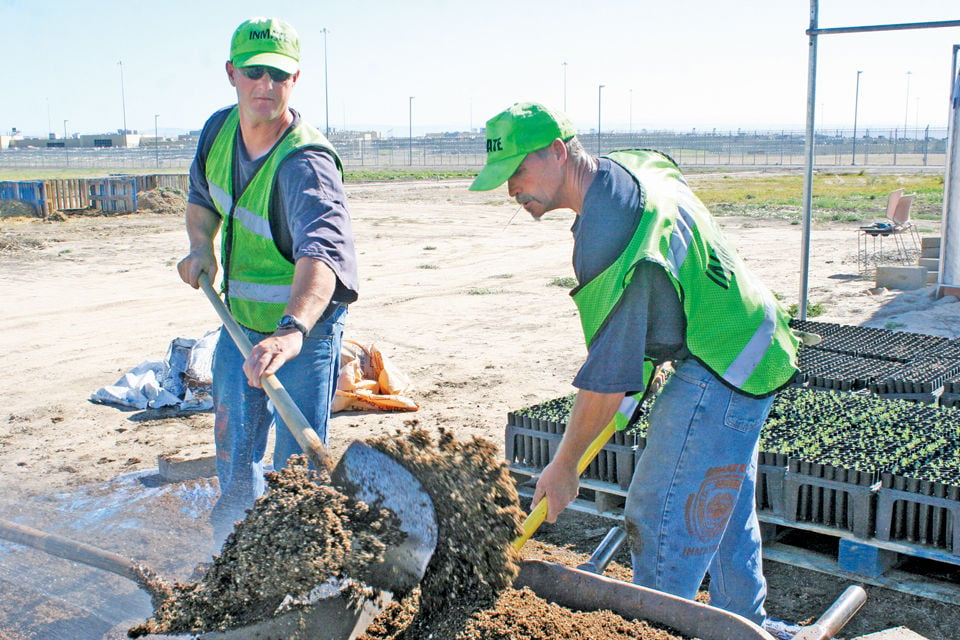 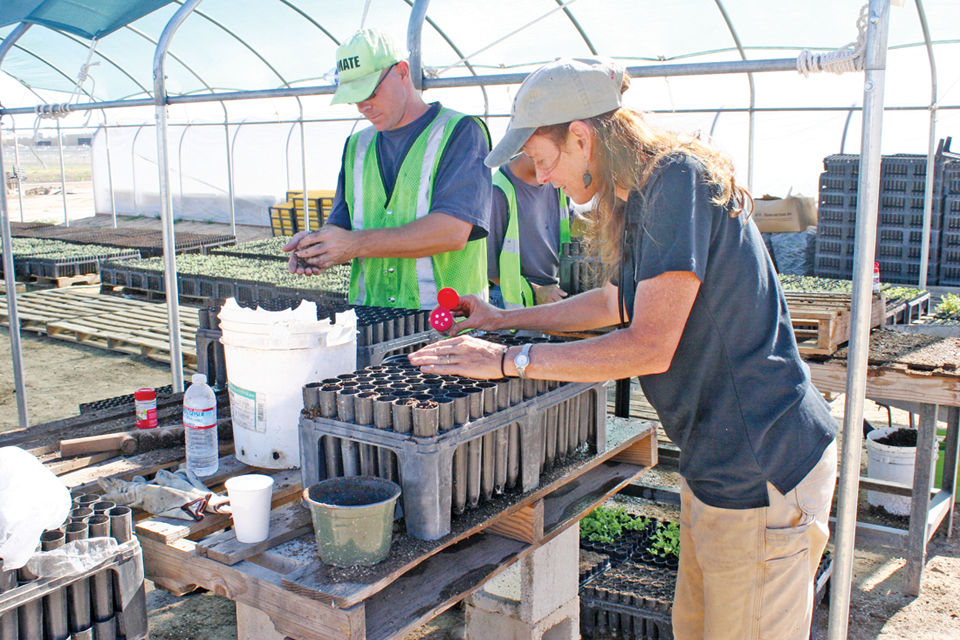 Stacy Moore, right, from the Institute of Applied Ecology, works with inmate Brett Bardewell to fill trays of containers with sagebrush seedlings.

Stacy Moore, right, from the Institute of Applied Ecology, works with inmate Brett Bardewell to fill trays of containers with sagebrush seedlings.

ONTARIO — An Ontario prison program that aims to improve sage grouse habitat has more than doubled in its second year.

Once again, inmates at Snake River Correctional Institution have partnered with the nonprofit Institute for Applied Ecology and Bureau of Land Management in Washington, D.C., and Vale in efforts to improve habitat conditions for species on the decline by sowing and planting seeds.

Last year about 20,000 Wyoming big sagebrush seeds were sowed and planted by SRCI inmates in a pilot program to help restore greater sage grouse habitat. This year, due to the pilot’s success, the correctional facility’s sowing production has doubled to 40,000 plants, and now four other prisons have joined the cause to sow 143,000 plants in total.

Sometime this fall, the seeds will be planted to allow ample time for the roots to establish and grow.

In the meantime, the crew that works on the project seven days a week continues to watch over the plants and even help maintain a vegetable garden at the Ontario prison.

Across the board, the inmates involved said they take joy in their work in the ongoing push to aid the environment and wildlife.

“It’s nice to actually do something that positively impacts the natural resources and aids to the sustainability of the region,” said Jesse Foreman, a garden worker and inmate on the project. “There is so much harm that we do to the environment, that it’s good to take actions that actually make it better.”

Currently the need for sagebrush stems from fire conditions and invasive nonnative plants, which can alter sagebrush’s chances of regrowing. Greater sage grouse,

which are entirely dependent on the plant at every step of their lifecycle for nesting, shelter and food, take a significant loss when the plants suffer.

The bird’s numbers have declined so much across its 11-state habitat in the West that the U.S. Department of Fish and Wildlife is considering whether greater sage grouse should be listed as an endangered species. That decision is expected in September.

Planting sagebrush is one of many steps being taken regionwide in an attempt to prevent that listing.

“It’s something that has to be done. It’s not a matter of should it be done,” said Richard Conn, another garden worker.

If sage grouse is listed as an endangered species, it could create possible protective sanctions that may have adverse effects on the local economy and even recreational opportunities. But the bird isn’t the only species inmates at SRCI are working to help.

There are also efforts to build up conditions for monarch butterflies, which have seen a substantial decline in the past few years.

The butterflies, which are essential pollinators, migrate through North America from Mexico to Canada. Along their journey, they rely heavily on milkweed species to survive the trip.

Ontario inmates this spring sowed 15,000 showy milkweed seeds, which they will eventually plant on restoration sites on public, tribal and private lands in eastern Oregon and parts of Idaho.

The prison’s efforts to restore natural habitats to increase the survival rate of both species has not gone unnoticed.

“Snake River Correctional Institution is leading the way. I’m proud of the supportive staff and the dedication of the inmates,” said Stacy Moore from the Institute of Applied Ecology.

“These conservation sustainability projects in prison are great opportunities. Plus, it’s a win-win for the community, the inmates and for the environment.”

Moore said there may be more projects in the works, such as raising butterfly larvae.

While the projects aim to help the environment, they are also playing a role in building up the men working on them.

“We have all talked about it a lot, and we all come to the same conclusion. It’s a good experience, so that we can actually say when we get out, that we did something positive to help,” said Desmond Hines, one of the many men working on the project.


Tanya Bañuelos is a news reporter at The Argus Observer. She can be reached at (541) 823-4815 or by emailing tanyab@argusobserver.com. To comment on this story, go to www.argusobserver.com.