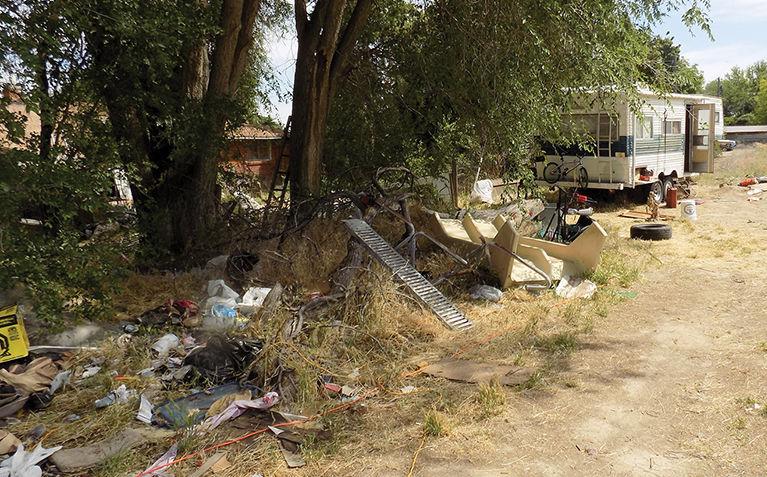 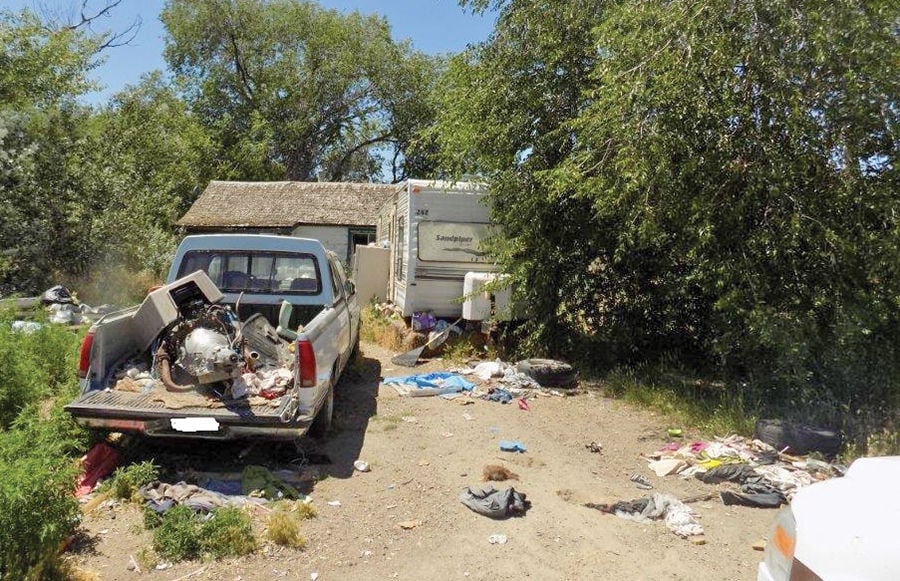 This is another site where trash has gotten out of control, and the Malheur County Sheriff's Office is receiving more complaints regarding these, according to the undersheriff.

This is another site where trash has gotten out of control, and the Malheur County Sheriff's Office is receiving more complaints regarding these, according to the undersheriff.

VALE — Members of the Malheur County Court will wait another week before deciding whether to adopt an ordinance regulating occupancy of recreational vehicles in the county.

A second hearing on the ordinance was held by the court Wednesday, with people testifying for and against the ordinance. Some complained about people not keeping their places up, and others warning the proposed ordinance would violate the U.S. Constitution or Oregon law.

Malheur County staff, along with Eric Evans, director of the County Planning Department and County Counsel Stephanie Williams, said the ordinance was written to clarify existing county code on RV occupancy and that nothing in the ordinance would or should be deemed to violate the state code on the subject.

According to Oregon Laws.Org., state law allows RV occupancy in manufactured or mobile home parks or recreational vehicles parks, which may not be restricted on the sole basis that people are living in an RV.

Occupancy is allowed if RVs are connected to water and electrical supply systems and sewage disposal system, according to the website, and local government agencies are not restricted from imposing other conditions for occupancy or setting up recreation vehicles.

The proposed county ordinance states that RVs may not be occupied as a permanent dwelling in any zone in the county. However, that does not affect any land within the city limits of Ontario, Vale or Nyssa, or land within their urban growth boundaries.

According to the ordinance, occupation of RVs would be allowed during construction of a permanent home, as a hardship, by temporary guests and other circumstances, subject to special provisions of the county code.

Addressing the issue of bad camps during staff comment, Undersheriff Travis Johnson said the Malheur County Sheriff’s Office has been getting a lot of complaints about garbage, sewage and excessive number of RVs, and that those complaints are increasing.

“We need to clean up some things,” he said, also citing drug use in some of the RV camps, some of which have been visited on several occasions.

“Our goal is not to be heavy handed.” Johnson emphasized.

Sgt. Bob Speelman said some of the RV camps are on private property, which presents its own set of challenges. It was brought up later that it takes permission or action by the property owners to evict tenants or squatters, which can take time if the landlords live out of the area.

Speelman said. While some of the issues are in the Ontario area, Speelman said the same problems can be found along the Owyhee River.

Speaking in opposition, Robert Lawrence said the issue for many people living in RVs is the lack of alternatives.

“If you ask those people living in campers or any other alternative style, they will tell you they can’t afford anything else. They also can’t afford to pay to park in a camp,” Lawrence said.

“The problem is homelessness is huge.”

Noting his owns property in one of the outer areas of Ontario, he said that on a tour within a few blocks of his place he counted at least 18 campers, estimating that they were occupied by 24 people.

“What are you gonna do? Throw all of those people out on the street,” Lawrance asked rhetorically.

Shelli Monroe, who said she has lived in Malheur County for more than 20 years, said she believes that the proposed county ordinance, will set up the county for a lawsuit. She said the ordinance would, in her view, violate the 14 amendment of U.S. Constitution, which among other things states, “nor shall any state deprive any person of life, liberty or property without due process of law.”

Monroe also said the ordinance, in her view, goes against at Ninth Circuit Court ruling that people were being singled out and persecuted for being homeless/or poor.

“For many homeless persons, their automobile, RV, tent, etc., may be their last major possession that can provide shelter for their self/family from the elements,” Monroe said.

The court took the testimony under advisement until its next meeting, July 3, as Court members said they wanted to consider some of the issues brought up during the hearing.

Our goal is not to be heavy handed.

By the way, I don't think the house could be occupied by that helper during the disposition of the estate...

By the way, doesn't Mr, Wolfe have any other pictures than these two? He trots them out over and over.

I had some suspicions that the first picture isn't quite as it seems...you see, that trailer is there because the person was hired to help clean of the property for selling after the owners died and left their son alone there and somewhat despondent. I've know the family for 35 years and yes it is a big chore. The county is working with the remaining family, and you don't know the half of it. The other place is near the end of Alameda (Thrifty?) and both of these properties are outside of the city limits IIRC despite the proximity to the Elementary. I think the neighborhood should be actual neighbors and help. This is not a typical situation and everyone is part of the solution.