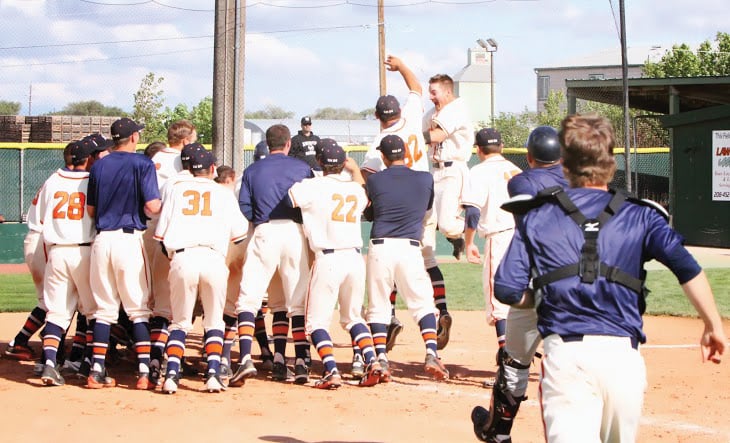 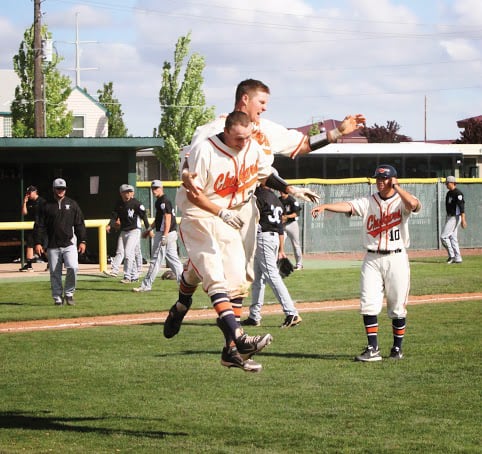 TVCC catcher Zach Reay celebrates with a teammate after the Chukars defeated Wenatchee in the NWAACC East Regional playoff game on May 17.

TVCC catcher Zach Reay celebrates with a teammate after the Chukars defeated Wenatchee in the NWAACC East Regional playoff game on May 17.

Ontario — By virtually any measure, Treasure Valley Community College’s season was a smashing success, perhaps even their best ever. The team had racked up 37 wins, clinched their first ever division championship, and had nine players earn all conference honors, most in school history.

But the long list of accomplishments doesn’t tell half of the story. In fact, it hardly scratches the surface. Oftentimes in sports, we become enveloped in the culture of big numbers and championships, of winning at all costs, and focusing solely on the bottom line that the truly great stories that teams write for themselves, and the journeys that they take building those stories become relegated to just footnotes.

The journey for the 2013 TVCC Chukars began back in late October, in one of the more tragic ways imaginable, and for first-year head coach Aaron Sutton, in a way that no coach could ever truly account for. That was when Chukar outfielder Cory Holm crashed head first into the outfield wall, crushing his C7 vertebra.

“Obviously we never expected anything like this to ever happen,” Sutton said. “It doesn’t matter if I had been coaching one year or 50, Cory’s accident is just something you can’t prepare for.”

As the terrible situation unfolded, baseball was the last thing on anyone’s mind.

“We all took a couple days off to gather our minds,” sophomore Mitch Skaggs said. “We made sure to take the opportunity to visit Cory in the hospital as much as we could, and during that time was when we really came together as a team.”

One could argue that the inspiration for the Chukars season, “24/7,” was born right then and there, an inspiration that would carry them through their season.

“We wanted to make sure and give them some time off, but there was a delicate balance there,” Sutton said. “Once we went back to work, we wanted to keep them on a solid program and schedule, partly because we needed to start working towards the season, and partly to make sure the guys didn’t become totally disengaged with the game because of Cory’s accident.”

“I think we worked harder this winter than we had in any previous ones, and Cory definitely provided us with that extra motivation,” pitcher Alex Bunn said. “He was one of the hardest workers on the team, and that pushed us to go harder and harder. We wanted to live up to the standard he set.”

While the offseason is in large part about working on fundamentals and conditioning, for TVCC, it was more about character building and chemistry, two attributes that would play an integral role in the Chukars’ success. Those were never more on display than “Hell Week,” a grueling team building and training program inspired by the Navy Seals.

“We already knew this group had tremendous character because of what they had been through already, but after that week we knew we had something special,” Sutton said.

The typical day during the weak began before dawn, often in temperatures hovering around 10 degrees.

“We had them doing bear crawls, wheelbarrows, we put 135-pound weights on their backs and made them run sprints, we really threw it all at them,” Sutton said. “When we look back on it now, it was really quite an accomplishment getting through it.”

“They put us through the grind,” Bunn said. “It wasn’t fun at all, but if we had to go back, I think we would all do it again in a heartbeat.”

It also became clear that this team was playing for something more than an average team, more than just wins and losses.

“We had a team meeting right before the season started, where we talked about what we wanted to achieve,” sophomore pitcher Markus Lively said. “But playing for and dedicating the season to Cory was always number one.”

“I think what Cory’s accident taught us more than anything, is that it put us face to face with the reality that any pitch, any at bat could be our last,” Sutton said. “That can be scary, but for us, I think we used it to drive us and push us everyday. Cory taught us to play for each other above all else, especially during the low points.”

Perhaps their deepest valley came late in the season at Wenatchee.

“One of our goals for the season was not to be swept on the road, and they beat us up a little bit,” Sutton said. “After the game, we had a fairly long discussion as a team about dealing with adversity. As a coaching staff, we could tell right away after that, that they were going to bounce back. Practice became much crisper, more dynamic, and that gave us a huge momentum boost that pushed us to a strong finish.”

A major contributor was their undeniable chemistry, something that every team looks for, but few ever find.

“We just had a tremendous belief and faith in one another,” Bunn said. “And the more we won, the more confidence we had in each other to get the job done.”

This was not an organic or spontaneous occurrence, however, but rather something that developed over months and months of work.

“(Our chemistry) took a lot of time to build, starting in the early fall and progressing into the season,” catcher Zach Reay said. “But one thing about this team is that we genuinely like and care about each other. We all get along with each other, so after a while it became almost second nature.”

This team also played an integral role in the community, volunteering for several events throughout the year donating their time for a number of worthy causes.

“We get great support from the community all season,” Reay said. “And we do our part to give back as much as we can. In the fall we sell oranges as a fundraiser and it’s cool to see those relationships develop where people are almost expecting us to stop by and are disappointed if we don’t.”

In addition to their orange selling fundraiser, members of the Treasure Valley baseball team volunteered several times to serve at the soup kitchen, took part in the Festival of Trees and participated in the Lunch Buddy program at May Roberts Elementary and the National Reading Week program.

Although their season did not ultimately reach the conclusion they had in mind, there is a sense that the ending was in some ways inconsequential, as 2013 was much more about what TVCC accomplished than what they did not.

“We came into the season with a list of goals and we achieved just about every one,” Reay said. “Considering all that has happened, I think that’s pretty impressive.”

“I really can’t point to any single moment or achievement to define our season,” Lively said. “I think all the moments along the way that laid the foundation were equally important to where we ended up.”

Sutton echoed Lively’s comments, stating that the everyday process of the group was ultimately more important than the end result, the individual parts, perhaps, greater than the sum.

“It really was all about the journey more than anything else,” he said. “Just watching what these guys had to overcome, and then seeing them come together and have the season they had, makes them a very special group of men.”

Jarrad Felgenhauer is a reporter at the Argus Observer. He can be reached at (541) 823-4811 or by emailing jarradf@argusobserver.com. To comment on this story, go to www.argusobserver.com

As the Chukars battled through the peaks and valleys of their season, Holm and his family di…