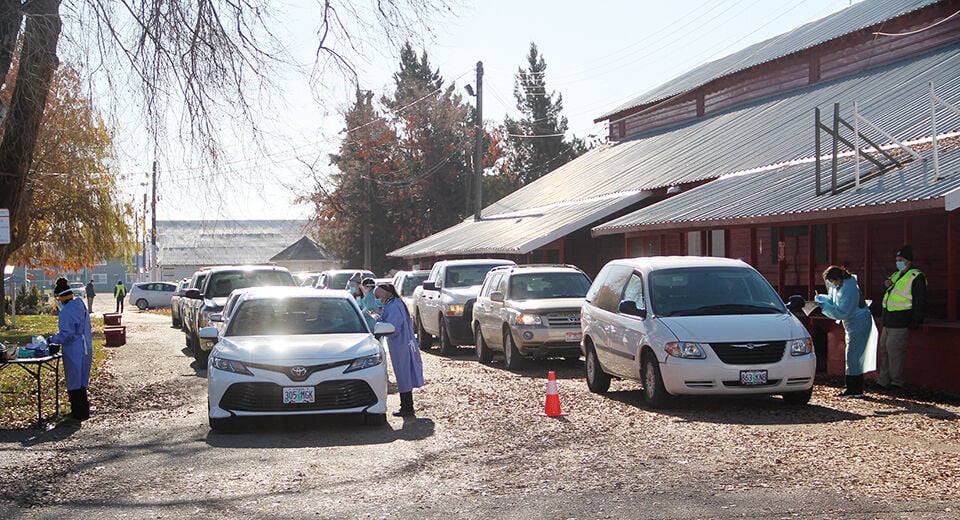 A line of cars waits for free COVID testing at the Malheur County fairgrounds on Dec. 1. Testing will take place from noon to 4 p.m. today at the Ontario Municipal Airport Firehouse at 581 S.W. 33rd St., Ontario. 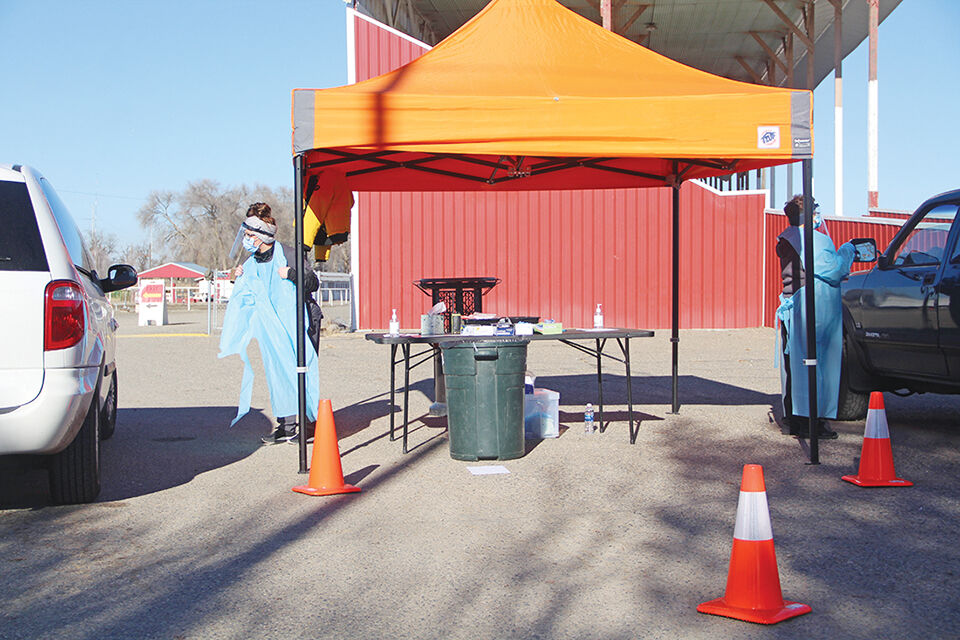 Staff are taking samples from those wanting tests. One worker is changing into a new PPE gown in between vehicles that came through the dual lanes set up for testing.

A line of cars waits for free COVID testing at the Malheur County fairgrounds on Dec. 1. Testing will take place from noon to 4 p.m. today at the Ontario Municipal Airport Firehouse at 581 S.W. 33rd St., Ontario.

Staff are taking samples from those wanting tests. One worker is changing into a new PPE gown in between vehicles that came through the dual lanes set up for testing.

A 15th round of free COVID-19 testing was held Tuesday for two hours longer than expected. Rich Harriman, emergency manager for the Malheur County Sheriff’s Office said due to a “snafu” with the online registration for the event, the Malheur County Health Department had to set up at 10 a.m. instead of noon as planned. Harriman said when they noticed that they already had 18 people signed up for 10 a.m. time slot, they hurried and got everything set up as quickly as possible.

“We just set up really fast and got ‘em through,” said Harriman.

Sarah Poe, director of Malheur County Health Department, said in a phone interview on Tuesday, “we planned strategically for five days after Thanksgiving,” expecting COVID case numbers to be higher.

She said her top concerns are primarily for outbreaks.

“It doesn’t have an end date. If we don’t drive our cases down, it may last through vaccinations,” she said.

And what is especially concerning, Poe said, is that so many people believe that vaccines are just around the corner.

“People think they are going to get a vaccine in six weeks and that’s not true,” she said. “People still have to take precautions when those get here. It’s going to be a while. Waiting for a vaccine is not a solution.”

Additionally, states will get a limited few when first rounds are available, and those will go to specific people first.

“What we know is about 30,000 are slated to come to Oregon for the first round, and will go to people who care for COVID patients, that’s who first,” Poe said.

After that, the hope is hospital staff, longterm facility staff and residents, then members of fire and police departments, then health-care providers.

“Then, after all that, we’ll start looking at people over the age of 65 with underlying health conditions,” she said.

The CDC will be responsible for making a determination of who gets it first, and that will then go to the states. In Oregon, health authorities will follow Oregon Investigative Guidelines, which has a distribution plan.

It’s great news about COVID-19 vaccines becoming closer to reality, Poe said, adding that it feels like light at the end of the tunnel. However, she urged people to still be cautious and make social distancing measures a top priority.

“I’ve heard it put, ‘We’re still on the highway, don’t take off your seatbelt,” Poe said.

Misconceptions about testing, too

Harriman said that the common misconception about testing is that more tests mean higher positive numbers. He clarified that in a large pool of tests, if an increasing number of tests come back negative, the county’s numbers improve as a larger sampling size of residents has been taken, so a more accurate picture of the actual number of cases can be seen more clearly.

Higher testing capacity will help drive down rates, Poe said. With more testing rates, there will be more positive cases, but those will be offset with more negative cases.

“It will drive the positivity rate down,” Poe said.

This would help out metrics, which so far are keeping Malheur County operating under the tightest of state restrictions.

“Really, our way through this is we reduce the amount of spread, we reduce the virus, people follow precautions carefully,” Poe said.

She said she doesn’t want this to be a political battle any longer, and has not personally taken up that fight.

“I generally want people to be healthy in my community, and really believe in the good of people in our community, and that we can take care of each other.”

COVID is hitting close to home for many.

“I’ve had people close to me who have been very, very sick and people close to my family die,” Poe said. “I feel like we’re in this place where everybody knows somebody [that has been diagnosed with COVID]. This is becoming far more personal.”

She said her plea to the community is to keep in mind the testing is a local grassroots, Malheur County response and not about “the governor telling us what to do.”

“We’ve got to protect the people we love,” she said.

“It really comes down to people keeping masks on properly and not going out if they’re sick,” she said. “We have a lot of people who are sick in our community right now. They need to get tested or stay home.”

This testing event will be the last one to be held at the fairgrounds this year, due to the dropping temperatures. Two more testing events are planned on Dec. 8 and Dec. 15, inside the Ontario Municipal Airport Firehouse.