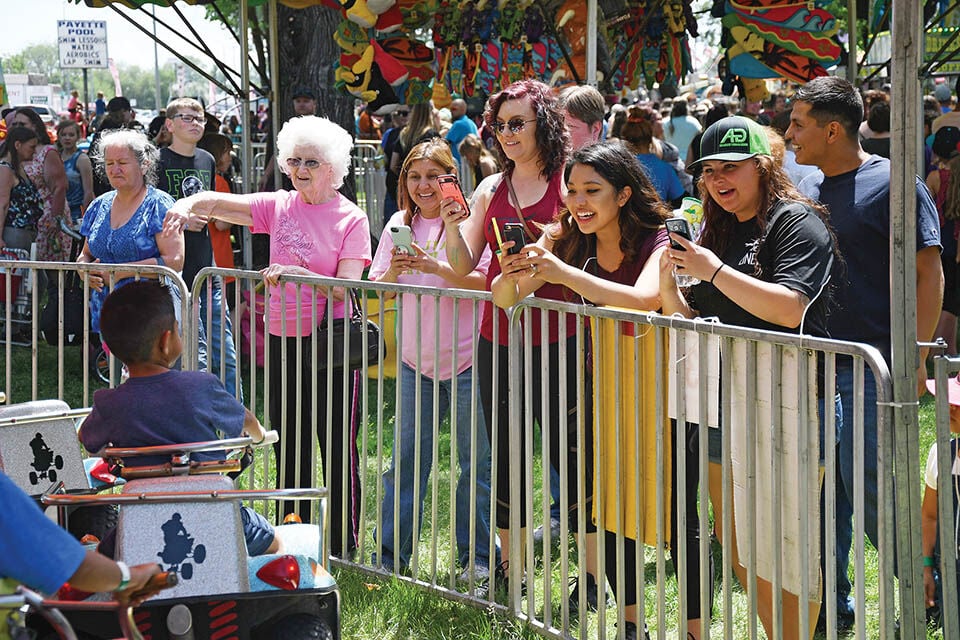 A crowd of adults watches and interacts with their respective young ones as they take a spin on one of the amusement rides during the Payette Apple Blossom Festival in 2018. This year's festival gets underway Wednesday through Sunday. 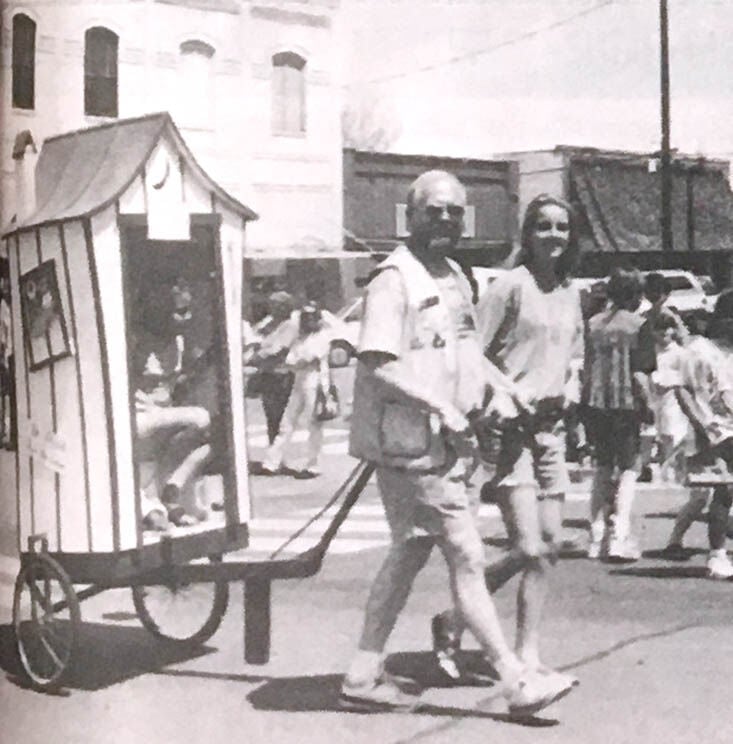 Payette Syringa Lions Club members pull an outhouse during the 1993 Payette Apple Blossom Festival, for which the theme was Paint Your Wagon. This year's theme for the parade is "Thriller."

A crowd of adults watches and interacts with their respective young ones as they take a spin on one of the amusement rides during the Payette Apple Blossom Festival in 2018. This year's festival gets underway Wednesday through Sunday.

Payette Syringa Lions Club members pull an outhouse during the 1993 Payette Apple Blossom Festival, for which the theme was Paint Your Wagon. This year's theme for the parade is "Thriller."

This article is the first in a series about the Payette Apple Blossom Festival. Up Wednesday: What to expect this year.

Following a shutdown in 2020 due to the COVID-19 pandemic, the Payette Apple Blossom Festival returns for its 98th anniversary in 2021. But how did the festival get planted in Payette? What has helped it take root? The Independent-Enterprise dug deep into its archives to share with you how this tradition’s seeds were sown and share examples of what has kept it growing to where it is today.

The festival started at the grounds of Payette High School where then-Payette Mayor I.R. Woodward handed over the key to the city to J.H. Davis, president of the Payette Chamber of Commerce. The festival came with a parade, musical and other performances by local organizations and even tug-of war and motorcycle racing events.

While the weather that year was cold, windy and occasionally rainy, the festival saw patronage from neighboring communities as well as Payette residents. The Ontario Chamber of Commerce even got involved, bringing its band and Reserve Officers Training Corps to assist in planning and performing the day’s parade and lending support to entertainments throughout the day.

The May Queen, Mildred Barton, was led to her chair for the event by Woodward and crowned by then-Idaho Gov. Charles Moore, guest of honor.

A headline in the Enterprise called the event “a crowning success.”

Even in the lean days of the Great Depression (1929-1941), the festival proved successful. The Payette Independent reported an estimated 5,000 people attended the festival on April 30, 1931. That year did see one tragedy, when Boise aviator Jack Dawne died in a plane crash while performing stunts over the Payette field early that evening.

But spirits flew high for the remainder of the festival, even as parade floats cruised slowly through the main thoroughfare at ground level. The May Queen that year was Marjorie Hill of Fruitland, crowned by Gov. C. Ben Ross.

1931 would be the year the Portia Club stepped back from running the festival as the city of Payette established a dedicated Apple Blossom committee to run it from there.

Throughout the 1950s and 60s, the festival became known simply as the Blossom Festival and later the title “Boomerang Days” was added in the 1970s. Attendance projections climbed to an estimated 15,000 in 1963.

As the century turned, so did the engines … of modified lawnmowers. In 2000, a lawn dragster race was a highlight of the festival, alongside a bike-a-thon for charity, a pie eating contest at the Payette Albertsons and The Grand Ladies Encampment breakfast in Bancroft Park.

The theme in 2000 was “Helping the Imagination of Youth Take Flight,” in which the festival centered around introducing young people to the aviation industry. The Young Eagles Program took to the Payette Airport to give kids free airplane rides, showing them what it was like to fly a plane.

Bad apples fall into the barrel

Security proved itself necessary at the festival in the 21st Century, as gang-related fights broke out and threatened the atmosphere of the festival in 2006, along with several vehicle burglaries. Then-Payette Police Chief Mark Clark said his force had not anticipated that young gang members would come to the festival wearing their respective colors to entice fights, but they would “deal with them accordingly.”

The department has since worked with the Payette Chamber of Commerce to help maintain a family-friendly environment, albeit with increased police presence. According to Williams, a portion of the proceeds from the festival pays for the additional time incurred.

The festival turned 90 in 2013. In the last 10 years, the event has included an ice cream social to kick things off, a lantern parade on Main Street after sunset as presented by Westside Elementary School students, quilt shows, movie nights at the Payette Public Library (except when they were rained out in 2015), free concerts by local bands and high school students, and even a special cake carried by the Wells Fargo parade float in 2017 to celebrate Payette County’s centennial.

Pausing for the pandemic

When COVID-19 made itself known in the world in spring 2020, major events worldwide came to a grinding halt. Like most other local public gatherings that year, the Apple Blossom Festival also landed on the chopping block.

Even when Gov. Brad Little replaced his March 2020 stay home order with his Stay Healthy Order in May, the timetable was just too tight, according to then-event treasurer Kahlia Morin. She summarized the decision to cancel the event in a March 30, 2020 email to the newspaper, saying, “There are just so many factors.”

At that time, Morin said the event would come back “with a bang” in 2021. According to Linda Williams, the festival incurred no gains but also no losses because coordination for the festival hadn’t yet begun when the pandemic hit and no deposits had been made.

“We called it off early enough that we didn’t have any expenses out there yet,” said Williams. “We just kind of shut down for the year and [held] over until this year.”

These days, the festival incorporates many modern staples of fairs and festivals including food trucks and booths, a carnival with rides, and live performances at the Kiwanis Band Shell. This year’s festival will get underway Wednesday and go through Sunday.

“I think it’s been pretty significant because people will go to Albertsons or they’ll go into some of the little antique stores downtown or something, especially if they’ve never been here before,” said Linda Williams. “I think we have a lot of new people to the area, so I think it’s going to be a real draw for them just because they’ve haven’t been to it before.”

The carnival, however, is among the features to come back with social distancing. Williams said the event will see increased sanitation, as deemed practical.

Concerts at the band shell are also set to come back, with The Gary Tackett Band, Cliff Miller Music and Kill-a-brew among local bands set to take the stage.

But if you’re looking for the cornhole tournament, look for it next year. The same goes with the ice cream social, which typically precedes the festival. Due to the ongoing pandemic, some things will have to wait for 2022 to mark a comeback.

“I think it’s going to be really busy this year, just because this is one of the first events that is really happening since mandates and all those things, since they’ve been lifted and stuff.”