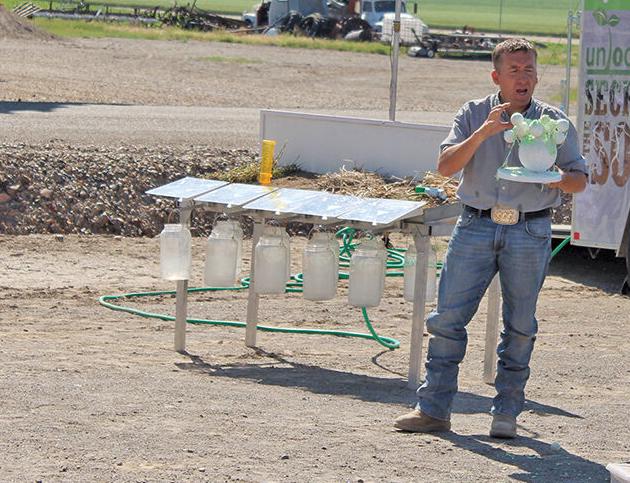 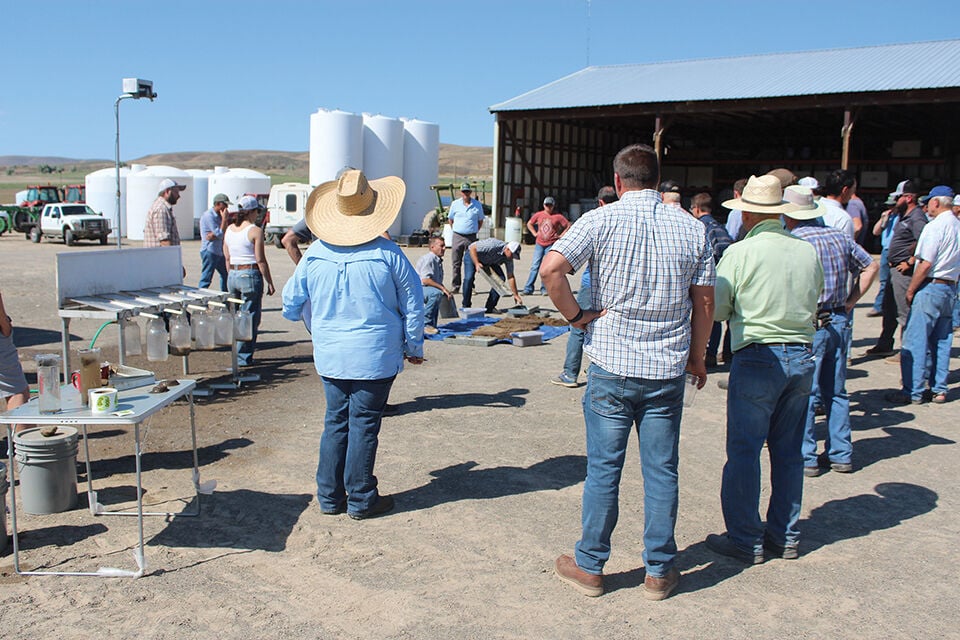 The crowd watches as Nick Sirovatka explains the differences in the soil samples after an irrigation demonstration in which the samples were wetted down and then transferred to a tarp for a visual representation.

The crowd watches as Nick Sirovatka explains the differences in the soil samples after an irrigation demonstration in which the samples were wetted down and then transferred to a tarp for a visual representation.

Crowds of interested people showed up to hear a presentation about it at Fletcher Gulch Farm on Thursday afternoon.

Sirovatka explained how healthy soil is an ecosystem unto itself complete with beneficial microorganisms that are useful in maintaining soil structure.

In a demonstration, he placed two identical looking clumps of soil in a sieve at the top of a graduated cylinder and poured water over the top of both. When the water was absorbed by the samples, one started to break apart while the other stayed intact. Sirovatka said that soil that breaks apart like this can erode over time during periods of rain and said that the average raindrop falls at a speed of 2 mph and that speed increases during a storm when wind speeds pick up.

The next experiment Sirovatka did to show differences in soil involved using different soil samples taken from the local area from different sites.

All of the samples were sprayed down as if being irrigated. The runoff water was collected as it filtered through the soil. Some samples were mostly clear, while others were murkier showing soil separation.

Demonstrating how microbes in the soil break down fibers, such as cotton, for the carbon, Sirovatka showed a new pair of underwear briefs to the crowd and said how a pair like this was buried for 60 days in a field of healthy soil. He then showed the results of the buried pair of underwear, which had barely any fabric remaining.

Some of the “keys to healthy soil” he outlined included keeping soil covered, minimizing disturbance of the soil, keeping living roots in the soil and diversifying plant species.