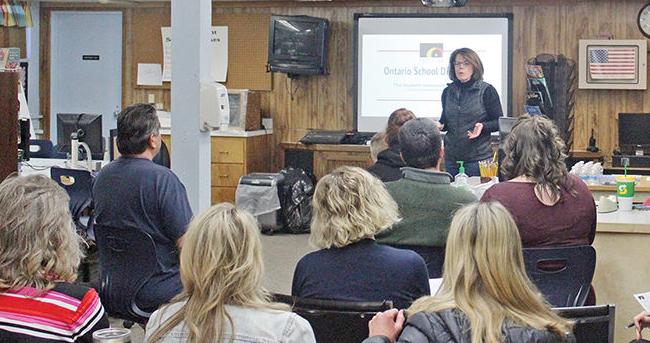 Pioneer Elementary School Principal Erin O’Hara-Rines presents to about a dozen attendees of Tuesday night’s parent/community forum at the school. 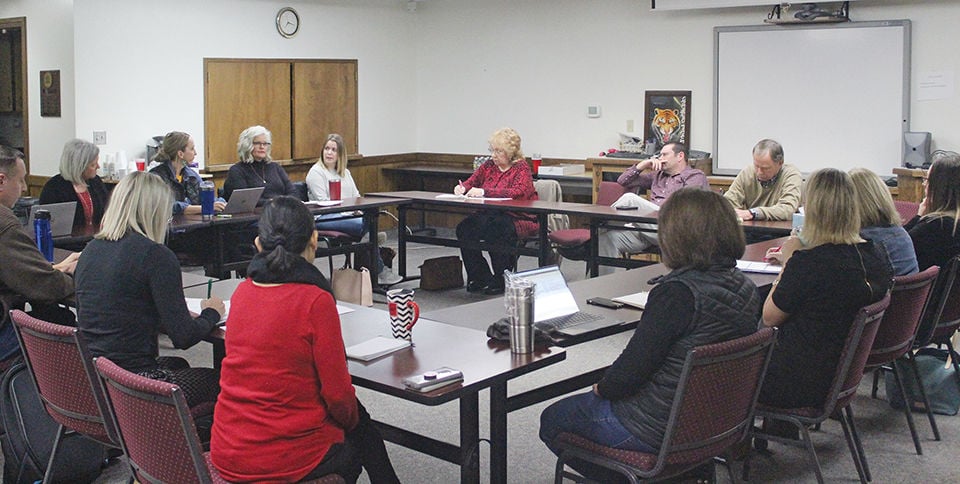 Pioneer Elementary School Principal Erin O’Hara-Rines presents to about a dozen attendees of Tuesday night’s parent/community forum at the school.

ONTARIO — Before the sun had risen Tuesday morning, administrators and board members of Ontario School District were hard at work discussing potential changes to the configuration of the elementary schools.

During a Tuesday morning meeting, administrators met with the Ontario School Board of Directors to update them on the status of a proposed reconfiguration of the elementary schools of Ontario to fit a grade-level layout.

The School Board will have to vote on the change during its March 30 meeting.

Using money from the Student Success Act, Ontario School District administrators are working to restructure the elementary schools of the district so that the three bigger schools (Aiken, Alameda and May Roberts) are each assigned specific grade levels.

The restructuring of the schools would lead to a new look for almost every school in the district. The proposed changes follow.

• Alameda Elementary School would be turned into Ontario Primary School, and will house the kindergarten and first grade.

• May Roberts Elementary School would have the fourth-, fifth- and sixth-graders and be renamed Ontario Intermediate.

• Pioneer Elementary School would be renamed to Ontario STREAM Academy and would change into a kindergarten through sixth grade school focused on science, technology, reading, engineering, arts and math. This means that the school district could choose a different structure of education for that school.

• Cairo Elementary School would change into Ontario Rural School and remain as a seven-classroom school serving kindergarten through sixth grade in a “traditional small rural” setting.

After reviewing more 1,300 surveys regarding the Student Investment Account, Ontario School District was able to narrow down the biggest needs for the district to four items:

According to Taryn Smith, public relations and communications director for the district, when the four items were on the board, the administrators had an “aha moment,” explaining that creating grade level schools couple help with several of these items.

In moving all grades to one school, Smith explains it would allow the district to have more balanced class sizes, getting rid of the current situation where some teachers are facing nearly 30 students and some classes are lower into the teens.

With the money put into its Student Investment Account (made through the SSA), the district is also hoping to hire an extra first grade teacher.

The change, administrators say, will also help with mobility among the district. If a student is attending schools because of their age and their family moved from one area of Ontario to another, the student wouldn’t have to switch schools.

The change will also mean that teachers will be in the same building as their peers. Administrators say this will make it easier to collaborate with each other (this was brought up at a previous board meeting as something that’s helped a lot at Ontario Middle School in recent years).

Unity was also a big topic of the Tuesday morning meeting between the board and school administrators. The change in the schools would include renaming all of the schools so that they all start with “Ontario” and their mascot would all be the Tigers.

Another item that several administrators brought up was how big it will be for students to navigate their entire elementary career with the same cohort (as opposed to the current model where five cohorts meet at Ontario Middle School).

“We are trying to unite this community. This town is not united,” Alameda Elementary Principal Andrea Buchholz said. “One town. One tiger. Go Tigers.”

On Tuesday morning, administrators from every elementary school in the district met with the Ontario School District Board of Directors in an informal quorum to receive feedback from the board. The administration previously met with the board to discuss the school reconfiguration during its regular meeting on Feb. 24.

“I know things haven’t been the smoothest lately, but we wanted to all get on the same page,” Buchholz said.

Board Director Derrick Draper said there has been a bit of uproar throughout Ontario over the past week. Following last Monday’s work session, the administration of the elementary schools decided to meet with their staff on the proposed changes. With the information now public, many people were voicing their concerns.

“A lot of families have reached out to me,” Draper said. “They are unpleased and unhappy.”

A lack of community outreach was also brought up by the board directors, including from Renae Corn.

“The lack of parental involvement is troubling,” she said. “We’d be a lot more successful if we slowed this wagon down.”

Draper added that having a group of parents and community members in a task force is beneficial to the school district, as there are a lot of people in the district who don’t want administrators telling them how good of an idea this is — they want to hear it from their peers.

Ontario School District Director of Student Services Melissa Williams said if the district is to create a task force, it will need to be in correlation with the forums, as many of the district’s underrepresented families wouldn’t be a part of a task force.

Buchholz responded saying that the administrators can reach out to community members and create a parent/community-run task force that can be at the parent forums.

Corn said she was worried about the tight turnaround for the proposal of the reconfiguration and the need for the board to vote on it when the SIA is due on April 15. Corn said that does not give the district much time to get feedback from the community.

“That’s what I asked for eighteen months ago,” she responded, after reading from minutes from a previous board meeting. “I’m disappointed that we’re sitting here today asking for our blessing on this.”

Ontario School District Superintendent Nikki Albisu, responded to Corn, saying that it wasn’t until recently that the district was made aware of how much money it was getting from the SSA, which makes the whole reconfiguration possible.

Transportation was one of the big questions coming out of Tuesday morning’s meeting. Buchholz mentioned that every parent she’s heard from brings up the topic of busing.

During Tuesday night’s community forum, Pioneer Elementary Principal Erin O’Hara-Rines said that Pioneer Elementary is already struggling with bus trips at its school, and this would alleviate a lot of stress from Pioneer students.

Due to the way Ontario’s school boundaries are drawn up, O’Hara-Rines said Pioneer gets both its surrounding area, along with certain sections of Ontario near Sierra Vista Drive and near Oregon Street by the freeway. That separation of households means that there are some students sitting on the bus to Pioneer Elementary for an hour each morning, O’Hara-Rines said.

“Some parents are now being afforded the opportunity to send their kids to school in town,” she said.

“That is a legitimate concern,” Buchholz responded.

Another concern brought up by Evans was the future of the Parent-Teacher Organizations in the district. With the new layout, the vast majority of students in the district will not spend their whole career in the same elementary school.

The change to the separate PTOs could affect long-time events like the Cairo Chili Feed or the Alameda Spaghetti Feed.

None of the administrators had a concrete solution to the change in the PTO, but one idea thrown around was to create a district-wide PTO that could take over those long-running programs.

Board member Blanca Rodriguez closed the meeting mentioning how important it is for everyone to be on the same page as the item of restructuring the schools moves forward.

“We need to grow together,” she said. “Children and parents.”

Nik Streng is a sports and news reporter at The Argus Observer. He can be reached at (541) 823-4806 or by emailing niklass@argusobserver.com. To comment on this story, go to www.argusobserver.com.

We are trying to unite this community. This town is not united. One town. One tiger. Go Tigers.

The Student Success Act, signed by Oregon Gov. Kate Brown on May 20, 2019 as Oregon House Bill 3427, is an investment of $1 billion in Oregon education every year. School districts around the state will get a portion of those funds. According to Taryn Smith, public relations and communications director for Ontario School District, the district is anticipating a sum of around $2.1 million from the SSA.

“We are trying to unite this community. This town is not united. One town. One tiger. Go Tigers.” said the principal who lives in Nyssa.