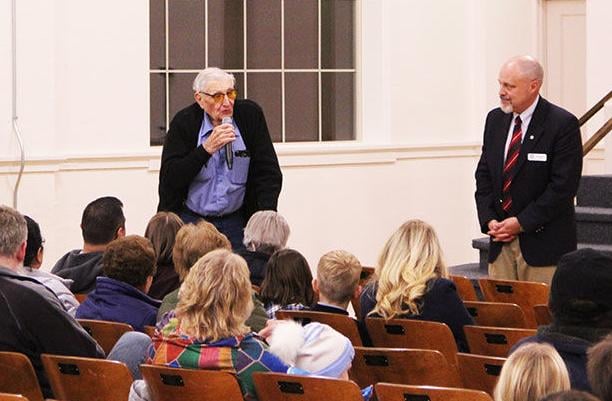 George Strange, middle, speaks at the Treasure Valley Classical Academy’s open house on Tuesday night. Strange went to Fruitland High School in the Olde School and graduated in 1941. While Strange wasn’t scheduled to speak on Tuesday night, TVCA Principal Stephen Lambert, right, said graduates of 1941 are given the right to public comment, which the audience applauded. 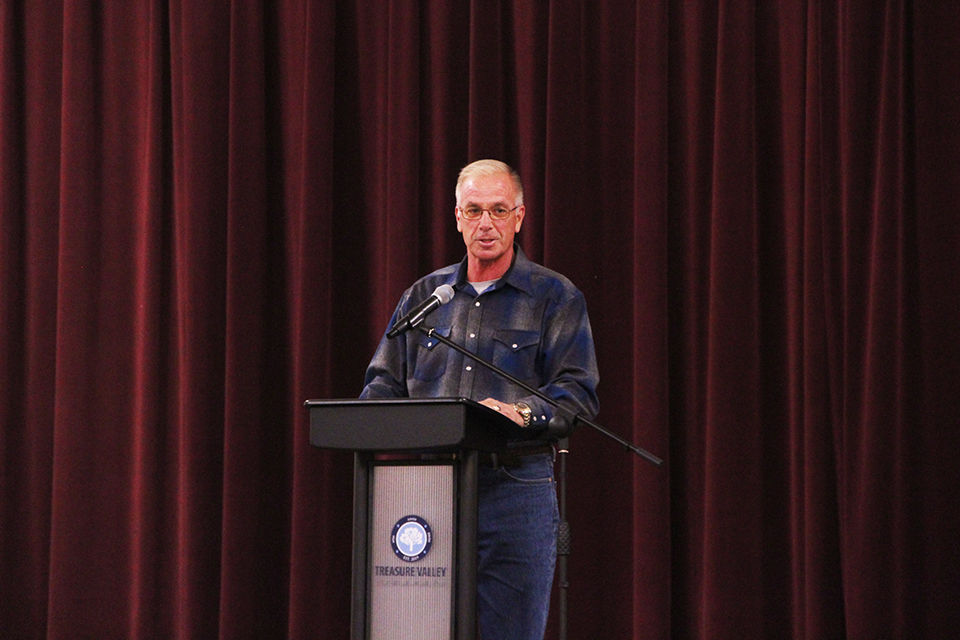 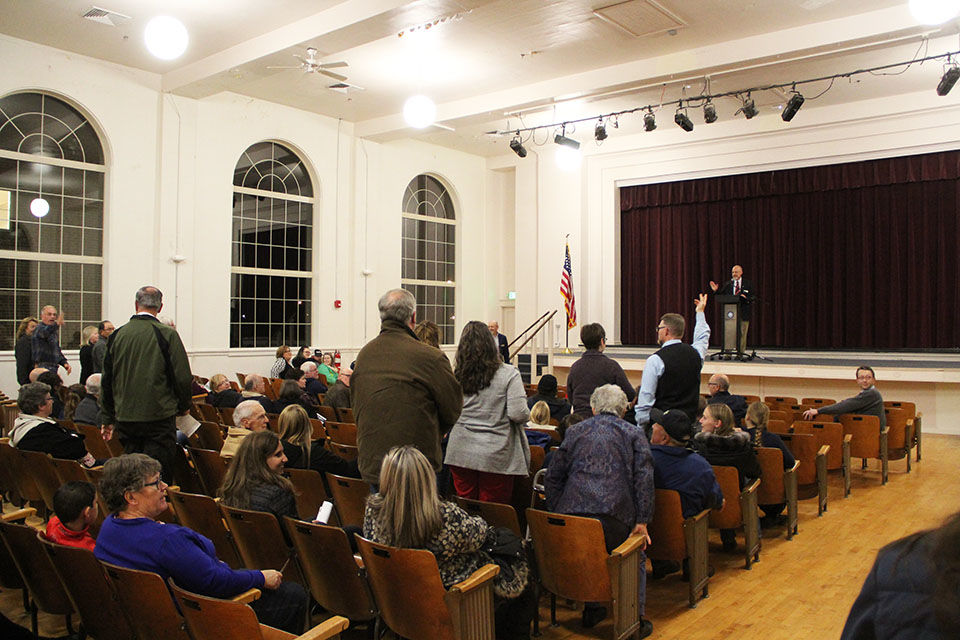 Members of the audience who graduated from Fruitland High School while it was still in the Olde School stand in recognition.

George Strange, middle, speaks at the Treasure Valley Classical Academy’s open house on Tuesday night. Strange went to Fruitland High School in the Olde School and graduated in 1941. While Strange wasn’t scheduled to speak on Tuesday night, TVCA Principal Stephen Lambert, right, said graduates of 1941 are given the right to public comment, which the audience applauded.

Members of the audience who graduated from Fruitland High School while it was still in the Olde School stand in recognition.

FRUITLAND — Upwards of 100 locals gathered at the Treasure Valley Classical Academy for its first open house.

While the evening gave many people their first chance to see what the inside of Payette County’s newest school is like, while meeting some of the faculty, it doubled as the 90th anniversary of the facility, which has been known as the Fruitland Olde School.

Lambert asked members of the audience to remain standing as he rolled back the graduation dates. The last remaining member standing was George Strange, who received his diploma in 1941.

“This is a school returning to its roots and its purpose,” Lambert said.

One of the first speakers on Tuesday night was Michael Leavitt, who was the Master Chief Petty Officer of the Coast Guard until he retired in 2014. Leavitt graduated from Fruitland in 1979.

Calling Fruitland his family’s “happy place,” Leavitt said the community’s support of the school has been the driving force behind reopening the facility.

“That’s what makes the town so special,” he said.

Update on the school

With just over a couple of months gone, and the first round of parent-teacher conferences done, Lambert said the school has been running smoothly so far.

“We have teachers that are about the business of teaching,” Lambert said. “And the students are all about knowledge and learning.”

According to Lambert, TVCA has 311 students among its kindergarten through sixth grade classes and he emphasized that the goal is to continue to grow one grade per year until TVCA is a full K-12 school.

“Every week that goes by, we settle a little bit more and just get more into our mission,” Lambert said. “We’re already thinking about next year and how we’re going to have to expand. Our board is hard at work on that.”

An asset to the community

Fruitland city council member Kari Peterson also spoke at Tuesday’s open house. Peterson has two children that attend the charter, and she said that the school’s opening has been a major benefit to the city.

“What the school has done for the city. The building is something meant to be treasured,”Peterson said. “But now that it’s actually happened, it feels like downtown has come alive again.”

The relationship between the city and TVCA extends beyond a member sending her children to the school, as well. TVCA holds its school board meetings at Fruitland City Hall.

No longer just a dream

Fighting back tears, Chuck Baines took the stage to discuss the history of keeping the Olde School alive.

“This is the culmination of years and years of dreaming,” Baines said. “A dream that started with my mom and dad.”

Baines was speaking on behalf of his mother, Konnie Baines, who was in attendance on Tuesday but was unable to speak following some health issues she’s had recently. Connie Baines and her husband, Donald Baines, were the leaders of the Save Our School group, later changed to the 501C3 nonprofit group Alma Mater Inc., that kept the Olde School alive and turned it into the Olde School Community Center.

Donald Baines died in December of 2018.