Following a unanimous vote, the Adrian School District Board of Directors took one more step on Thursday in trying to return students to the classroom as they signed a resolution that is ready to send to the state of Oregon.

During its meeting, board member Jake Speelmon had his attorney, Dustin Martinsen of Vale-based law firm Butler & Looney PC, on hand to give an update of their pending lawsuit against leaders of Oregon Health Authority and the Oregon Department of Education.

The pending lawsuit against the state was first announced on Aug. 13 by Speelmon. He said the board was, at the time, seeking legal counsel with the ultimate goal to be the Adrian School Board of Directors suing ODE for “failing to allow [the board] to provide an adequate education to the students in [Adrian School District].”

On Thursday, Martinsen said he has been in talks with representation from both OHA and ODE, and said that the state is looking to revise some of the metics for reopening schools. On Oct. 6, Oregon Public Broadcasting first reported that Oregon Gov. Kate Brown announced that day that the state would be reevaluating the metrics the state uses when it comes to opening schools.

In that press conference, Brown did not specify what the changes would be, and if they would be at a state or local level, but did add that the current metrics are “challenging for communities around the state, and my top priority is that we get our kids back into school safely,” she told OPB.

During Thursday’s meeting, Adrian Superintendent Kevin Purnell said he had heard rumors that the changes to the metrics could include breaking the COVID-19 cases down to zip codes. He said the 97901 zip code (which covers Adrian) has 2 cases of COVID-19.

Martinsen said he had heard similar things to Purnell, but has not gotten any promises that it will effect Adrian School District and that the changes to the metrics are still “two weeks out.”

“Ease up on the lawsuit, something’s coming,” Martinsen said is the general consensus he’s heard from the state. 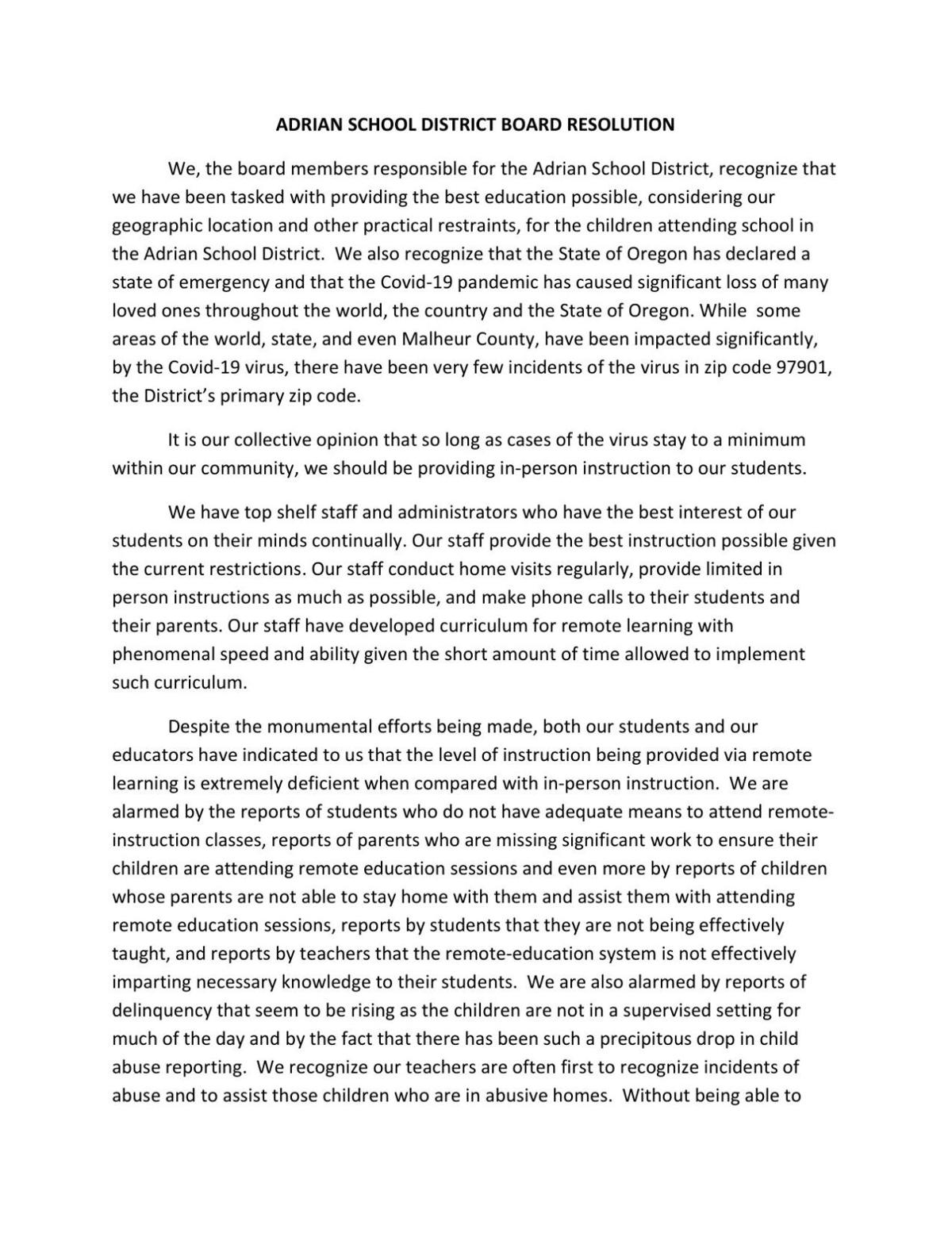 Unhappy that they still have to wait two weeks, the members of the School Board approved a resolution document, which was then signed by the board members and the superintendent. The document is ready to be filed in case the board is unhappy with the new guidance from the state.

The resolution states that the members of the Adrian School Board would like the state to allow them to return to full in-person instruction as long as the number of COVID-19 cases in Adrian stay low and the school adheres to the reopening blueprint that the school submitted late in the summer.

“Despite the monumental efforts being made, both our students and our educators have indicated to us that the level of instruction being provided via remote learning is extremely deficient when compared with in-person instruction,” the resolution reads.

The resolution claims that there are a lot of students who do not have “adequate means to attend remote instruction classes, reports of parents who are missing significant work to ensure their children are attending remote education sessions and even more by reports of children whose parents are not able to stay home with them and assist them with attending remote education sessions, reports by students that they are not being effectively taught, and reports by teachers that the remote-education system is not effectively imparting necessary knowledge to their students. We are also alarmed by reports of delinquency that seem to be rising as the children are not in a supervised setting for much of the day and by the fact that there has been such a precipitous drop in child abuse reporting.”

Calling the resolution a “necessity,” Speelmon was happy to have the document ready to go in case the school board needs it.

“I’m very happy to sign this tonight,” he said. “I don’t know what else we could put in the tool box. But I think they are hearing us. Us as a board and Adrian schools. They know it’s important.”

Martinsen said that the lawsuit itself is getting attention from the state, but added that if the board is unhappy with the results of the change in guidance, but if they file an injunction with the state, it could be well over a month before they see court.

One of the top complaints of not being in the classroom is the “irreparable harm” being done to the students of the district.

During the high school update, Kelly Tolman, a teacher at the high school, said 30% of the high school’s student body is currently failing a class, which is well above normal. Later in the meeting, Tolman added that more students are failing multiple classes.

“I’ve never been six weeks into the year with a kid who has a six percent and that’s the best grade in all his classes,” Tolman said.

Purnell added that there are also students who are failing classes worse than they normally are, something that the staff worries is due to there not being extracurriculars that they need to be academically eligible for. Purnell said there are about 20 students who are regularly coming into the school for limited in-person instruction, which leaves about 65 students who are not.

As of Thursday, there are still about 22 families in the school district who are experiencing connectivity issues, accounting for 36 students.

“I truly feel like we’re causing irreparable harm,” Speelmon said. “If the kids are finding out that education isn’t important because we’re not doing anything about it, then what do we do?”