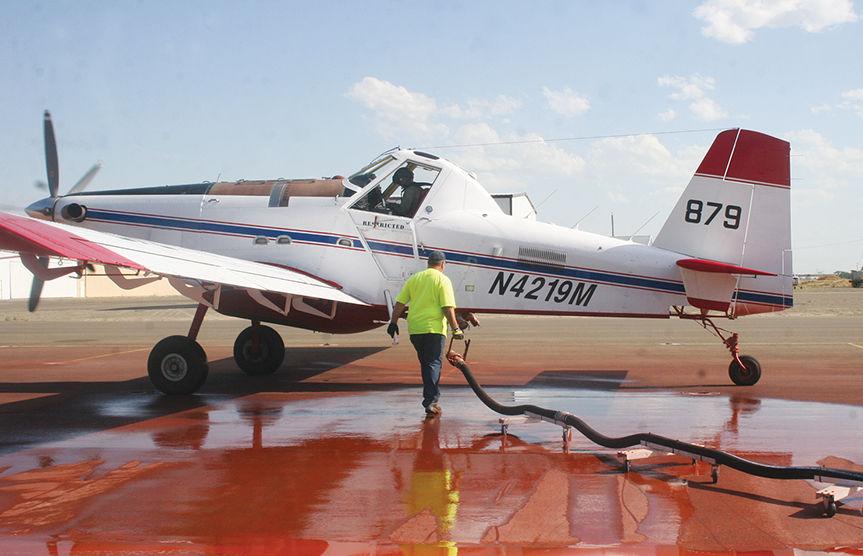 A BLM pilot waits to refuel at the Ontario airport in August of 2015. 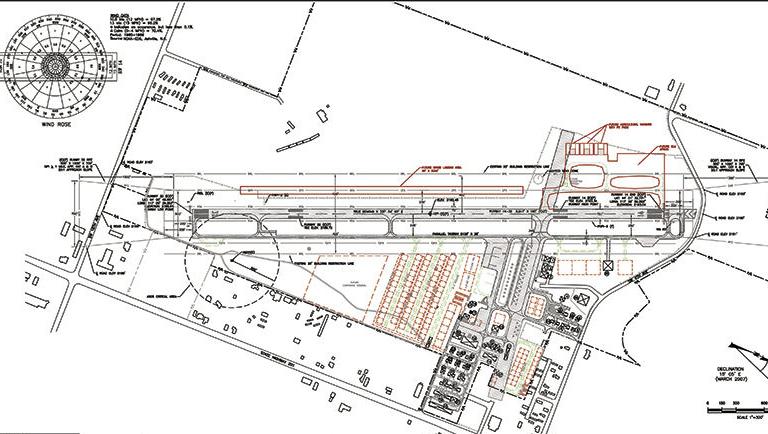 This map shows the preliminary layout of the proposed development to the northwest corner of Ontario Municipal Airport.

A BLM pilot waits to refuel at the Ontario airport in August of 2015.

This map shows the preliminary layout of the proposed development to the northwest corner of Ontario Municipal Airport.

ONTARIO — Will the Bureau of Land Management-Vale District uproot its helitack base at the Miller Memorial Airpark at Vale, the city in which its headquarters is located? The question came to light on Thursday night as the Ontario City Council took up the matter in discussing a resolution during its work session; however, no action was taken during the meeting.

City Manager Adam Brown presented the resolution to the council, which if passed, would enable the city to request the FAA to allow Ontario to make changes to its Airport Layout Plan in order to develop the northwest corner of the property.

The reason: so the Bureau of Land Management can consolidate and colocate its helitack operation with its BLM Air Tanker Base in Ontario to improve coordination, especially during firefighting seasons.

According to the resolution the BLM has a “desire for this project to be accelerated.” Furthermore, in the council packet, Brown states the agency contacted him on Tuesday saying they had “$2.5 million to put into the facility.”

He told the council that the project may actually end up costing more than that, but said that there are funding opportunities opening up soon in grant form from Eastern Oregon Border Board and Business Oregon.

The BLM prefers to provide funding up front than to have a 30-year lease on the project, the council packet further explains.

Brown said if the building was $4.5 million and the BLM covers $2.5 million, the city could finance the other $2 million through Business Oregon. The BLM, he added, would still pay a monthly lease after their initial investment.

“I don’t like the city being in the rental business,” said Mayor Riley Hill, saying that he was concerned the city was also potentially getting into a full-service lease, which he said from his own personal experience was “not the way to go.”

Brown reassured Hill the city wasn’t committing to that.

The plan would also relocate the agriculture spray operation to the northwest corner.

Mayor Riley Hill questioned whether there was room to expand or whether they were blocking themselves in, and Brown said the hope is to determine this right away, adding that he will be meeting today with the BLM and engineer.

One concern Brown pointed out to the council during the work session was that the FAA had pushed back over part of the design in which airplanes would have to taxi down almost the entire runway — which the FAA helped pay for improvements on — and then eventually cross it.

“The FAA is not really a big fan of that,” Brown told the council, adding that the agency indicated the city could go ahead and do that but it might make them ineligible for FAA funding on the runway each year.

This design would ideally change in the future, he says.

The city’s Airport Layout Plan, which has already been approved by the FAA is scheduled to last three more years; however, when it was done, Brown says, there was no knowledge of the BLM’s plan for Ontario.

According to the resolution there would be more to it than a new building in the northwest corner. The project would also include the development of infrastructure, including streets, water, sewer and fiber for aviation business development.

Brown told the Argus on Jan. 29 that Jessica Sherwood, unit aviation manager for Vale and Burns BLM, had written a proposal “a year or so ago saying [the BLM] wanted to have a stronger position in Ontario.

A request for comment from Sherwood regarding more details about the proposal was not returned by press time.

“Initially it was believed that this project would be five years out, but advocacy from our regional BLM officials have expedited the request,” reads information in the council’s agenda packet.

And now, Brown told the Argus, “we’re trying to hasten the plan.”

‘Going to need some management’

The big changes coming on with the BLM “are going to need some management,” Brown told the Argus, adding that the council is fully supportive of converting the part-time manager position at the airport to full time.

This will be brought up during upcoming budget discussions, he said, adding that the position would not be paid for through the Airport Fund, but rather “subsidized probably.”

A full-time manager has been needed at the airport for a couple of years Brown says, even preceding Treasure Valley Community College’s rapidly growing aviation program.

“But that just makes it all the more necessary.”

Brown says past managers have really been relegated to groundskeeping due to the part-time nature of their position, however, the city wants a new focus. This includes pursuing more grants, managing leases, following FAA rules, keeping runways clean and not just being a groundskeeper.

The news of the possible relocation of the BLM’s helitack in Vale to Ontario was a surprise to people in Vale.

“That’s the first I’ve heard of it,” said City Manager Katy Lamb, when told about the proposal in a phone interview this morning, adding that she was wondering whether the BLM was going behind the City of Vale without telling them they were looking around.

The BLM leases its helitack facilities at the Vale Airport for $236.03 per month, Lamb said. Those facilities don’t include a hangar but do include lodging for pilots.

Interestingly, Lamb noted, the BLM just entered a 20-year lease with the City of Vale in 2019.

Don Hodge, of Vale, said during a phone interview on Thursday afternoon that he was also unaware of any such plan. Hodge is a Malheur County Commissioner, and said the issue hadn’t come up in County Court nor has it arisen in meetings of the BLM’s Southeast Oregon Resource Advisory Council, on which he has served for about the last decade.

And because it hasn’t come before the county, Hodge said he could only speak personally on the matter rather than as a county official, however he sent a strong message.

Not only does the Vale Airport have the capacity for the fuel for helicopters, it has a building that houses the helitack operation, housing for pilots and, furthermore, Hodge mentioned, the Vale District BLM headquarters are in Vale.

Saying he understood the need for the airplane portion of the operation to be located in Ontario because the municipal airport’s runway could handle it, he still believes the helitack should stay in Vale.

Hodge, wanting to explore the matter further, said he planned to ask the district managers from Vale, Burns and Lakeview about it at the upcoming Southeast Oregon RAC meeting next week.

He said there was nothing officially that could likely be done to stop the BLM from moving its helitack operation, adding that it’s not like the court could force them to stay.

Hodge, who was born and raised in Vale, says there has been a BLM helicopter at the airport since he could remember, although he wasn’t sure when it became an official helitack operation.

He feels a move like that could have a hard impact on the community.

“All of Malheur County — Nyssa, Ontario, Vale — we can’t afford to have anything uprooted from these communities, especially things that have been here,” Hodge says, emphasizing that he personally didn’t want to “see anything taken away from any of our communities.”

Brown needs to back off and let Mayor Hill lead this city some, he's gonna insert his boot up his backside if he gets too sure of himself and tries to do everything. We elected Riley to be the mayor, bot Adam 'I am Ontario God' Brown.