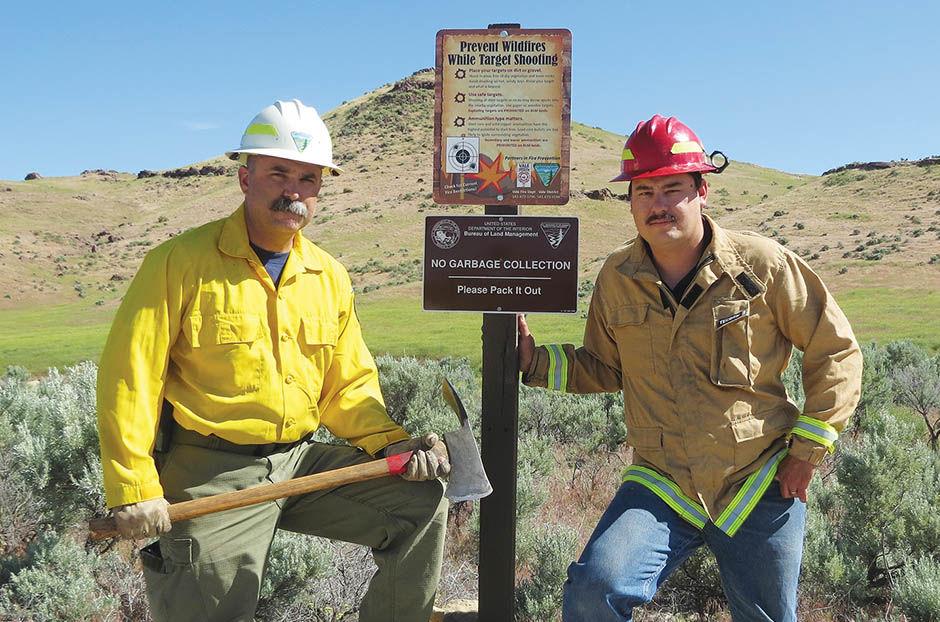 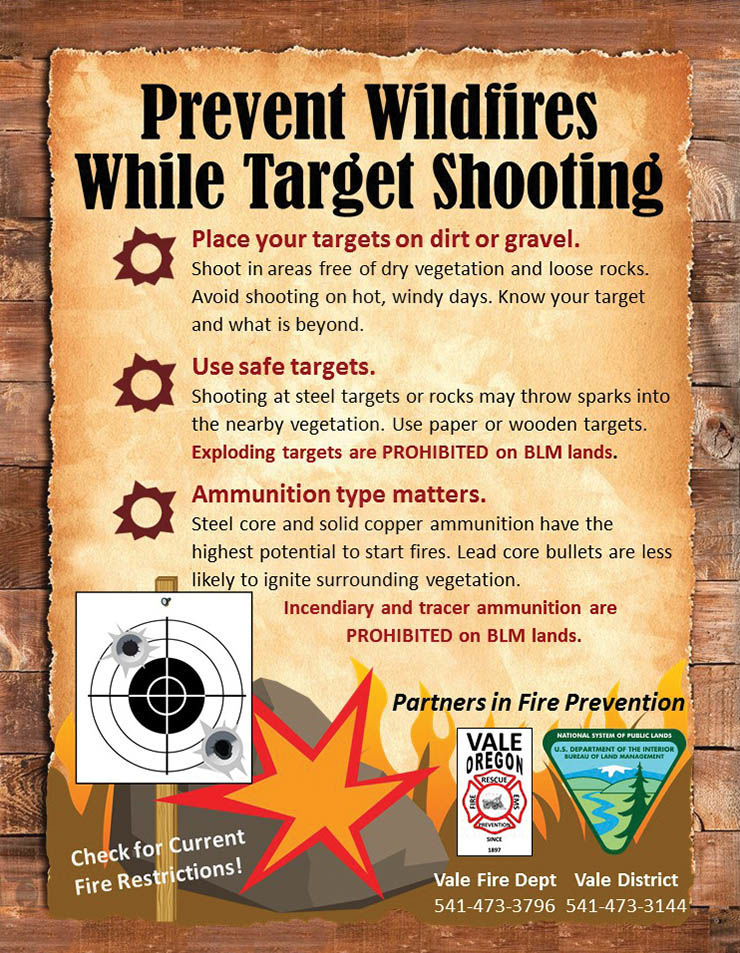 According to BLM fire management officials shooting-caused wildfires are on the rise on BLM lands across the west. The Vale District is not immune from this and has seen an increase not only in the recreational shooting sports on BLM lands, but also to wildfires caused by those activities.

“The BLM fully supports shooting as a valid use of public lands. We are not telling people they can’t shoot. If fact, we want you to enjoy your public lands. We just ask that you shoot safely and fire smart and pick up any trash from shooting activities. It’s about taking care of the land and avoiding unnecessary risks and costs to taxpayers if wildfire occur.” said Al Crouch, Vale BLM Fire Mitigation/ Education Specialist.

These signs are part of a larger on-going campaign initiated by the Vale District BLM in 2018 to provide funding assistance to help local communities in Malheur County reduce wildfire risk.

“These shooting signs are just part of a larger operation,” Crouch said. Vale BLM has been providing signing and public education material to local fire departments and Rangeland Fire Protection Associations across the county. As part of the campaign, Nyssa and Ontario Fire Departments received new fire danger signs in 2018. Vale Fire and Ambulance will get one in 2019.

“We have been working collaboratively with local fire departments, RFPAs, Oregon State Parks, Oregon Department of Fish and Wildlife, and local business, to name a few, on several projects,” Crouch said. “It’s all about working together. We have distributed public education materials all over the county. There are plans for additional advertising and other on-the-ground projects, all in an attempt to help educate and prepare the public, help mitigate or reduce wildfire risk, and hopefully prevent the next fire from even happening.”

Steel and cooper core ammunition are more likely to cause a spark than lead, but Crouch has seen all forms of ammunition start fires.

“Typically steel core and tracer ammunition is a leading culprit here but there are many scientific factors that determine weather a ricochet bullet will start a fire,” he said. “And contrary to what some manufacturers of exploding targets claim, they can and do start wildfires. The science proves it and exploding targets have been responsible for many fires throughout the west, including the Vale District BLM. It’s best to exercise all of these safe practices to increase your margin of safety. During the peak of the heat in mid July through early September we recommend shooting at an established shooting range. It’s just not worth the risk.”

When shooting on your public lands, come prepared:

• To help prevent starting a wildfire, know the weather and potential fire restrictions.

• Incendiary and tracer ammunition as well as exploding targets are prohibited on BLM lands.

• Avoid shooting on hot and dry or windy days.

• Shoot in areas free of dry vegetation and rocks.

• Shoot soft targets like wood, paper and cardboard instead of metal or rocks. Bullet impacts on hard objects are much more likely to cause a spark, which can lead to an ignition.

• Have a shovel and water and a fire extinguisher at close reach.