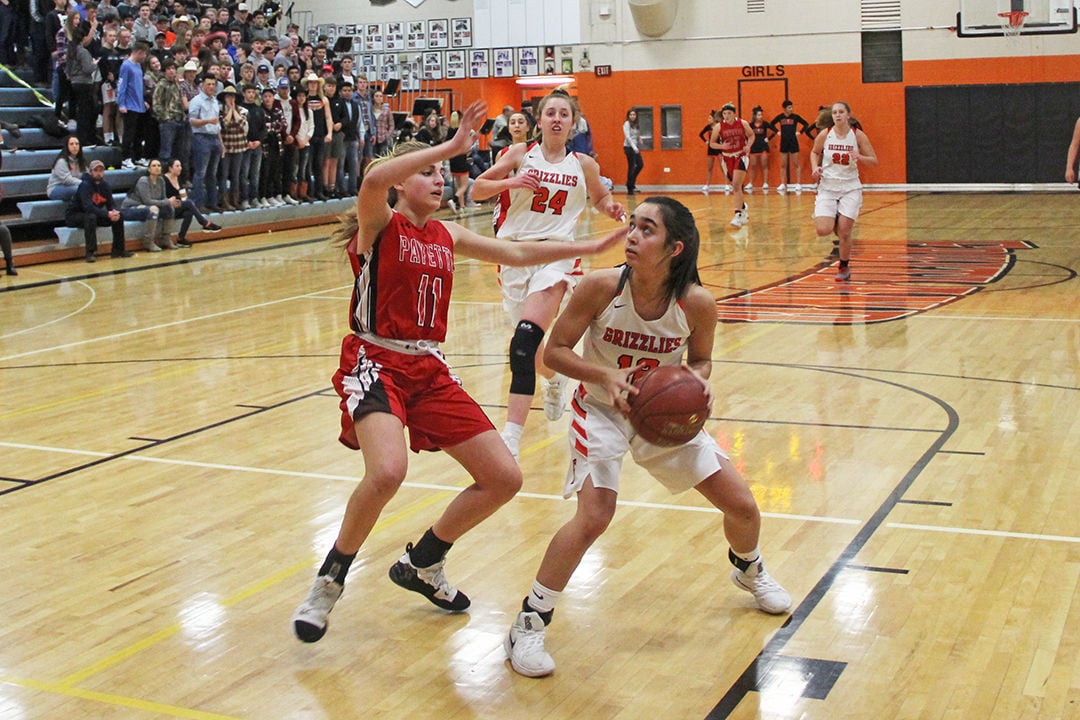 Fruitland’s Madi Fritts, right, holds the ball before hitting a layup as Payette’s Kenzy Spelman defends during the Grizzlies’ win over the Pirates on Jan. 16. 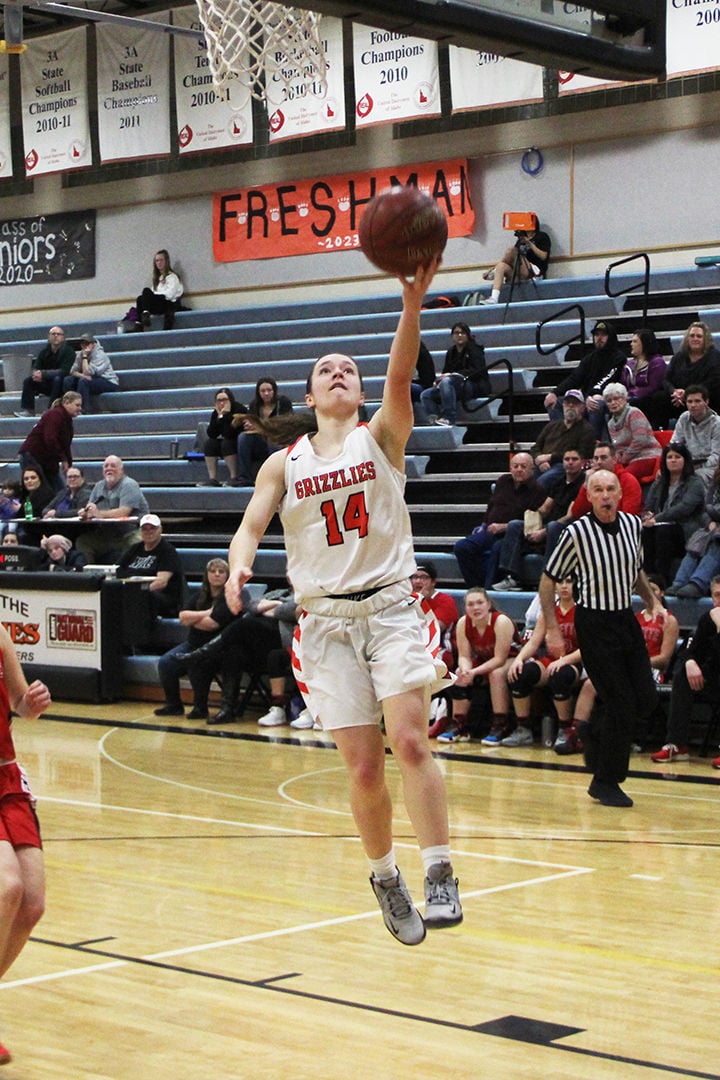 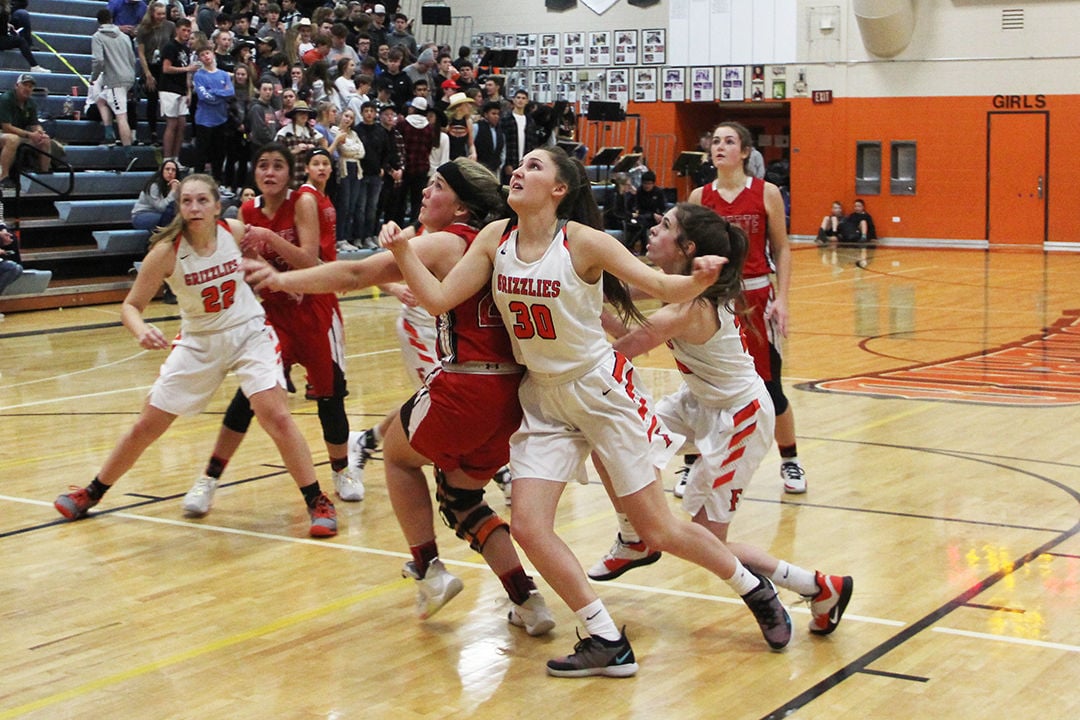 Fruitland’s Madi Fritts, right, holds the ball before hitting a layup as Payette’s Kenzy Spelman defends during the Grizzlies’ win over the Pirates on Jan. 16.

With a barrage of three-point shooting and stiff defense, the Fruitland girls basketball team has taken a firm grasp of the No. 2 seed in the Snake River Valley district following a 62-35 win over Payette on Thursday night.

After leading just 18-12 after one quarter, the Grizzlies (10-7, 3-1 SRV) clamped down on defense with a full court press that forced the Pirates to make tough passes, even just to inbound the ball.

The switch led to a 12-2 Fruitland run to open the second quarter (the Grizzlies would also open the third quarter on an 8-0 run).

The Grizzlies also started heating up from the arc in the second quarter, with Grace Johnson making two three pointers and Madi Fritts making one of her three first-half threes. Fritts would end the game with 14 points and Johnson with six.

While Fritts is no stranger to throwing up three-pointers en masse, Fruitland coach Amber Drollinger said she was happy to see Johnson finding success on her shot on Thursday.

“She was doing good tonight,” Drollinger said. “I think it’s just confidence with them. Her, Madi [Fritts] and even Payton [Fritts]. They’re hard workers and they’re in the gym all the time.”

Abby Smith led the Grizzlies in scoring with 16 points. After making just one of five field goals in the first quarter, Smith started being more precise with her offense, going five-for-five on field goals during the later three quarters (and also making five of six free throws on the night).

Thursday was also the first game back for senior guard Ellie Tenohlidek, who has suffered from both illness and an ankle injury this season. Drollinger said Tesnohlidek is a big boost to the Grizzlies as she keeps the pace up coming off the bench and is a good leader for the Grizzlies’ underclassmen.

“It’s fun to have that fire on the court,” Drollinger said. “She always goes hard.”

For the Grizzlies, the Pirates (7-10, 1-3 SRV) create an interesting matchup as Fruitland’s speedy guards are their strength while the Pirates are strong in the post with strong forwards Madisyn Collingwood, Yixcel Granados and Alicia Whinery.

Even though the Grizzlies were without Madi Scott on Thursday, Drollinger said she was happy with the way the Grizzlies battled in the paint.

“I thought we worked the ball into the post pretty well tonight,” Drollinger said.

Collingwood led the Pirates with 16 points.

While the Grizzlies now have a full one-game lead over Weiser for second in the SRV, Drollinger said she’s not going to be sleeping any easier. Drollinger said she knows that in order to get to the state tournament, the Grizzlies will have to face either Weiser or Payette at least two more times (once more in regular season, followed by potentially two more in the district tournament).

“Weiser and Payette are still great teams,” she said. “It’s nice to have wins, but its going to be a fight.”

The Grizzlies will host Parma on Saturday. The Pirates will play at Homedale on Tuesday.