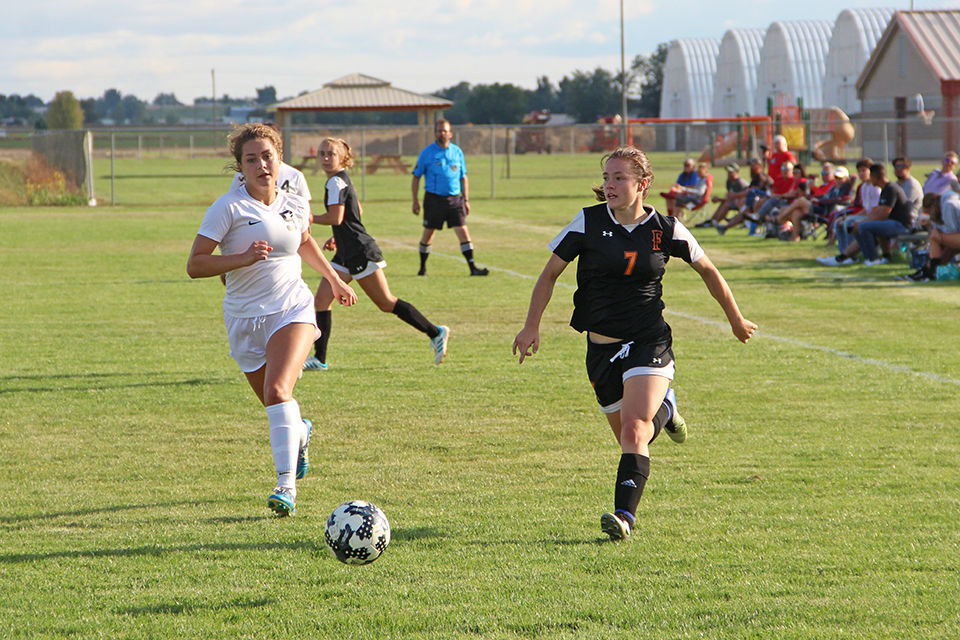 Fruitland’s Abby Smith (7) dribbles the ball towards the goal during the Grizzlies’ win over Payette on Sept. 10. 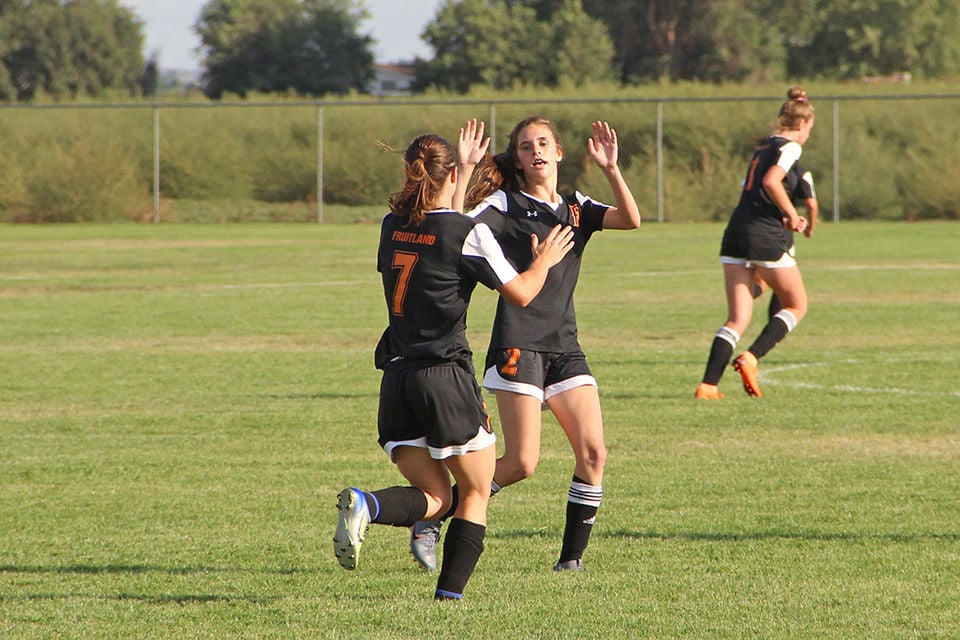 Fruitland’s Abbi Roubidoux, right, celebrates a goal with teammate Abby Smith. The duo are the Grizzlies’ leading goal-scorers this fall.

Fruitland’s Abby Smith (7) dribbles the ball towards the goal during the Grizzlies’ win over Payette on Sept. 10.

Fruitland’s Abbi Roubidoux, right, celebrates a goal with teammate Abby Smith. The duo are the Grizzlies’ leading goal-scorers this fall.

When people get stuck on the side of the road, many of them call AAA for assistance.

When the Fruitland girls soccer team is in a jam, it also reaches for the phone to call its Triple-A offense. But in this case, the Grizzlies’ aren’t looking for automobile help, they need the help of Abby Smith, Abbi Roubidoux and Ashtyn Frazier.

And that group came up big for the Grizzlies on Tuesday afternoon, as Fruitland used a last-minute surge to beat Snake River Valley rival Payette 5-3.

The Grizzlies held a 1-0 lead at halftime, and looked poised to cruise to a 2-0 win after Smith scored minutes into the second half.

But Payette came alive late in the game, with Chloe McCallum scoring at 67 minutes and Natalie Anderson and Yixcel Granados both scoring in the final 10 minutes. Granados’ goal gave the Pirates a 3-2 lead with just three minutes remaining.

But with their backs against the wall, the Grizzlies’ offense took over. Smith took the ball herself to the box and scoring on an unassisted goal to tie it at 3-3 just a minute later. As the Payette defense was trying to figure out what had happened, Roubidoux scored in the same fashion. At 80 minutes, Smith scored on a free kick off a Payette foul just outside the box, sealing the contest.

The offensive surge in the final minutes is something that Fruitland coach Joal Herrera said he’s seen a lot of from the Grizzlies this fall, but they need to be able to get into that mindset earlier in games.

“We keep telling them, there’s a lot of potential on this team,” Herrera said. “But they just hold it in. The same thing happened in McCall.”

The Grizzlies’ lone loss on the season came on Thursday, with the Grizzlies falling 6-5 to the Vandals.

“They get nervous,” Herrera said. “And today we were nervous a bit playing Payette for the first time this year. ”

When it comes to the Grizzlies, their offense has been on fire this fall, averaging 5.25 points per game through four games. Most of that offensive production comes from Smith, Roubidoux and Frazier, who make up the offensive triangle that the Grizzlies are throwing at their opponents. Smith scored four of the Grizzlies’ five goals on Tuesday.

Herrera said the Triple-A offense’s speed is undeniable, but they also are able to create plays by being patient and playing smart.

“There’s no doubt that they are fast on the sprint,” Herrera said. “But first, this. Try to play team soccer. Move the ball in space and get more comfortable.”

But what’s gotten Herrera most excited about this fall is that there is so much more room for growth with the Grizzlies. Frazier is a sophomore and Roubidoux is a freshman.

“There’s lots of room for growth,” Herrera said. “I’m nowhere near content with where we are at right now. By the time we are at districts I hope we’re somewhere where we want to be.”

“She understood that there’s a lot of things that we’re doing that aren’t necessarily to her benefit, but to the benefit of the younger girls,” Herrera said. “She’s a real role model in that sense. It’s great to have a senior with that much ability willing to help them out.”