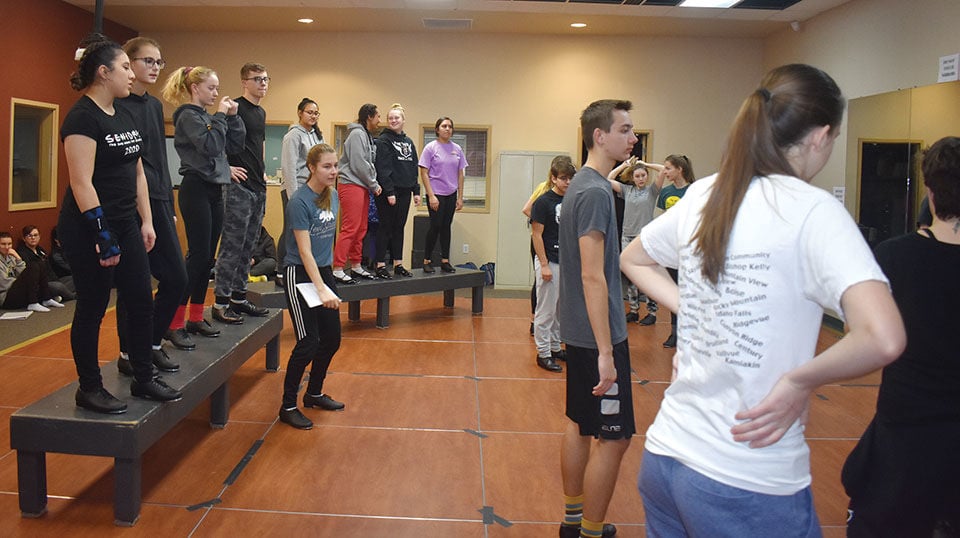 Fruitland High School’s Musical Theater students practice a number during the morning of Jan. 16. The class will present Disney’s “Newsies: The Musical” at Four Rivers Cultural Center on Feb. 6, 7 and 8. 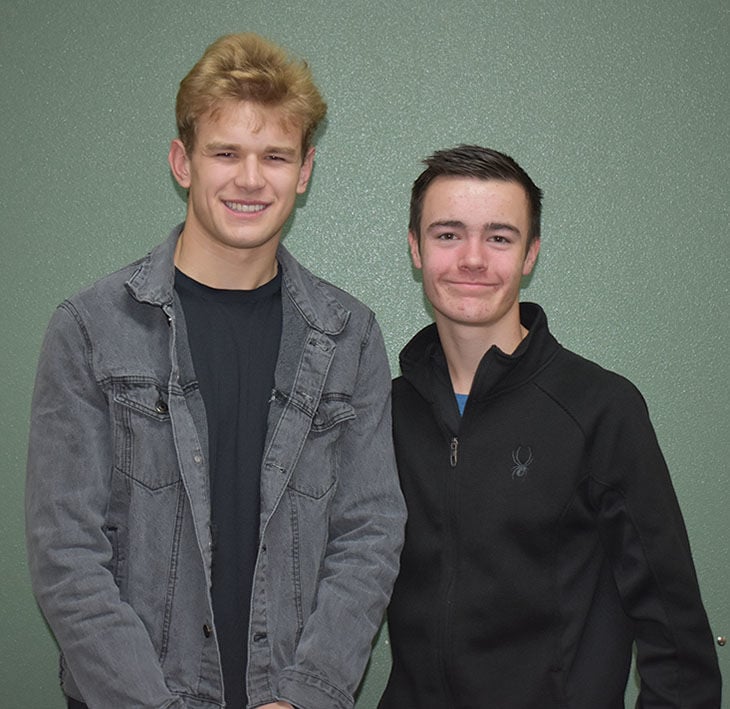 Fruitland High School students Lex Anderson and Jackson Lawrence stop the presses on practicing for the school’s production of Disney’s “Newsies: the Musical” for this press photo on Jan. 16. Anderson plays Jack Kelly in the play, while Lawrence runs the lighting cues.

Fruitland High School’s Musical Theater students practice a number during the morning of Jan. 16. The class will present Disney’s “Newsies: The Musical” at Four Rivers Cultural Center on Feb. 6, 7 and 8.

Fruitland High School students Lex Anderson and Jackson Lawrence stop the presses on practicing for the school’s production of Disney’s “Newsies: the Musical” for this press photo on Jan. 16. Anderson plays Jack Kelly in the play, while Lawrence runs the lighting cues.

Extra! Extra! Read all about it: Fruitland High School Musical Theater students bring Disney musical to life! They’ll be doing so at the Four Rivers Cultural Center on Feb. 6, 7 and 8, performing “Newsies The Musical.”

The musical is based on the 1992 Walt Disney musical feature film “Newsies,” which in turn was inspired by the real-life Newsboys Strike of 1899 in New York City.

A total of 47 students spend their mornings preparing for the play, as other people are waking up to their local news.

Director Sterling Blackwell says his students have worked as hard to bring this to life, as the paper boys that inspired the musical worked.

Blackwell notes that the Newsboys Strike is one of several incidents that led to today’s child labor laws.

“It kind of was … what started that process, it’s a musical based on that story that really shows the empowerment of students and little kids and their rights, too,” said Blackwell.

According to Blackwell, “a lot of pieces” go into a production like this one; Learning the music, choreography for each dance number, tieing scenes together with blocking (coordinating actors’ movements on the stage), building sets, getting costumes made, creating scenery, and for this play creating digital projections that tie into the scene.

The play is being held at Four Rivers, as Fruitland High presently has no facility large enough for such a play.

Much like the paper boys wanted their voices heard, senior Lex Anderson who plays lead character Jack Kelly, says he’s looking to get his voice heard.

Anderson described the role as very stressful, but very exciting at the same time.

Behind the scenes, freshman Jackson Lawrence is preparing to light up the scene as technical director. He admits prepwork is tough, with their host venue lying across the river.

“When you’re doing lighting, you have to make sure that everyone’s gonna stay entertained and that the lighting is gonna be fun and energetic and it’s gonna go along with what the actors are doing … I spend multiple hours working on it and making sure it’s gonna work out. It gets pretty hard and we get through it.”

Both say they’re looking forward to opening night, in particular.

Jill Stephens, a volunteer with the musical theater program, was eager to sing the students’ praises.

“The students are working super hard and they are super excited to perform the show,” she noted. “Take every opportunity to come and support them ‘cause they work hard and they deserve a full house audience.”

“How many kids come early to be a part of this?” Haro asked rhetorically. “We couldn’t have better people, with Jill and Sterling. They’re all so amazing and wonderful. We are so fortunate to have this program for these kids, because it’s all about the kids but you can’t do it without the adults.”

Blackwell notes that Haro “voluntold” her husband to help him with the production of the play.

Corey Evan is a reporter at the Independent-Enterprise and Argus Observer. He can be reached at (208) 642-5258 or by emailing coreye@argusobserver.com. To comment on this story, go to www.argusobserver.com.