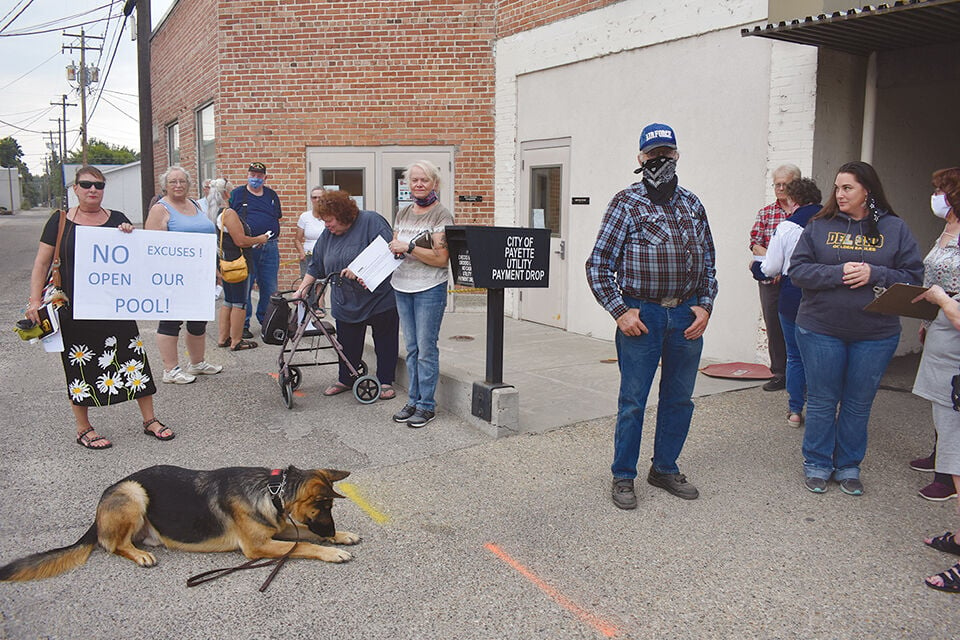 Concerned citizens gather outside Payette City Hall on Aug. 18. Several of these citizens held signs such as the one pictured, while others addressed the Council expressing frustration with delays in reopening the Payette Public Pool. 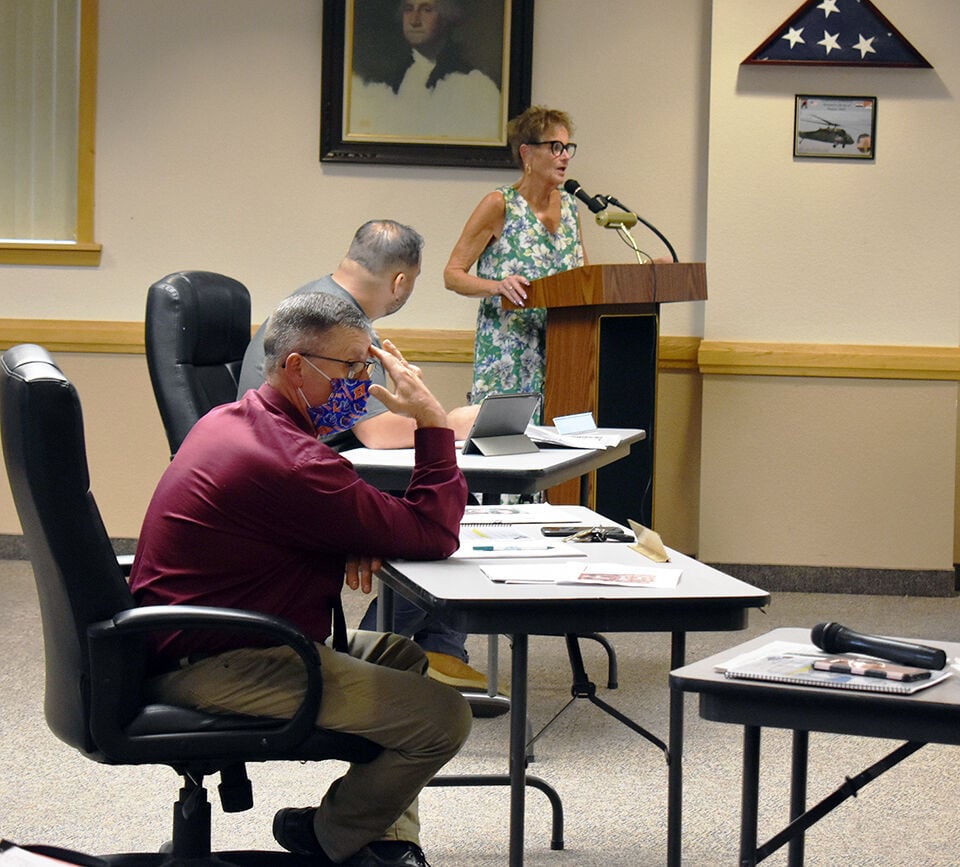 Ontario resident Ann Fitch Schiemer addresses the Payette City Council about the current pool closure, as well as its condition. Schiemer managed the pool prior to 1985.

Concerned citizens gather outside Payette City Hall on Aug. 18. Several of these citizens held signs such as the one pictured, while others addressed the Council expressing frustration with delays in reopening the Payette Public Pool.

Ontario resident Ann Fitch Schiemer addresses the Payette City Council about the current pool closure, as well as its condition. Schiemer managed the pool prior to 1985.

PAYETTE — A crowd of frequent swimmers inundated the Payette City Council during its Aug. 17 regular meeting, pleading for them to reopen the Payette Public Pool. Several dozen people were present outside city hall, taking turns entering council chambers to share their concerns during the citizens comments portion of the meeting due to limited capacity because of COVID-19.

Following is a sample of the complaints brought before the council.

Payette resident Linda Hartman brought up an email she sent to city officials, asking for a vote to reopen the pool.

“Everybody knows there’s pools open everywhere, depending on what the guidelines are I’m sure,” said Hartman in asking for a vote. “This is the only pool in the whole west end of the Treasure Valley that’s year-round.”

A former manager at the pool until late 1984, Ontario resident Ann Fitch Schiemer expressed displeasure with the condition of the facility today.

“I managed it under the guardianship of the Payette City Council, but also I was a department head and manager; I set my own budget, and we made money,” said Schiemer. “The pool was maintained. They didn’t put a lot of money into it, but we were allowed to maintain it. Now it’s deteriorated, it has not been maintained, and that’s a sad thing. It needs to be run as a business.”

Resident Peggy Roach expressed frustration with the Council not having planned for a manager last fiscal year.

“We haven’t had a pool manager in over a year. So many people volunteer but you guys said you don’t want volunteers,” said Roach. “The world is run by volunteers; The city of Payette has a lot of volunteers, and all of us volunteered to do cleaning, we volunteered to donate soaps, sanitary soap … to take first aid, CPR, we’ve done everything to open our pool.”

In response to these citizens’ complaints, Mayor Jeff Williams reminded those present of required protocols before the pool may reopen.

“In [the 2020-21] budget, there is funds to hire a pool manager. And we have to go through the steps of approving the budget … You have to do things the way that the state says that you have to do them.”

One major hurdle to reopening the pool is the hiring of a pool manager and training lifeguards, according to Williams; He cited Southwest District Health guidelines, which call for the city to hire a manager to ensure COVID-19 sanitation and physical distancing requirements are met. Due to a lack of appropriation in the fiscal year 2019-20 budget, Williams has been acting as the de facto pool manager.

He admits it’s not an ideal situation.

“Am I a ‘pool’ manager? Heck no. But that’s the job of management is to put people in the right place, and have we been able to do everything perfectly? Heck no! But that’s some of the challenges that we have.”

Williams reassured those present that the Council intends to reopen the pool, but because money was not set aside for a pool manager in the current fiscal year, the pool reopening will have to wait for the next fiscal year.

“All is not good in ‘waterland,’ if that’s a decent term,” said Williams. “It’s kind of a moving target. I don’t think there’s a single person that’s on this council, nor myself, that says ‘we don’t want a pool…’ But we have our hands tied.”

Despite not specifically being allocated to a manager position, Council Lori Steiniker noted unused monies in the current budget which proved the city could afford to hire one again.

“We budgeted $110,000 for lifeguards and we’ve only used 27% of that. We’ve also only used 53% of the salary which has been budgeted” for pool employees, said Steiniker. “I believe our pool needs to be opened, but with the caveat not opening in ‘green.’”

Steiniker expressed limiting opening the pool to lap swimmers and aerobics patrons, due to Payette County being under a ‘red’ health alert from Southwest District Health.

Regardless of whether the monies for a pool manager are approved at the Council’s Sept. 8 meeting, Williams stated there’s no guarantee they’ll have a manager ready to go by the start of the next fiscal year.

“Realistically, will we be able to start with a pool manager on Oct. 1? I doubt it,” he concluded.

As this was not an action item on the agenda for this meeting, no further action has been taken at this time.

All Payette City Councilors, including Mayor Jeff Williams, were present at the Aug. 17 regular meeting.