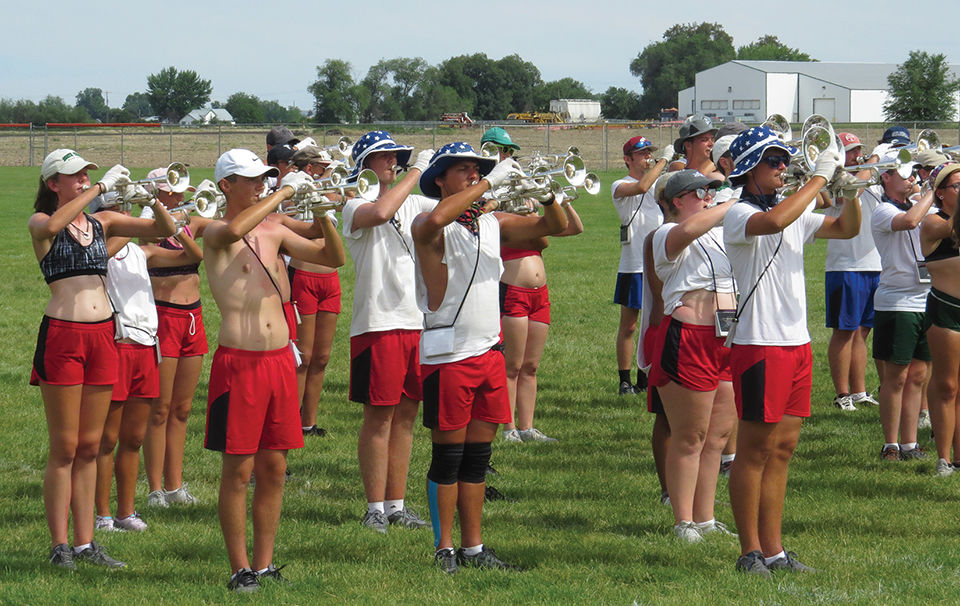 A Fruitland Grizzlies band member is having a summer he’s certain to always remember, an adventure that was sparked by attending a one-day educational clinic in Nampa late last month.

William McComb, an incoming junior who has been avidly playing trumpet in Fruitland bands since the sixth grade, has joined the Troopers Drum & Bugle Corps for the world class group’s summer tour.

On Father’s Day on the Fruitland High School football field, the group gave a free evening performance for the public, debuting the show the Troopers would immediately be taking on the road.

Already the Troopers have begun their extensive summer travels in earnest, starting with a bus ride to Clovis, California, the first of the group’s six scheduled performance stops in the Golden State before continuing on to Mesa, Arizona, on July 1. After that, the schedule becomes truly dizzying with stops in 18 different cities in 14 different states, before it all wraps up with the Drum Corps International championships, a three-day event in Indianapolis, Indiana, Aug. 8-10.

McComb was busy with all-day practices with the Troopers in Fruitland as information for this article was being gathered, but his father, Bruce McComb, was available to answer questions, as was Fruitland Band Director Joel Williams, a past performer with the Troopers who later joined the corps’ staff.

Bruce McComb said William, 15, is a devoted school band performer, but William also enjoys playing his trumpet when it’s not band season. Bruce and wife Carissa McComb, William’s mother, confront no struggles in getting the son to practice.

“He definitely practices regularly. … We don’t require a time. It’s not like it’s a set schedule or anything like that. He just pulls [the trumpet] out on his own,” the father said.

Band director Williams said William was one of 10 Grizzlies band members who attended last month’s clinic in Nampa. Williams described the Troopers’ clinic as a “drum corps spring camp, so the kids could see what it was like to be in drum corps for a day, and kind of have their instructional staff show them a few cool things.”

“William was like, wow, this is really cool. I want to push this further and see if I can get involved,” described Williams.

Bruce McComb said his son jumped at an announced opportunity for trumpeters to try out for the group.

“They had mentioned at the clinic that they had a few openings in different areas … maybe two trumpet spots that were available. But it was by audition, so they had to audition initially, and then determine if they were able to perform at their level.”

Bruce McComb said William also “met with the leadership team” before going to a Troopers rehearsal. Shortly after that the young trumpeter was offered a spot with the group.

The commitment, which was immediate, has involved daily rehearsals consuming most of the daylight hours.

“They’re out there all day, from eight o’clock in the morning until nine o’clock at night, with a couple of breaks for meals and lots of water, but they are going, going, going,” said Williams last week.

The McCombs live in Fruitland and the Troopers were practicing in Fruitland, but Bruce McComb said last week that it seemed as if William already had, in a sense, embarked on his summer-long sojourn.

“When they join, this is a team effort, and so now that he’s signed up with them, he actually sleeps, eats, drinks, practices, everything with them. We literally live across the highway from the school, and he stays over there with them,” Bruce said.

Bruce McComb expressed admiration for the great dedication he perceives in the performers and all of the staff.

“All of these kids, the distance they cover, they do a lot of traveling at night, and so they’re either sleeping on that bus when it’s traveling from one location to another, or schools offer them up a place to stay, … almost like camping on their gym floors. So there’s definitely a high level of dedication from everybody on that organization, including the staff. I think altogether there are somewhere around two hundred to two hundred and ten when you include their staff, and they move this organization all around the nation like this throughout the summer months,” the father said.

Although there’s a drum and bugle corps competition in the Treasure Valley nearly every summer, Williams said, this year marked the first time that a Drum Corps International world class corps has ever done “what they call spring training here in the Treasure Valley.” Spring training, he explained, begins around Memorial Day. “They have about three weeks where they learn their show and perfect their craft, before they take it out on the road and start touring around the country.”

The Troopers 2019 spring training effectively concluded with Sunday evening’s free concert, which showcased the performance they will be repeating in more than 20 different cities. The debut performance also afforded the first public exposure of the Troopers’ new uniform, which changes every year.

“This is an international organization. There are eight kids from Japan in this drum corps. One kid from England.” As for players from the U.S., “they come from all across the country,” Williams said.

Williams said he was in his freshman year as a music major at Boise State University when he joined the Troopers, touring with them both that year, at age 19, and as a sophomore at age 20.

Since becoming Fruitland’s band director in 1995, Williams has encouraged a number of his more talented students over the years to try out for the Troopers tour.

“I started recruiting kids into the Troopers in nineteen ninety-six, and we sent Fruitland kids to the Troopers all the way through two thousand and thirteen. And now we’re picking it up again, with Will.”

Troopers develop skills that can benefit the other players back home.

“I know If we can get kids to go do this, they’re going to bring this … tremendous experience and professionalism that they’re gaining back to the high school marching band experience, and just help everybody else get better,” Williams explained.

“This is a really motivated, talented young man. He’s a tough kid, and it’s going to be a great experience for him,” Williams said.