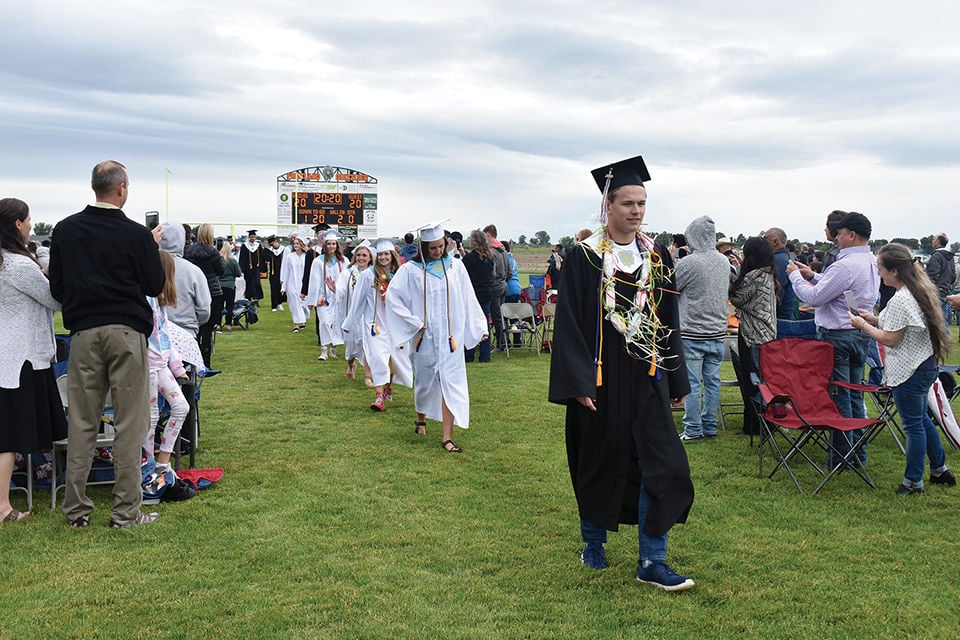 Fruitland High School’s Class of 2020 graduates enter the football field on Monday for their commencement, with the scoreboard set to 20-20 in their honor. 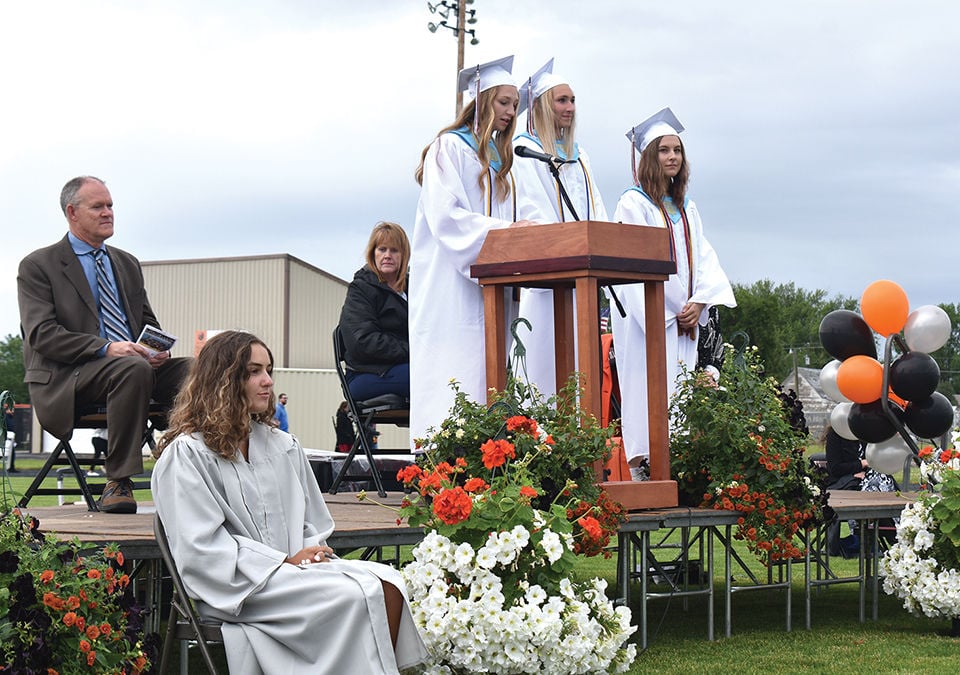 The class of 2020 had 17 valedictorians. Pictured are co-valedictorians Addison Concidine, Katelyn Hardy and Hailey Hershey. 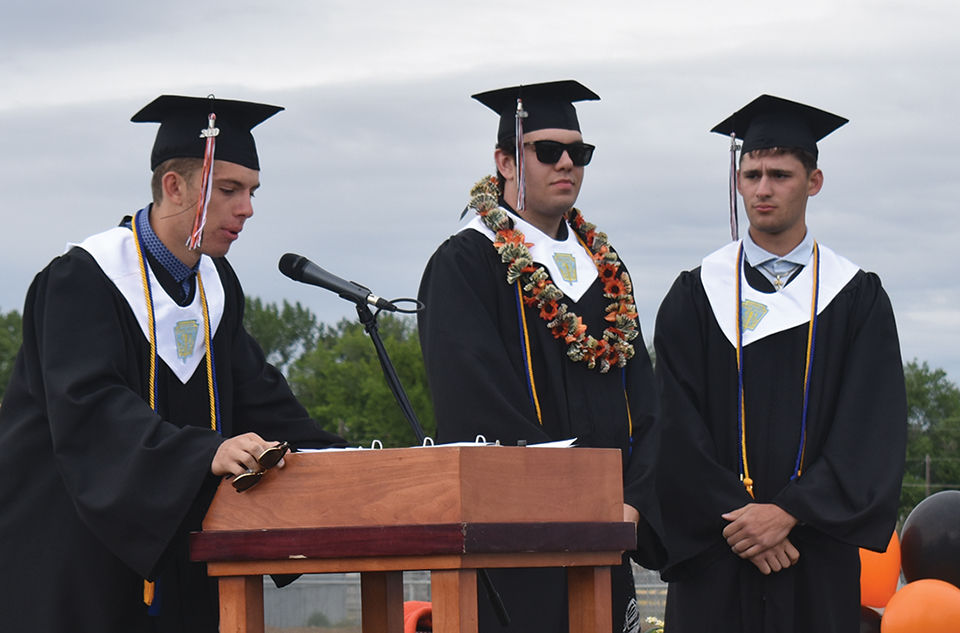 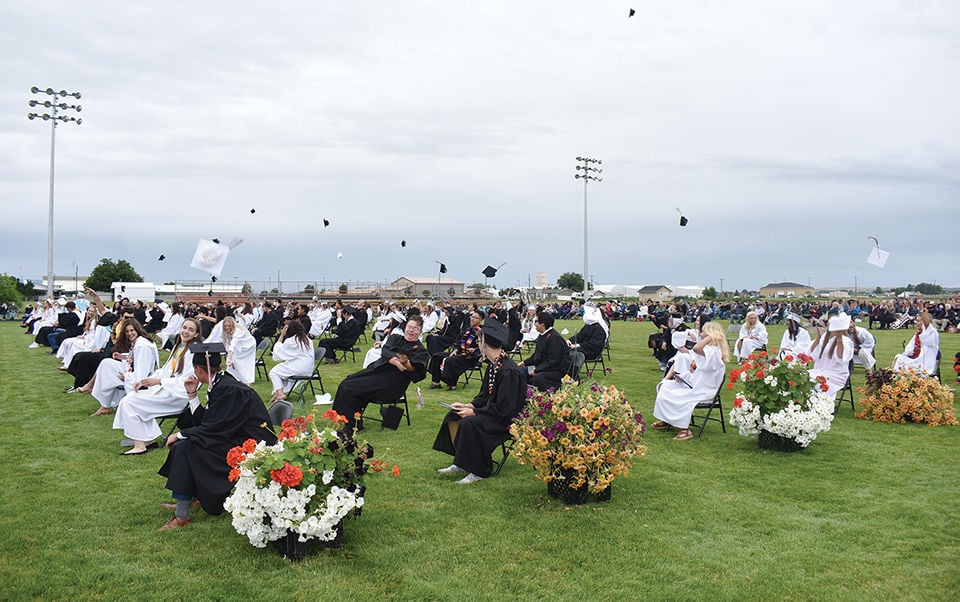 The class of 2020 jumped the gun on the tossing of caps into a cloudy sky, at the end of their ceremony.

Fruitland High School’s Class of 2020 graduates enter the football field on Monday for their commencement, with the scoreboard set to 20-20 in their honor.

The class of 2020 had 17 valedictorians. Pictured are co-valedictorians Addison Concidine, Katelyn Hardy and Hailey Hershey.

The class of 2020 jumped the gun on the tossing of caps into a cloudy sky, at the end of their ceremony.

Even as other school districts in the area took to alternative means of celebrating the class of 2020 due to novel coronavirus COVID-19, the Fruitland School District stuck to the idea of a traditional commencement ceremony for its high school’s graduating class, opting to try to postpone until stage 4 of reopening.

With Idaho having entered stage 4 on June 13, the wait paid off.

The ceremony was held on the football field at Fruitland High on Monday — the first time the ceremony had been held on campus since 2002. The scoreboard was set to 20-20 to honor the graduates.

The weather was a little patchy, but it didn’t deter friends and family from watching graduates as they walked the stage. Many did, however, have to bring their own folding chairs to sit around the track as the bleachers were off-limits for this ceremony to encourage social distancing.

Superintendent Teresa Fabricius greeted these 104 graduates and those celebrating them as the ceremony began. This was Fabricius’ last commencement before retiring.

“We had to get through a lot of obstacles as you know; we made it into stage four [of Idaho’s reopening plan] in the nick of time, we had to get a plan approved by the Southwest District Health department, we thank them for helping us,” she said. “It took a tremendous amount of work on the part of the high school staff, our students and our senior parents.”

To facilitate their speeches, these valedictorians spoke in groups. Following are examples of their remarks:

“Our class is unlike any other, not only because of what we are facing in the world right now but because of the bond that has developed over many early morning practices, late night Facetime calls, trying to figure out homework, classroom court cases, debates and competitive review games within the class,” said Concidine.

Hardy remarked about the resilience of her classmates:

“Life took us down an unexpected path and we continued moving forward; What a gift we have been given at such a young age to learn resilience and strength in a time of great difficulty.”

Connell recounted the challenges that the class of 2020 faced, even before the pandemic hit.

“But there were also the the good times, when we cried and celebrated,” added Anderson. “We’ve been to nationals for FFA, district three for band, state for sports, performances for musical theater and achieved passing grades in Mr. Carter’s class.”

“This class is a class of survivors,” said Berry. “We were born in the 9-11 era and now we’re graduating  during the COVID-19 pandemic. We’ve continued to survive the countless late nights, studying vocabulary words, fighting through sickness with ibuprofen so we wouldn’t have to take finals,  and enduring the ever-increasing high school drama.”

Smith made a point to thank teachers and staff, his classmates and his coaches for sharing skills and knowledge with the class.

“Not only have our coaches led us to winning seasons, district and state championships … but they have led us to greater heights,” said Smith.

They had one salutatorian: Anthony McComb.

McComb added his remarks about the things this class went through to make it here.

“This class has earned several state and district sport titles, because the ‘Honorable Judge Ziegler’ has wisely taught us here at Fruitland academics are number one and sports are number two.”

Teacher Larry Ziegler told the class that while he and his fellow teachers lamented not having more time to teach them in person, he expressed gratitude to the class to be able to make a connection to them.

“I watched you come through the time you were little kids, in Idaho history programs and flag football and little league baseball. And I’ve watched four or five of you bite the head off a fish before, if I recall,” said Ziegler. “It’s already been mentioned, look at all the obstacles you’ve overcome in one giant detour, but we’re finally here. And I just have one question: Did anybody figure out what the heck happened?”

A tradition at Fruitland High is the rose ceremony, where each graduate is given two roses to present to the two people in their lives who made the biggest impact. While many parents and guardians received roses, some teachers received them too, including Fabricius.

After the graduates walked the stage to receive the holders for their diplomas, Ellie Tesnohlidek led the tassel ceremony, and while the graduates jumped the gun on tossing their caps in the air, principal Marci Haro certified and presented the graduating Class of 2020.

Senior awards were presented at the ceremony. A list follows.