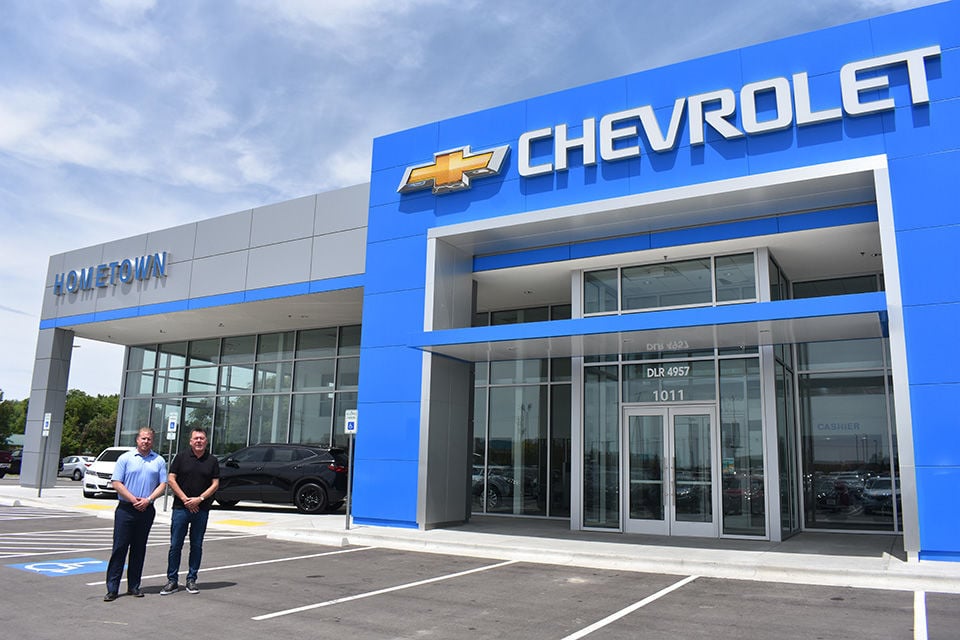 Steve Dominguez, right, with son Nick Dominguez, stand together outside the newly-opened Steve’s Hometown Chevrolet-Buick-GMC dealership in Fruitland on June 11. Steve Dominguez said the facility fulfills an obligation to General Motors to upgrade the dealership, previously located in Payette. 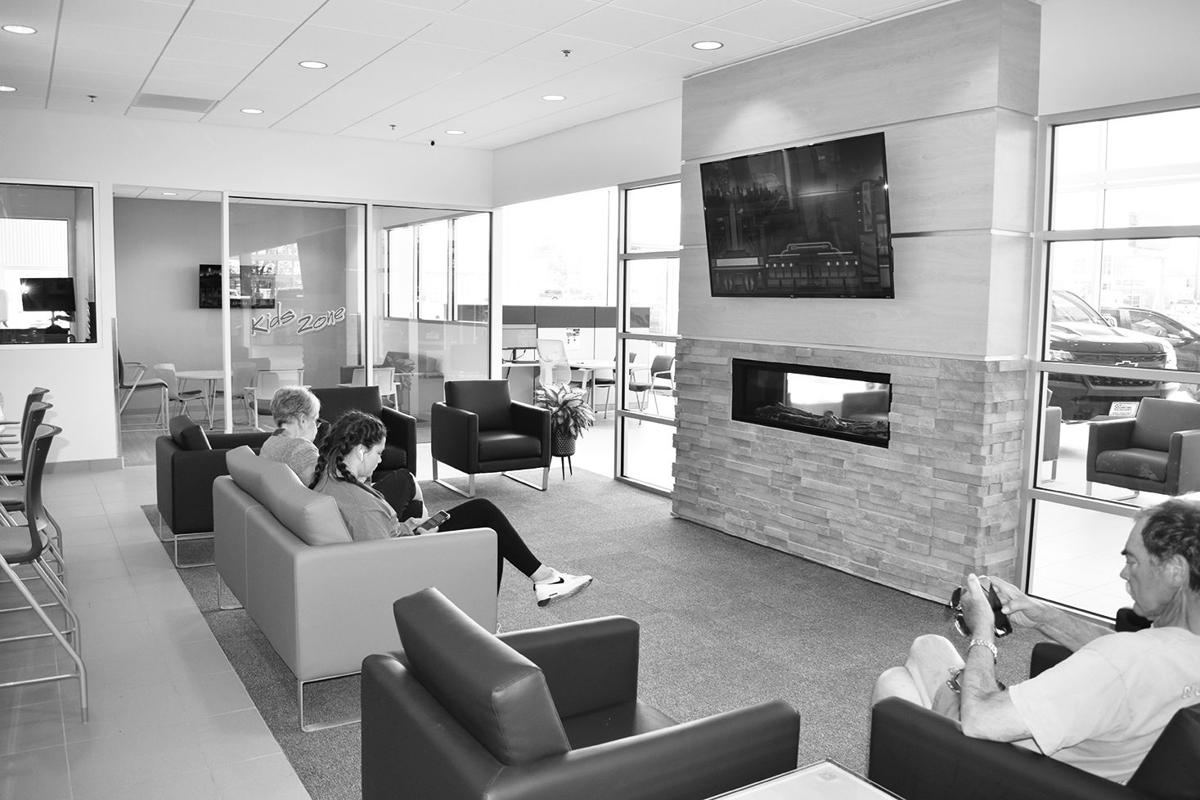 Customers await vehicle servicing at Hometown Chevrolet-Buick-GMC on June 11. The waiting area is divided into two sections, including one for kids. 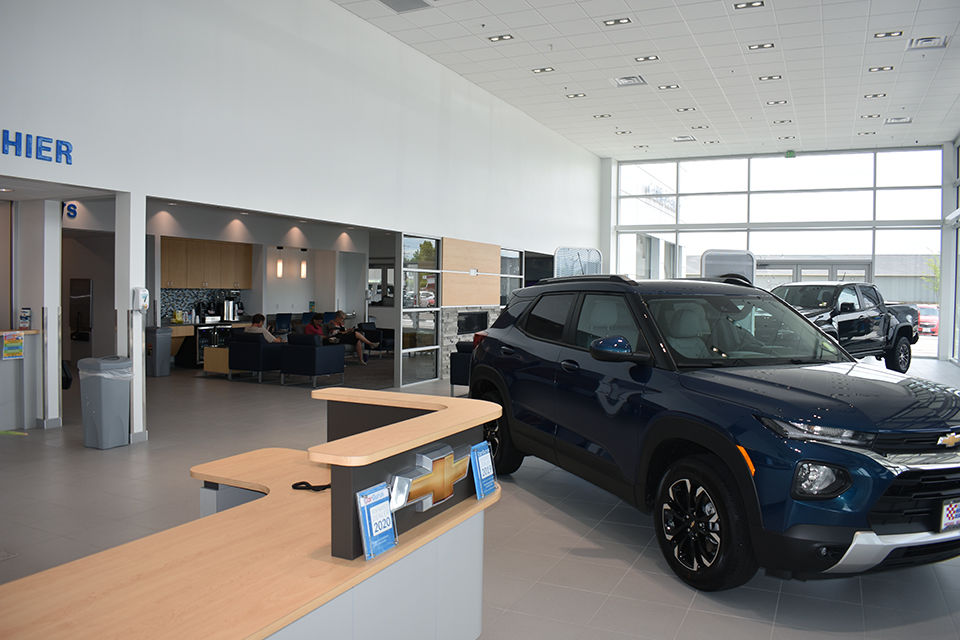 Up to seven General Motors models can be displayed in the new, larger showroom at Hometown Chevrolet-Buick-GMC in Fruitland. 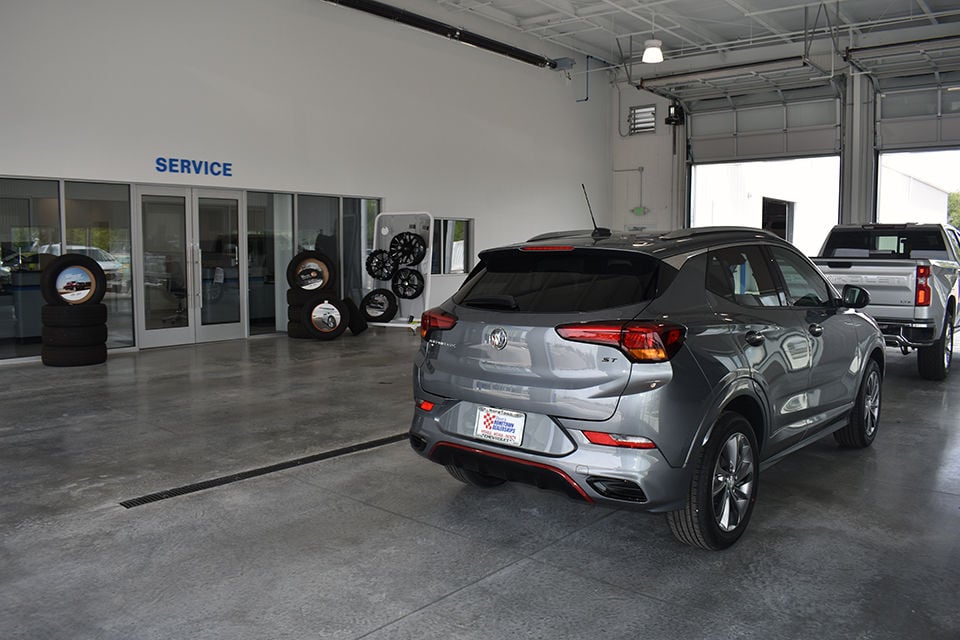 Steve Dominguez, right, with son Nick Dominguez, stand together outside the newly-opened Steve’s Hometown Chevrolet-Buick-GMC dealership in Fruitland on June 11. Steve Dominguez said the facility fulfills an obligation to General Motors to upgrade the dealership, previously located in Payette.

Customers await vehicle servicing at Hometown Chevrolet-Buick-GMC on June 11. The waiting area is divided into two sections, including one for kids.

Up to seven General Motors models can be displayed in the new, larger showroom at Hometown Chevrolet-Buick-GMC in Fruitland.

FRUITLAND - In 2016, Steve Dominguez, owner of Hometown Dealerships, acquired the Hanigan Chevrolet dealership in Payette from Mike Hanigan, whose family owned it for more than 60 years. Come 2020, the dealership has a brand new facility, and a new home … in Fruitland.

Owner Steve Dominguez met with the newspaper on July 11 to discuss what went into the planning and opening of this new facility.

“When we took it over, I think Mike Hanigan knew at that point when they sold the dealership that they were going to have to modernize and build a new facility to get  where they needed to go forward for their vision, for the community and for what General Motors required,” said Dominguez. “They just didn’t feel that was where they wanted to go.”

As part of the transaction, Dominguez was obligated by General Motors to either relocate or upgrade the dealership. Given the age and size of the Payette location, he opted for the former.

“When we acquired the General Motors facility from Hanigan four years ago, actually this month, we made a commitment to General Motors that we would build a new facility,” said Dominguez. “We did a market study to find out where the best area for traffic would be; There’s approximately … nine thousand General Motors owners in our market area, so we service all of those customers, not just ones from Payette. This location was the one, after we did our market study, that we found would be the best area for the dealership.”

Dominguez said such commitments to modernize are common among car dealership acquisitions, in exchange for support from the manufacturer.

“You either have to do a remodel where you’re at, or do a new build,” he said. “The building where we were at in downtown Payette had served its purpose, it had been there for sixty-some years. But as you know, time passed by that area and it became kind of downtown where there’s not a lot of traffic in Payette … It wouldn’t be cost-effective to remodel where we were at and the building was too small anyway.”

The Payette dealership was a 12,000 sq. ft., four acre facility. The Fruitland dealership is 31,000 sq. ft. on an 11 acre lot, three acres of which are still available for future development.

Another factor in his decision to move to Fruitland was visibility.

“Even though it’s an internet-driven world, you still have to have drive-by traffic. It’s important.”

Among the features of this new dealership are spaces to display up to seven different models inside the showroom, a main waiting area with television and fireplace, a refreshment center and a separate waiting area especially for kids, an expanded parts and service department and vehicle service lanes, which Dominguez said are ideal for access by senior citizens. The vehicle drop-off area includes rolling doors to keep inclement weather out.

“When customers come into see us, and it’s raining or snowing or whatever, they never have to get out of their car in the elements,” he says. “They can drive right in and come into a climate-controlled environment to do their business.”

Opening the new dealership in the wake of novel coronavirus COVID-19 has had its challenges, which Dominguez said the dealership has met.

“We are completely compliant with the rules of the CDC, making sure our customers have a safe and healthy place to do their business in,” which include hand sanitizer stations and spacing of furnishings to ensure social distancing. He also said every vehicle coming in for service gets sanitized as well.

“It is a challenging time for everyone, as you know,” he said. “We were lucky enough to stay open and our business, although we’ve had some challenges through this, overall we’ve done fine.”

The dealership is also designed with energy-efficient lighting and eco-friendly materials, to minimize its environmental impact. The dealership was designed by CSHQA, an architecture firm in Boise, in conjunction with Gensler Architects of Detroit, Michigan, and has worked with Idaho Power to upgrade outdoor lights at other Hometown facilities to LEDs.

“Anything we can do to make sure our dealership was environmentally sound that was cost-effective, we did.”

One thing which kept Dominguez from fully leaving the Payette location right away was the collision center, which has kept operating at Payette while Dominguez awaited approval for the new center at Fruitland.

“We built a new state-of-the-art collision center in Fruitland; We’ve had a difficult time getting approval from the Fire Marshal, which we just got approval [on June 10] to proceed,” said Dominguez. “Hopefully [this week] we will have our sprinkler inside of our paint booth and get that operational within the next  week or ten days and get moved over to the new body shop.”

Dominguez said the last step in starting the new body shop is getting permits from the city of Fruitland.

Dominguez says he has hired four additional salespeople for the new dealership, and five others across parts and service and office operations.

As the dealership was a family business under Hanigan’s ownership, Dominguez says he has aimed to do the same. His son, Nick Dominguez, is General Manager of Hometown Chevrolet-Buick-GMC.

“He’s doing a fantastic job and we’re looking forward to passing down our business to generations to come.”

Dominguez expressed gratitude to the community for their support, as well as the Hanigan family.

“My family’s glad to be having the opportunity to do that, and we have substantially grown the business; We’re proud to be a member of this community and we look forward to servicing the community for many, many years to come.”

Oh wait! Just before you go...
SIGN UP FOR OUR e-NEWSLETTERS