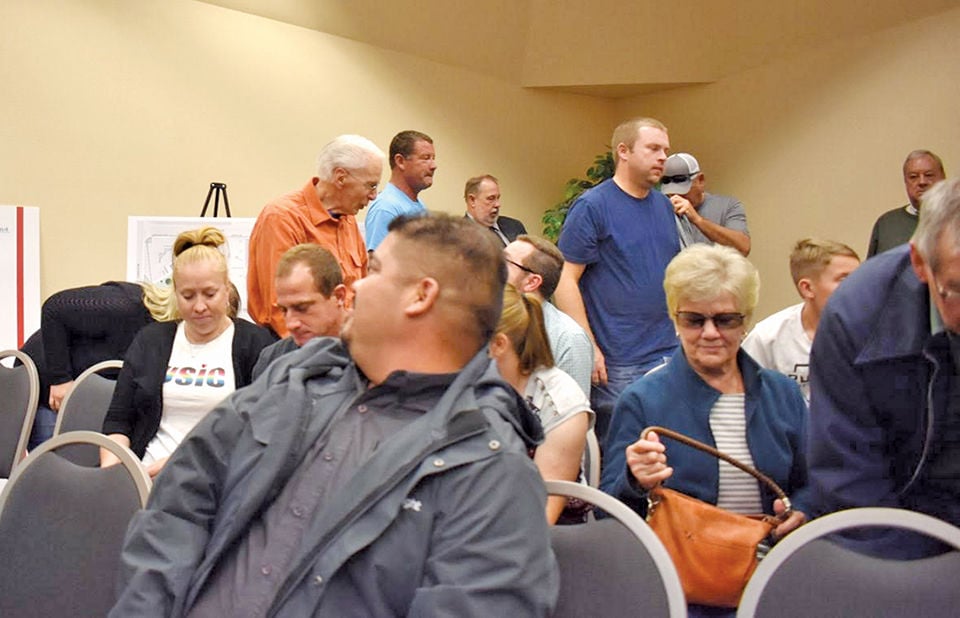 It was a packed house at the Fruitland City Council Candidate Forum, held at City Hall on Oct. 24.

It was a packed house at the Fruitland City Council Candidate Forum, held at City Hall on Oct. 24.

The forum was sponsored by the Fruitland Chamber of Commerce, citing the need to support the right to know what candidates have in mind. The forum was moderated by Annie Knudson of the Chamber Board of Directors.

When asked about their qualifications to serve on City Council, each cited their personal experience.

Jeff ‘Dale Jeffries’ Carpenter leaned on his experience serving on not only the Fruitland City Council, but also on the Ontario City Council when he lived there.

“I really love Fruitland,” he said.

Michael Moscrip, a general practice attorney, leaned on his experience managing businesses and resources, as well as his desire to put his legal knowledge to use.

“I want to see Fruitland become what we all want it to be,” he said.

Tim Davis, a general contractor who’s lived in Fruitland for 15 years, who holds a degree from Boise State, says his experience starting and running his contracting business in the face of an economic recession qualifies him. He described his experience as figuring out how to make things work.

Stuart Grimes, a teacher at Fruitland Middle School, says he spent much of his time with friends in Fruitland while growing up in Ontario.

“I’m not a politician by any means,” he says.

But that didn’t stop him taking the advice of his friends nine years ago in seeking a seat on the City Council.

Funding and growth were a common thread in candidates’ answers to the query about what they felt were significant issues in Fruitland.

Grimes cited the difficulty in finding money for city projects, with Fruitland having been reclassified as an urban population making competition with bigger cities more fierce.

Davis also sees funding as key, citing the City Hall bond measure (Ordinance no. 657) as an example of why we need to understand needs before voting on them.

“When we can see ... where the money goes, I really appreciate [that].”

Moscrip sees the need to balance the plusses of growth, such as the possible tax revenue, with the minuses, e.g. crime.

“When I take my kids to the city park, it is crowded,” he said.

He observed the need to encourage small business growth to bolster the city’s coffers.

Carpenter cited the need for City Council to be proactive and not just reactive in keeping the momentum of economic development going in Fruitland.

“Funding affects everybody,” he said, citing the need to get the word out on city projects.

When asked their feelings about involving residents in city decision-making, each candidate expressed a different ideas to achieve the same goal.

Moscrip would continue efforts to get the word out about city projects, be it billboards or more economical means, as he believes the people are who the government works for.

“Ultimately, the City Council is just representatives of you,” he said.

Carpenter says hearing what the people want to see done is what drives him, with his goal being to bring the information to them on their time in their choice of venue.

“We’re here for you,” he said to those in attendance.

Davis said he would want to arrange special meetings of the council, specifically for folks to voice their concerns. He also said putting the word out using leaflets included with utility bills could be a good idea.

Grimes stressed approachability and the desire for folks to vote informed.

“Part of it is just being approachable, just being out and about in the community,” he said.

One audience question sought to address the need for affordable housing in Fruitland, which can be hard to find.

Grimes, while wanting to help, said he can only try to support developers and landowners in seeing eye-to-eye and notes land prices in Fruitland are getting up there.

“There’s some things we can’t control,” he said.

Moscrip, in his efforts to bring affordable housing to Fruitland, has observed some of the regulatory and approval processes need reworking.

“This is delaying the process of developers,” he said, adding that his goal is to streamline the process and make it worth the money.

Carpenter said the city’s laid groundwork for affordable housing through the zoning process, but agrees that beyond being supportive of developers the city accepts that all else must happen on its own timetable.

Davis agreed with Moscrip on making things cost-effective for developers who are willing to take the leap of faith here.

“We need to level off and make things affordable,” he said.

For those heading to the polls, rather than casting mail-in or absentee ballots, the consolidated election is Tuesday, Nov. 5; information on polling places is available at the County Clerk’s office.