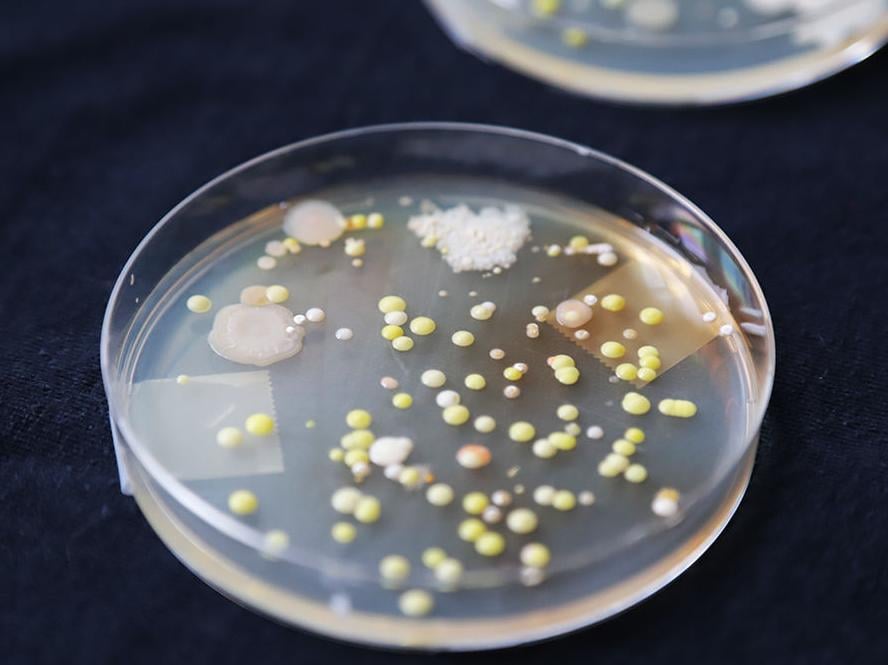 A plate filled with agar grows multiple bacterial colonies indicating how dirty the surface of a DVD is that was rented from a Redbox kiosk at Walmart in Ontario on March 24. 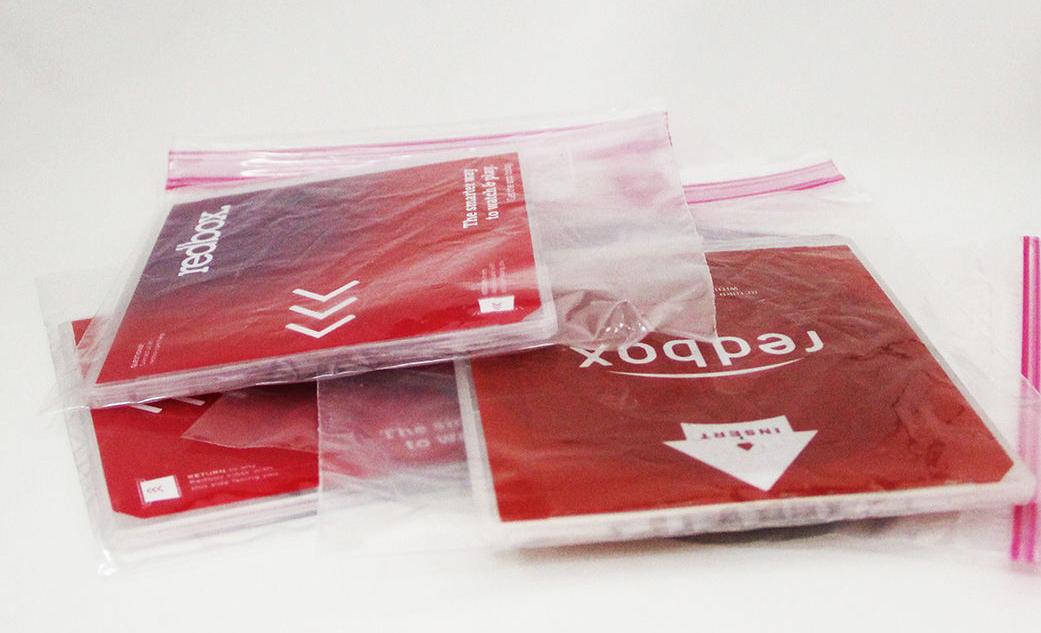 The Redbox movies used for the experiment were individually packaged in resealable plastic bags.

The control for the experiment was two commonly-used spots in the Argus Observer office. On the left is a doorknob and the right is a faucet knob.

This photo shows the cultures from the Red Apple G-rated movie. On the left is the disc and at right is the case.

This photo shows the cultures from the Walmart R-rated movie. On the left is the disc and at right is the case.

Local professional journalism is not free. In the effort to inform during COVID-19 we're providing this story for your benefit. Please join us, subscribe now.
1 of 7

A plate filled with agar grows multiple bacterial colonies indicating how dirty the surface of a DVD is that was rented from a Redbox kiosk at Walmart in Ontario on March 24.

The Redbox movies used for the experiment were individually packaged in resealable plastic bags.

The control for the experiment was two commonly-used spots in the Argus Observer office. On the left is a doorknob and the right is a faucet knob.

This photo shows the cultures from the Red Apple G-rated movie. On the left is the disc and at right is the case.

This photo shows the cultures from the Walmart R-rated movie. On the left is the disc and at right is the case.

ONTARIO — With many people stuck inside all day due to concerns about the spread of the novel coronavirus COVID-19, there are a lot of people spending the time watching their favorite shows. With the pandemic spreading, numbers of people streaming on Netflix and YouTube skyrocketed to the point that Netflix had to ask people to stop streaming shows in high definition, as it was straining their servers and people were getting slow service.

While Netflix and other online platforms are struggling to keep up with the demand of those quarantined at home, Redbox is another option for those who are looking to watch movies.

But Redbox — which offers rentals of DVDs, games and Bluray at kiosks throughout the area — comes with its own concerns: needing to physically pick up movies and worrying about contamination from the product itself.

While the Centers for Disease Control states that the main spread of COVID-19 is from person-to-person contact (touch and/or respiratory droplets), there is also worry that the virus is transmittable after touring contaminated surfaces.

“It may be possible that a person can get COVID-19 by touching a surface or object that has the virus on it and then touching their own mouth, nose, or possibly eyes, but this is not thought to be the main way the virus spreads,” states the CDC website.

In a study from the National Institutes of Health, CDC, University of California, Los Angeles, and Princeton University scientists published in the New England Journal of Medicine showed how the coronavirus will survive on different surfaces. According to the study, cardboard and copper were the lowest in terms of virus transmission possibilities (this is presumed because of the porous nature of cardboard and the atomic makeup of copper).

This is why the virus also doesn’t survive on newsprint, which is far more porous than cardboard.

Meanwhile, researchers found that the virus can survive on smooth, non-porous surfaces, such as plastic and stainless steel for up to three days. However, the virus loses half of its potency every 66 minutes, the study concluded, saying that the viability of the virus was down to 2% after six hours.

To test out the cleanliness of Redbox movies, The Argus Observer conducted an experiment.

For the test, the Argus acquired a simple bacteria growth kit, with plastic plates containing agar in which bacteria can grown on. Then four DVDs were rented from local Redbox machines: two from Red Apple Market Place and two from Walmart.

Of the two movies that were rented from each location, one was a kids movie (rated G) while the other was for adults (rated R). The reason behind the different movie ratings was to see whether there was a difference in the bacteria present on the DVDs when handled by different people (with children being more likely to handle a G-rated movie than an R-rated movie).

The movies were rented while wearing gloves and were each sealed in their own re-sealable storage bag once rented. The DVDs never touched a surface that wasn’t their individual bag.

Each DVD case and disc was swabbed with separate cotton swabs, with the swabs then being rubbed on the agar plates. As a control test, the same test was conducted at two sites in The Argus Observer building: a commonly used door knob and a commonly used faucet knob.

The plates were all taped closed, placed in an unsealed plastic container and incubated in a cooler with a desk lamp for heat for three days.

The Red Apple R-rated movie was, by far, the cleanest. The plate that tested the disc itself showed no bacterial growth at all while the case showed minimal (10) growths, with two of them growing larger. It is noteworthy that the movie released on DVD on March 24 (the same day it was rented) so there is a chance that it has never been rented before.

The Red Apple G-rated movie was significantly dirtier. The disc showed 10 growths, with one large one. The disc had 37 growths on it, with two large black growths.

The Walmart G-rated movie was the dirtiest, the study showed. The disc had 120 bacterial growths, including three large white ones and also discolored the agar. The case had 70 growths, with 12 large white growths.

From the results, it was clear that children’s movies did show more bacterial growth than those meant for adults. It also shows that rented DVDs from Redbox machines, or any other rental service for that matter, will not be sanitized and will contain bacteria (or other organisms) from the previous patron.

The levels of bacteria will vary, however, so when handling rented items it is important to maintain that same level of caution as you would for other items.

It is important to note that the bacterial growth that was discovered on the DVDs and their cases cannot test for COVID-19. They are simply representative of the levels of bacteria present on the items.

Redbox Marketing and Communications Director Kate Brennan sent The Argus Observer a statement regarding what Redbox is doing to help keep customers safe and help slow the spread of COVID-19.

While items that are rented from a Redbox are not cleaned in the machine, Redbox is asking that customers treat the product the way they would any other product purchased from a store.

“The items in our kiosks are just like any other item on a retailer’s shelf,” the post reads. “Redox discs and jewel cases can be cleaned just like you would wash your hands - with soap and water and a soft cloth (avoid paper towels).”

Other actions that Redbox is taking to help keep customers safe in the time of COVID-19:

• Customers can rent their movies electronically via the Redbox app, making the exchange at the kiosk faster and involving less contact.

• Redbox is currently working on deploying “contactless” payment technology, taking away some contact with the machine that others are using.

All of Redbox’s response to the current COVID-19 situation can be found online: https://help.redbox.com/about-redbox/general-company-info/1900


Nik Streng is a sports and news reporter at The Argus Observer. He can be reached at (541) 823-4806 or by emailing niklass@argusobserver.com. To comment on this story, go to www.argusobserver.com.

ONTARIO — On Thursday, The Argus Observer published an experiment that took place over the course of a week in which DVDs were rented from sev…