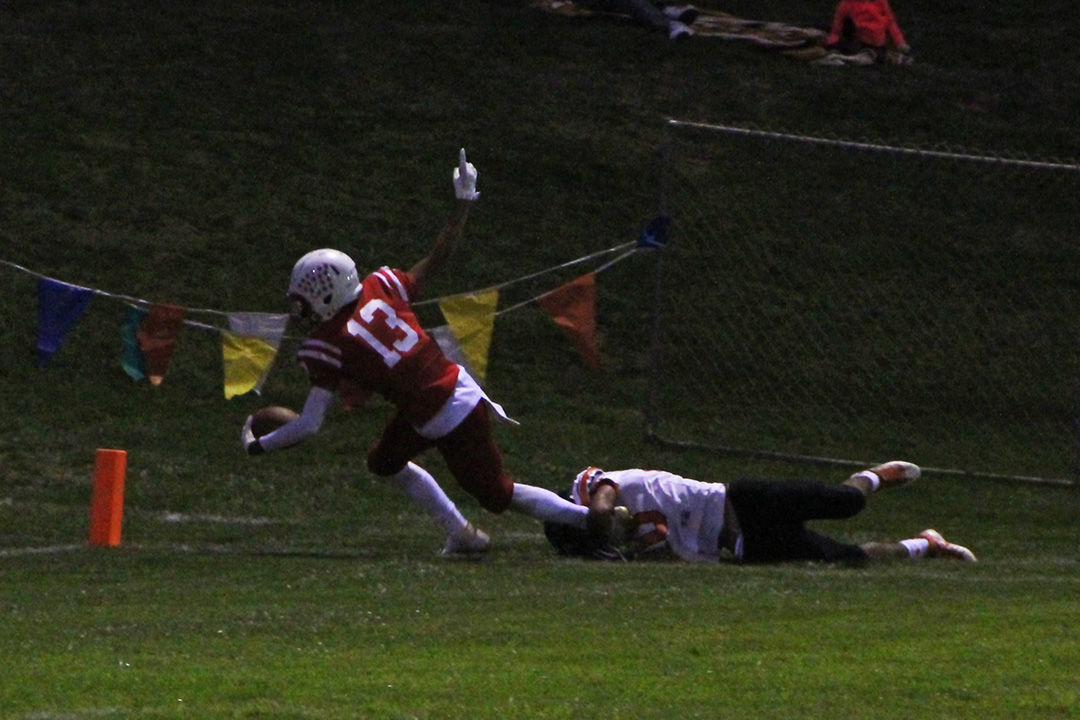 Weiser's Caleb Harris (13) throws up a finger to celebrate a touchdown catch late in the second quarter as Fruitland's Diego Carbajal attempts to pull him down. 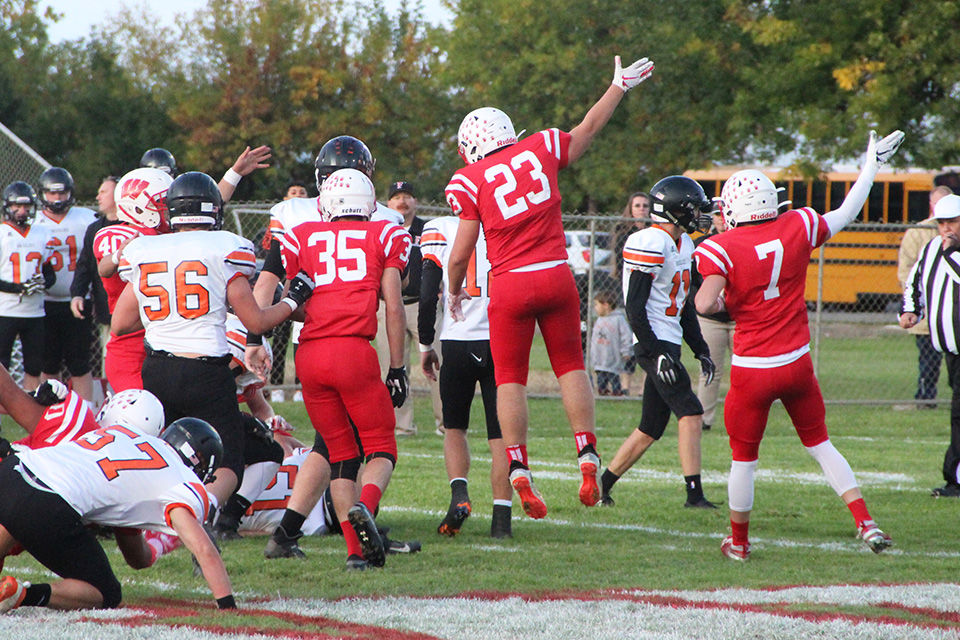 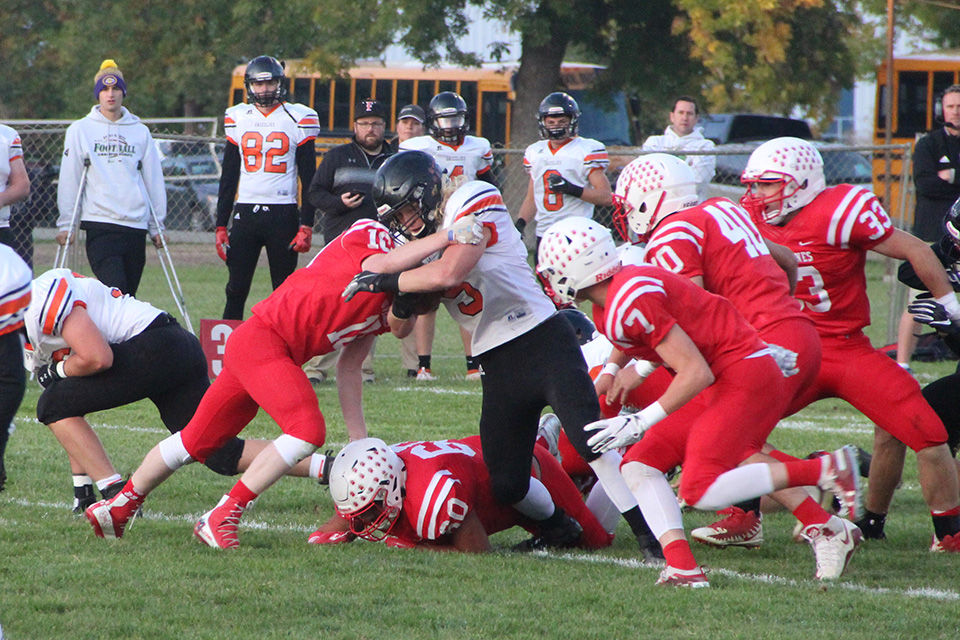 Fruitland running back Zack Ziegler, middle, tries to break away from Weiser defenders. 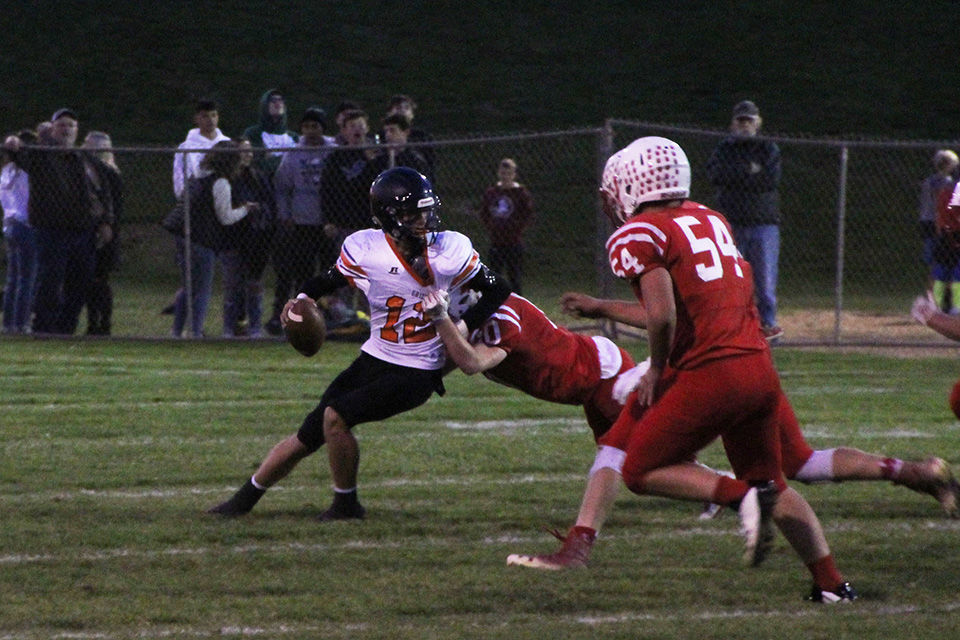 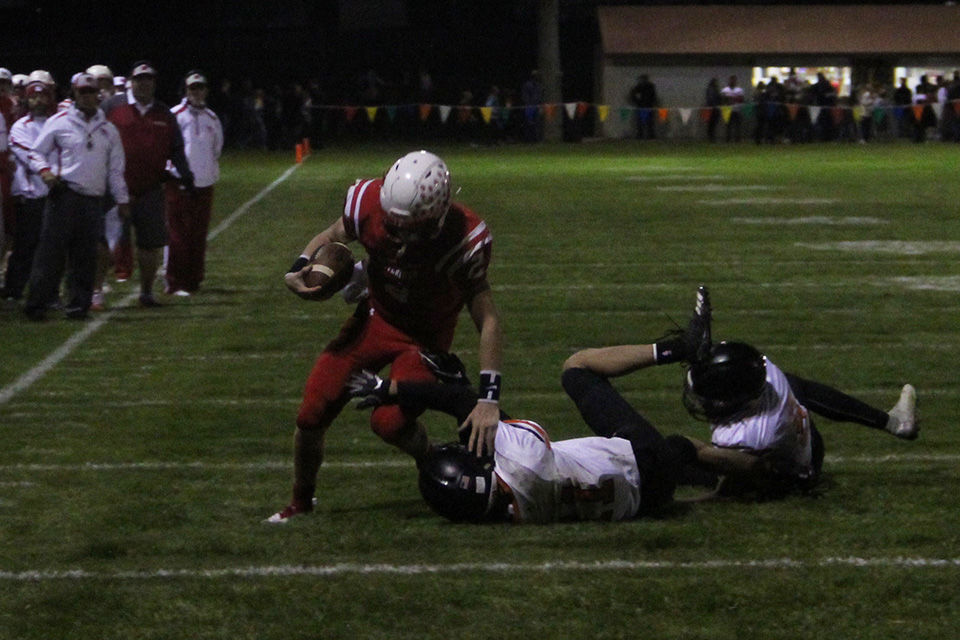 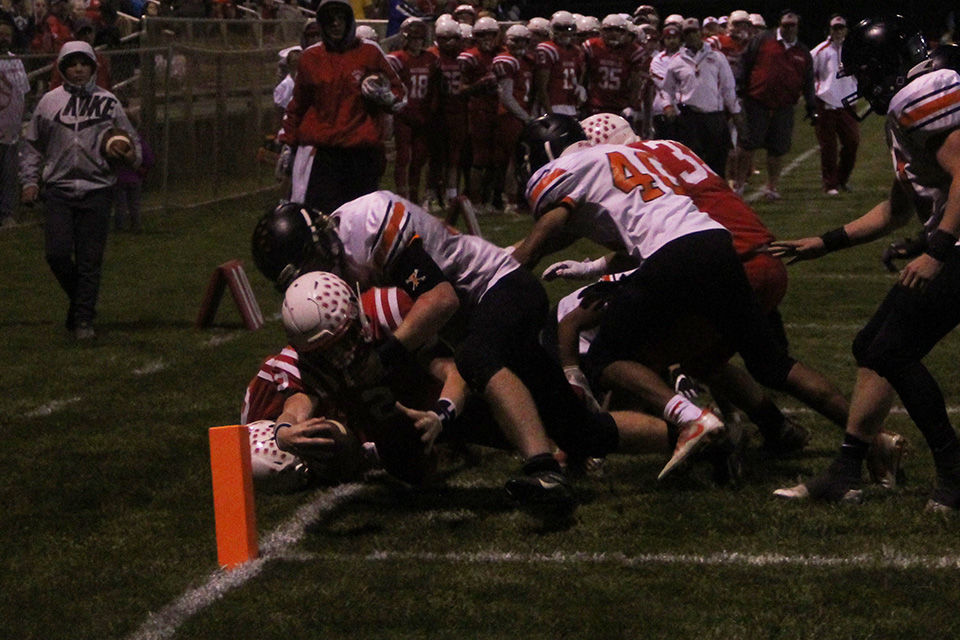 Weiser's Brett Spencer, left, stretches for the end zone as Fruitland's Greg Gissel stops him just shy of a touchdown.

Weiser's Caleb Harris (13) throws up a finger to celebrate a touchdown catch late in the second quarter as Fruitland's Diego Carbajal attempts to pull him down.

Fruitland running back Zack Ziegler, middle, tries to break away from Weiser defenders.

Weiser's Brett Spencer, left, stretches for the end zone as Fruitland's Greg Gissel stops him just shy of a touchdown.

WEISER — After the final buzzer blared in Weiser on Friday night, members of the football team grabbed the water bottles on the bench, shaking them as water flew into the stands. The Weiser fight song blared from the band as the student section chanted “break the streak.”

The significance of the game sank in. For the first time in 2005, the Weiser football team beat Fruitland.

On Friday night, the Wolverines advanced to 6-0 on the season, blanking Fruitland 35-0.

“It’s been a long time coming,” Weiser coach Tom Harrison said. “It’s just outstanding. It feels great. I feel really good for the players, the coaching staff, the community and the parents.”

While Harrison is only on year two at Weiser High School, the emotion of the night was not lost on him.

“I mean, look at this,” Harrison said, gesturing to the students crowding on the field after Friday’s game. “This is what we want. A lot of happy faces. I’m real proud of what’s going on here.”

Weiser senior Angel Magana, who had taken three straight losses to Fruitland in his football career prior to Friday, said it was vindicating to be able to go out and finally get a win.

“It feels great,” Magana said. “All it took to get here was effort from the team. We’re balling out on every play. One hundred percent.”

While he hasn’t been on the team for too long, Weiser sophomore quarterback Brett Spencer said getting the win for the seniors this year feels really good.

“We all knew about the streak coming into this game,” Spencer said. “But to be able to do it at home and on senior night, these seniors forever get to be that class that broke the streak. It’s cool just to be a part of that.”

While the final score suggests an end-to-end blowout, the game was very close in the first half. The Wolverines scored the first touchdown of the game in the final minute of the first quarter and the game looked to be close going into halftime.

With about two minutes left in the second quarter, a Weiser drive stalled at the Wolverines’ 35 yard line. The punt from Magana boomed to the opposite end of the field and was bobbled by the Fruitland receiver as Braden Edwards slid in to grab the fumble at the Fruitland 20 yard line.

After a false start penalty on the first play of the newly-revived Weiser drive, Spencer threw a pass deep to Caleb Harris, who was being guarded one-on-one. Harris pulled in the 25-yard touchdown, putting Weiser up 14-0 at halftime as the Wolverines would also receive the ball to open the second half. The score on the first drive of the third quarter made it a 21 point game.

“I just know Caleb,” Spencer said, shrugging. “He can run fast and jump high. He can run any corner out there. All the credit goes to him on that one.”

Spencer led the Wolverines with 90 rushing yards and three touchdowns on 19 carries. He also completed four of nine passes for 55 yards, one touchdown and one interception.

Harris was the recipient of two of Spencer’s passes, gaining 47 yards and the touchdown.

Layten Tolman carried the ball seven times for 35 yards and one touchdown. Jack Burke had six carries for 43 yards. In all, the Wolverines gained 228 rushing yards against Fruitland.

But where the Wolverines really shined on Friday was in the defense. One year ago, the Weiser defense gave up a late touchdown against Fruitland as the Grizzlies survived 21-14. That loss personified the Wolverines’ defense of 2018.

Harrison thanked the hard work of the coaching staff, who retooled the Weiser defense in the offseason.

“We worked really hard on defense,” Harrison said. “After last year, we knew we needed to come up with a better system on defense.”

Magana said the Wolverines have made defense an emphasis of the season, but their all-around play is about cutting out the mistakes.

“It’s pretty much showing how we work,” Magana said. “That’s on defense and on offense. We want to get it perfect every time. It’s every little thing.”